The Roots That Bind is a side quest in Horizon Forbidden West.

Your objective is to help Kue retrieve some metal and defend the village from the Tenakth.

Here’s a walkthrough of The Roots That Bind in Horizon Forbidden West.

Recommended level is 15 and above.

To begin the quest, head to Plainsong. The exact location is shown in the map below. 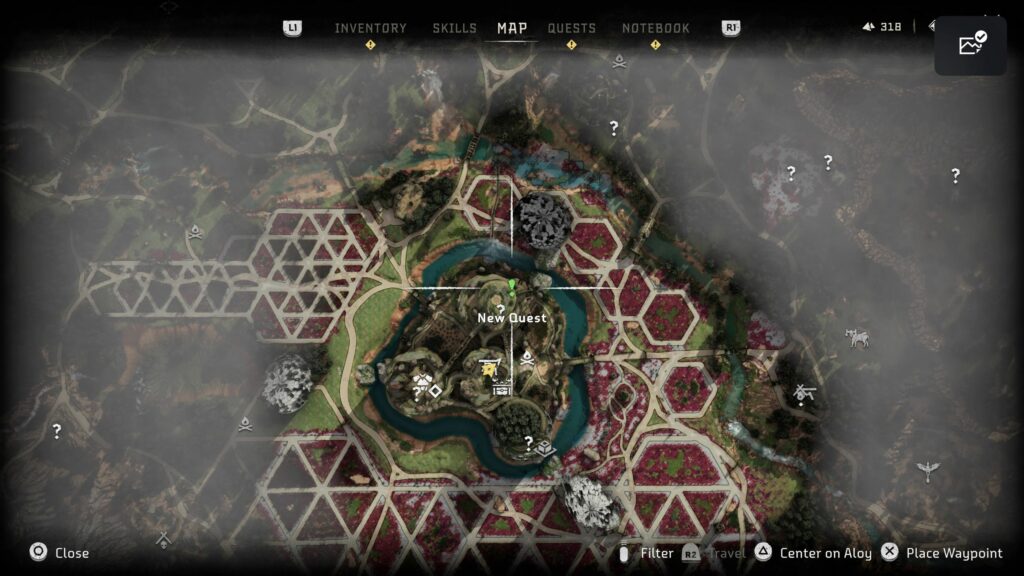 You’ll find Nel at the uppermost part of Plainsong. Talk to her to begin. 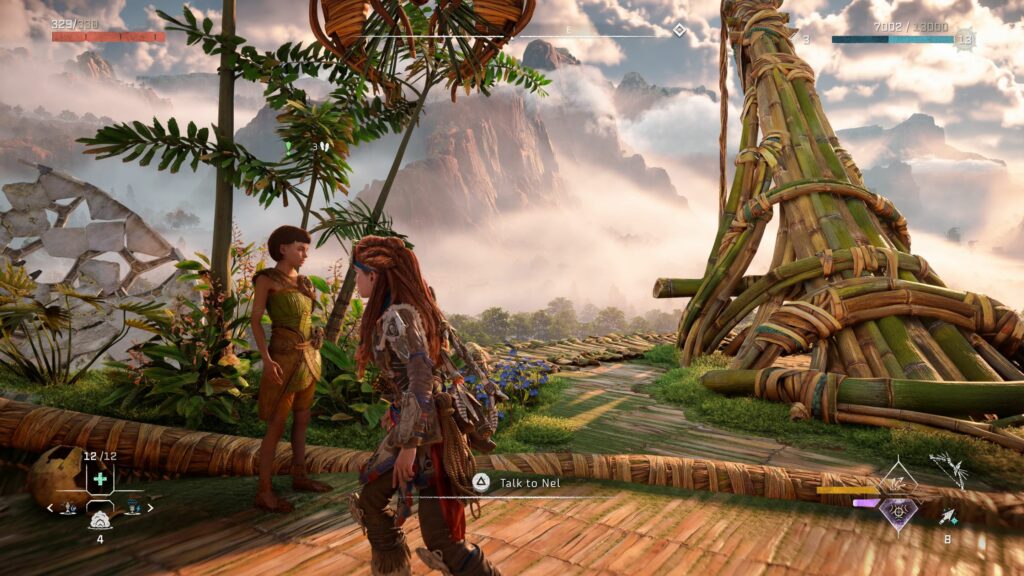 Next, go north to Riverhymn. The location is shown in the map below.

As you arrive at Riverhymn, you’ll see some Tenakth Rebels attacking the villagers.

Take them all out. You can stealth kill a few of them that are facing away. 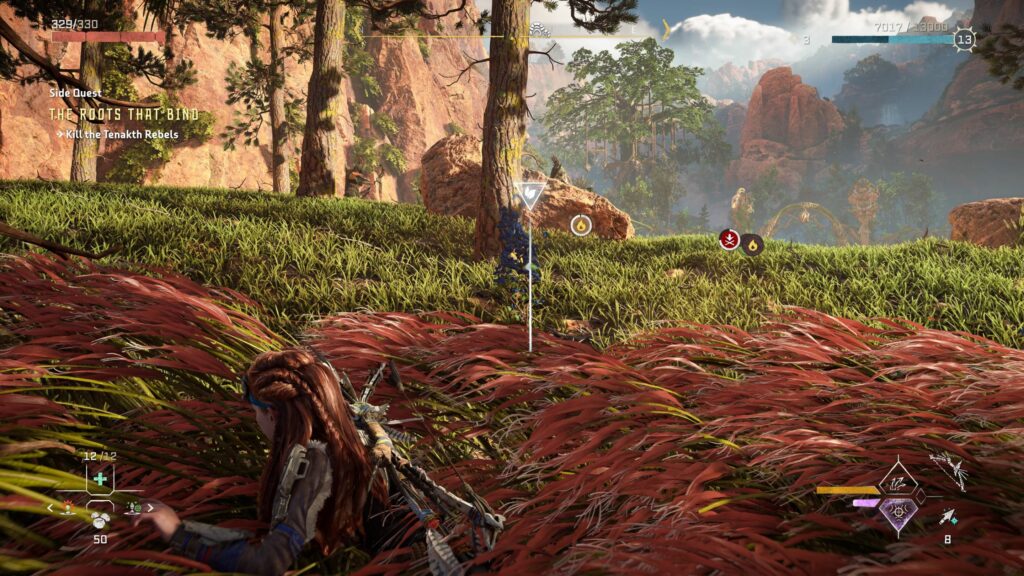 After the battle, follow Kue as he tells his story. 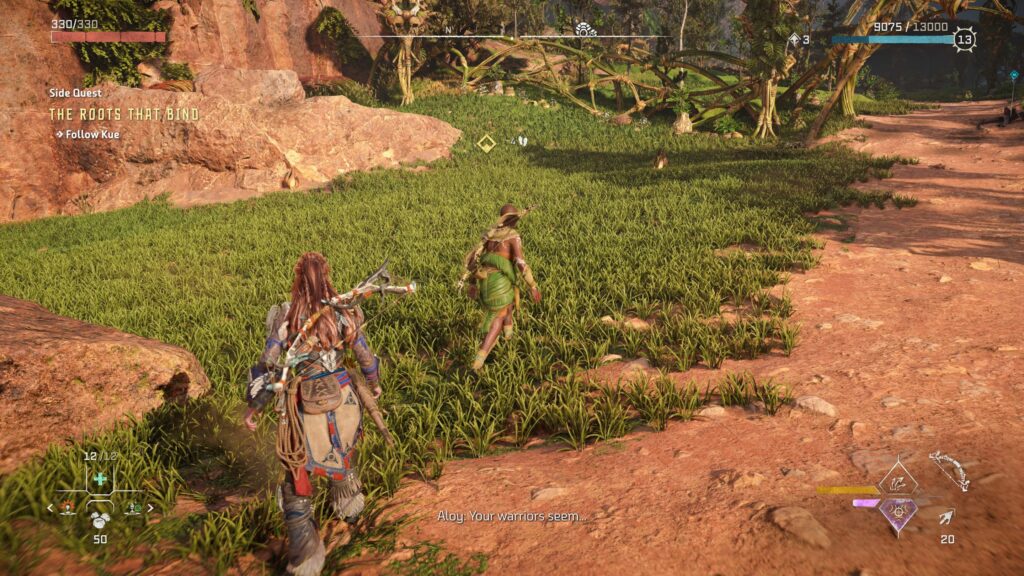 He will then ask you to follow again to the entrance of the Drumroot. 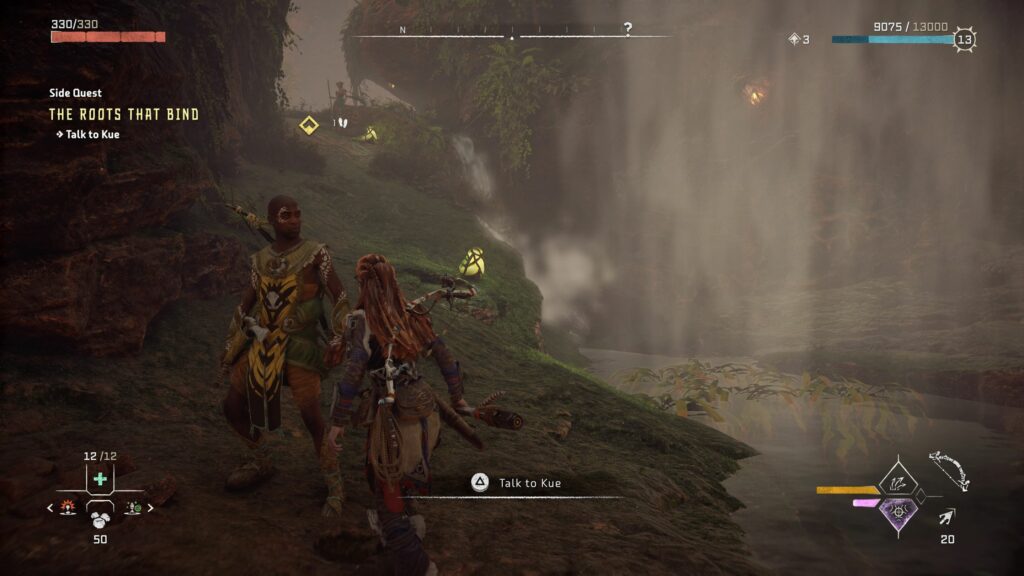 Go to the top of the Drumroot

Follow the path until you reach the waterfall. Use focus to see the markings you can climb on. 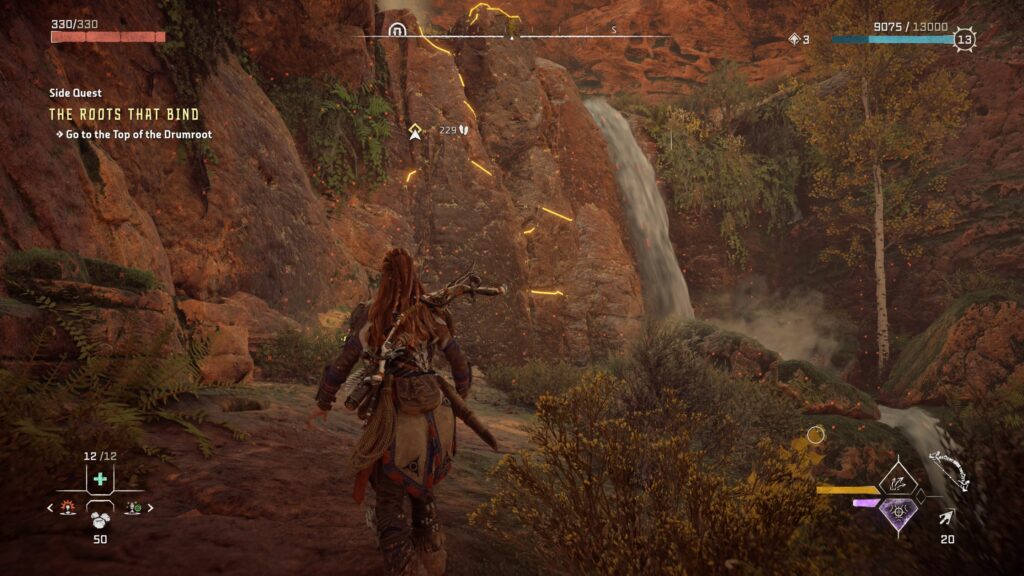 Keep going until you enter the cave.

Inside the cave, you have to dive into the water. There’s a giant tunnel underwater that you can swim through. 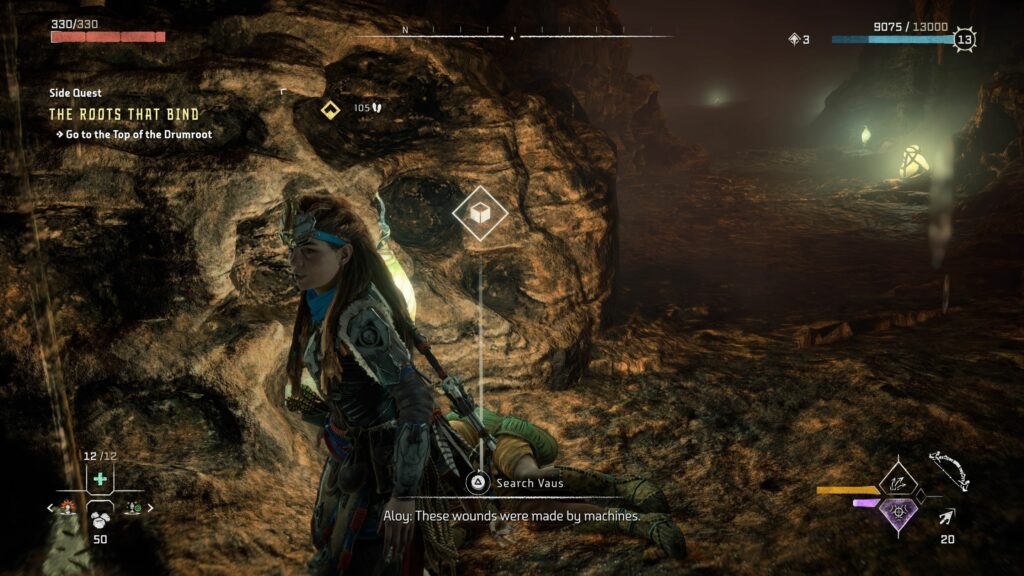 Then, take out the two machines in the area. You can shoot at the mushrooms to make them lose sight of you temporarily. 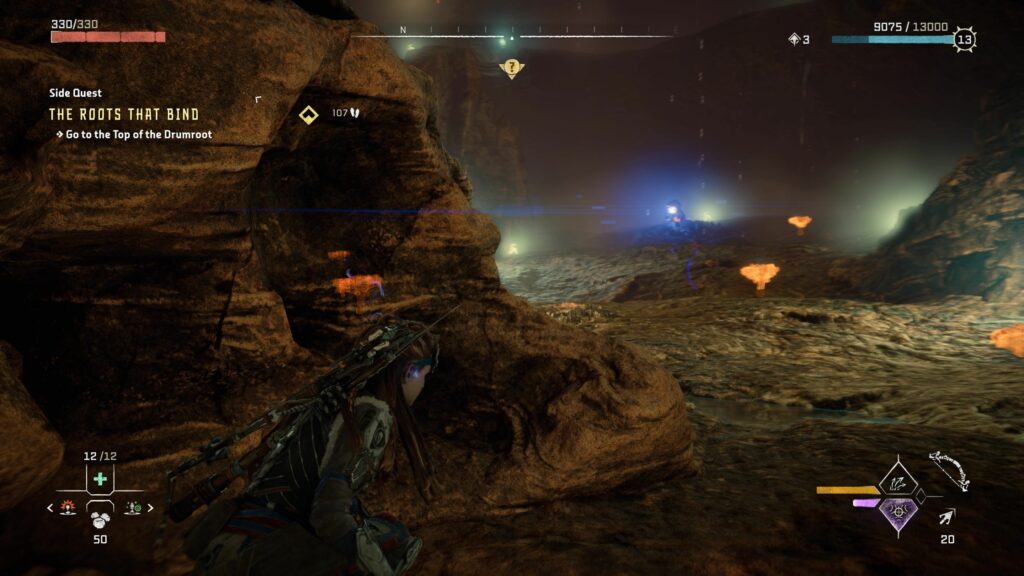 After defeating the machines, climb up the rock in the middle and continue your way up. Go around the area. 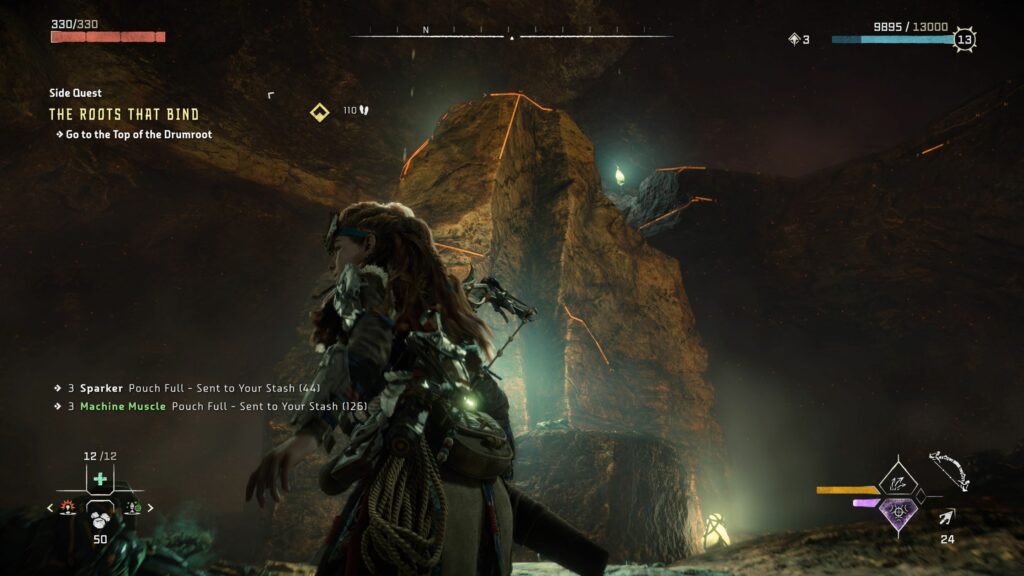 You’ll then reach the spot where you first arrived.

Lower the ladder in front of you first, in case you fall down later.

Then, jump straight towards the rock in the middle. Use focus to see the markings before you jump. 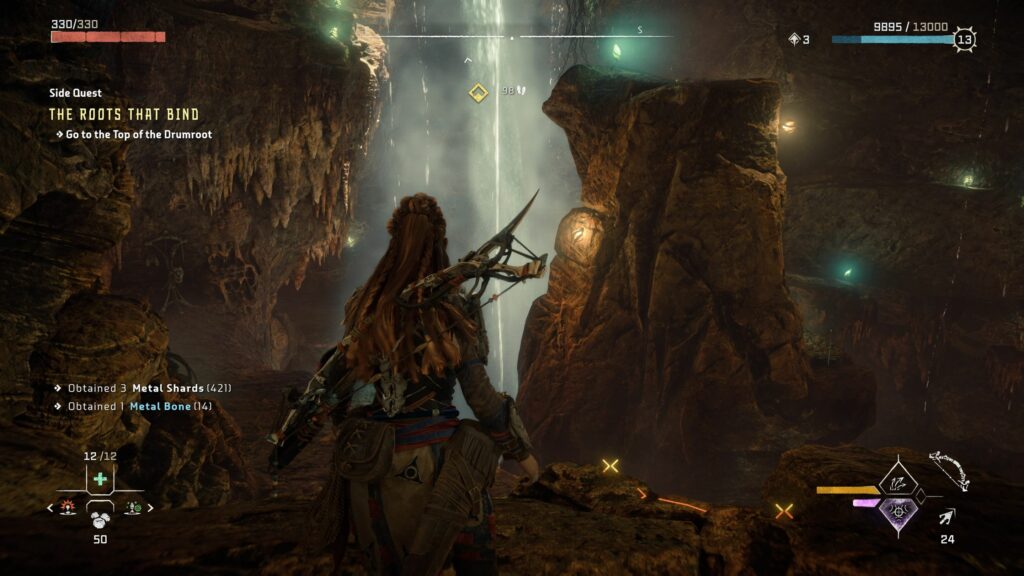 From the rock, continue going to the left. 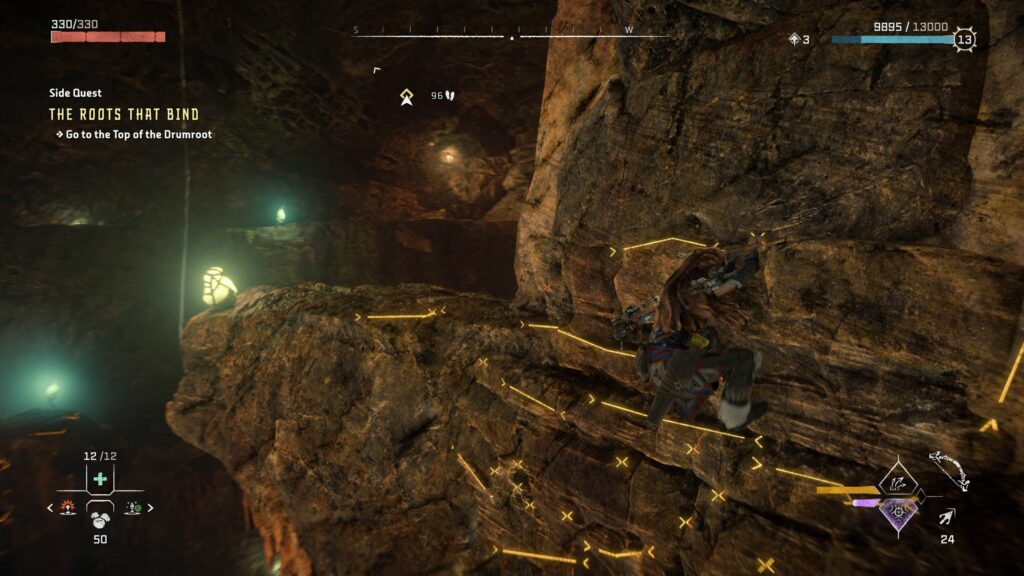 Then, jump towards the other rock in front of you. 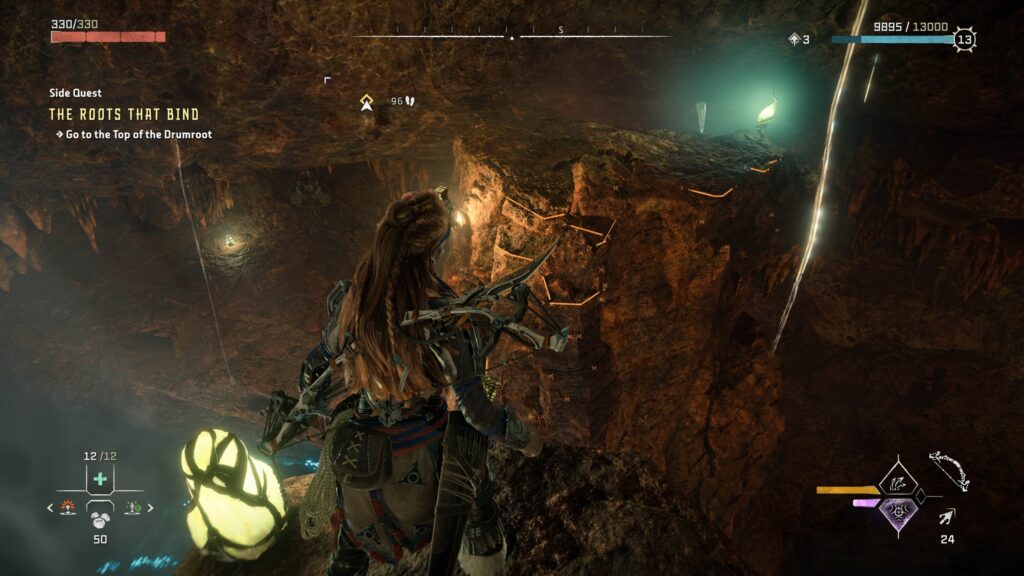 From this next rock, look up and you’ll see a grapple point. Jump and grapple to the higher platform. 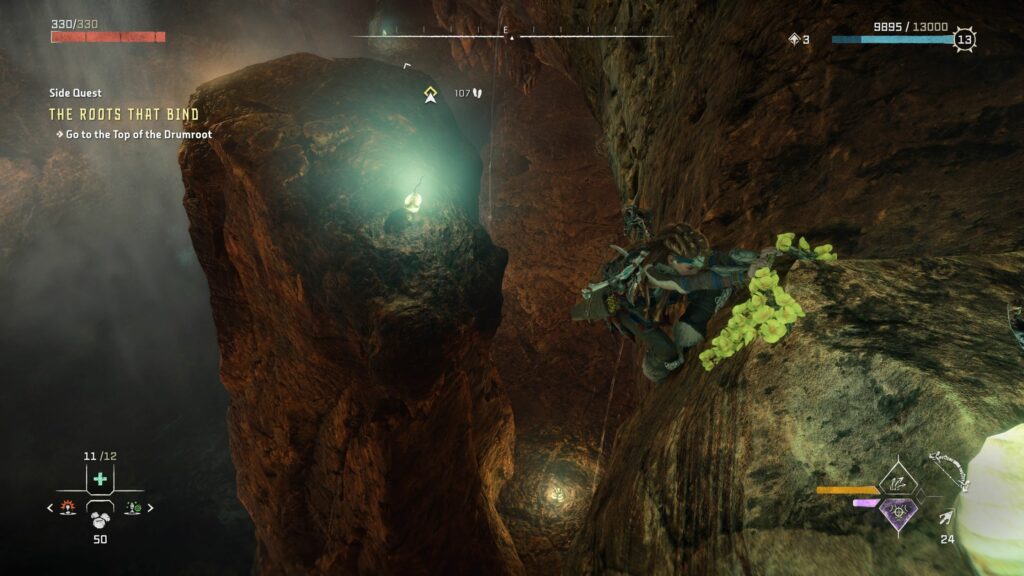 Then, follow the path and you’ll see a way to climb towards the right side. 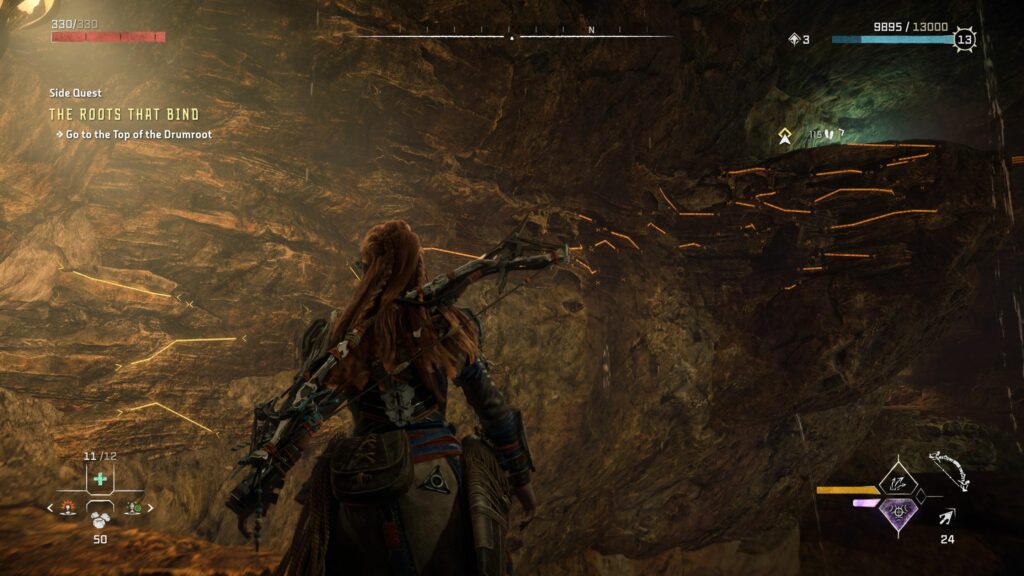 From the top, you’ll see a beam you can walk on. From the beam, jump to the lower rock directly in front of you. 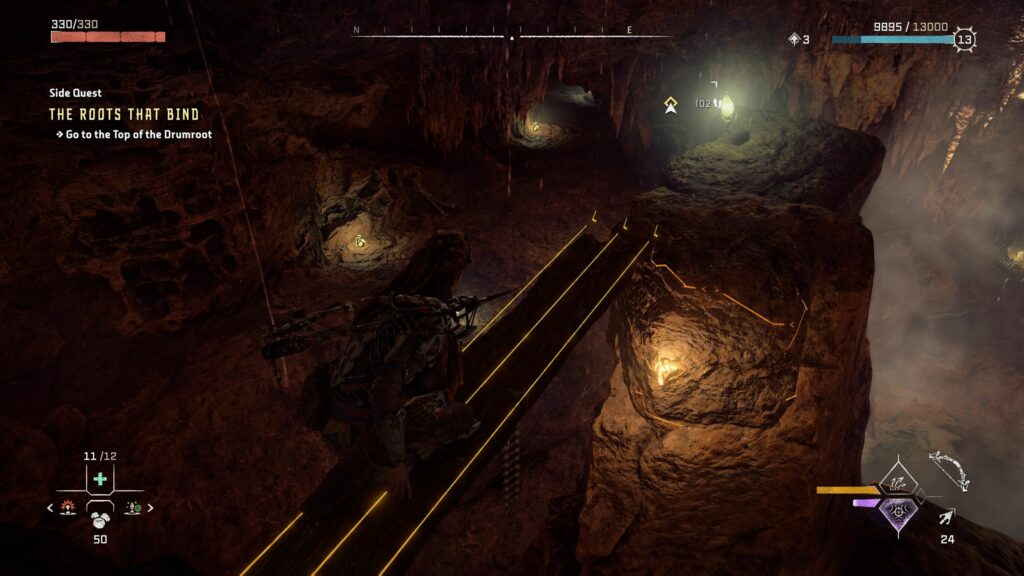 Then, you’ll have to make another jump towards another grapple point. 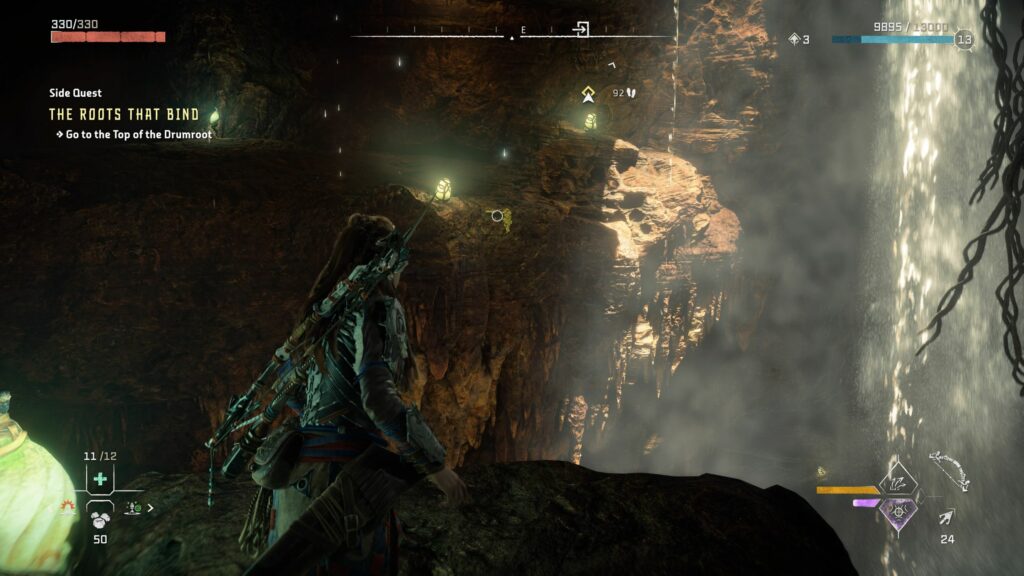 You will then see a way to climb up near the waterfall if you use your focus. 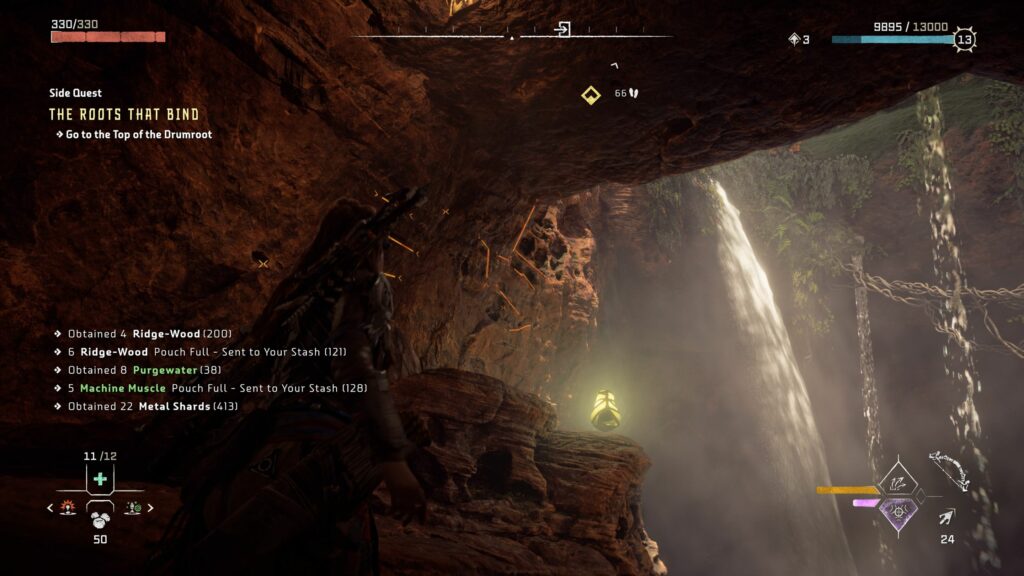 At the top of the Drumroot, you’ll see machines. Widemaw is the one churning out metal pods as it walks around the lake.

You don’t even need to fight the machine. Just stay quiet and pick up the metal pods it drops. Pick up 6 pods and you’re done. 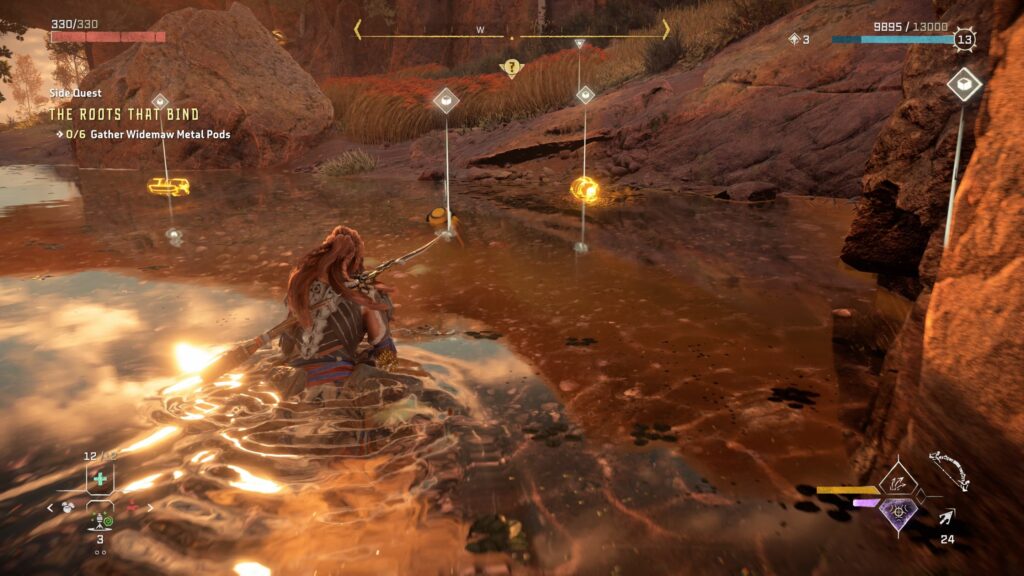 You can fast travel back to the campfire near Kue to hand over the metal pods.

Finally, you’ll be required to defeat the Tenakth Rebels with the help of the villagers. 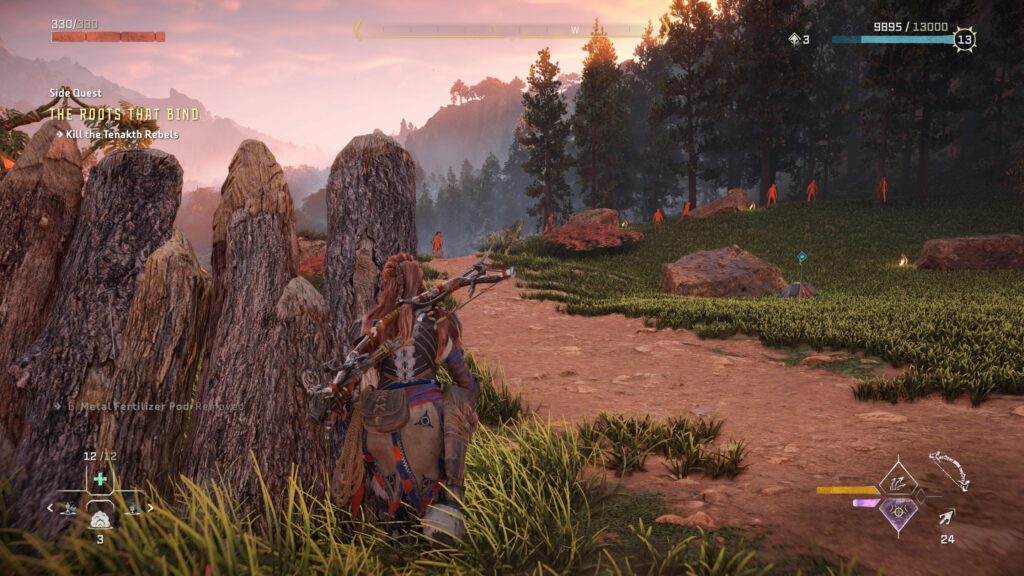 After the first wave is gone, they will come on machines. Take them down. 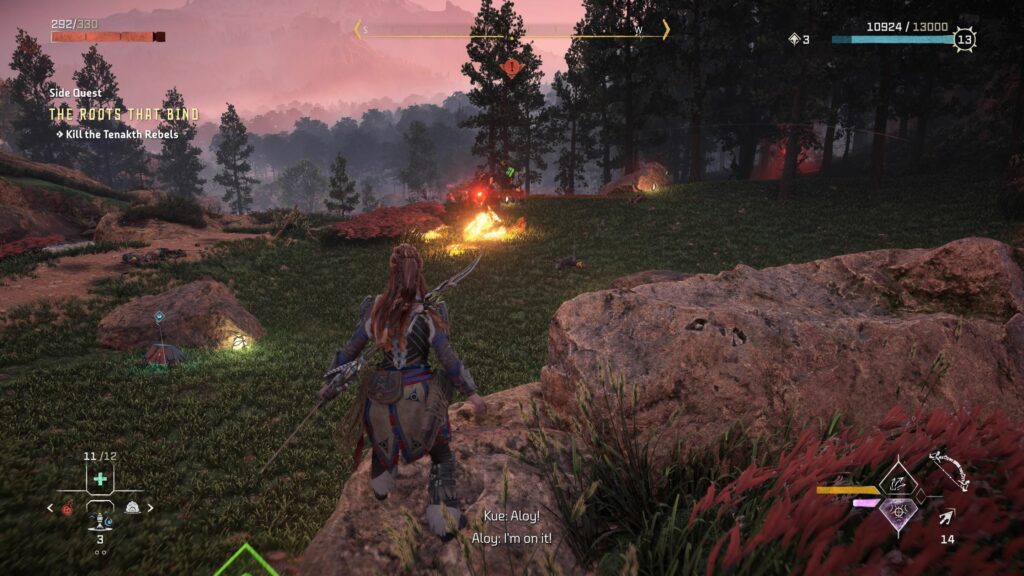