Your objective is to head to the Zenith’s base to rescue GAIA and Beta.

Here’s a walkthrough of Singularity in Horizon Forbidden West.

Recommended level is 35 and above. 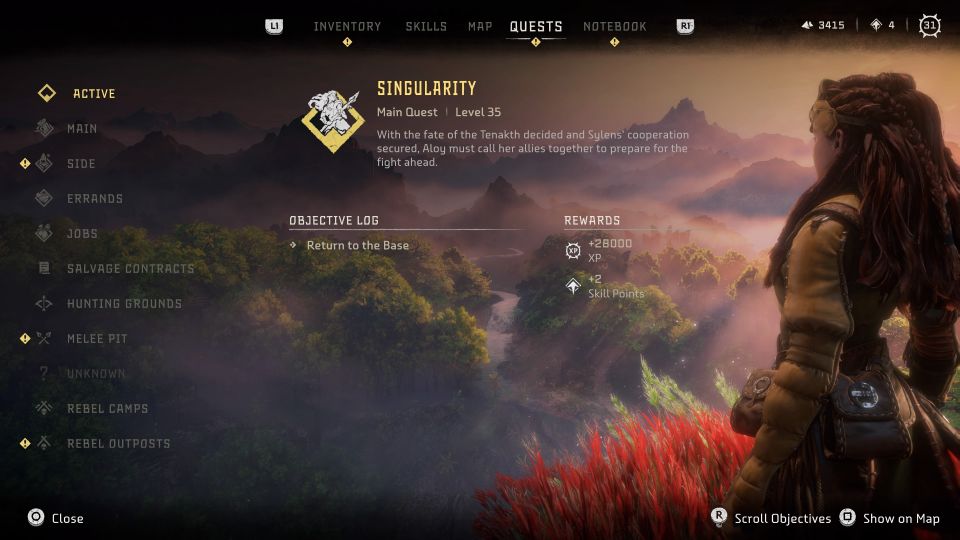 To begin the quest, talk to Sylens who will now show up in your base. 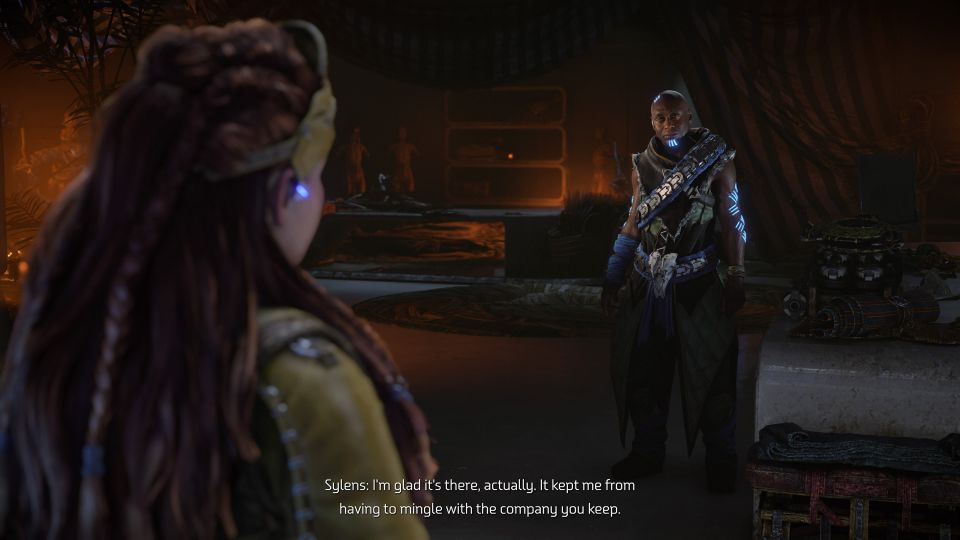 When you’re ready, assemble your companions at the control room in the base.

You may want to prepare well before the final battle. 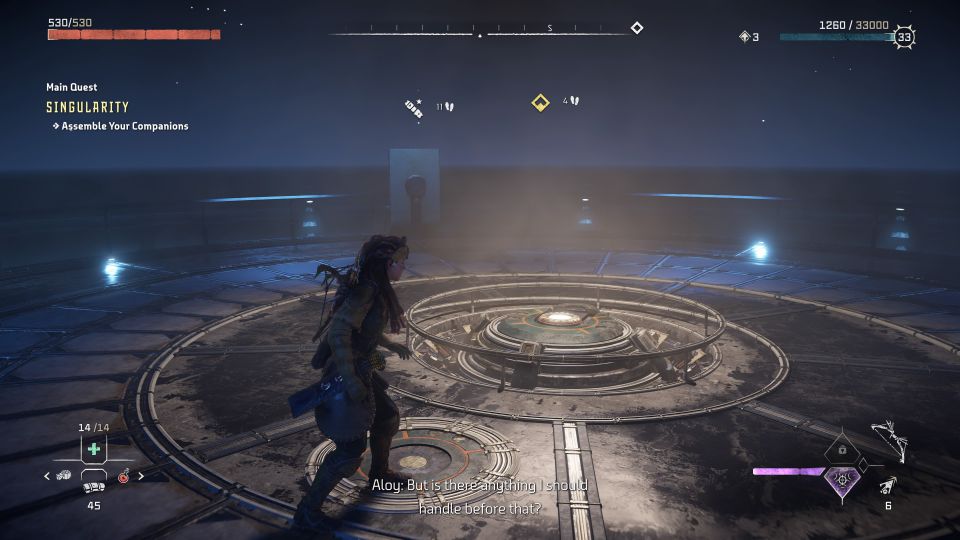 Go to the rendezvous point

You can then talk to your companions before going to the rendezvous point. 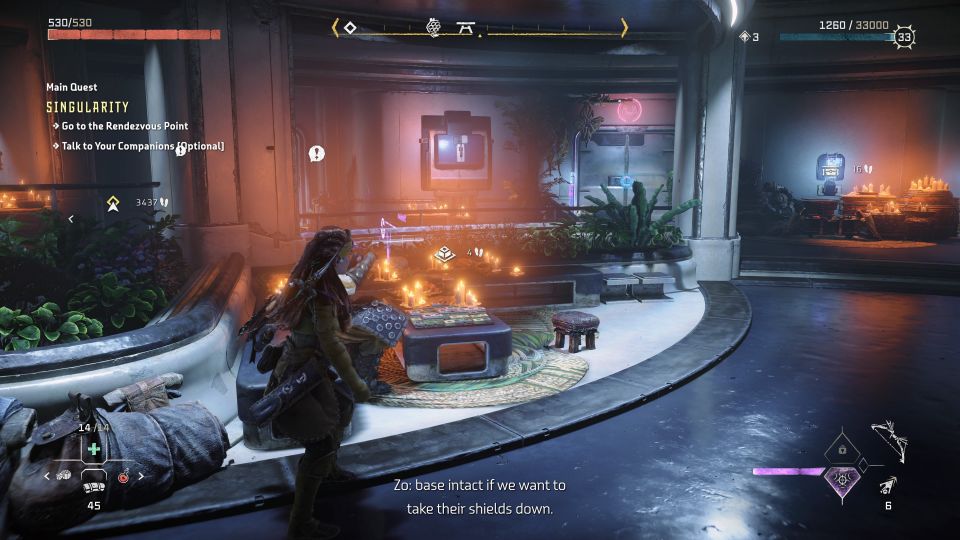 When you’re ready, go south. The location is marked on the map below. 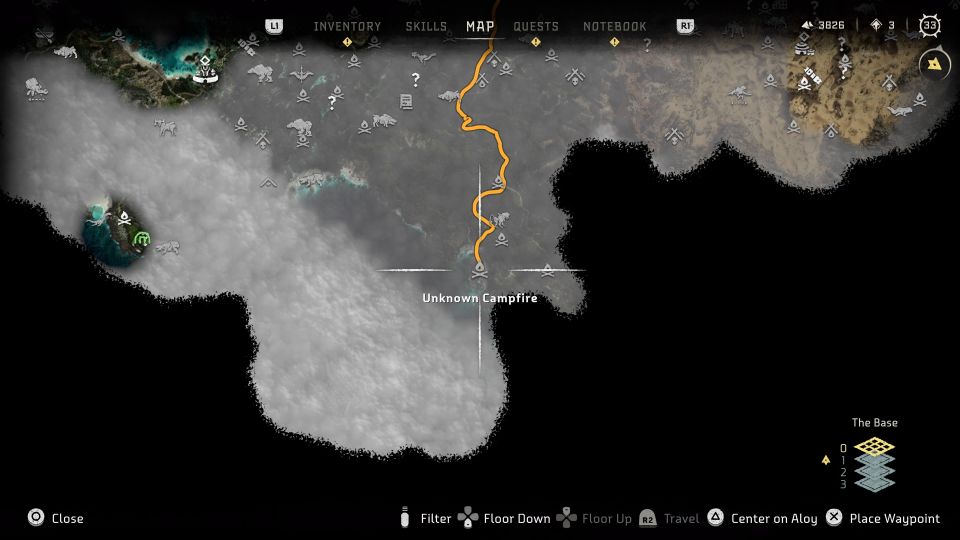 Go to the campfire there and call everyone to come. 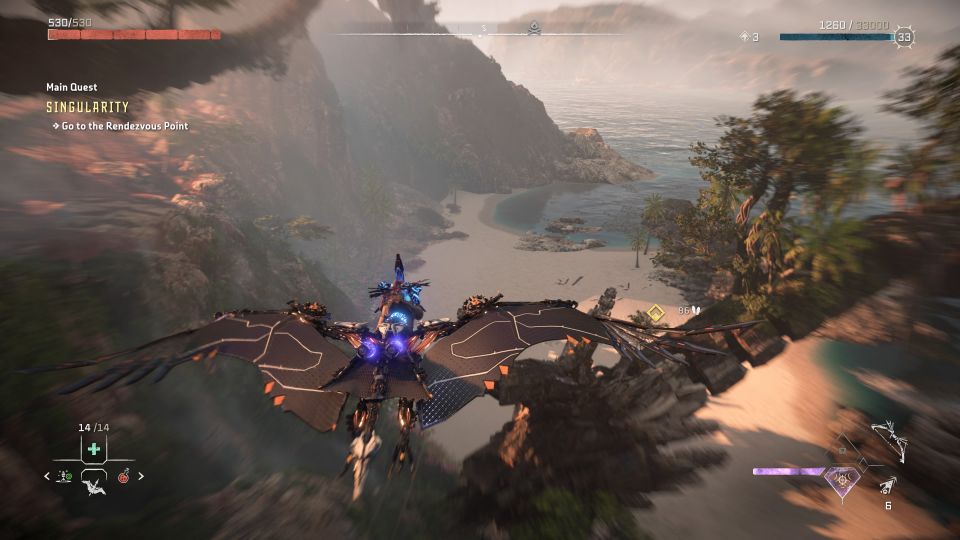 Head to the launch tower

The goal now is to go to the launch tower. The location is shown in the map below, marked by the quest symbol. 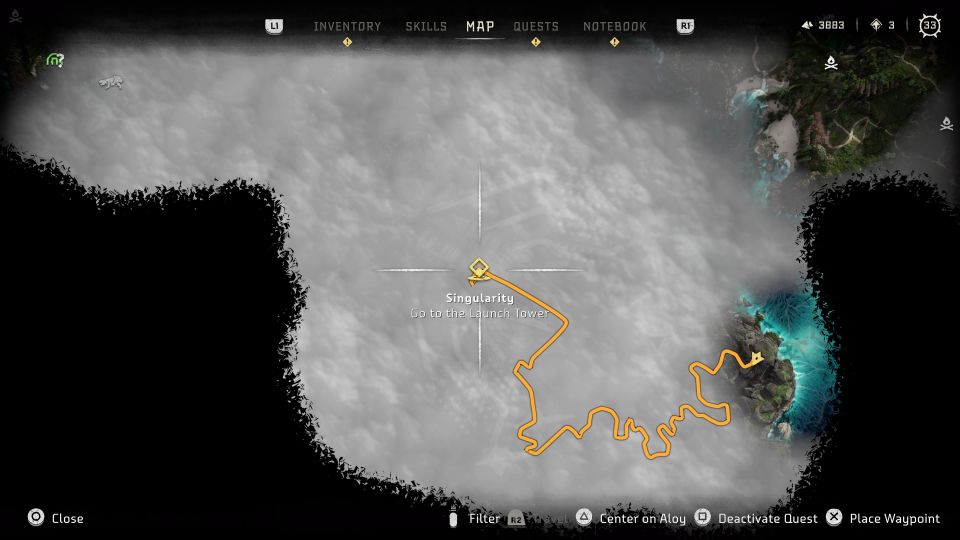 You’ll be moving there with Erend.

At the first part, there’ll be Specters. Use the bushes and you can sneak past them. 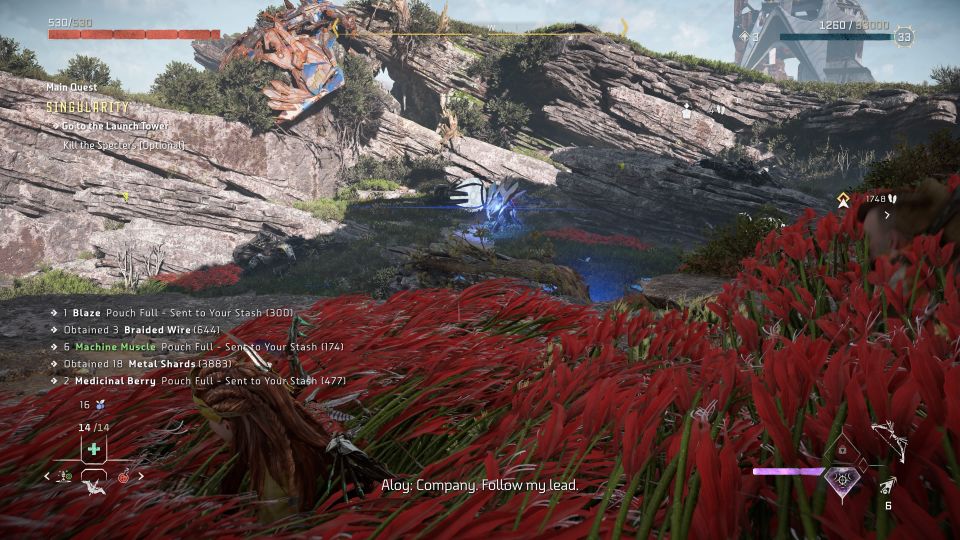 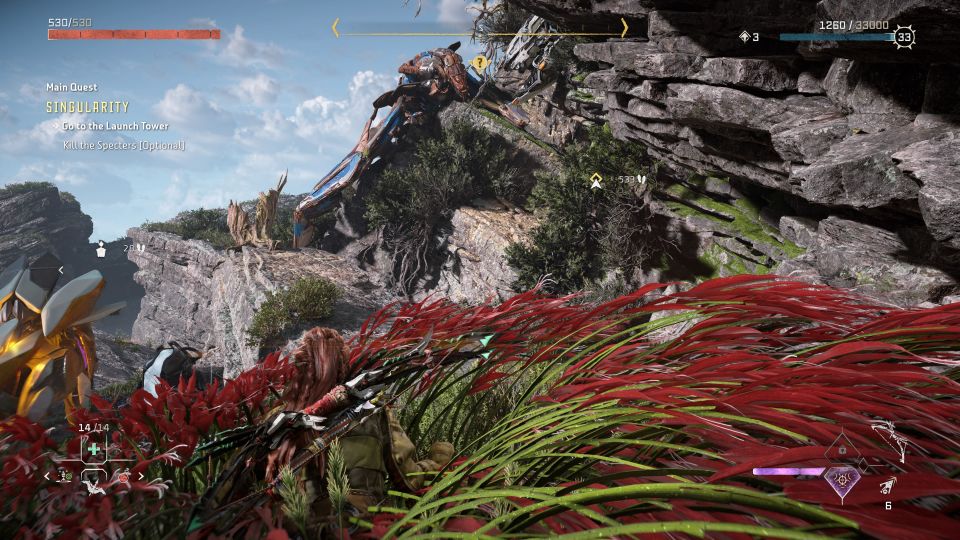 You’ll then reach a small cave. 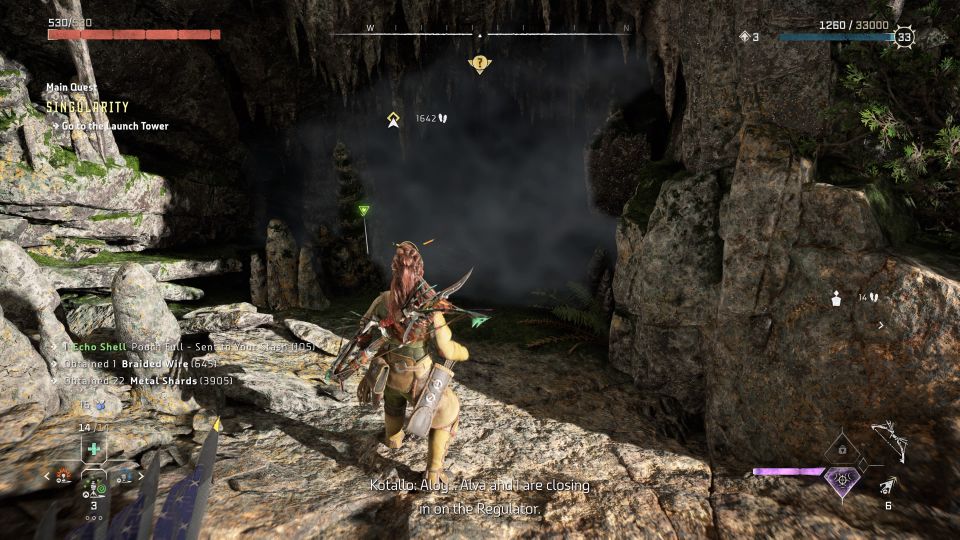 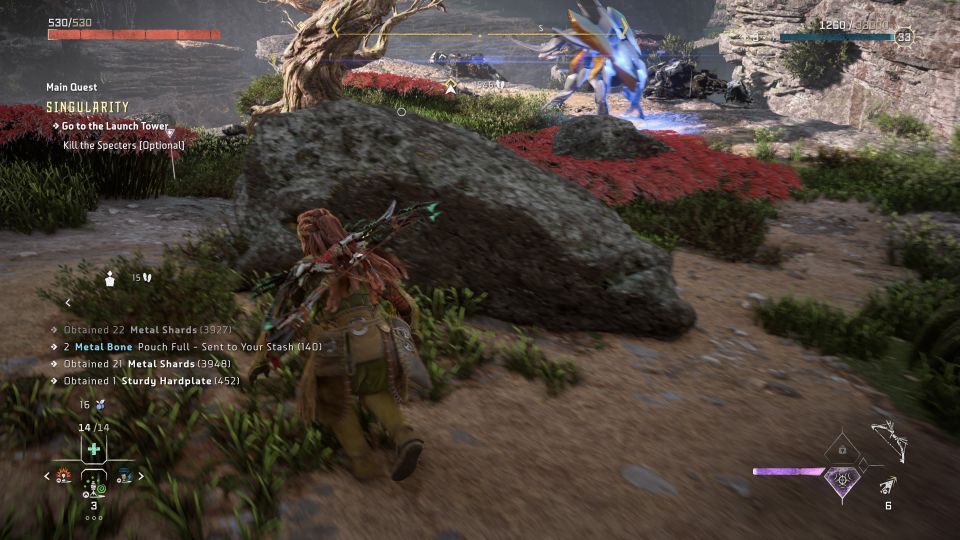 You can try to avoid them and go up to the edge of the cliff. Jump over to the other side. 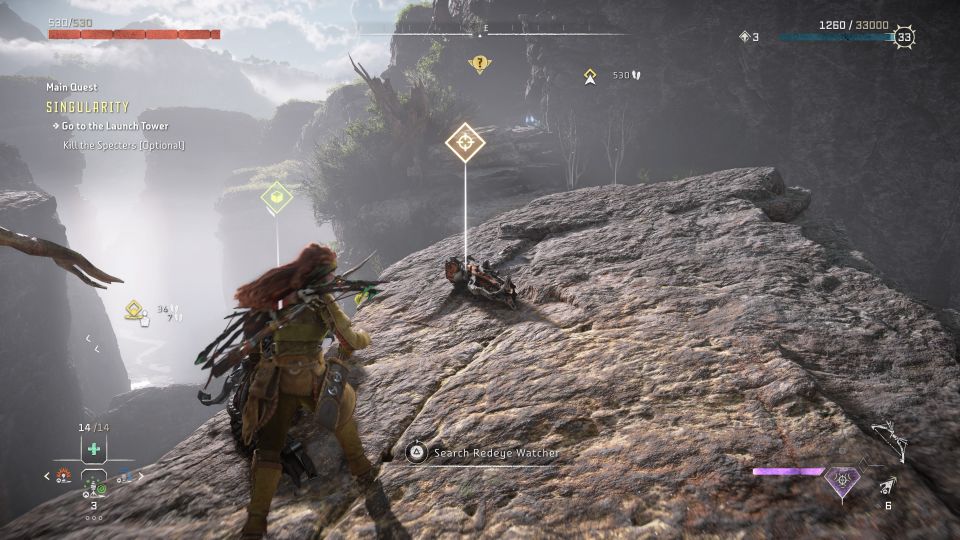 You will then reach some vines blocking the way. Use the vine cutter to open a path. 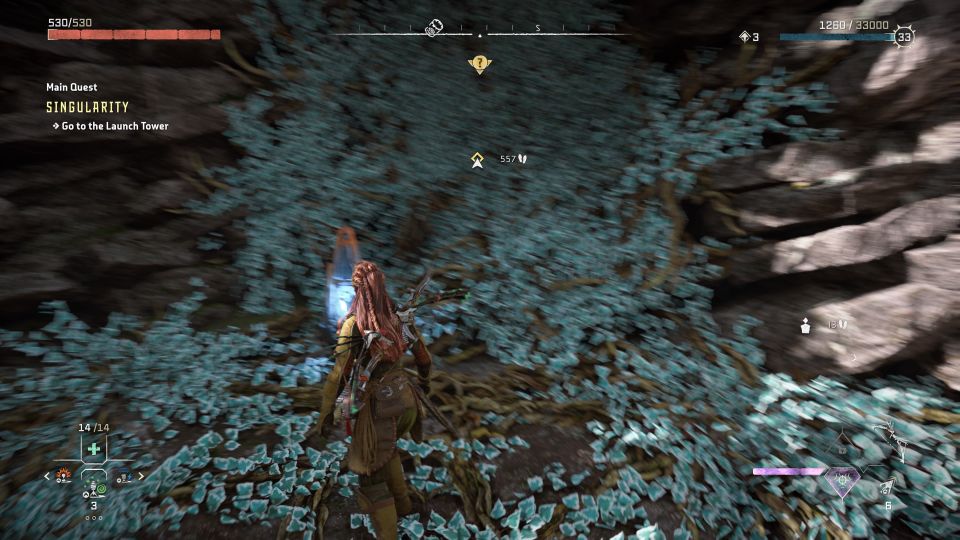 Walk over the Stormbird carcass to the next side. 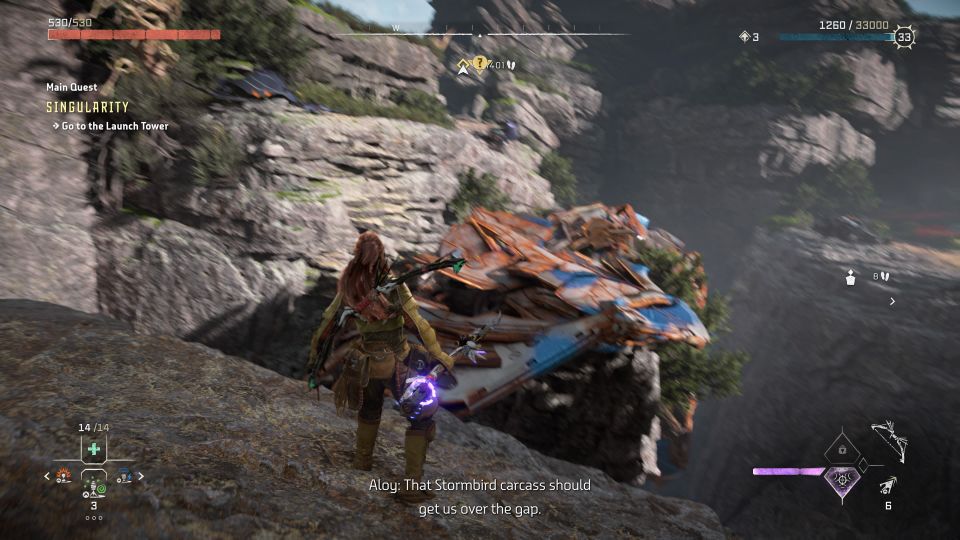 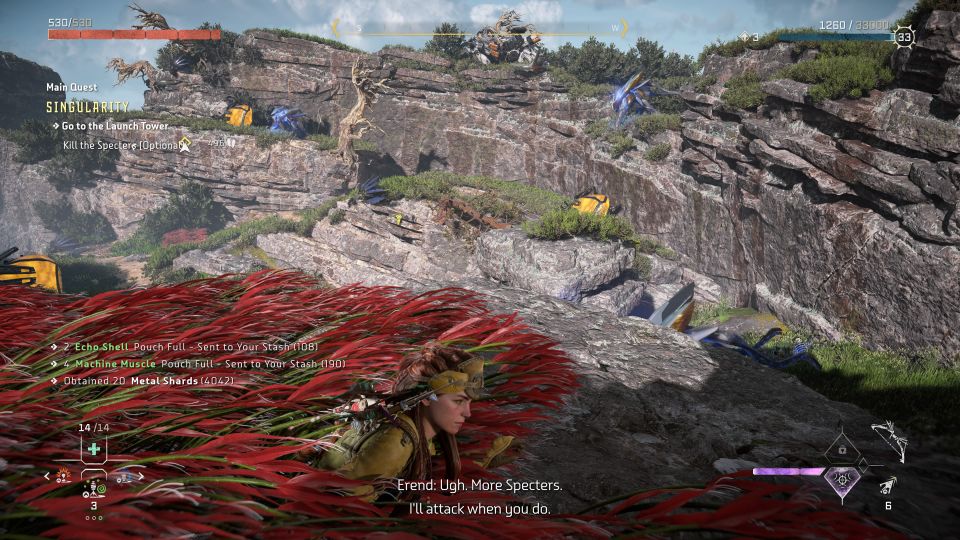 You can head towards the right side and try to avoid them.

Look for a ledge you can climb towards the side. 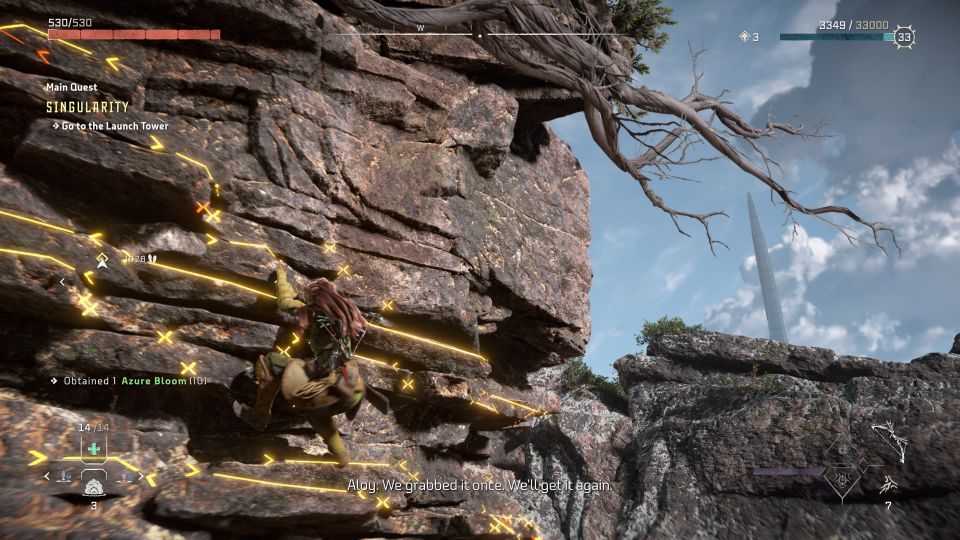 Keep going until you find a pretty obvious way forward, which looks like a giant trench. 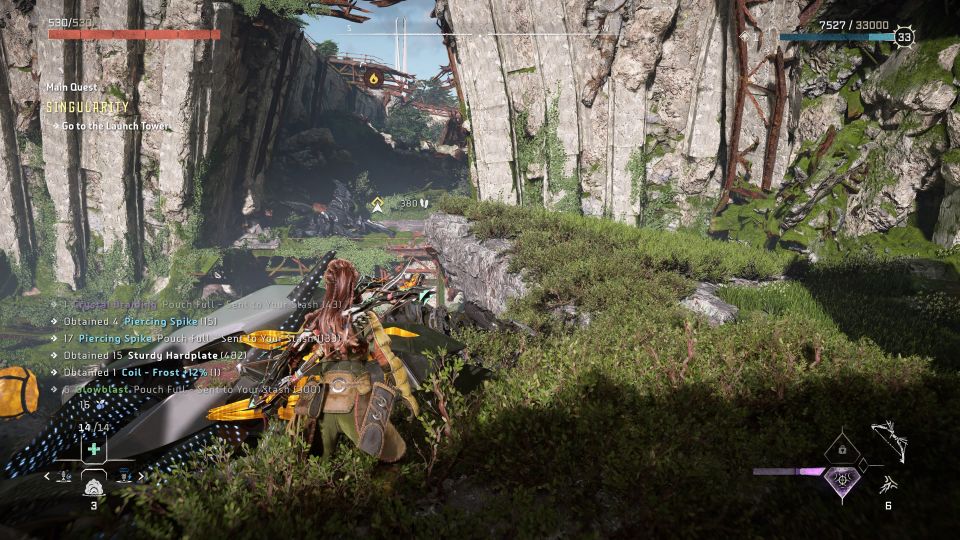 Keep going on ahead and you’ll see the launch tower in front of you. 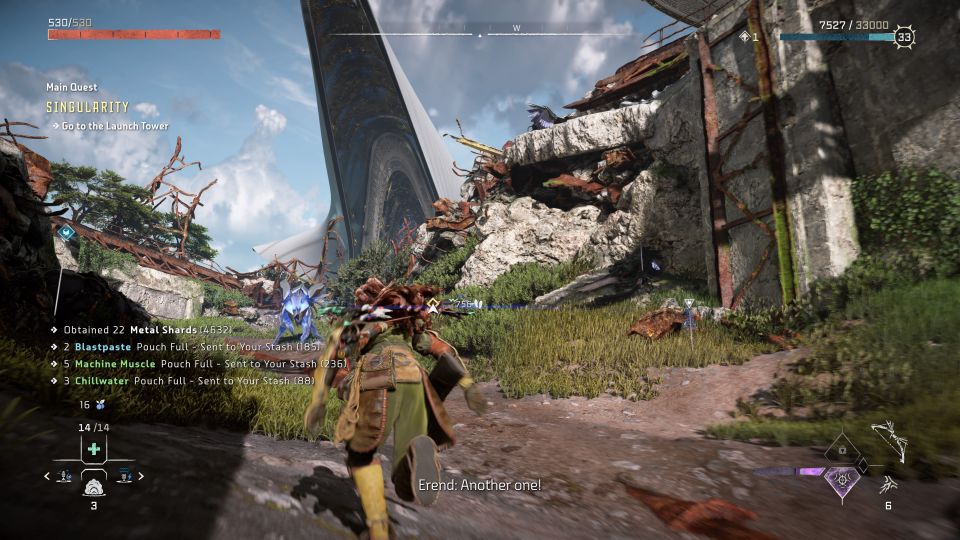 Go to the top of the tower

Now, head to the tower and find a way to the top. 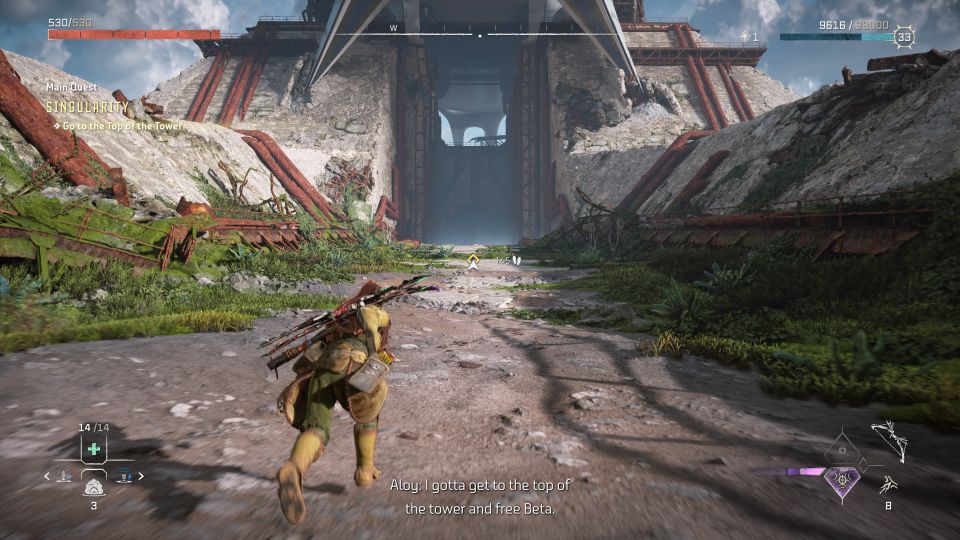 After using the elevator, Erik appears.

You’ll be fighting Erik at the basement.

Watch out for his close range blade attacks. There are two floors here and you can grapple up to maintain your distance.

After Erik is down, Zo will come from behind and kill him. 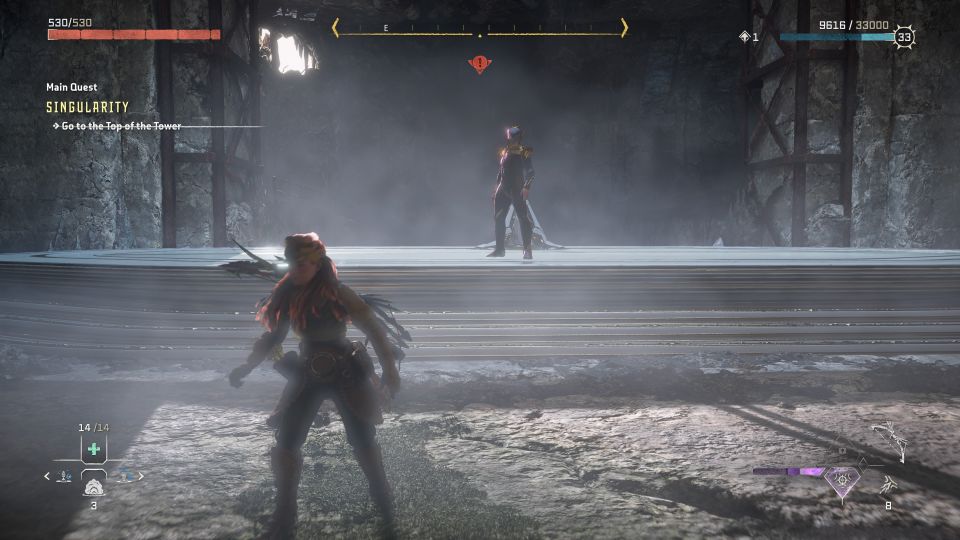 Go to the top

After the battle, make your way to the elevator to go up. 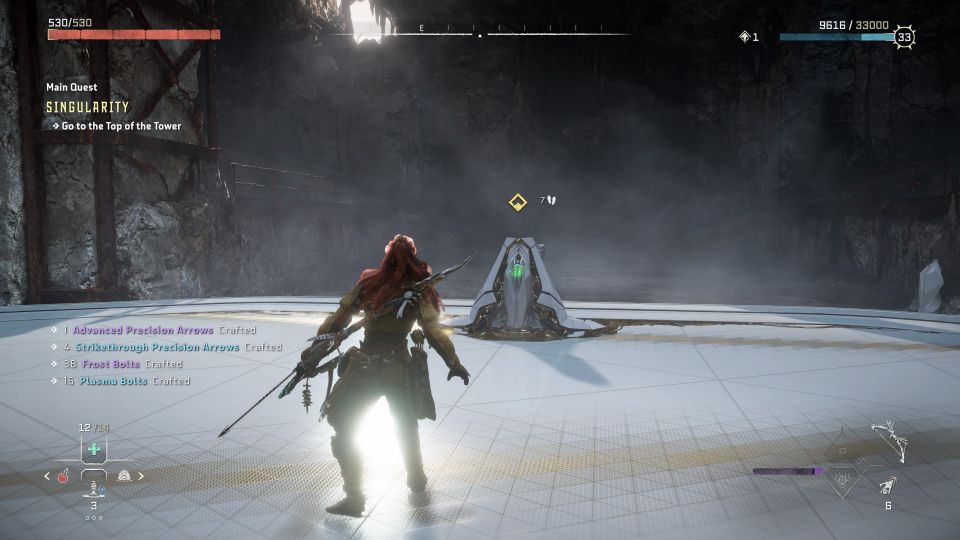 The elevator will stop in the middle. Use focus to find a way to climb up. 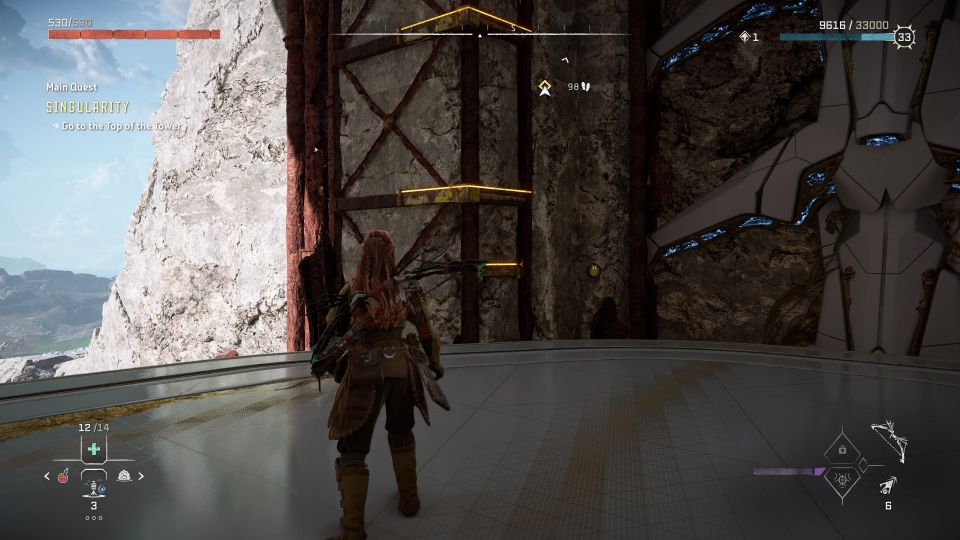 At the top, use a pullcaster to pull down the structure. It will allow you to jump to the other side and climb up. 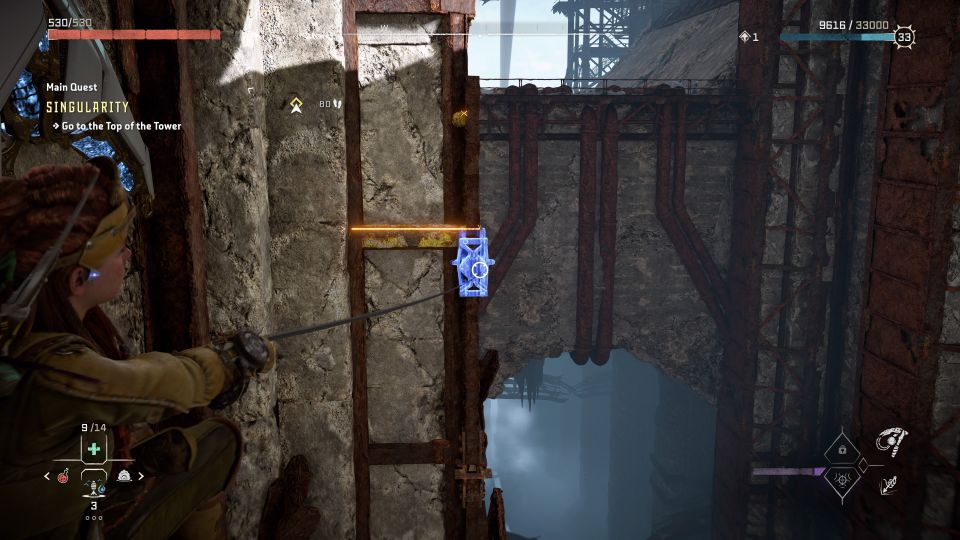 Continue to make your way up via grapple points and stairs. 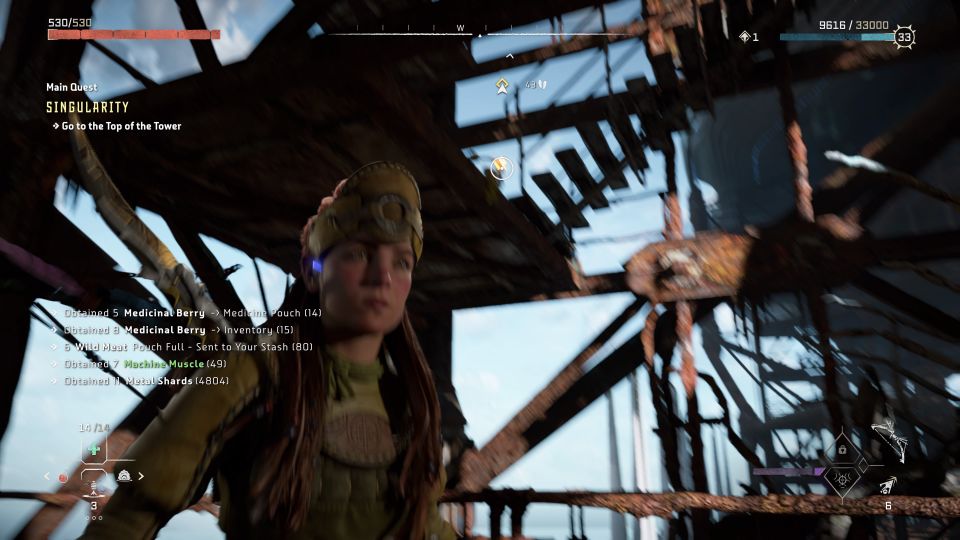 You’ll then reach a door at the top of the tower. 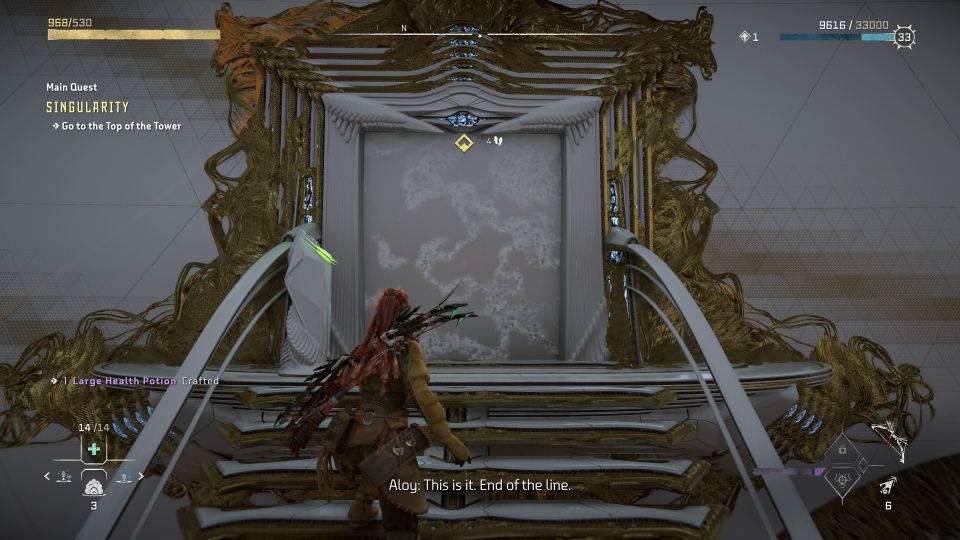 Inside, you’ll find Beta and you’ll learn of a new threat called the Nemesis. They’ve been hunting the ship that the Zeniths ran away with and poses the biggest threat to earth. 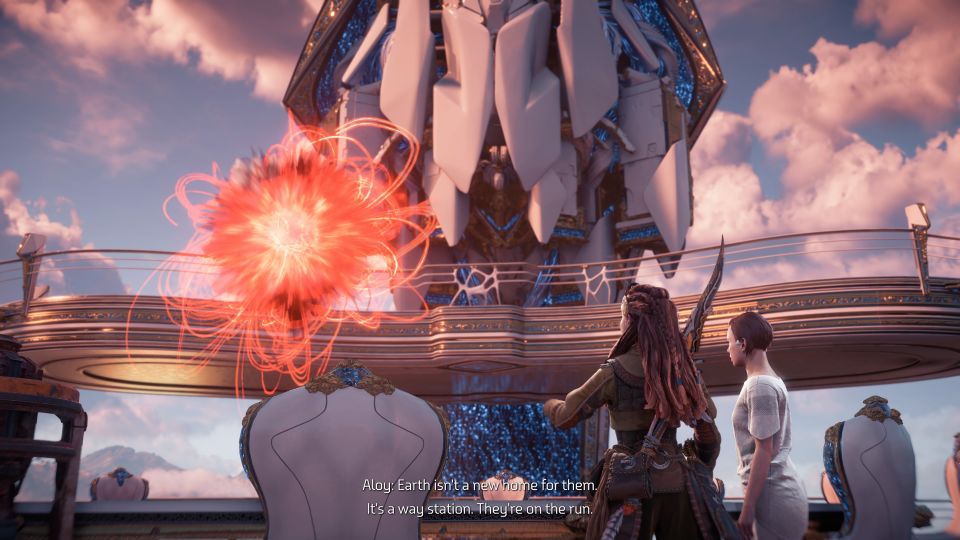 Tilda will then ask Aloy to follow her to space and build a new world. Aloy expectedly refuses.

The final boss fight will be Tilda in her Spectral suit.

Scan her and you’ll see some weak points. Using precision arrows might be the best for those weak points (gold parts of her body) as the damage is pretty good. 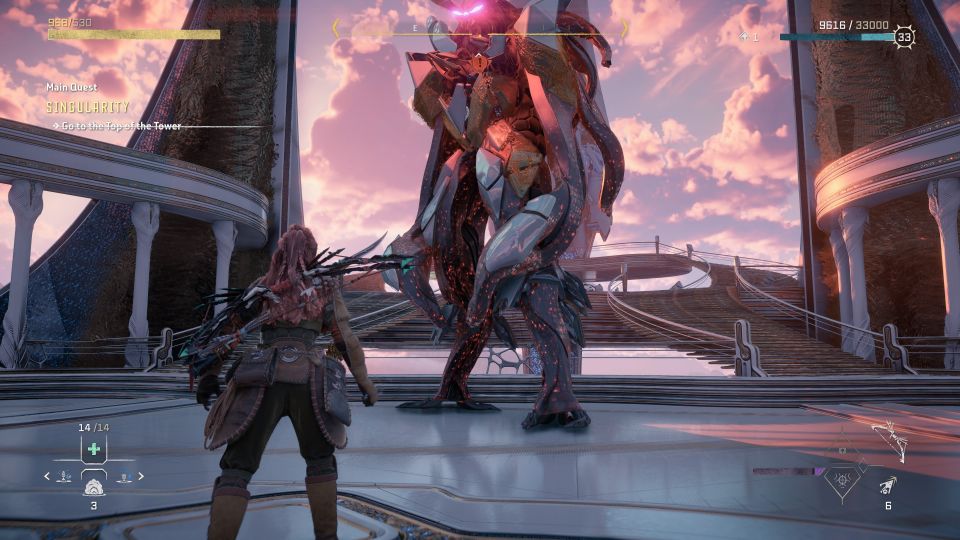 She’ll also have varying attacks during the fight.

After the fight, the Spectral suit explodes with Tilda in it. 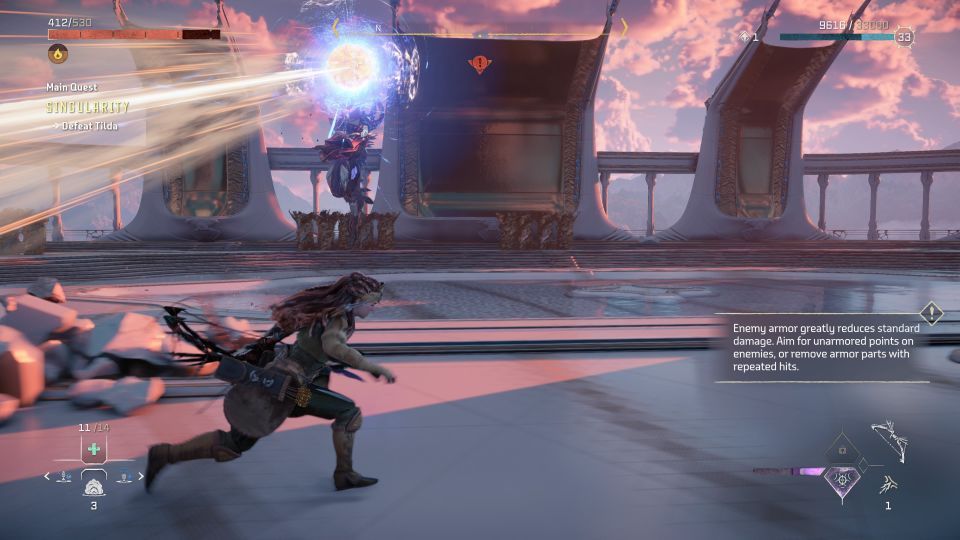 Towards the end, Sylens reveals his main plan to leave earth as he knew about the Nemesis all along.

He invited Aloy but the latter refused. Sylens then finally decided to remain as they work on a way to fight Nemesis. 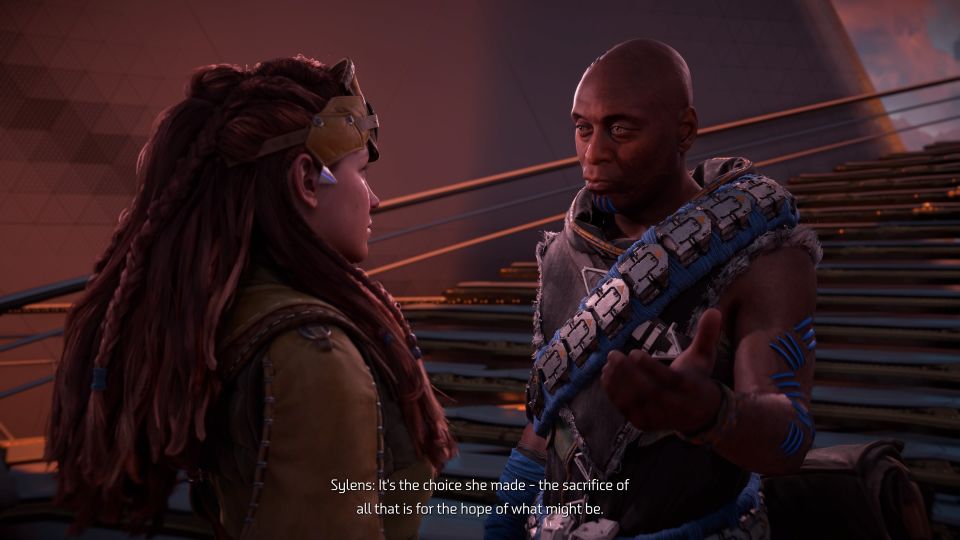 Horizon Forbidden West: The Wings Of The Ten Walkthrough