Life During Wartime is a main mission / job in Act 2 of Cyberpunk 2077.

The objective is to chase after Anders Hellman and interrogate him.

Here’s a walkthrough of Life During Wartime in Cyberpunk 2077. 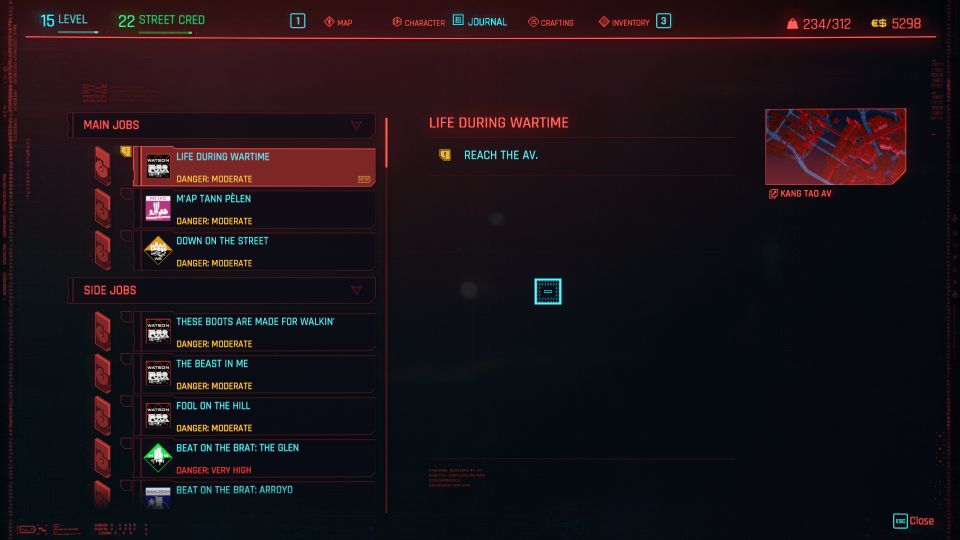 Take out the drones

While Panam is driving, take out the drones. 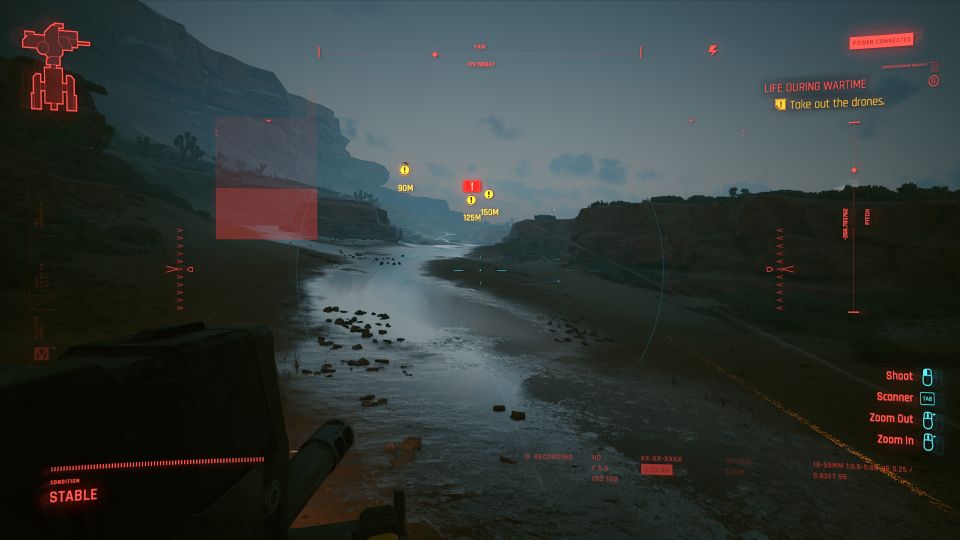 She’ll get shot when she tries to repair the turret.

After the drones are gone, she’ll continue to head towards the AV. 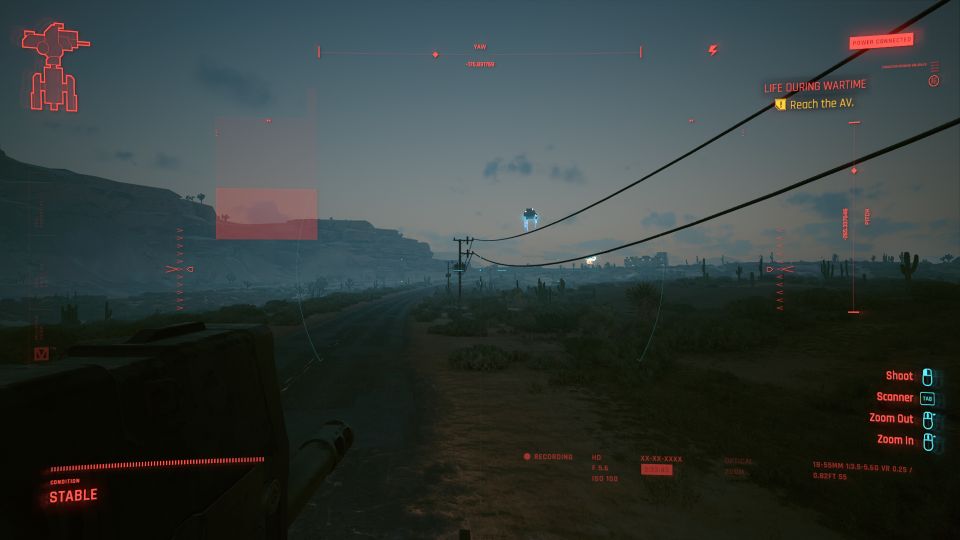 Connect to the drone

After reaching near the AV, jack into the drone. 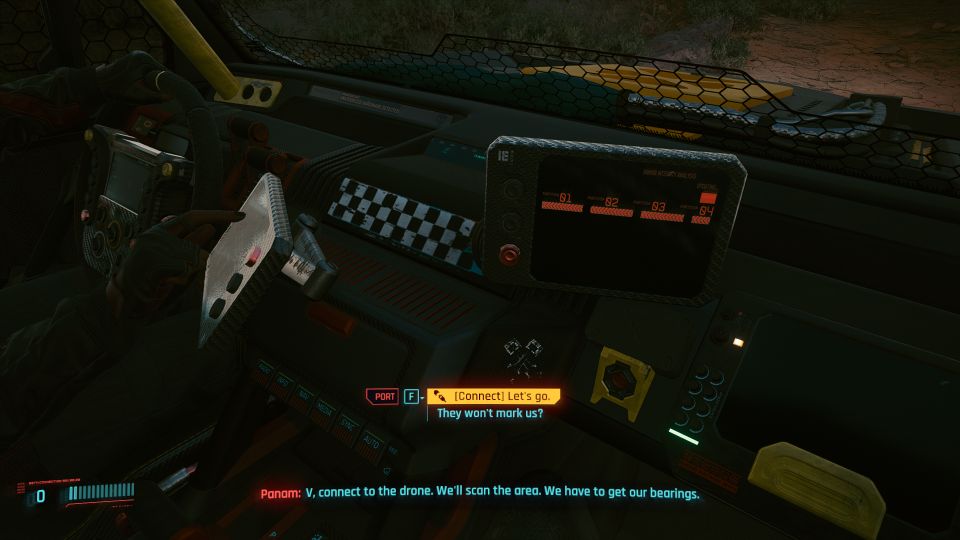 There are a lot of optional objectives here. You can scan for signs of the Aldecaldos, Kang Tao operatives and combat drones.

Most importantly, scan for Mitch and the crashed AV. 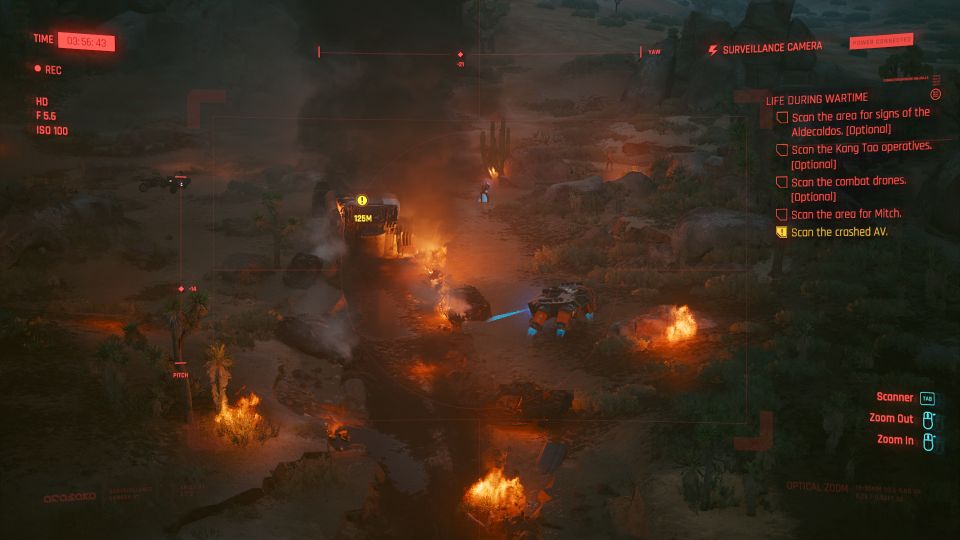 There should be around five Kang Tao operatives that you have to take out.

Sneaking up to them doesn’t seem to work. 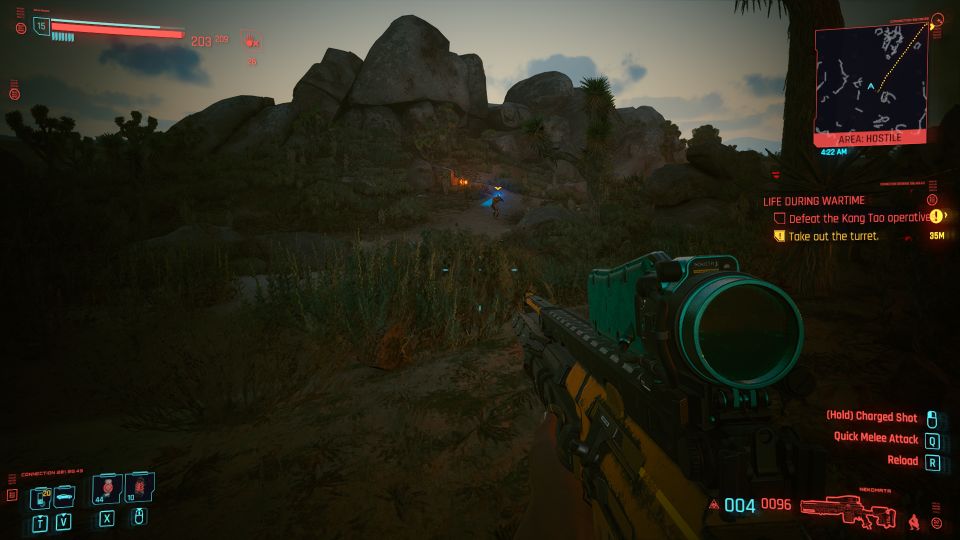 Take out the turret

To take out the turret, go to the AV and look for the laptop at the side of it.

Use it to turn off the turret. 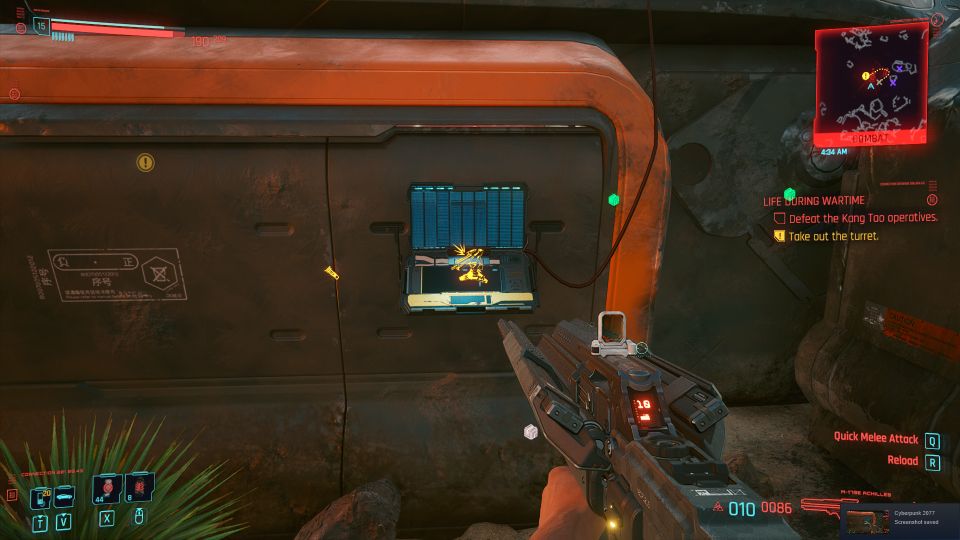 Once the objectives are done, wait for Panam to arrive. 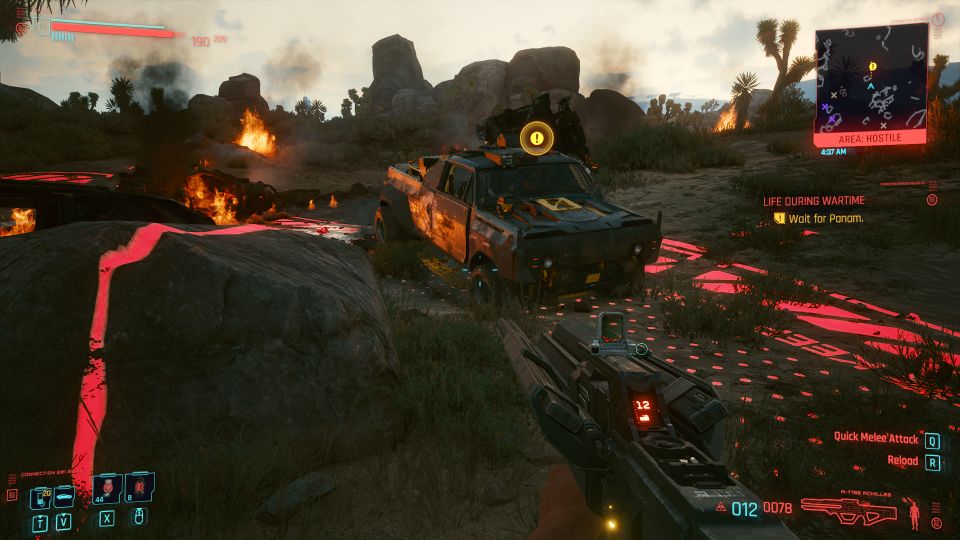 Get in the AV

Head to the AV’s door and open it.

Talk to the pilot

You will see the pilot taking Mitch at gunpoint.

You can try to talk sense to the pilot but it will fail. Mitch will push him down and Panam shoots the pilot. 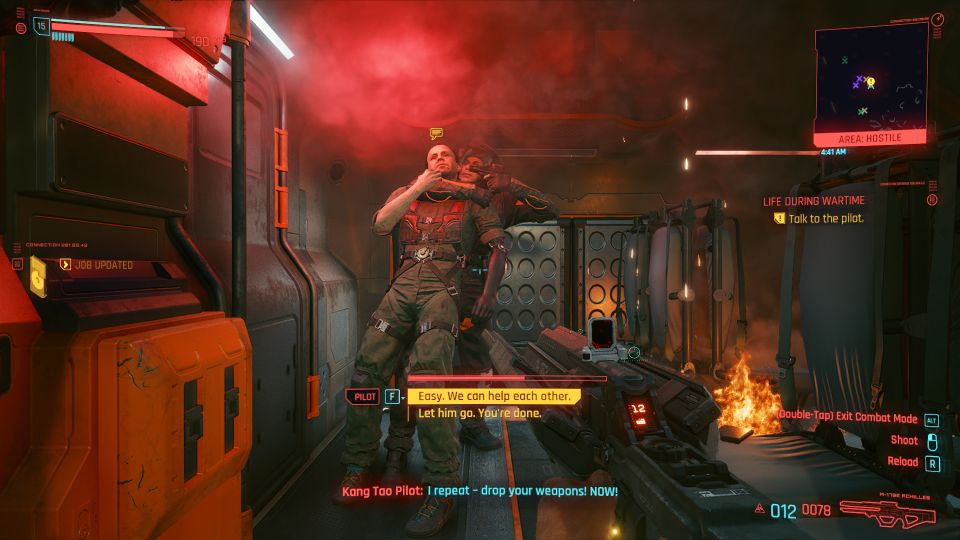 Next, talk to Mitch.

Here, you can ask Panam to stay but she’ll insist in joining you. 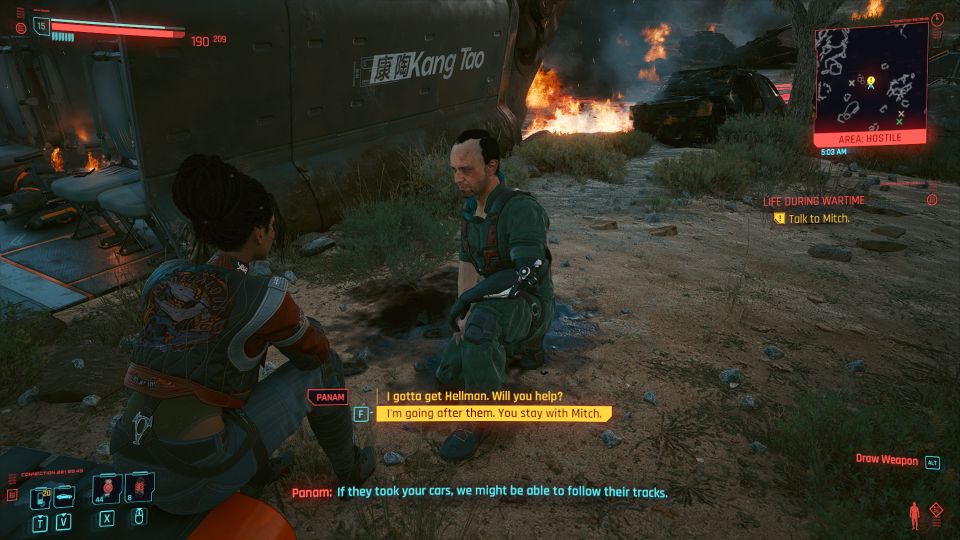 To get the trail, scan the tracks first. 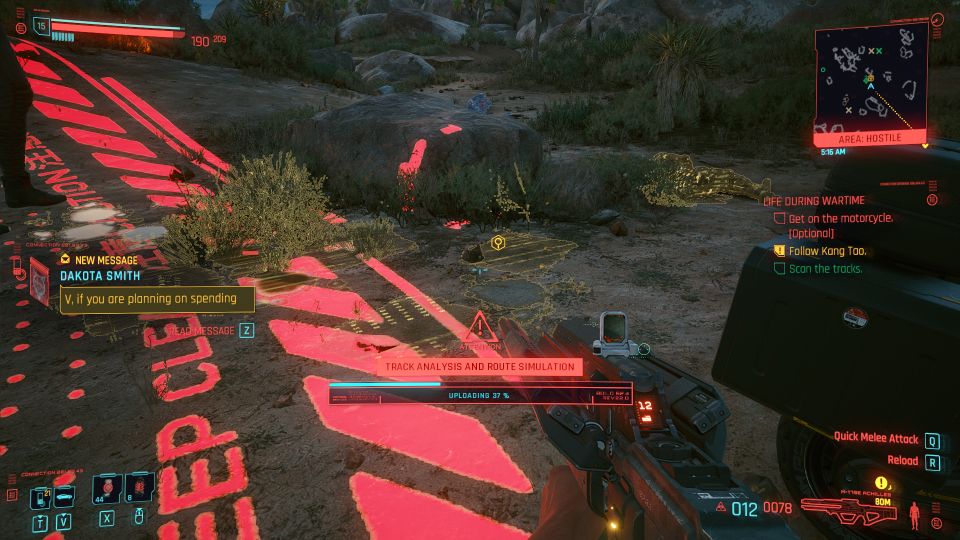 Then, grab a motorcycle or summon your car. Follow the visual trail of Kang Tao. 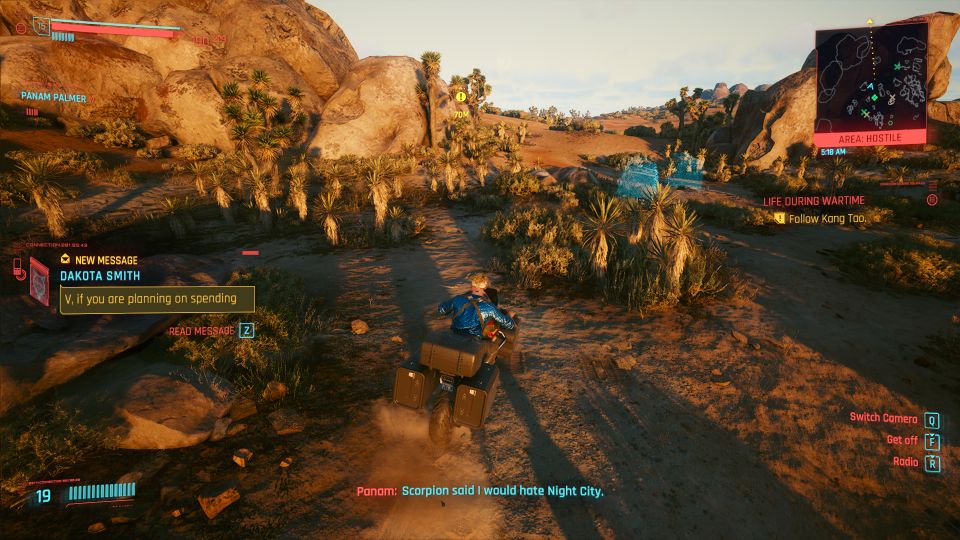 You will then reach the airstrip with a couple of snipers. You can take them down, or just avoid them and continue following the tracks. 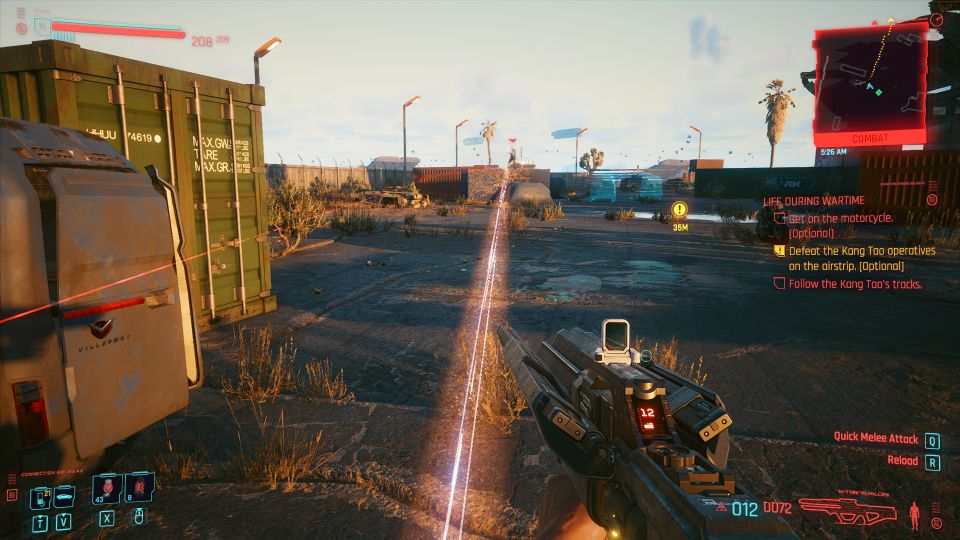 Continue following the tracks left behind. 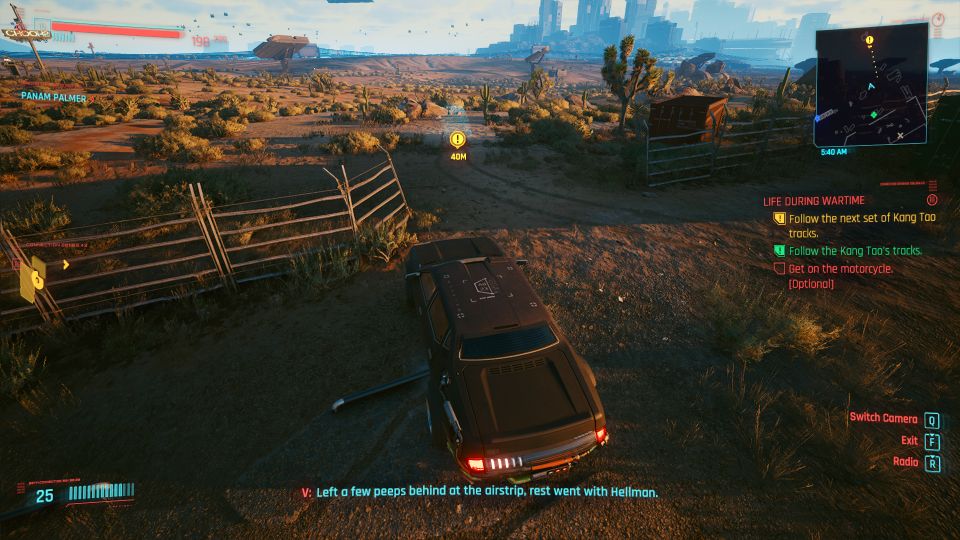 Get into the gas station

You will eventually reach a gas station filled with soldiers. 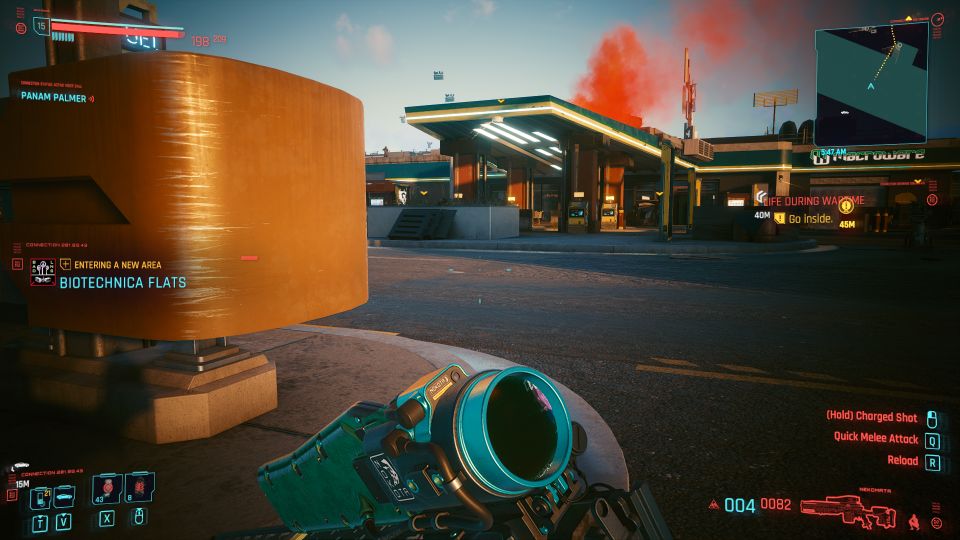 The aim is to enter the gas station. It’s better if you can do it quietly as the place is swarmed.

Otherwise, you have a lot of people and drones to shoot. 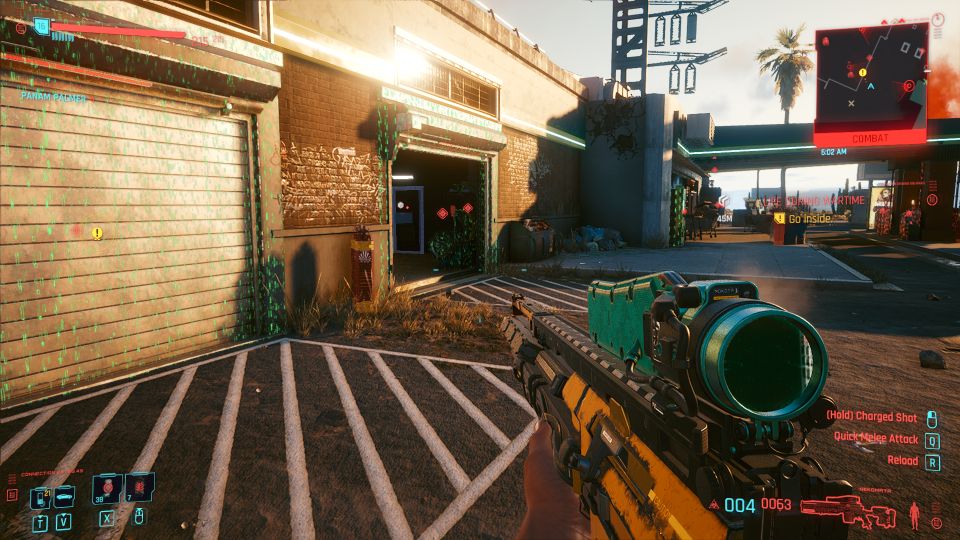 Hellman is located in the garage. He is on the upper floor of the garage. 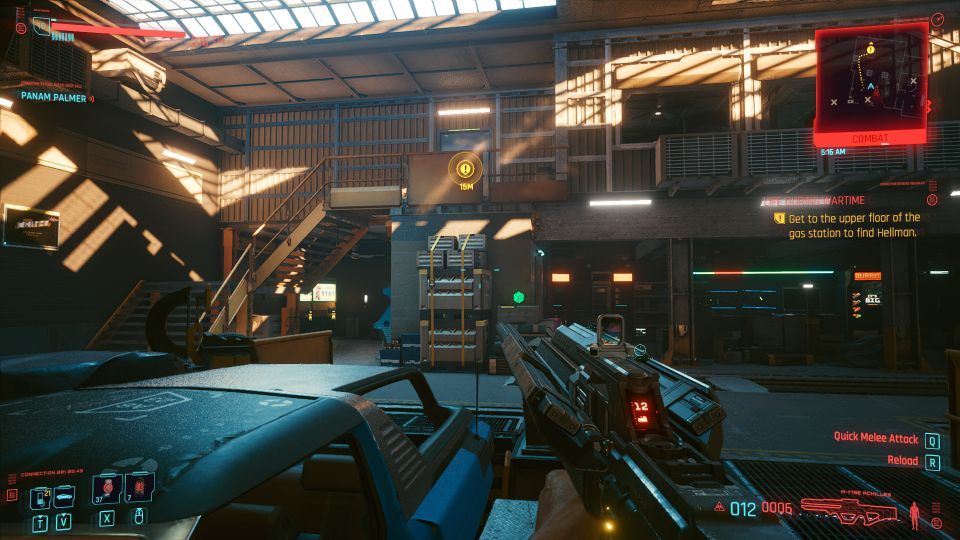 Open the doors and you’ll find him inside with his medic. 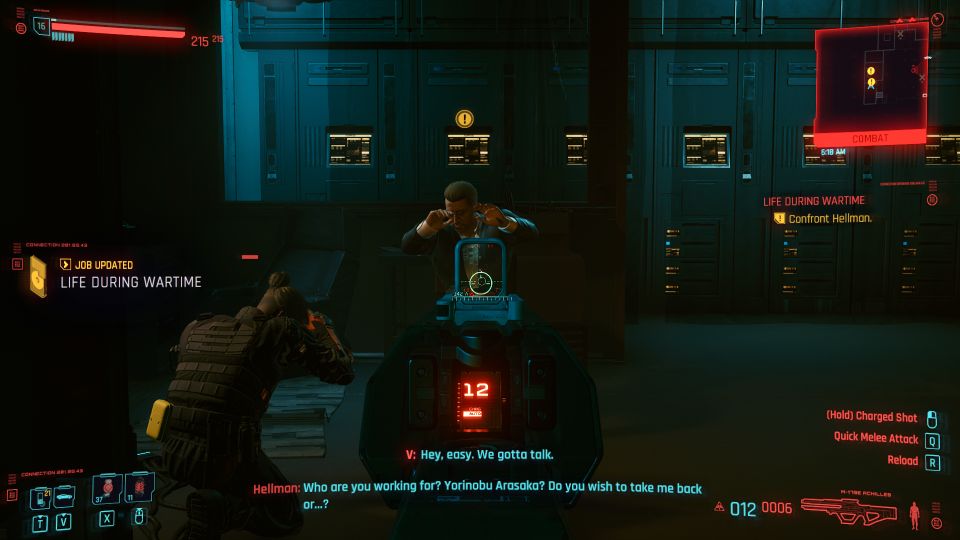 Go near him to knock him out. You have to choose the “knock out” option instead of trying to melee him. 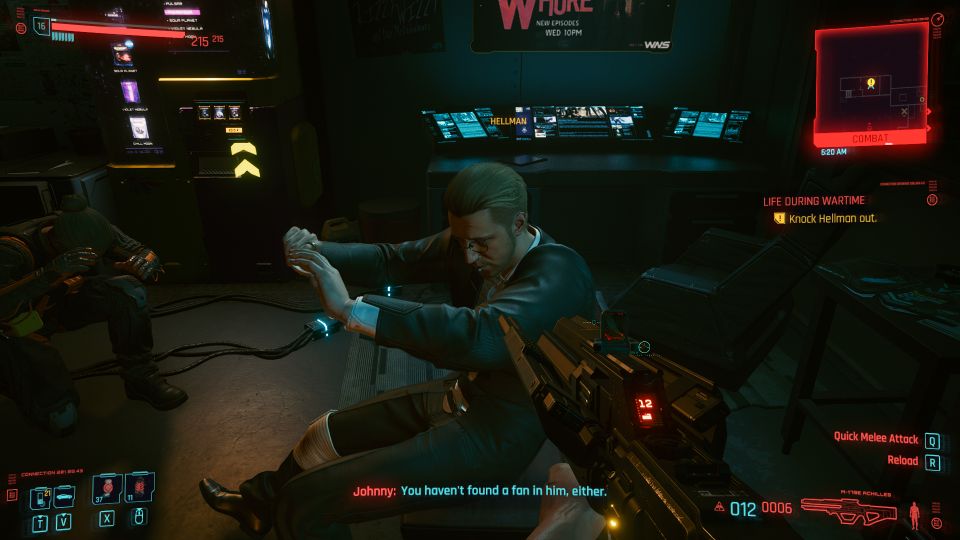 Call Takemura after Hellman is unconscious. 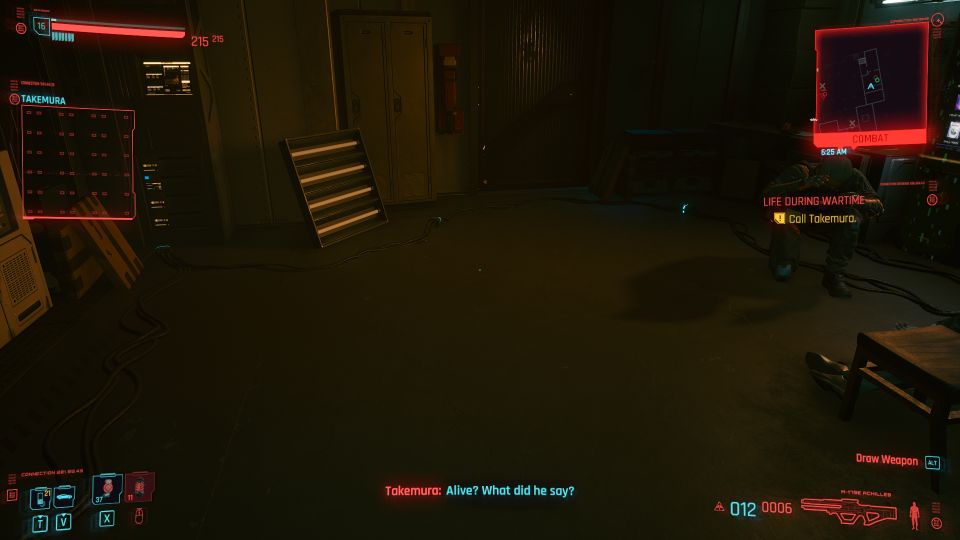 Carry him out and you’ll see that the Aldecaldos gang is already outside, with Panam. 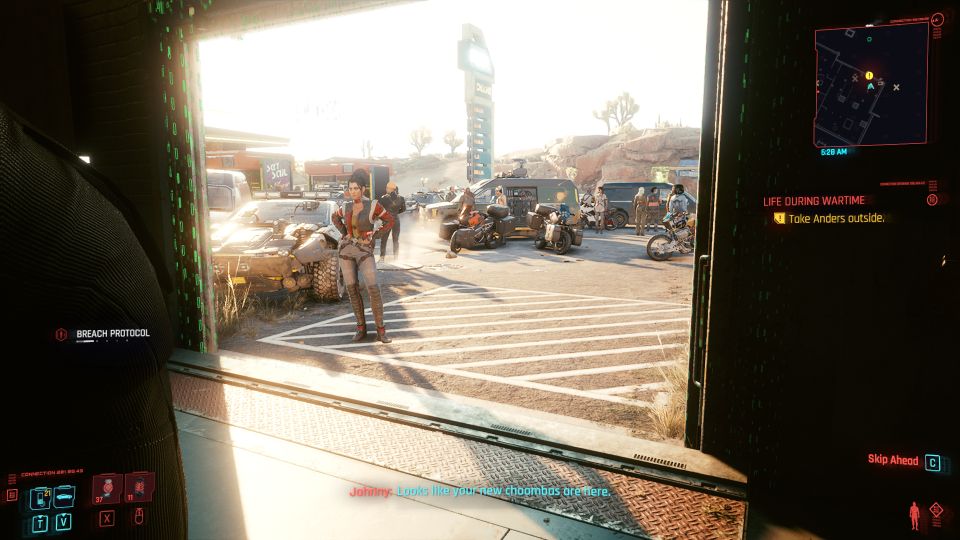 You can try to tell Saul that it’s not Panam’s fault that Scorpion died, but he will brush it off. 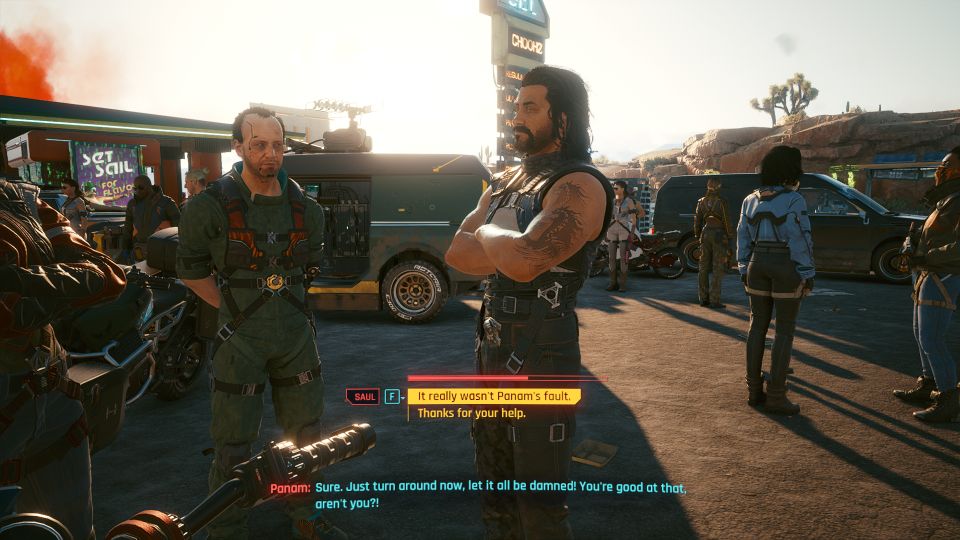 After the cutscene, you’ll appear at the Sunset Motel.

Talk to Hellman first but he’ll tell you that he doesn’t have the cure.

Then, Takemura will come in. The mission ends here. 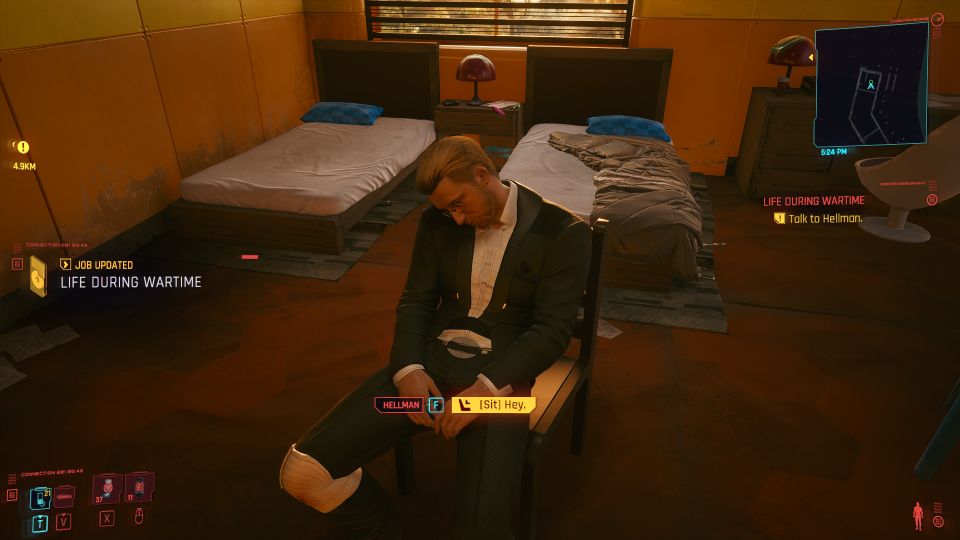