Storming the Walls is a main quest under Suthsexe in Assassin’s Creed Valhalla.

Your task is to storm Portcestre, find Sigurd and kill Fulke.

Here’s a walkthrough of Storming the Walls in AC Valhalla. 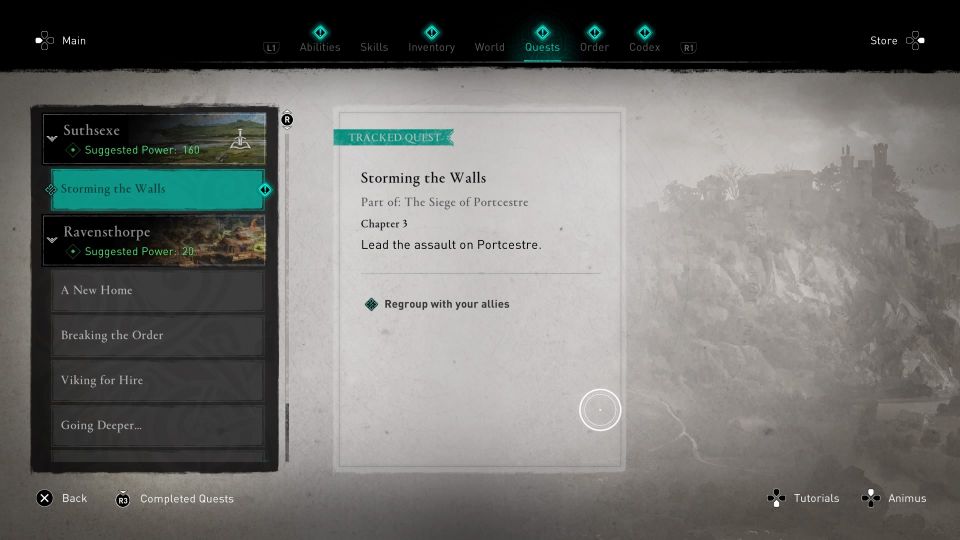 To begin the quest, meet your allies. The exact location is shown below, marked by the quest symbol. 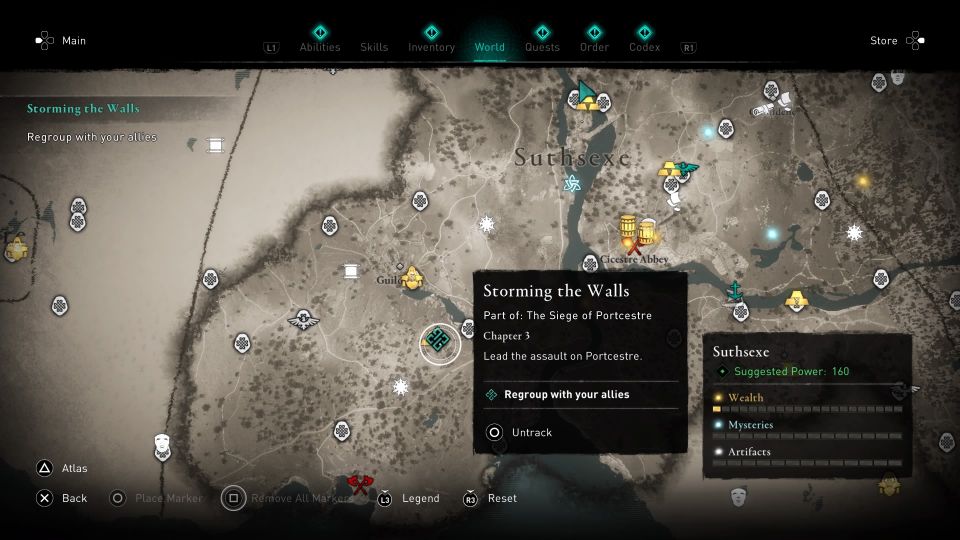 You will see plenty of allies from the other regions. You can talk to them first.

Once you’re ready, talk to Basim. 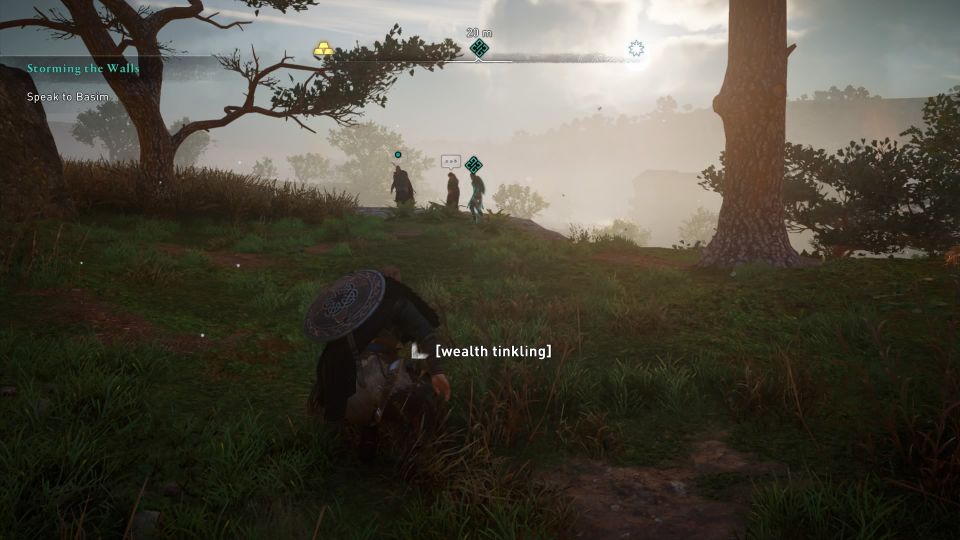 Eivor will start giving his speech like in most war movies, but it doesn’t sound as epic without a big army watching. 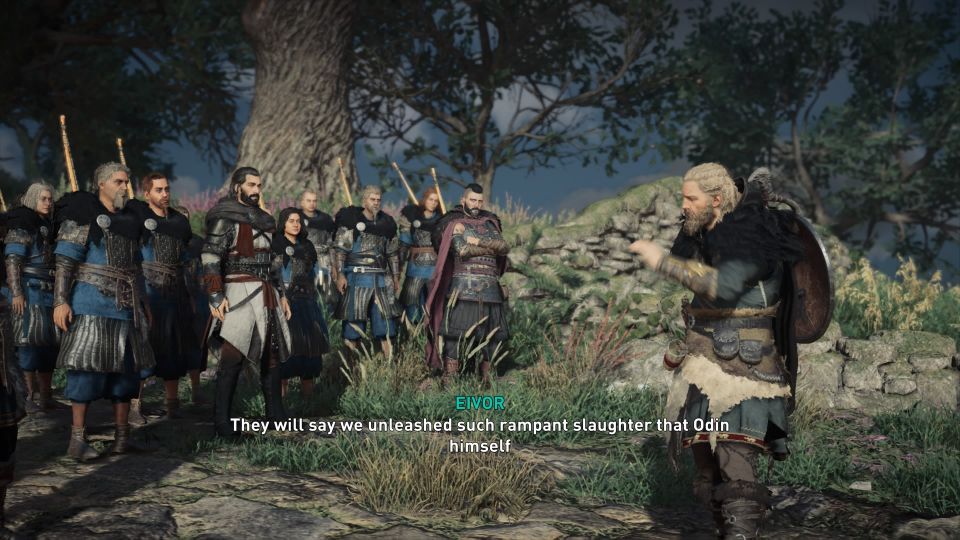 After starting the assault, you have to breach the gate. Before reaching the gate, there are wooden barriers.

Use the oil jars to destroy those barriers. 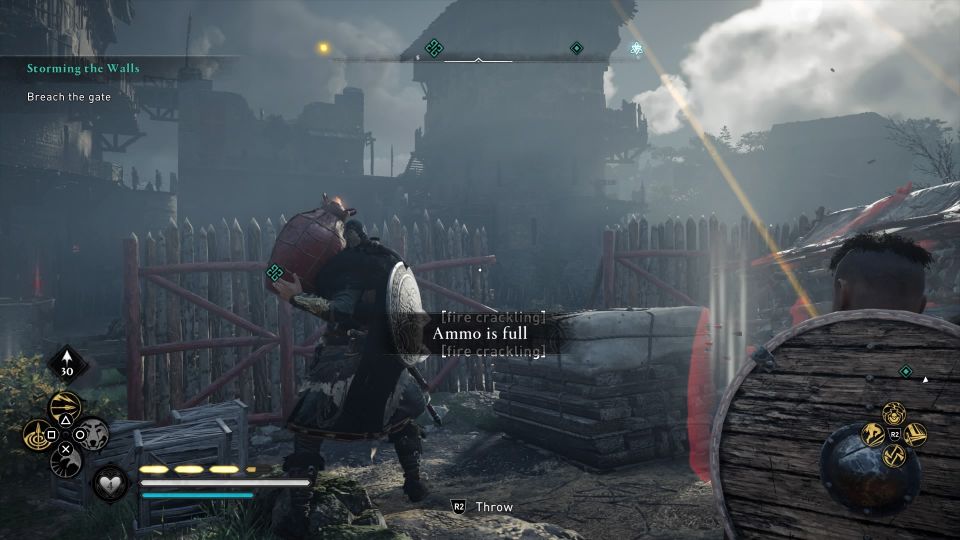 Once you’re at the gate, you will encounter more archers. You may want to shoot at the springalds and archers above. 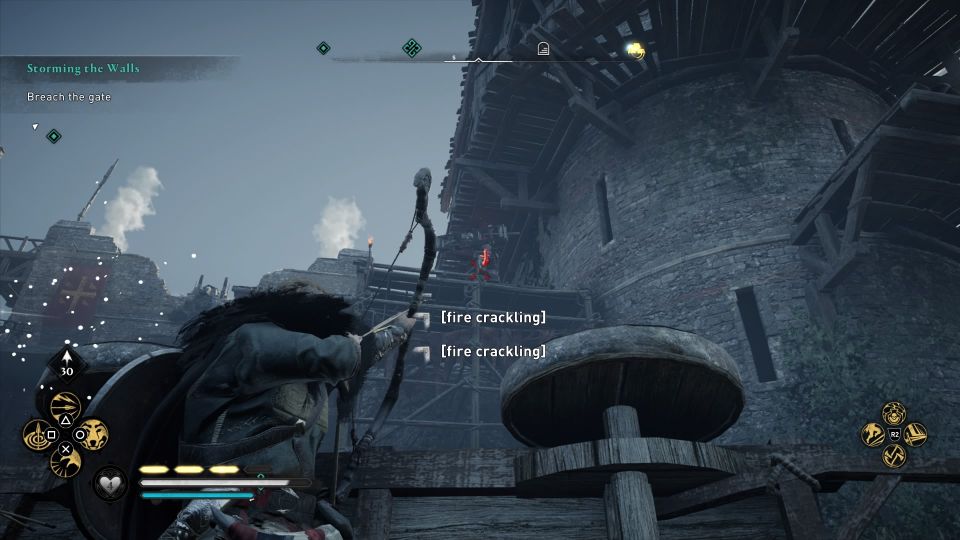 If the archers keep attacking them with flaming arrows, they’ll stay away from the wagon.

Once most of the archers are gone, you’ll be able to charge the wagon to breach the gate without much distraction. You need at least another ally to use the wagon. 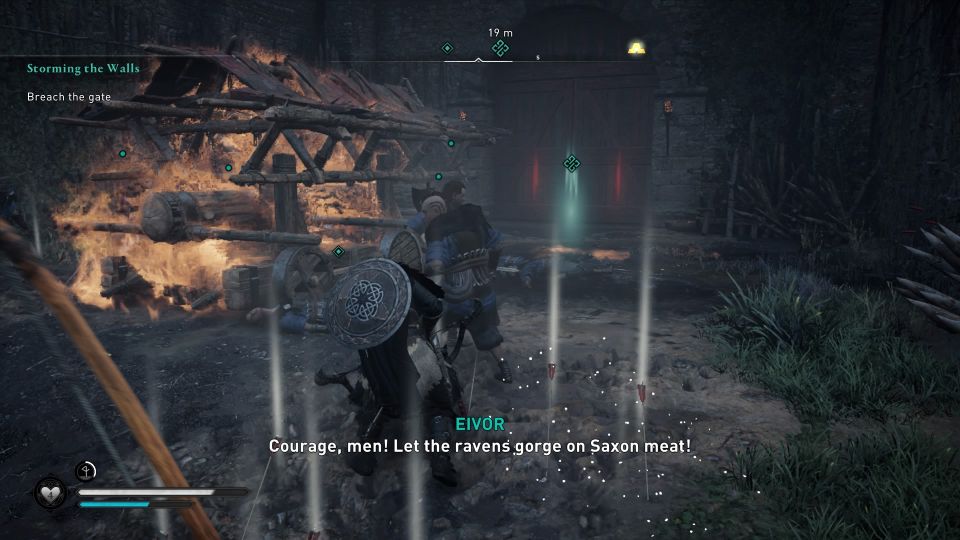 Destroy one of the palisades

In the next area, you have to destroy one of the palisades (wooden barriers).

There’s one on the left and another on the right.

If you go to the right-side palisade, you will see an oil jar at the gate. Shoot at it and the palisade will go down.

In the next area, you have to lift the portculis. It’s the big steel gate.

To lift it, you need to climb on the wall and go to the portculis’ mechanism.

Kill the guard first and then turn the wheel to lift the portculis.

Once you’re at the next area, destroy the palisade.

You will be able to find an oil jar near the boats. Take it and throw it at the palisade.

Get inside the keep

Finally, you’ll reach the keep’s compound. Head towards the keep.

As the main door is locked, you need to find an alternative way in.

If you look at the left side of the wall, there’s a platform for you to climb up.

There’s no door to block you here.

Enter the keep and head all the way up.

At the top floor, examine the clues to look for Sigurd.

Get inside the church

You will notice Fulke going to the church.

Head towards the church. Along the way, the guards will block the bridge.

Get past the guards and head to the church. The door requires two people to force open.

Wait for Basim to arrive.

After entering the church, a cutscene will load. Eivor will finally meet Sigurd again.

Fulke runs away again and you have to chase her. Basim will guard Sigurd instead.

Follow the path down to find Fulke. She’ll rely on the darkness a lot.

She’ll charge from the dark area towards you. One way to see her location is to spam Odin’s sight.

After some time, she’ll extinguish the torch and head to the next area with a similar torch in the middle.

Fulke uses a small sword or a dagger for this fight.

Continue the fight until she reaches 1/3 of her health and a cutscene will trigger.

She’ll run away yet again.

As Fulke gets out of the underground path, she’ll be surrounded by Eivor’s men.

You’ll have to resume the fight here. This time, she’ll use a big cross instead of her dagger.

She’ll be much slower and it’s easier to kill her.

Hold off the Saxons

As Basim and the rest brings Sigurd back to Ravensthorpe, you’ll have to hold off the Saxons.

Just kill the soldiers and the quest is complete.

AC Valhalla: How To Get Book Of Knowledge In Briggworth