Shadowlord’s Castle is the last area of NieR Replicant version 1.22 before the story ends.

Your main objective is to enter the castle and defeat the Shadowlord himself.

Here’s a walkthrough of Shadowlord’s Castle in NieR Replicant.

This only covers the first ending, i.e. Ending A.

To enter the Shadowlord’s Castle, you have to go back to the room at the rooftop of the Lost Shrine.

In the first area, you will encounter two birds. You have to answer their questions correctly.

The answers are as follows: 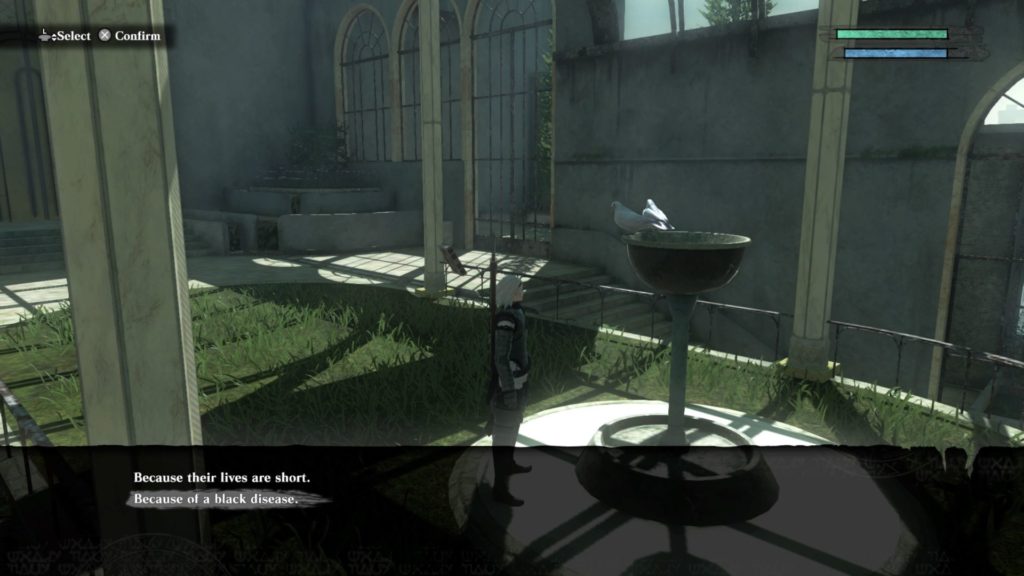 Battle with Popola and Devola

In the next room, you have to fight Popola and Devola for a short period. 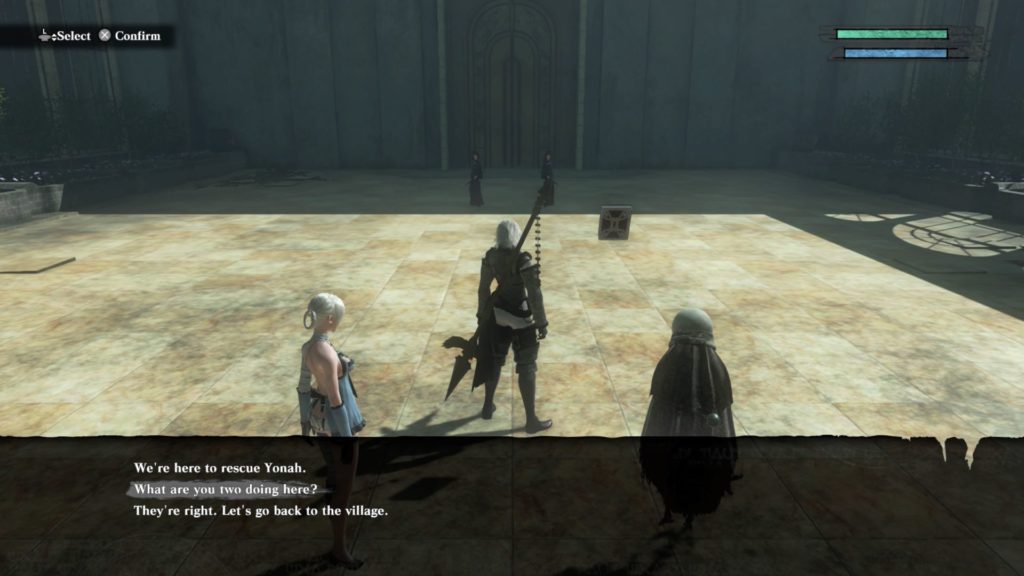 After some time, they’ll copy the magic skills you received from Grimore Weiss and will use them against you.

Before the fight ends, they’ll leave. 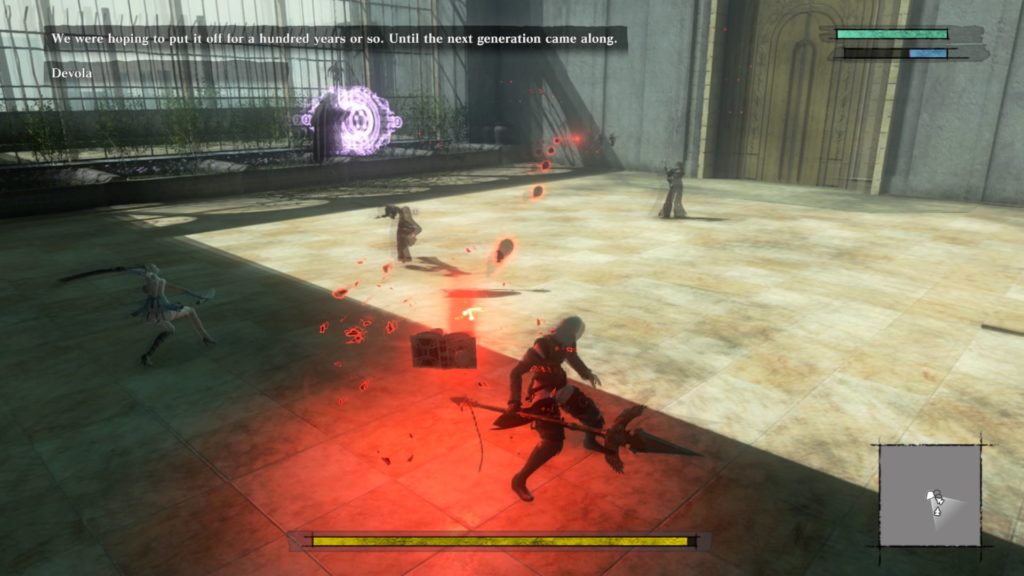 Head to the next area and you’ll get a map for the Shadowlord’s Castle. 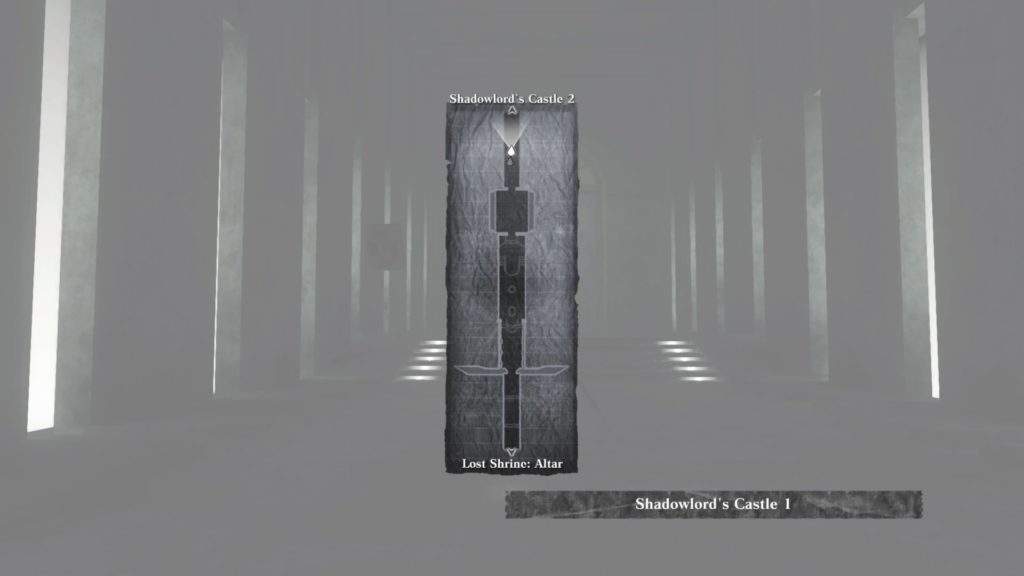 You will reach a ballroom area with some Shades dancing. 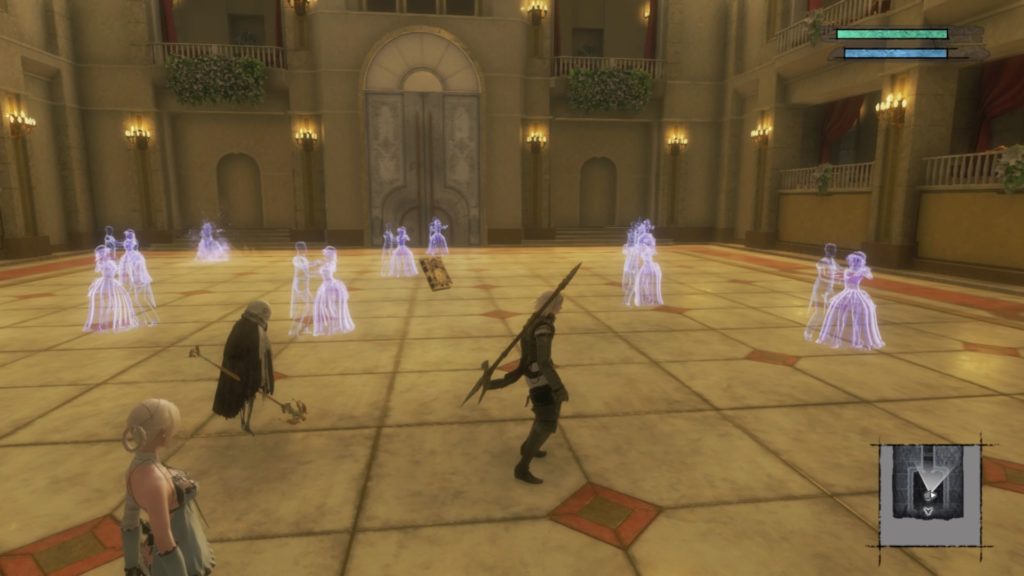 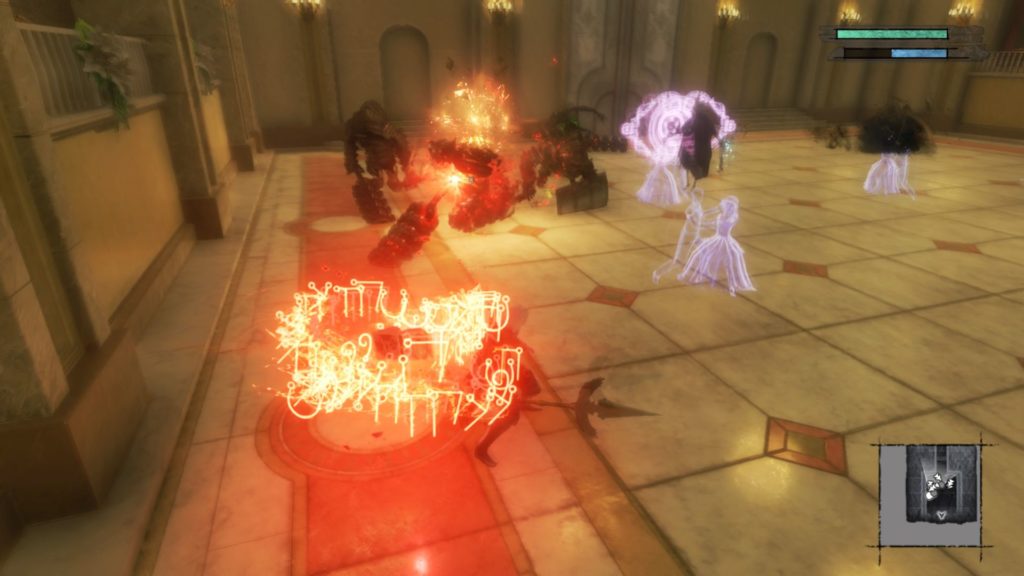 While Kaine is trying to open the door, you have to survive the attack from the flying Shades. 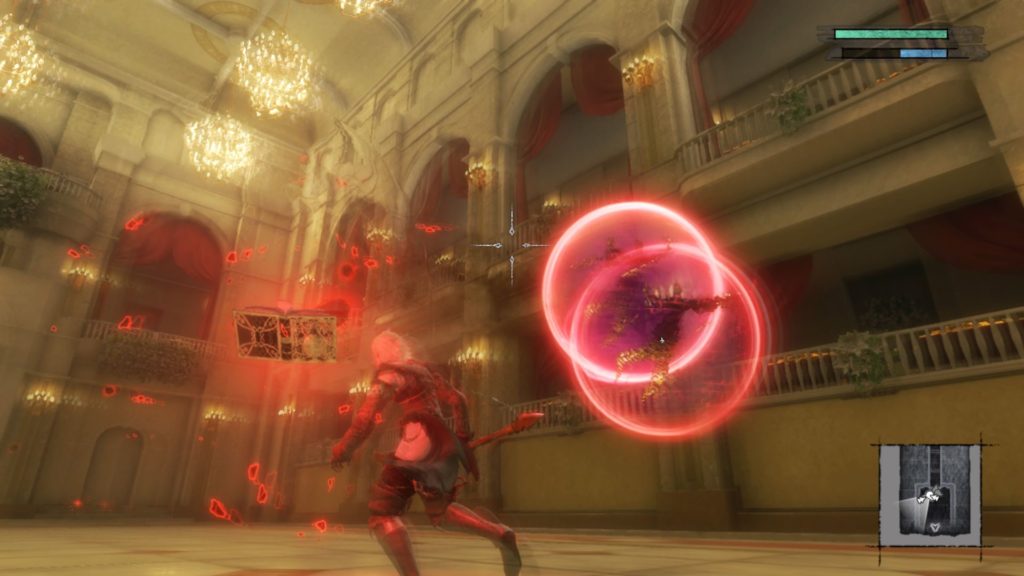 Once the door is opened, some Shade balls will enter. 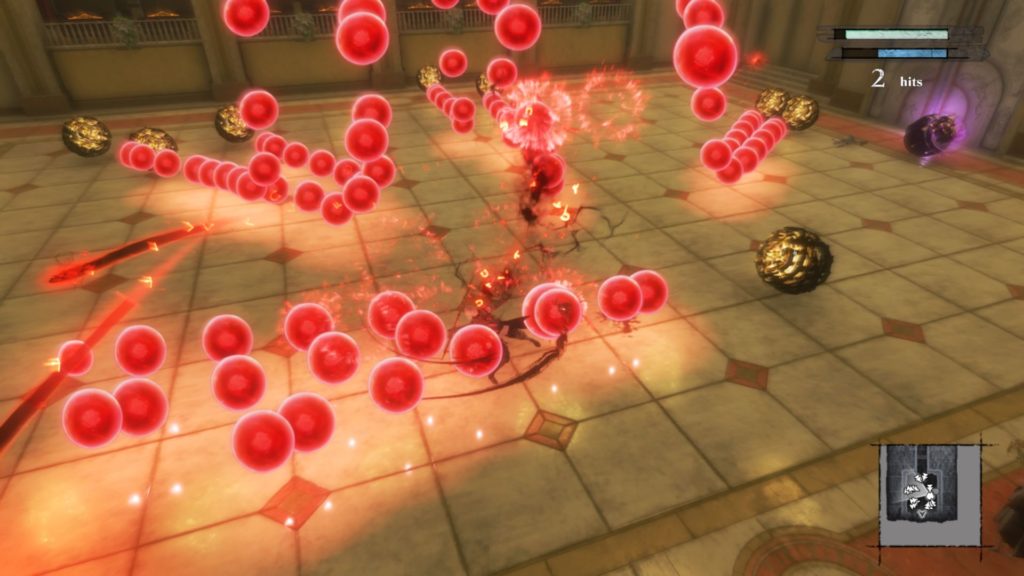 Help Kaine first by interacting with her.

Then, continue to defeat the balls. 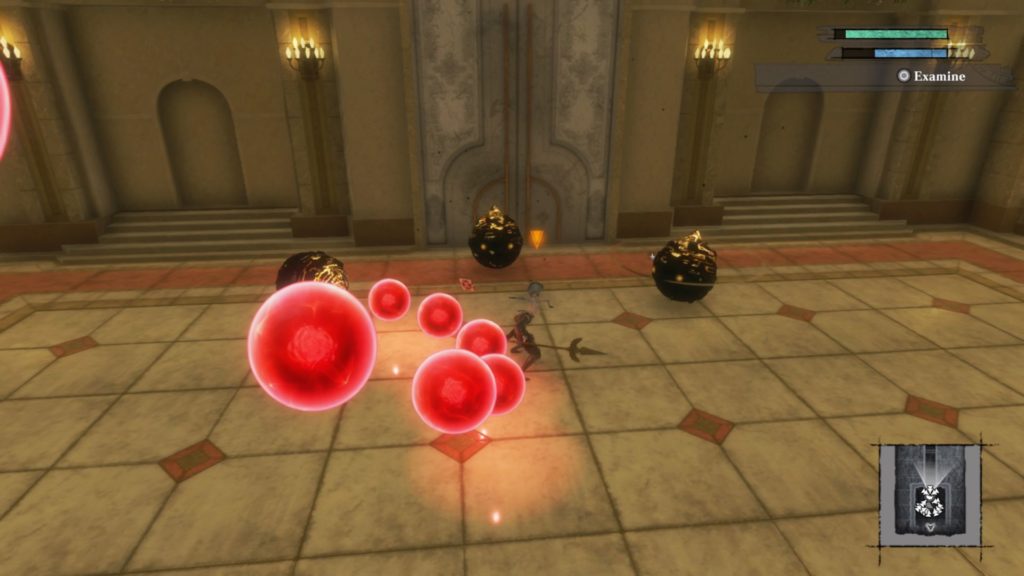 A bull Shade will then appear. Take it out. 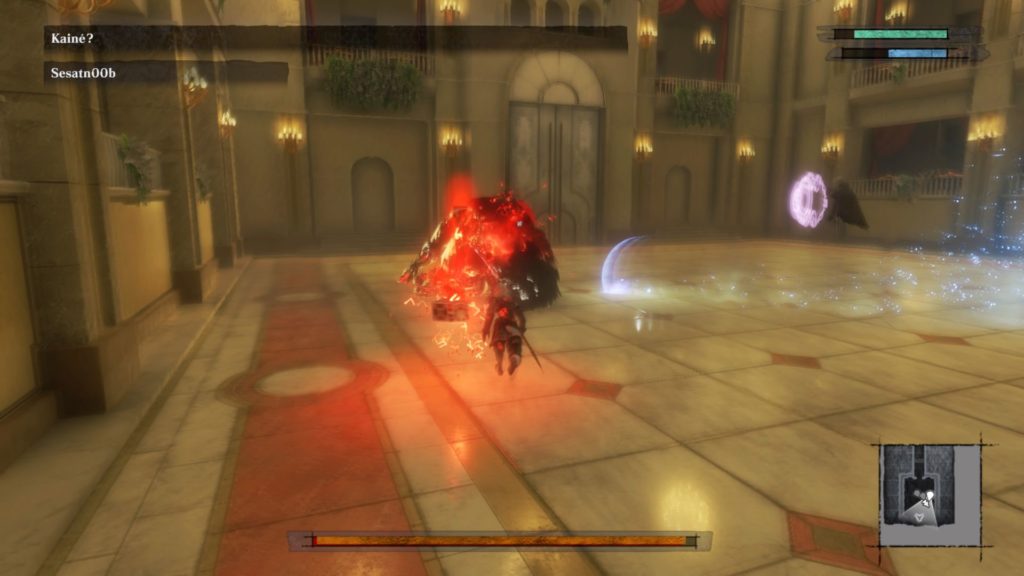 After the first bull, another one will appear. This one can’t die but you have to bring it down first. 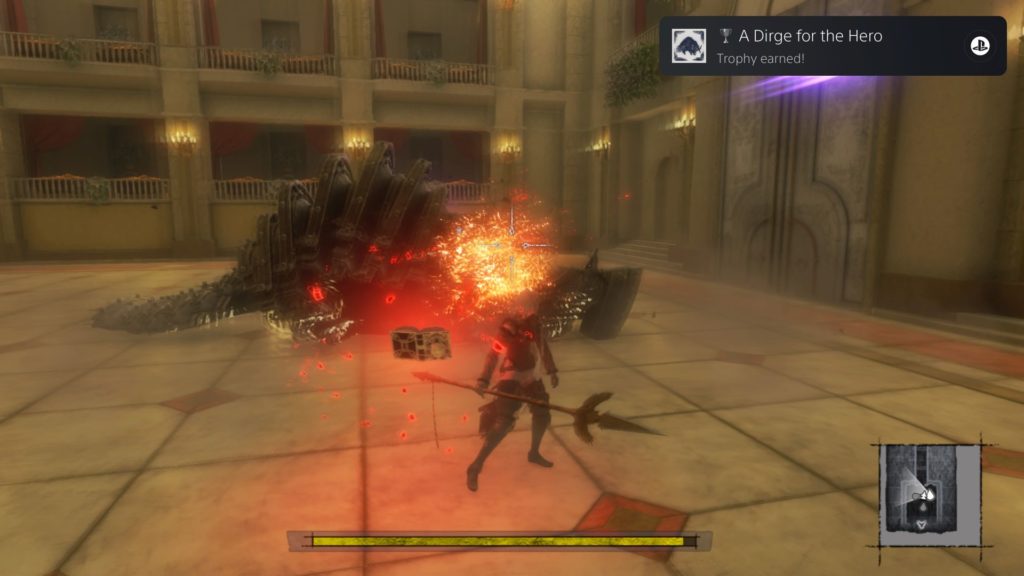 Get the Dragoon Lance

After escaping from the bull for a short moment, destroy the crate and you’ll get a Dragoon Lance. 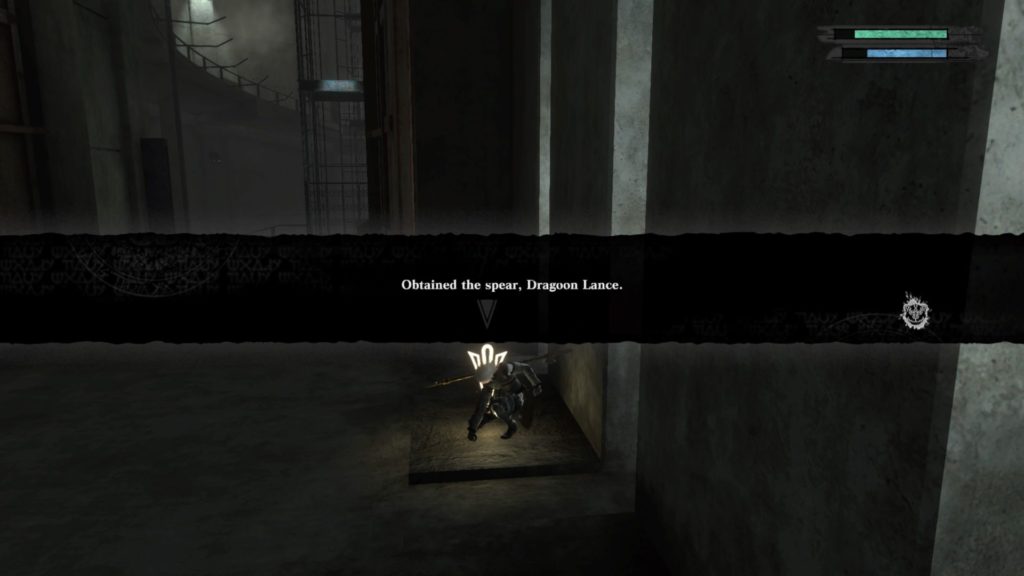 How to outrun the bull Shade

Now, get ready to run all the way up the winding stairs. You will die if the bull catches up to you.

The key to outrunning is to dodge roll the whole time.

Also, if there are crates blocking your way, do the dodge roll + light attack combo. If you dodge and then immediately press the light attack button, your character will charge attack and it sort of keeps the momentum. 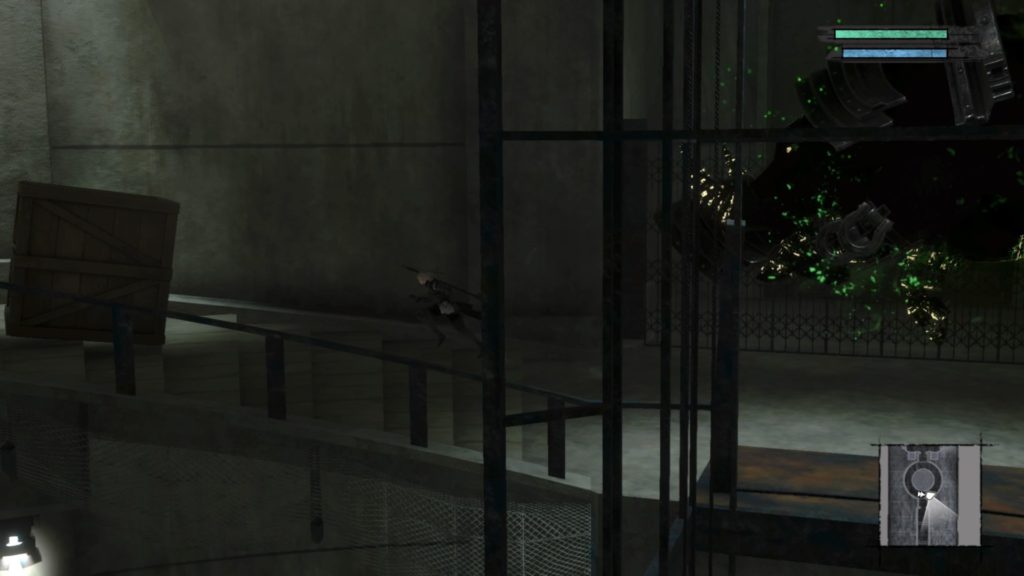 After surviving the bull, you’ll be trapped yet again with the bull.

Bring it down first. 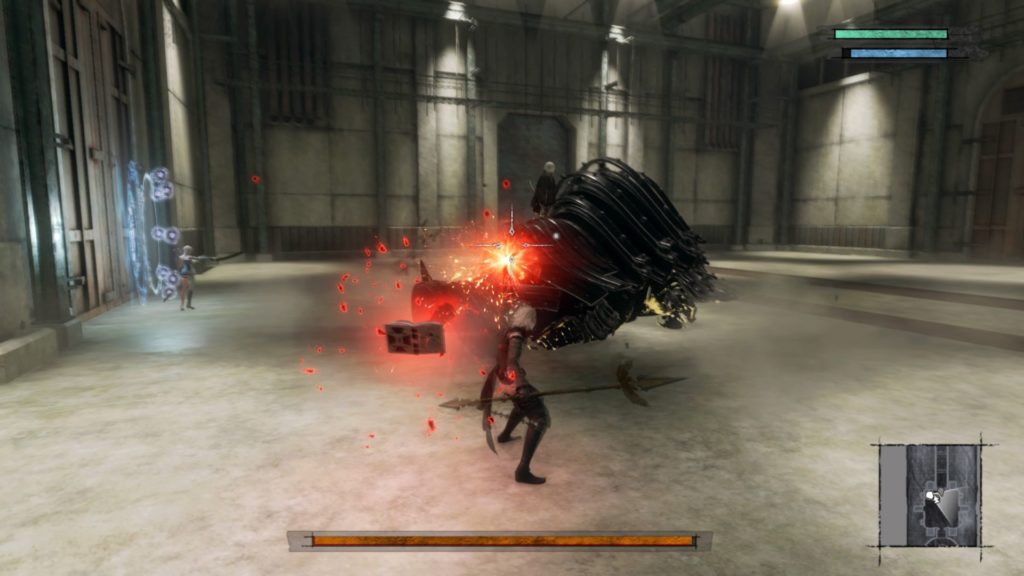 Then, the king from Facade and his men will help to stop the bull while you proceed to the next area. 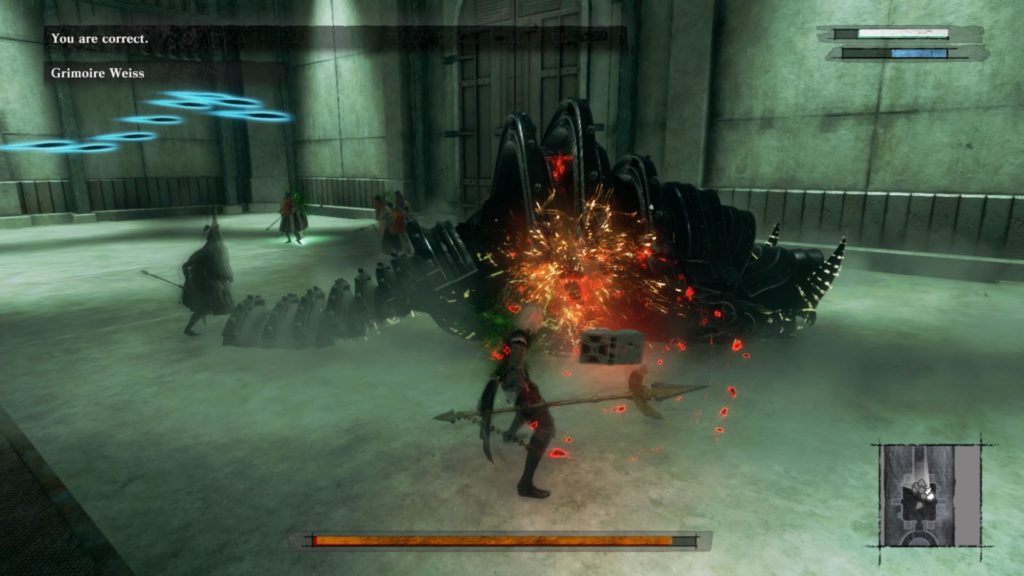 In the next room, you’ll meet Popola and Devola again. They’ll start to explain about Project Gestalt.

You’ll have to defeat them this time. They can use the same magic attacks as you. 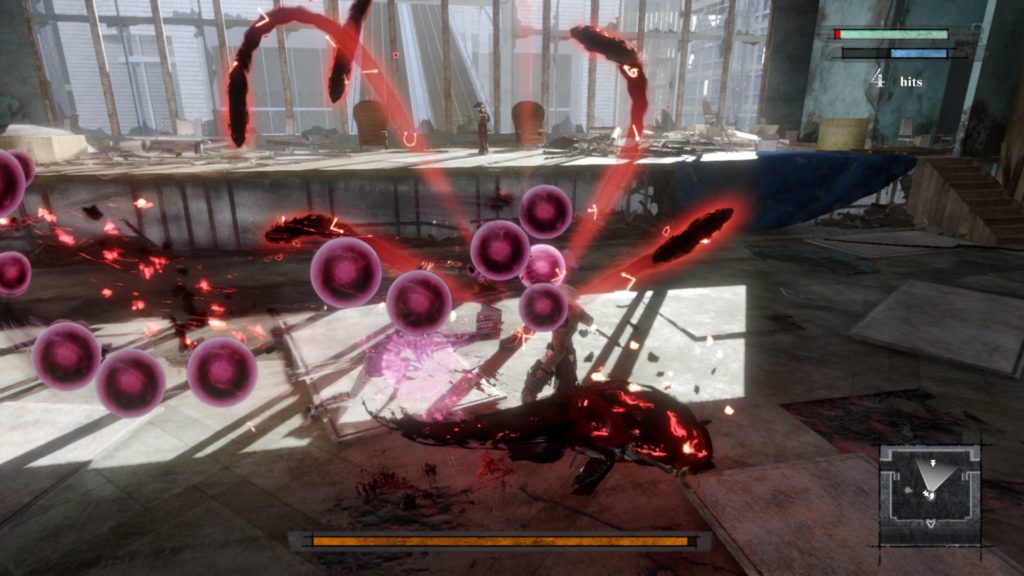 After killing Devola, Popola will go on rage mode.

You’ll have to defeat her as well. Before the fight ends, Emil will rescue the group in his energy bubble.

However, as they attempt to escape, Popola catches them. Emil then stays behind to allow Nier and Kaine to leave. 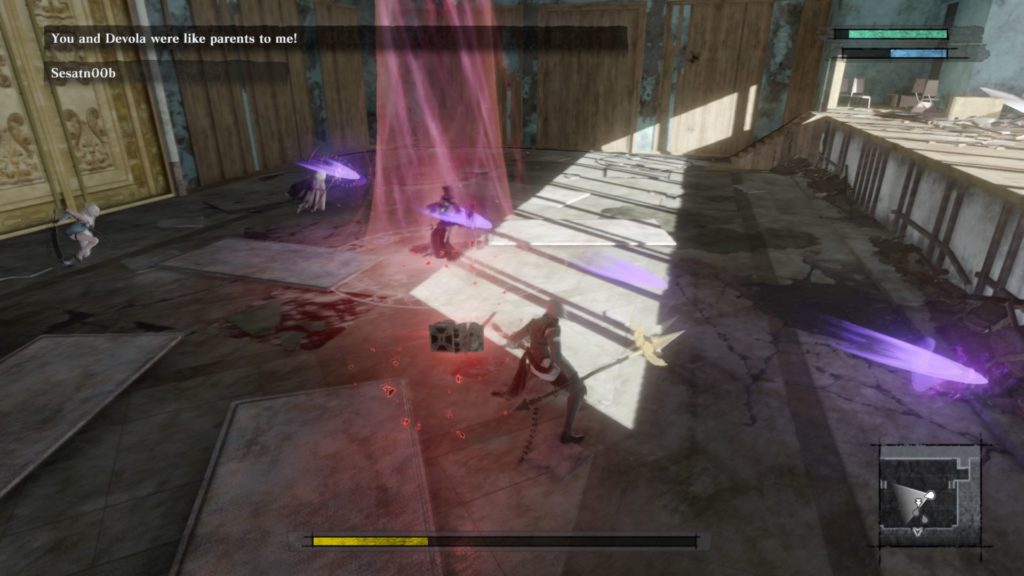 Head to the main boss

After escaping from Popola, you have to get to the main boss room.

Along the way, you have to take out the Shades to unlock the doors. 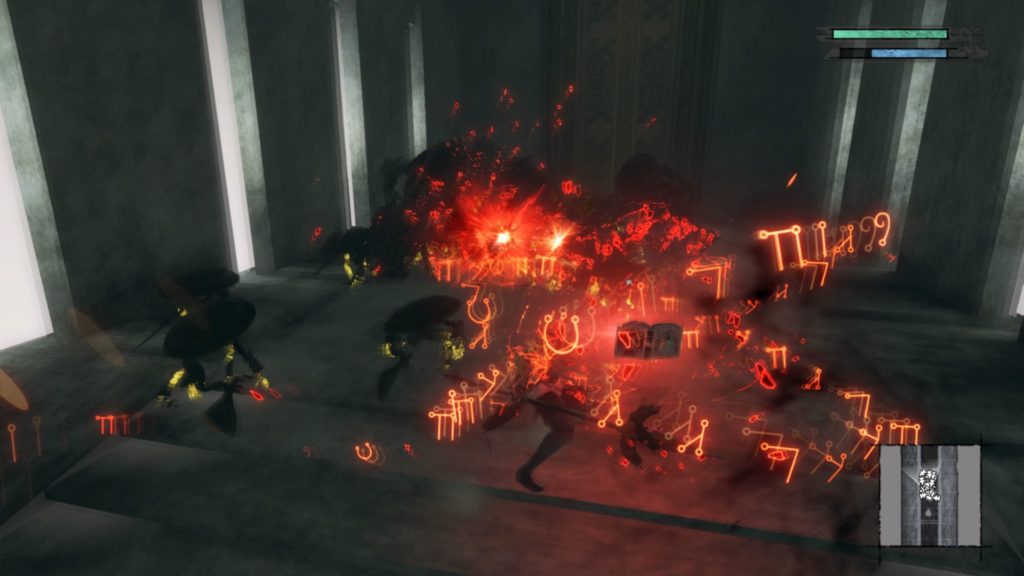 Once you’re in the boss room, you have to fight Noir first.

Use melee to damage him. 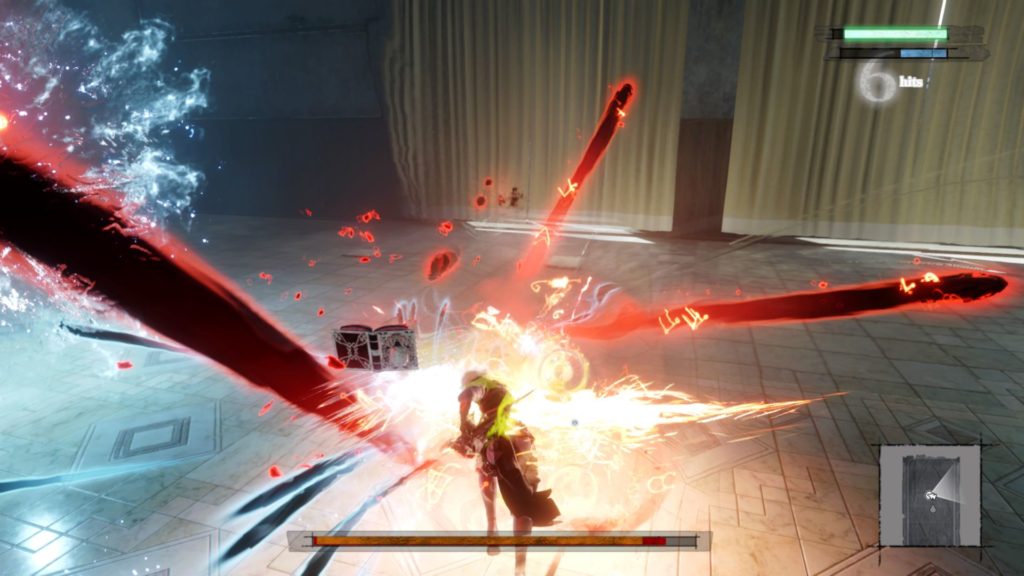 Finally, you have to defeat the Shadowlord (Gestalt Nier). He attacks very quickly and it’s easier to use Dark Blast constantly.

Once he finishes his combo attack, you have a small room to melee him. 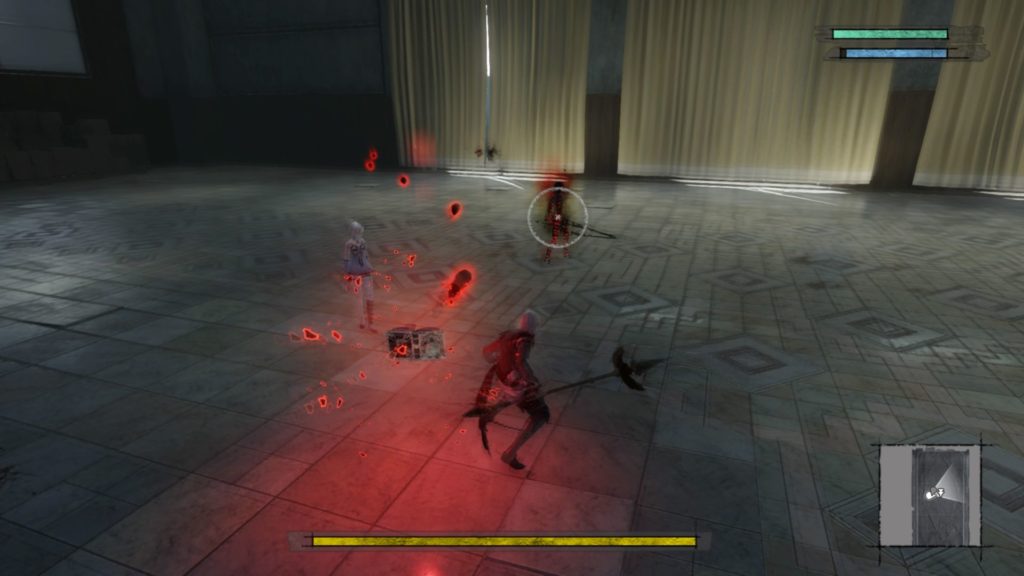 After bringing his health to a certain point, the Shade inside Yonah’s body decided to kill herself by basking in the sunlight, as she wanted Yonah to be reunited with her brother.

The Shadowlord will then rage and the battle continues. He’ll fly a lot during this part. 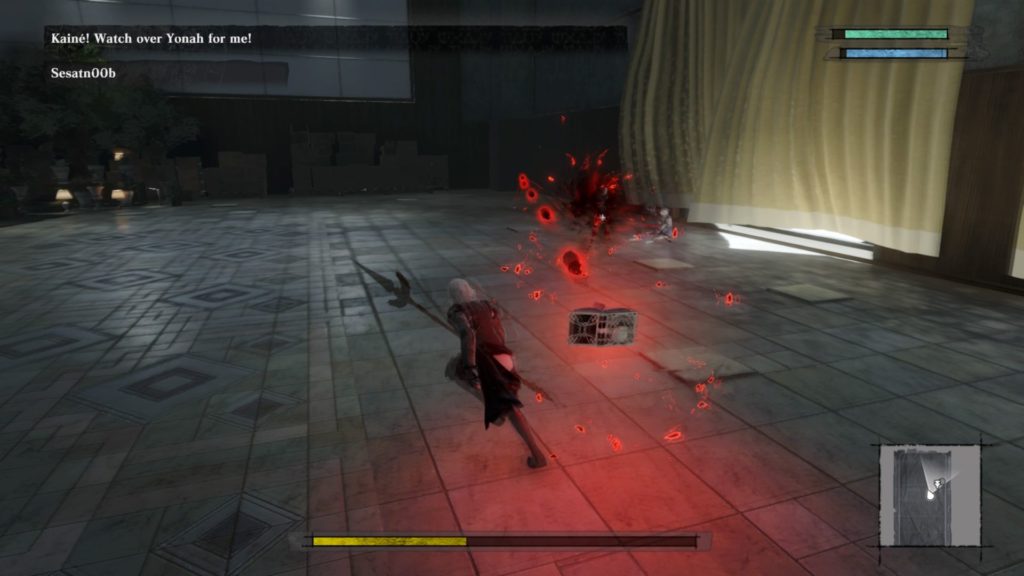 At the end of the fight, Grimoire Weiss loses his powers.

You’ll then be given a chance to defeat the boss with melee alone. 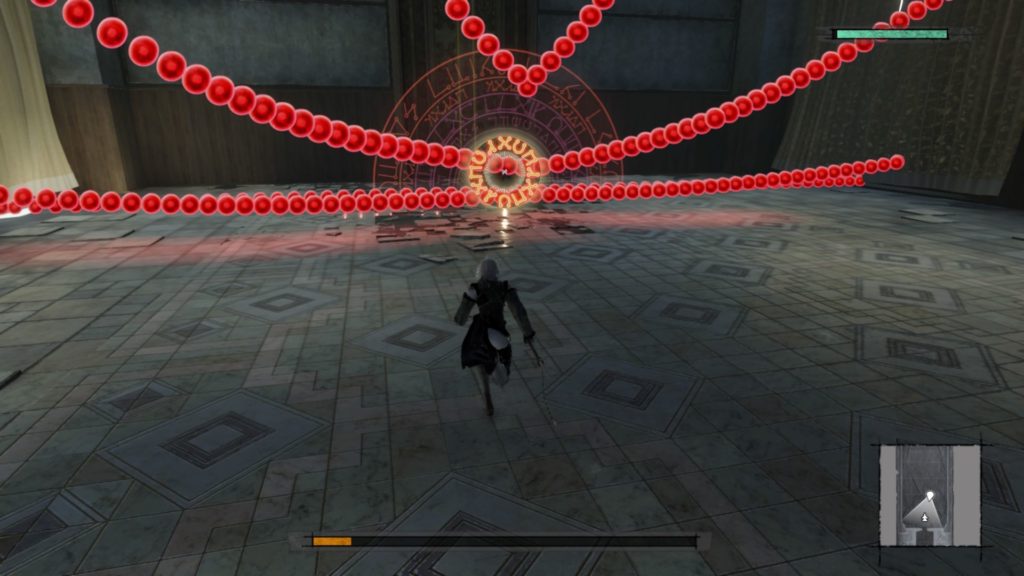 After the fight, Yonah comes back to her body and Kaine decides to leave for personal reasons.

We also see Gestalt Yonah and Gestalt Nier reuniting in the light. 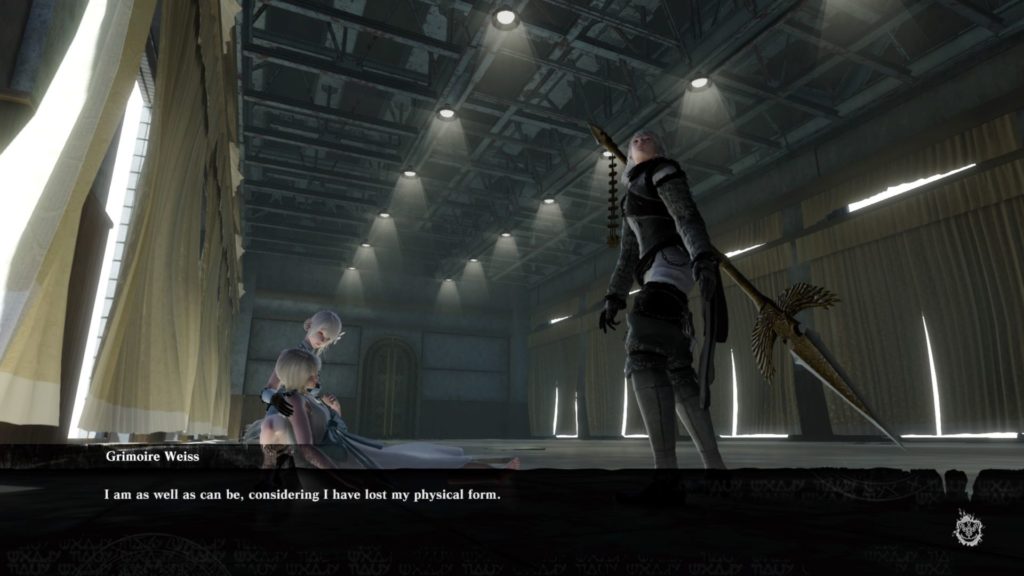 After the game, you can save the game on another slot. To get ending B, you have to play the game again with the newly saved slot.