Just For Relaxation (1938) is one of the final missions in Mafia: Definitive Edition.

Your task is to steal shipments of Cameroonian cigars from the Federal Customs.

Here’s a walkthrough of Just For Relaxation in Mafia: Definitive Edition. 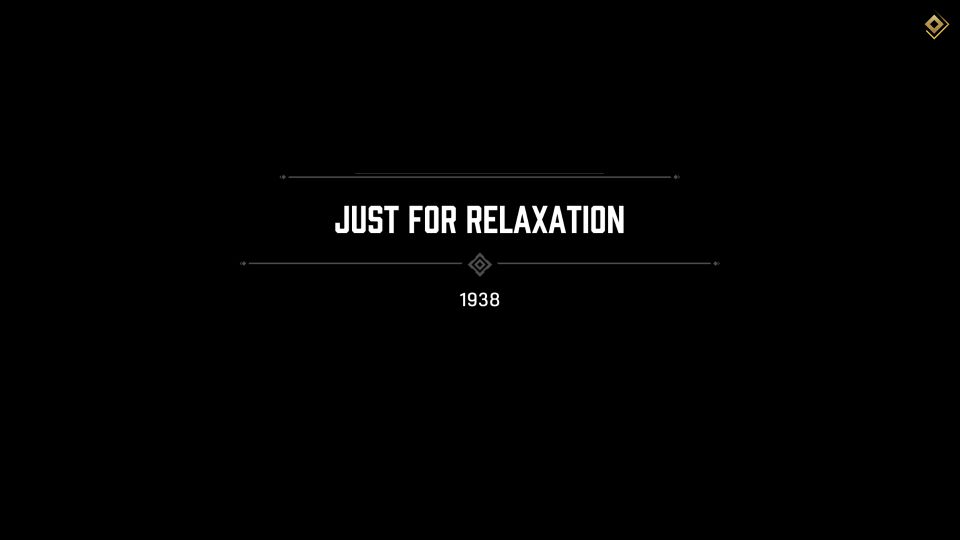 Get in the car

After the cutscene, get into the car with Paulie and Sam. 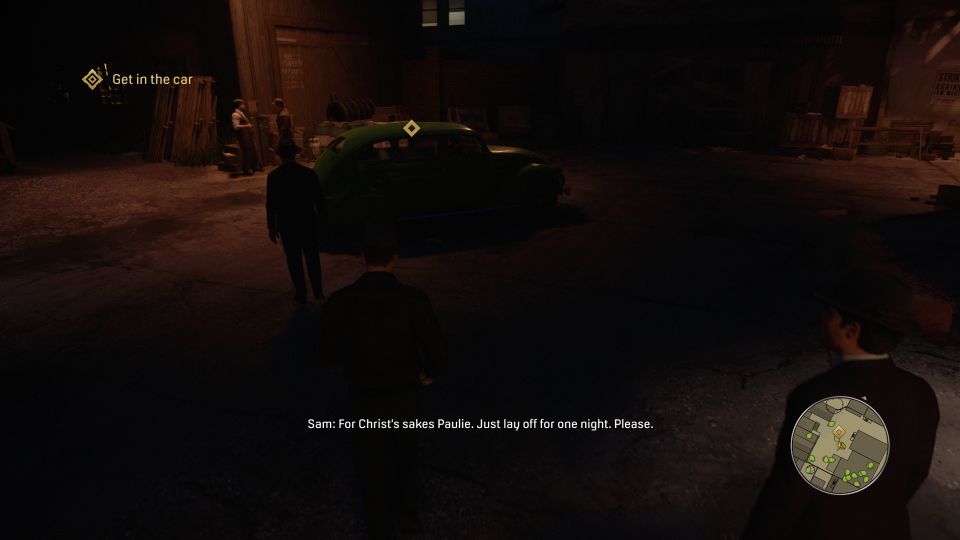 There’ll be another cutscene where Paulie says he wants to rob a bank, without the permission of Salieri.

Sam and Tommy however aren’t eager to think about it. 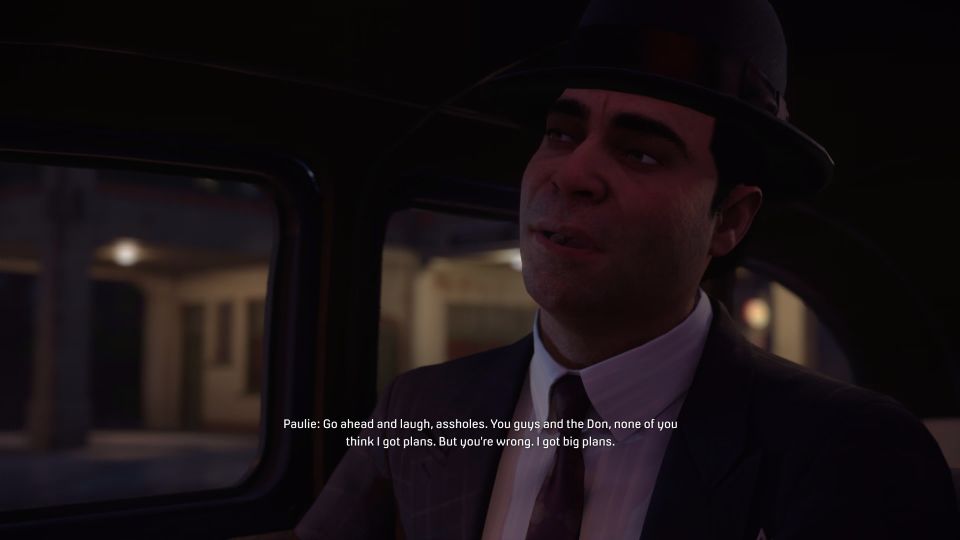 You can find a customs truck at the exact location shown below, marked by the player location. 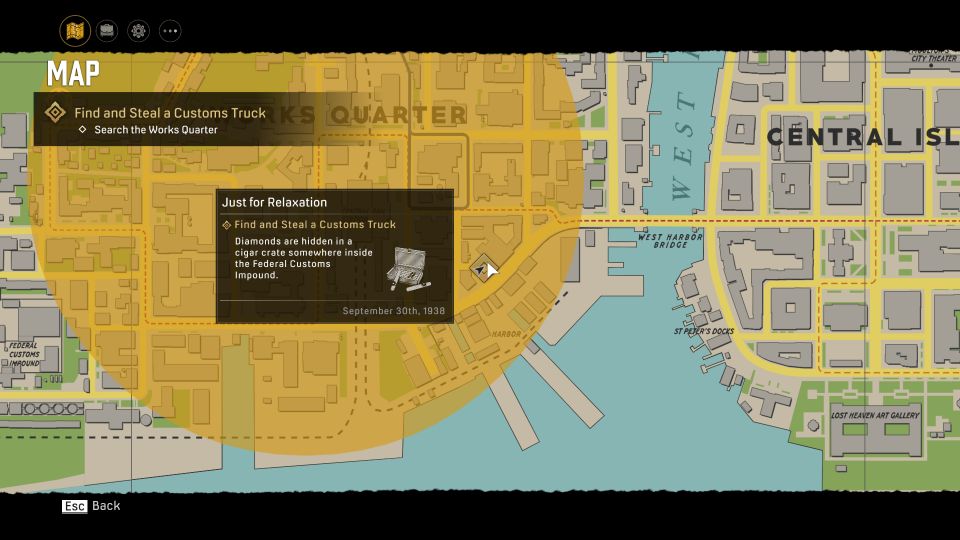 You will see it parked inside a compound. 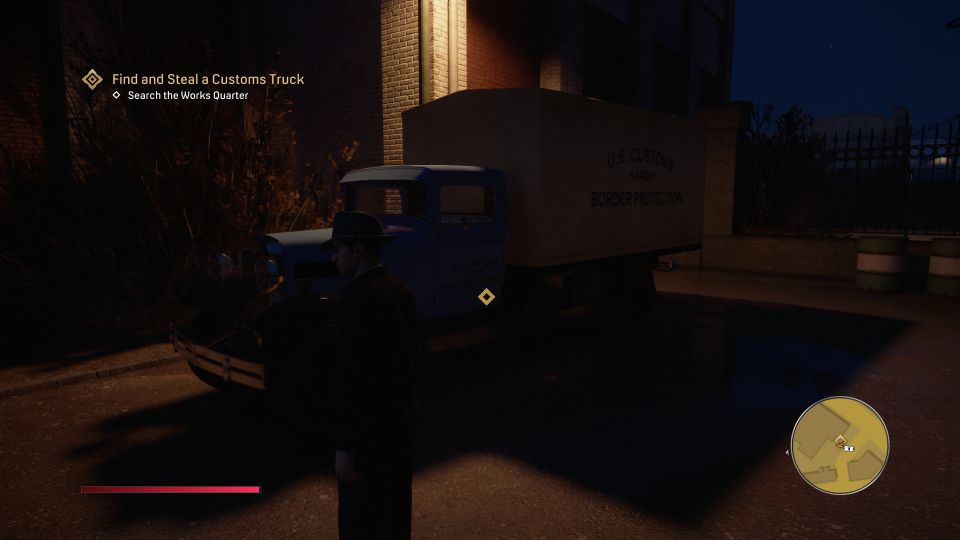 Drive to Sam and Paulie

Get into the truck and drive it to Sam and Paulie near the impound. 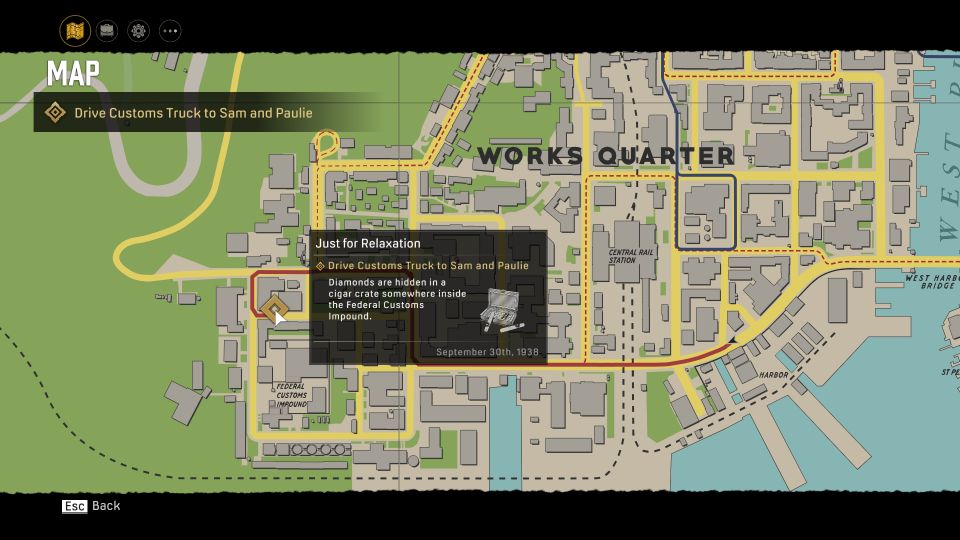 After reaching, you just have to sit behind the truck and listen to the conversation. 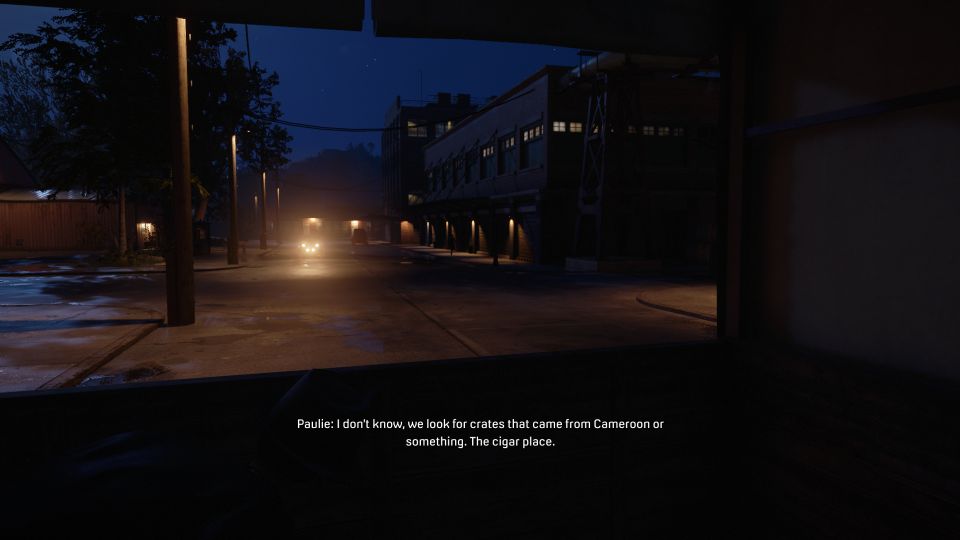 Find a way into the Customs impound

After getting off the truck, go to the right and climb over the wall. 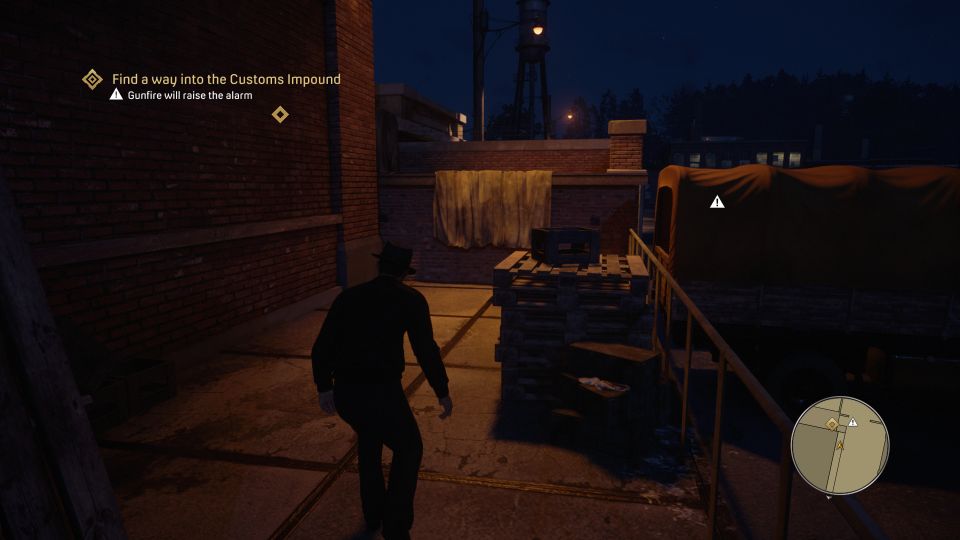 Here, you need to watch out for those with guns. They are marked with the exclamation symbol above their heads.

Don’t let them see you. 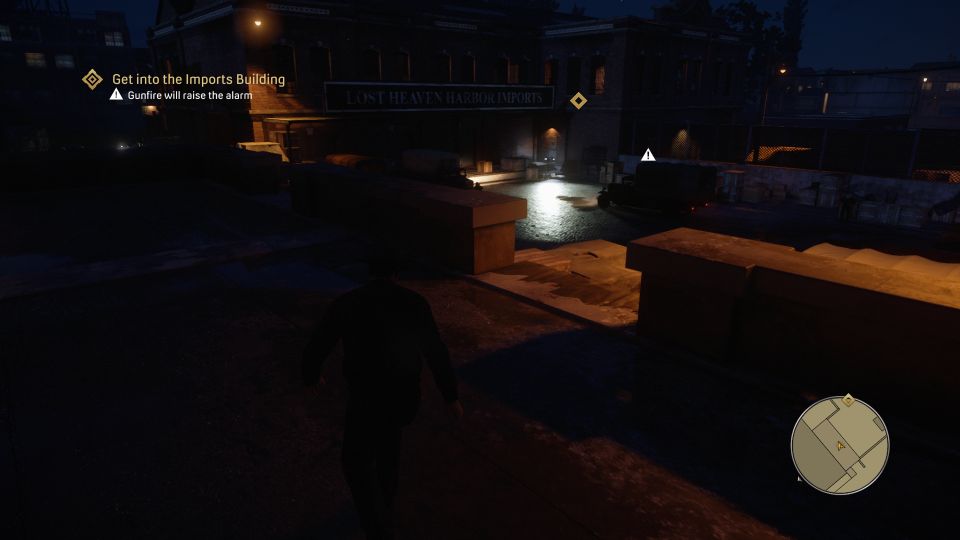 Go towards the left side and hide behind the trucks while the guy looks elsewhere.

There is also another person who is just loading stuff on the truck. You can attack him with your fists and it shouldn’t alert the guard. 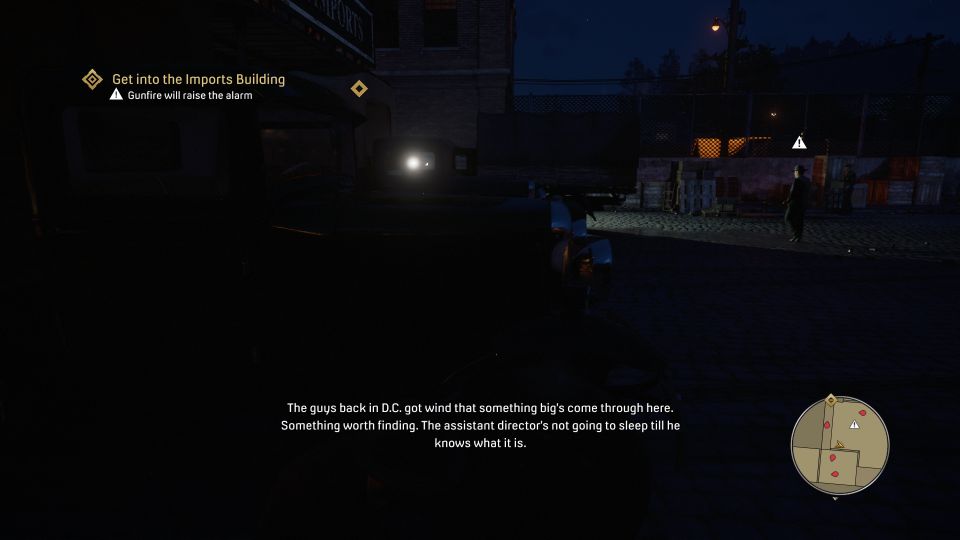 Once the guy is down, head to the door. 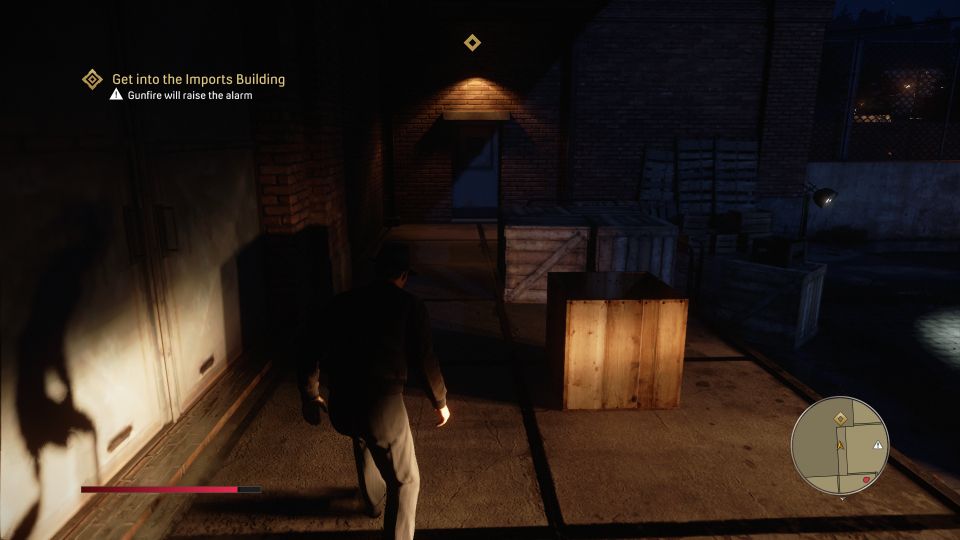 Search for the cigar shipment

Inside the building, look for clues on where the cigar is.

The first clue you find will tell you that the cigar is in the warehouse. 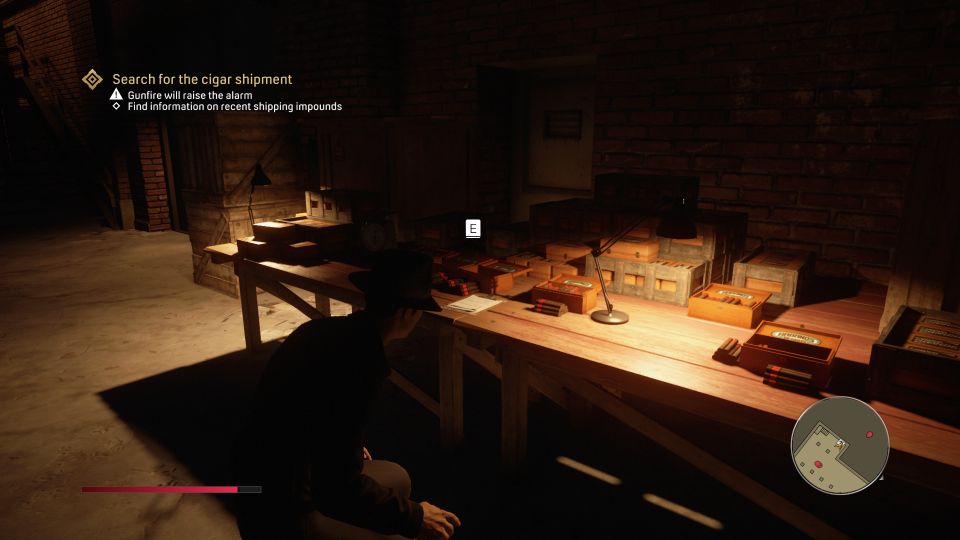 Continue walking on the upper floor and take out the guy with the gun. 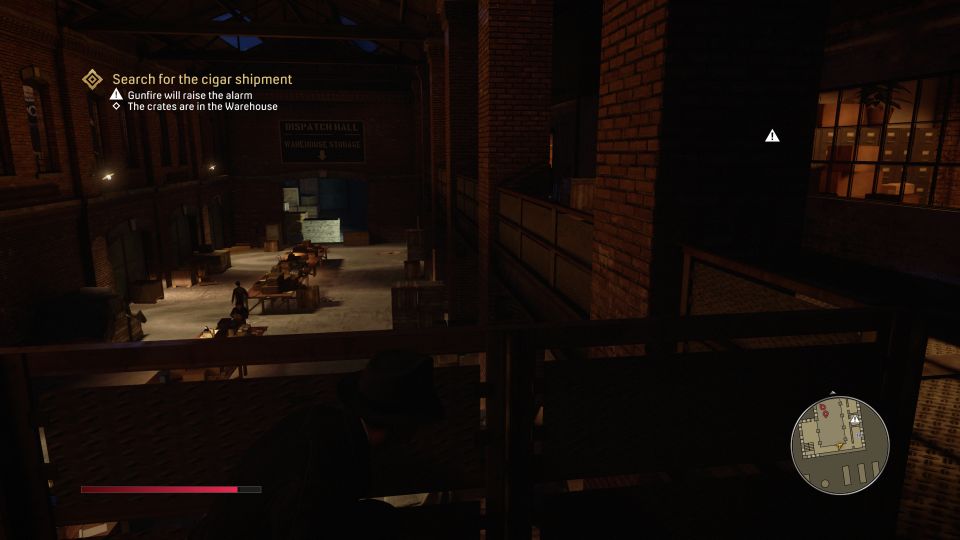 Inside the room near the guard, you will find that the cigars are in sector D2. 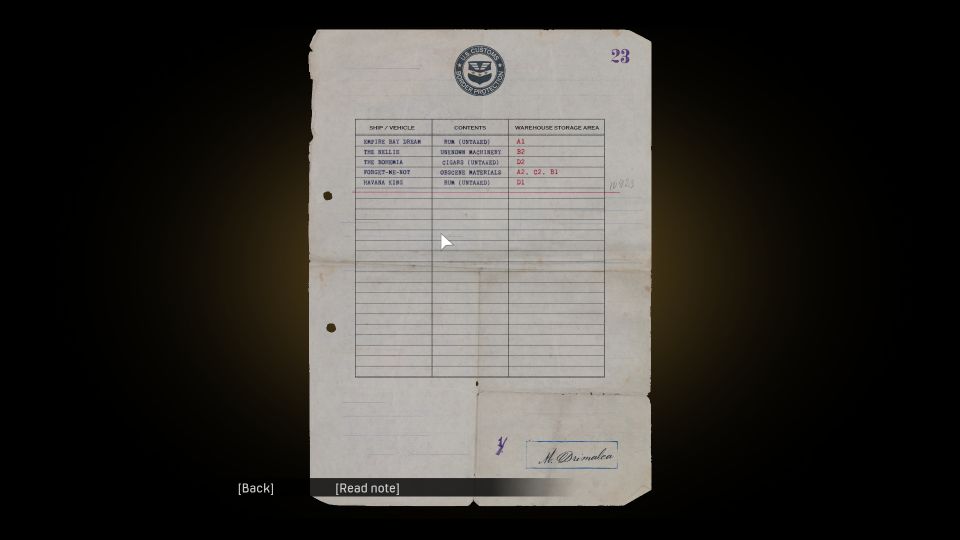 For the other two guys downstairs, you can get rid of them by punching. Don’t use a gun.

Next, head to the warehouse. 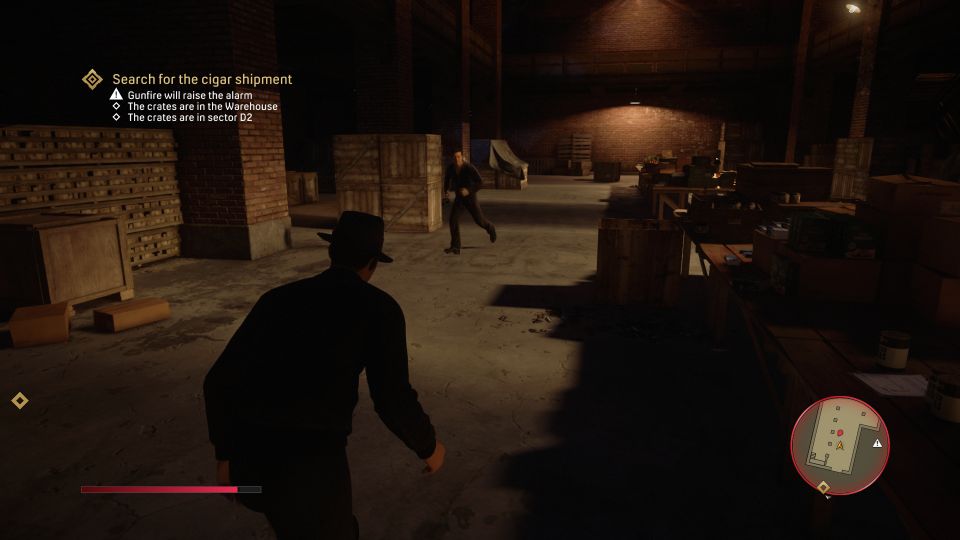 You will then reach an outdoor area. You need to get up the stairs but there is one guard.

Take him out first. 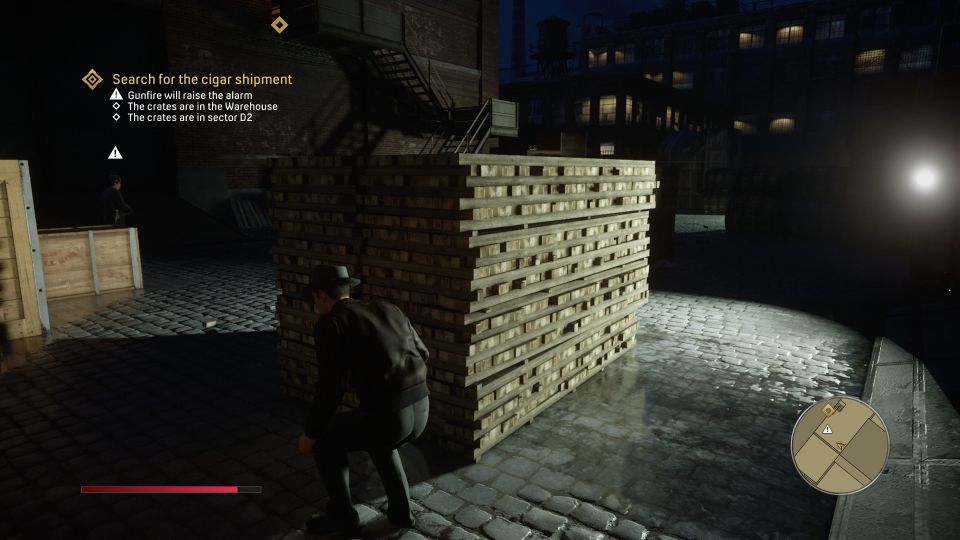 After the area is secure, go upstairs. 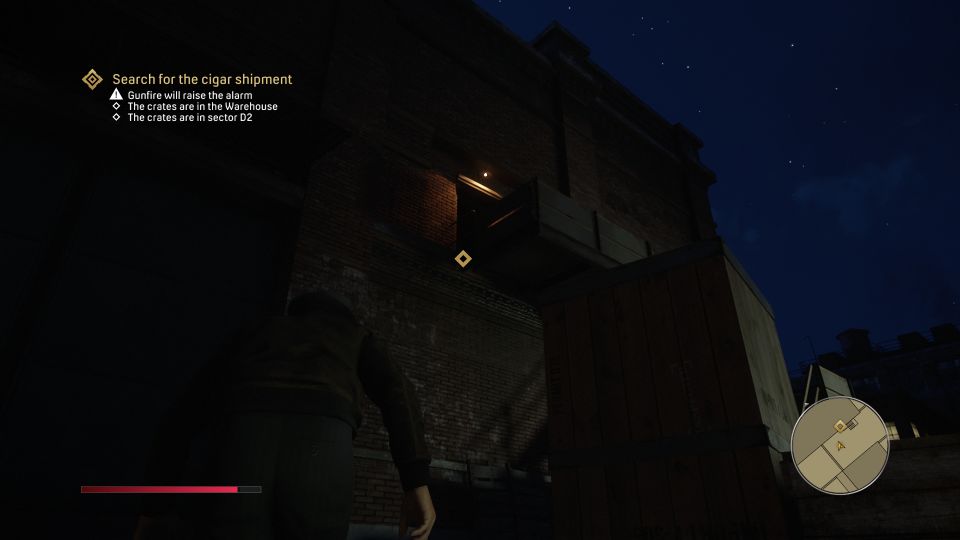 In the warehouse, there are more clues but they are not necessary to check. Get past the middle upper walkway. 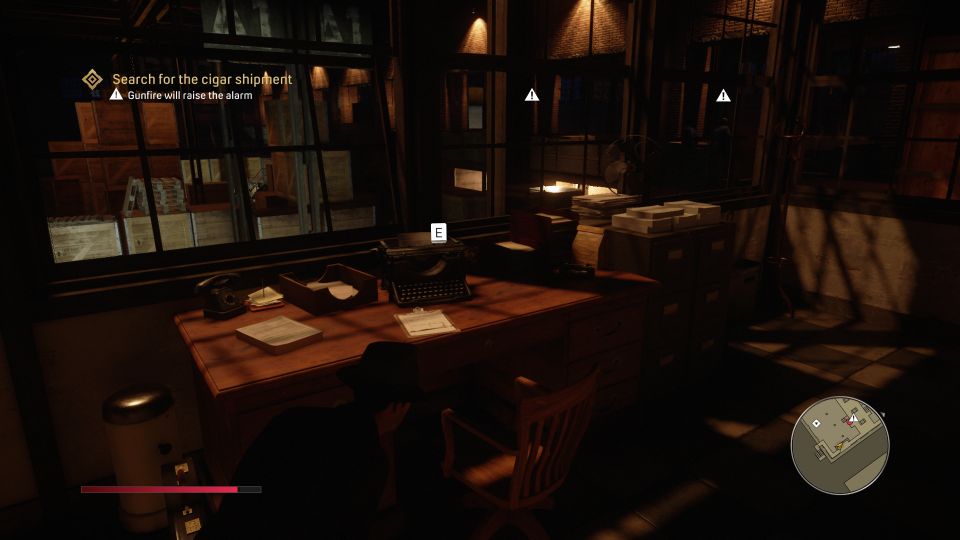 You will see three guards here. Don’t do anything to them. Just walk past them when they’re not looking and go downstairs. 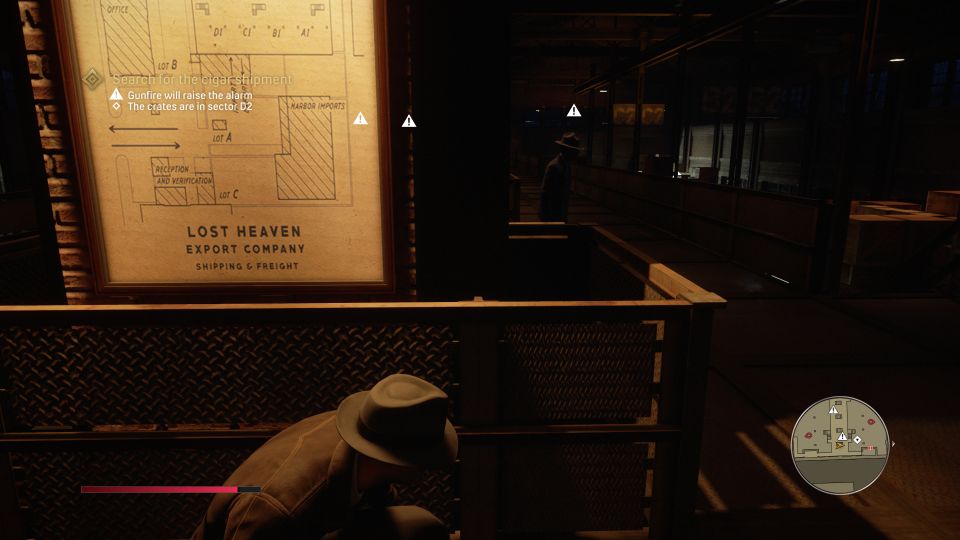 At the bottom floor, you will find more guys who are just loading stuff.

Similarly, you can take them out either stealthily or by punching them. It shouldn’t alert the guards up there. 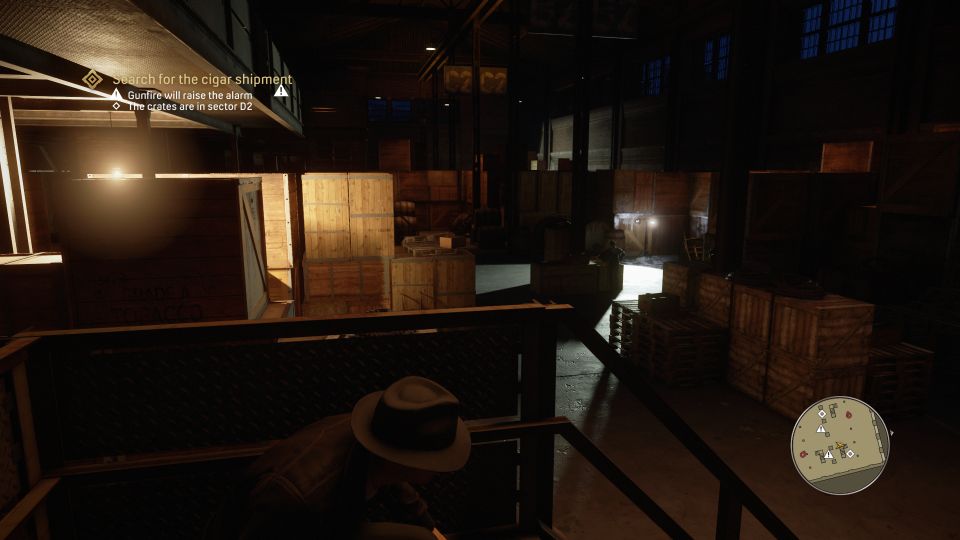 Now, head to D2 which is all the way to the end. The crate in the area which is rather bright is the one with the cigars. 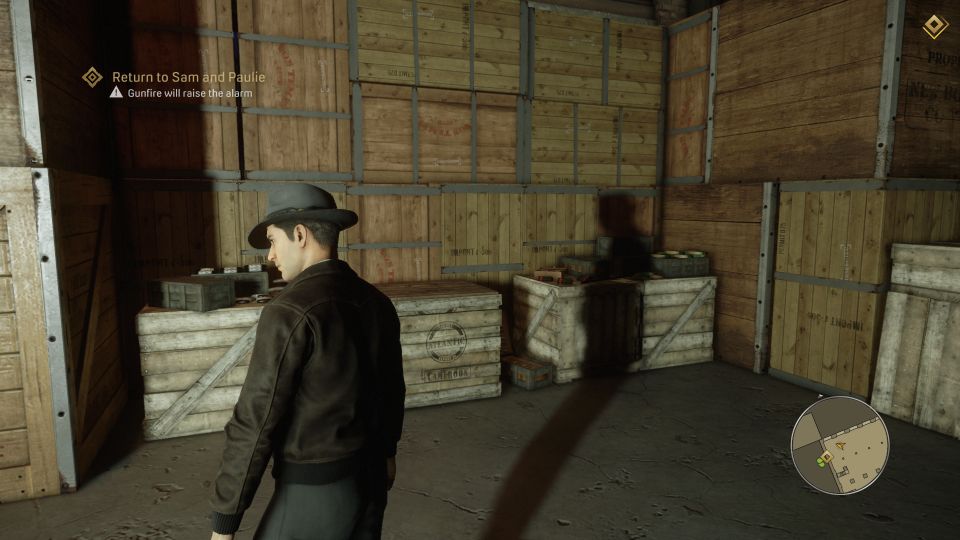 Leave the warehouse using the door near the cigar and you’ll meet Paulie and Sam.

Drive the truck away from the impound. 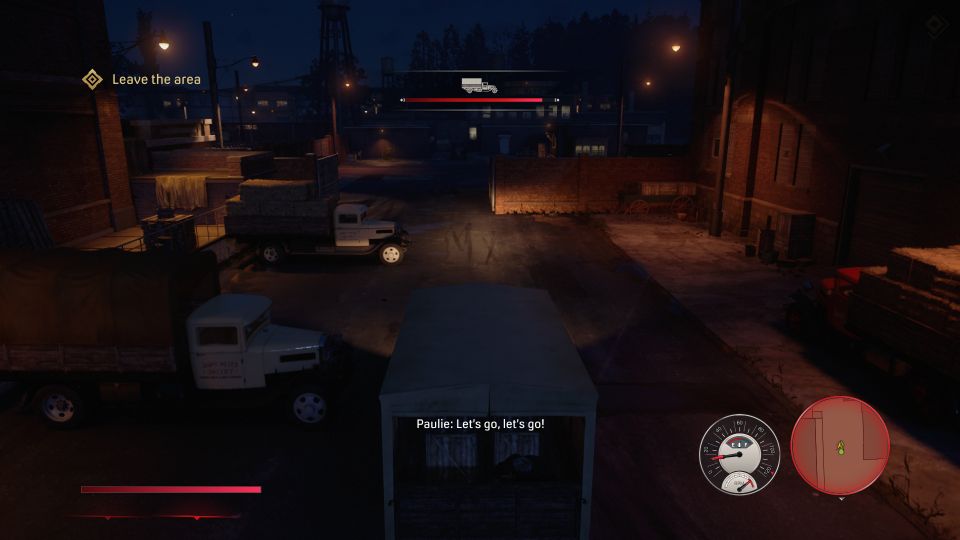 You need to avoid all roadblocks. Just check the map to see which area is blocked and use another route.

Get out of the big circle marked on the map and you’re free.

After escaping, drive the vehicle to Salieri’s warehouse. 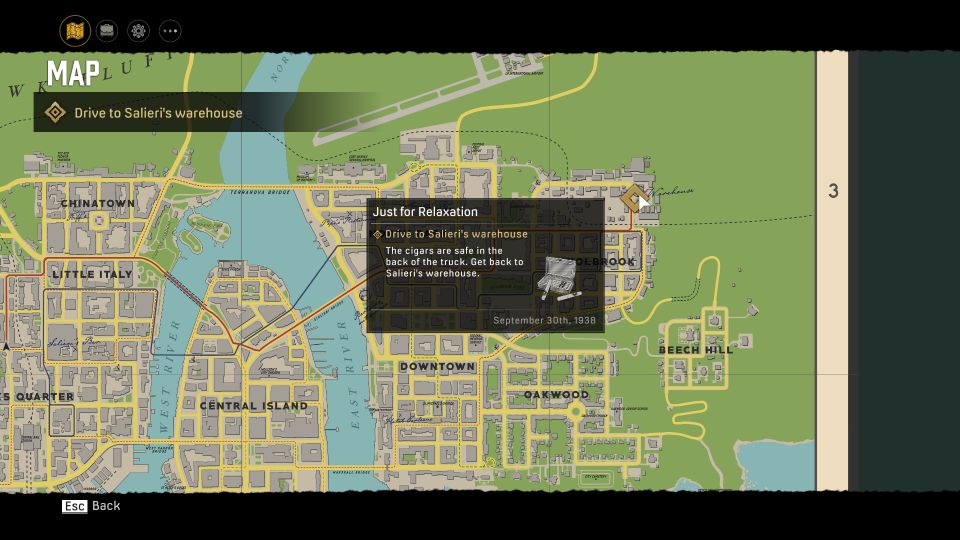 Walk with Paulie to the train station

Next, walk with Paulie to the train station as the two will discuss more on the bank heist. 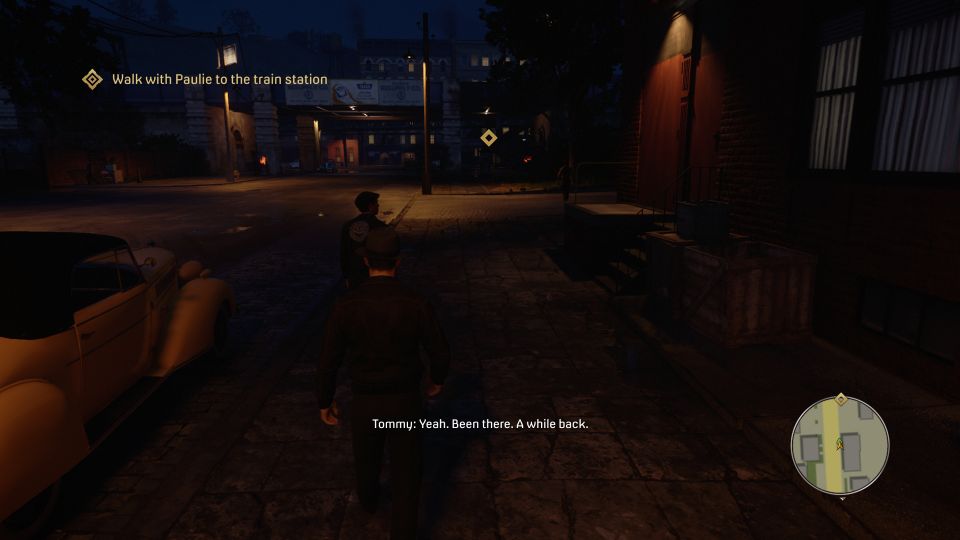