Time and the Wind is a World Quest available in the Anemo region of Genshin Impact.

Your task is to figure out the puzzle in the unnamed island and defeat the wind monster.

Here’s a walkthrough & guide of Time and the Wind in Genshin Impact.

This quest is recommended for those level 40 and above. Before you begin, resonate to Anemo / maintain Anemo first.

How to reach the island

The unnamed island is east of Starsnatch Cliff. The exact location is shown in the map below, marked by the player location. 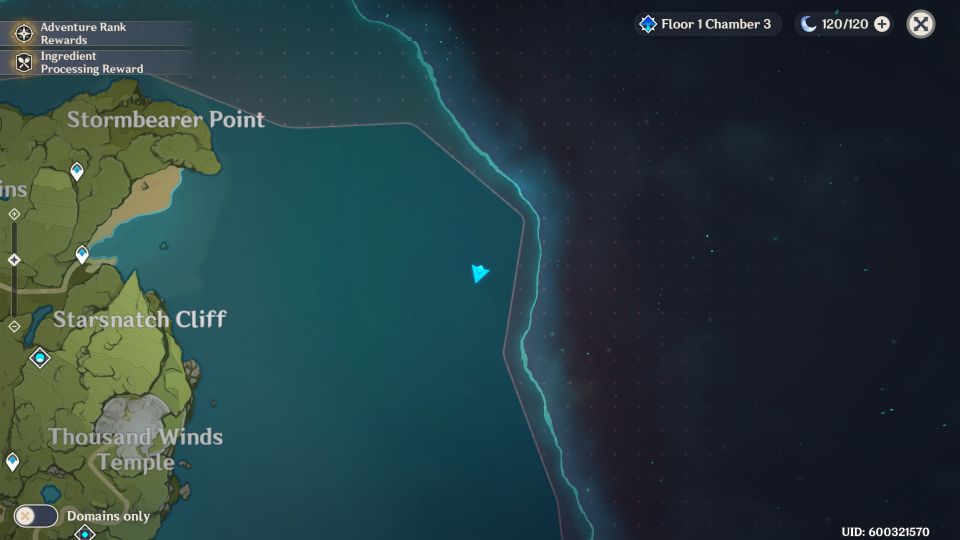 There are two main ways to get there. One way is to glide from Starsnatch Cliff all the way to the island.

You should aim for at least 200 stamina before doing this or you might fall in the water. 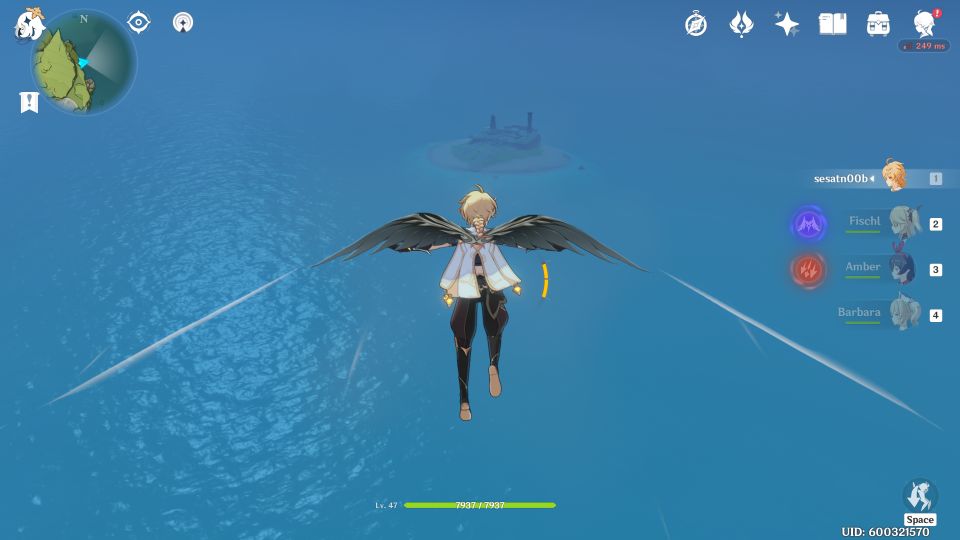 Luckily, there’s a way to ensure you get to the island. Cook a Delicious Northern Smoked Chicken or some other dish that restores stamina.

You can eat it mid-flight and you’ll surely reach the island. 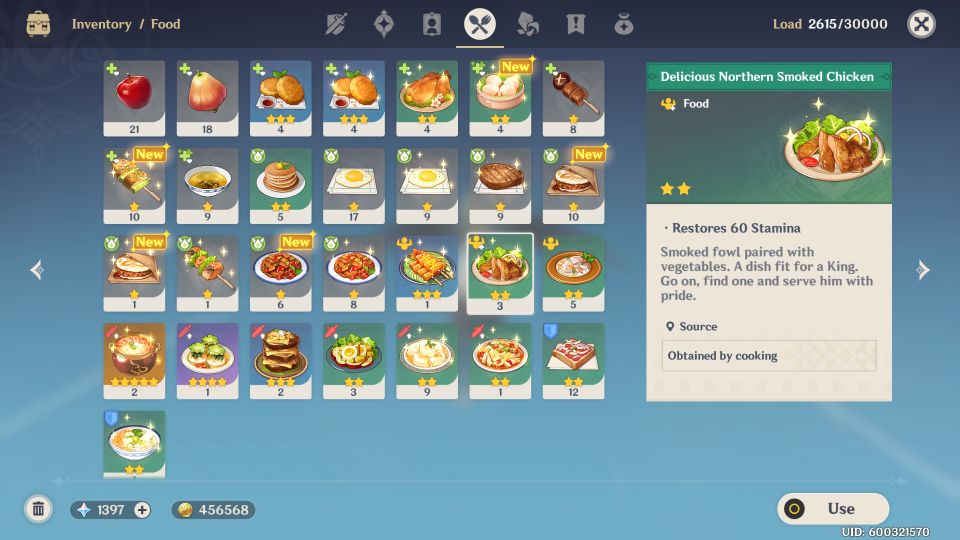 The second way of reaching the island is by using Kaeya and then cryo all the way, which takes a long time.

Once you’re on the island, look for the sundial.

Read the Ravaged Carving to get a clue. 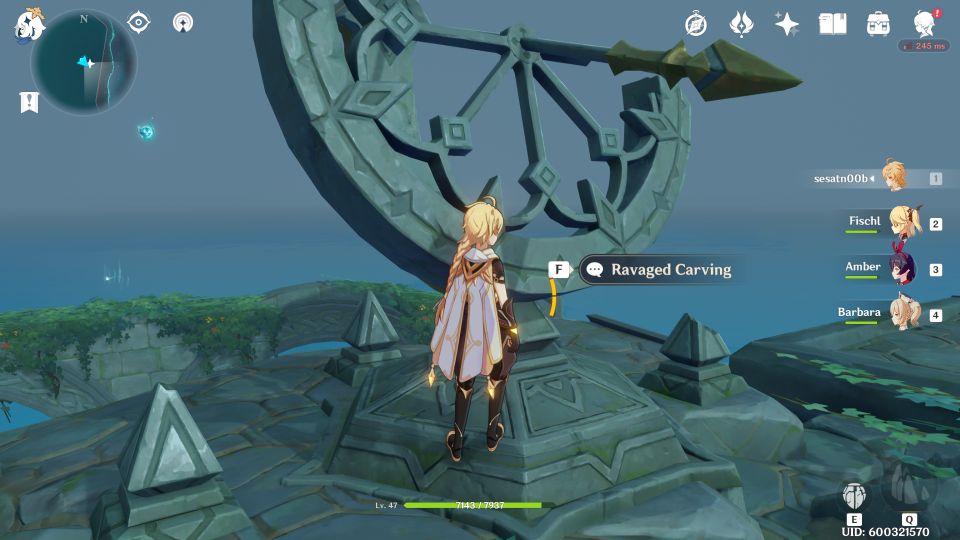 Uncover the secret of the uninhabited island

Next, look for the campsite on the beach just beside the ruins. You should see some breakable rocks. 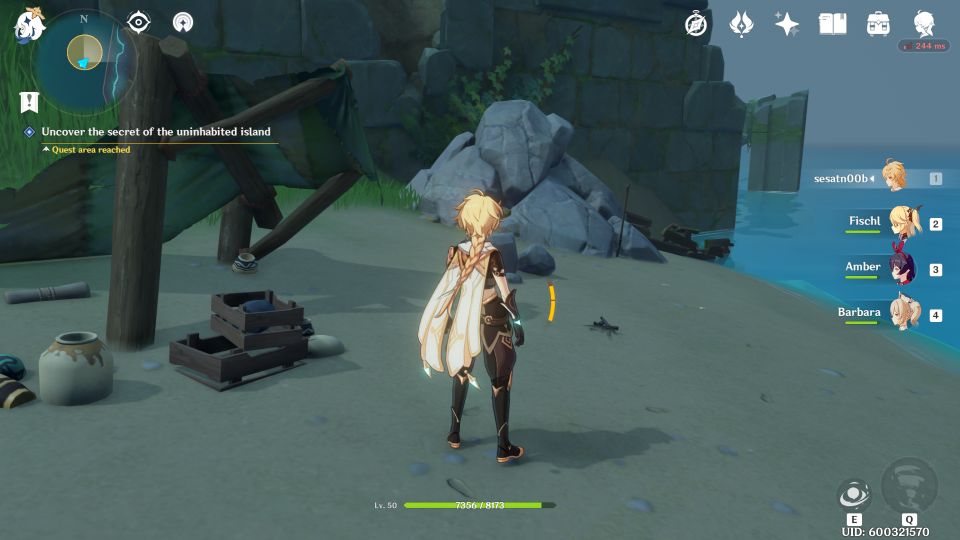 Destroy the rocks and pick up the Ragged Notebook. You’ll get a hint if you read the book in your inventory. 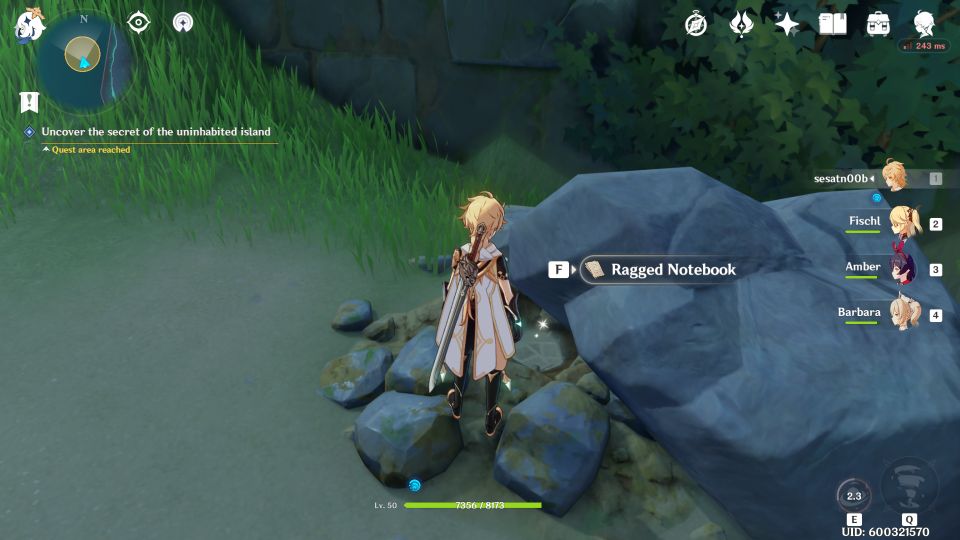 Observe the shadow on the sundial

To proceed, change the time to 2 am. This part of the quest can only be done in between 2 am to 5 am.

If you fail to complete it in time, you can always change the time to 2 am again and pick up where you left off. 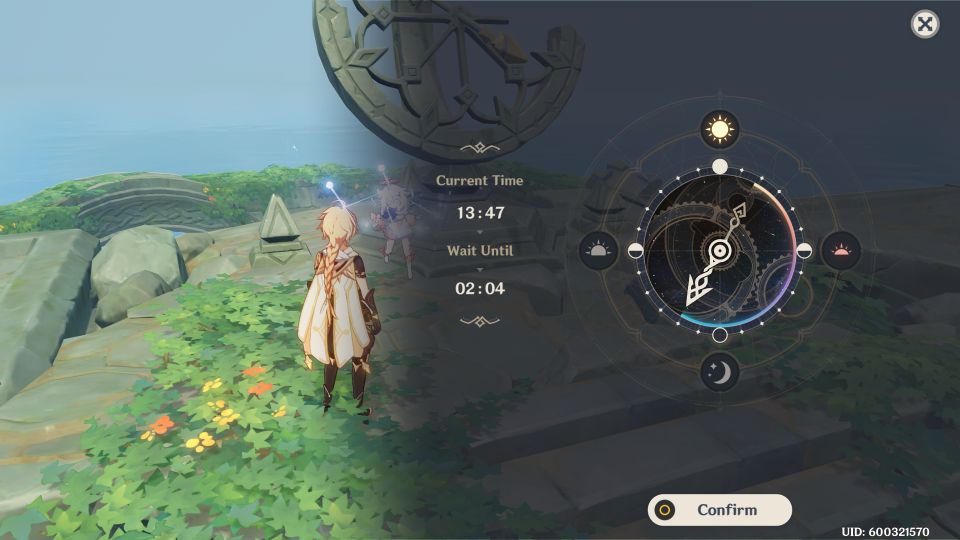 You then have to destroy four wind orbs in the area. 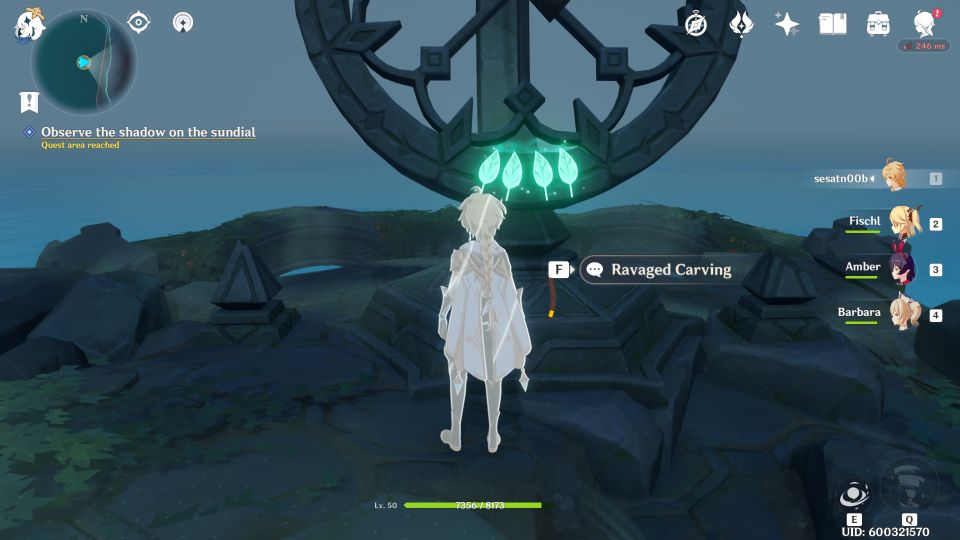 The first wind orb is just behind the sundial. You can only see it in elemental sight.

To destroy it, use your Anemo wind blast. 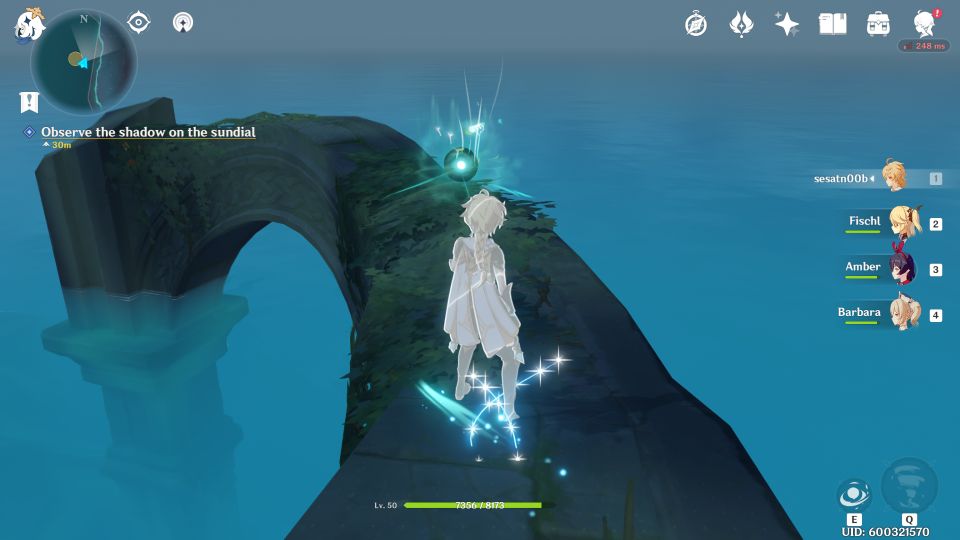 Two more wind orbs are just outside the beach area. 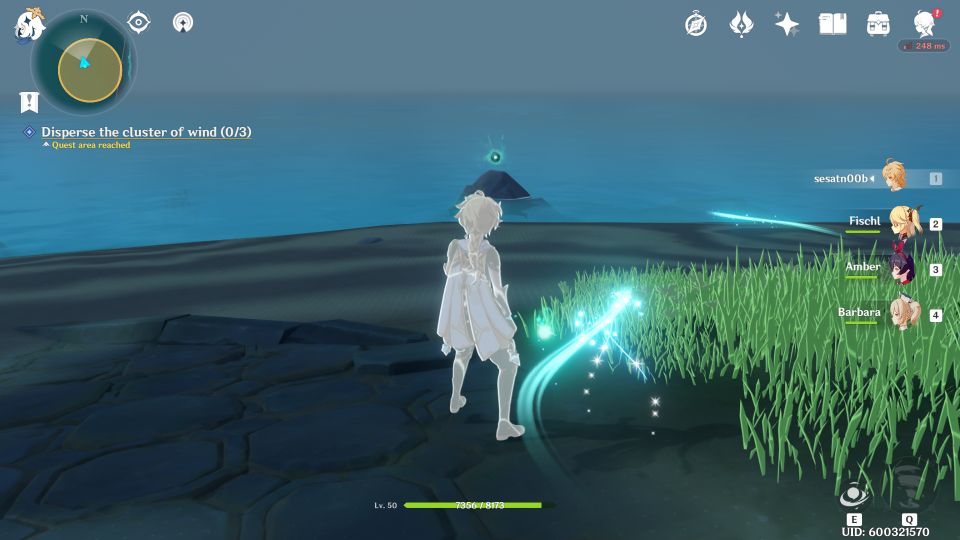 Out of the two, one of the orbs are located deeper into the water. 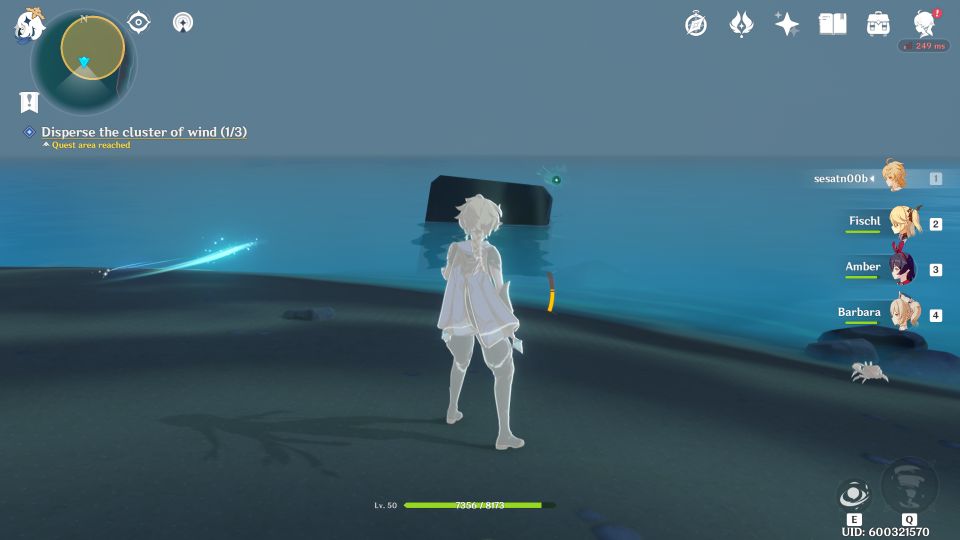 To reach it, use Kaeya to freeze the water and then use your main character to blast the orb. 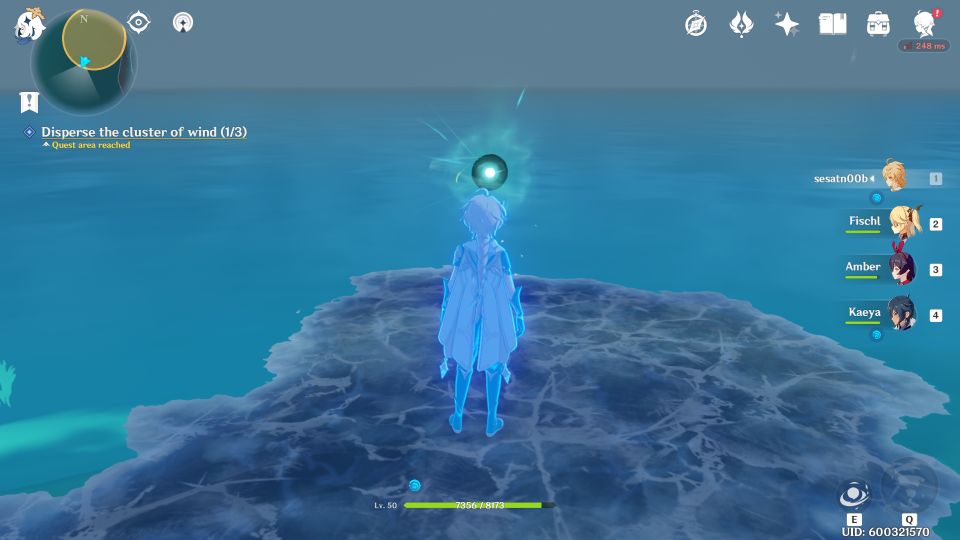 The final orb is located at the top of the pillar. 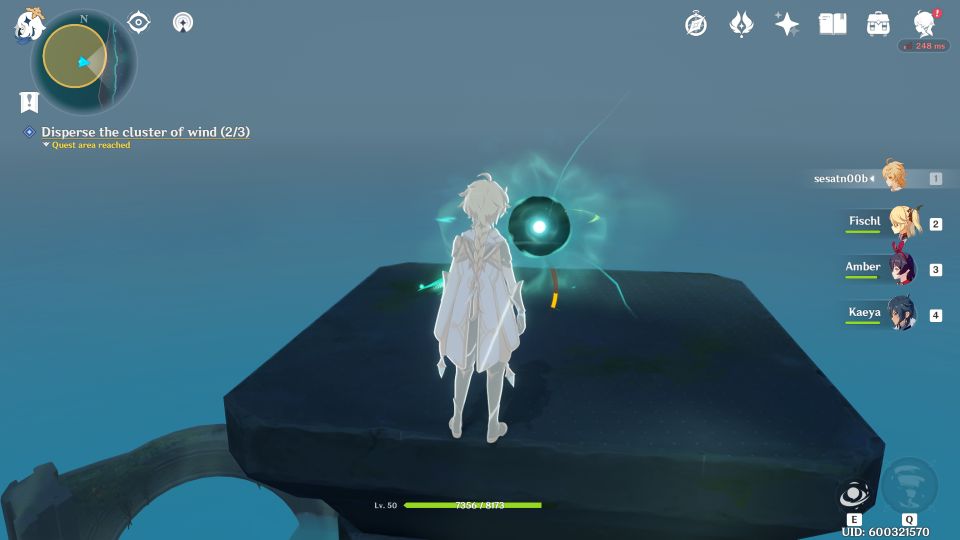 Scatter the deposit of wind

Once you’ve destroyed all four wind orbs, a big gust of wind will appear.

Use your wind skill to blast the wind barrier guarding the seal in the middle of the ruins. 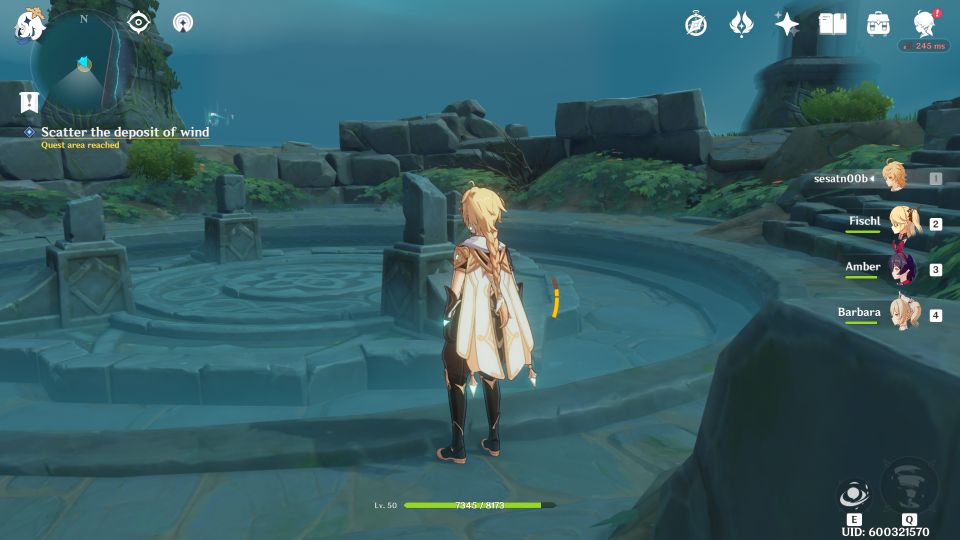 Defeat the Eye of the Storm

An Eye of the Storm will spawn. You have to attack it until its HP is low.

It’s easier to use an archer for this boss. 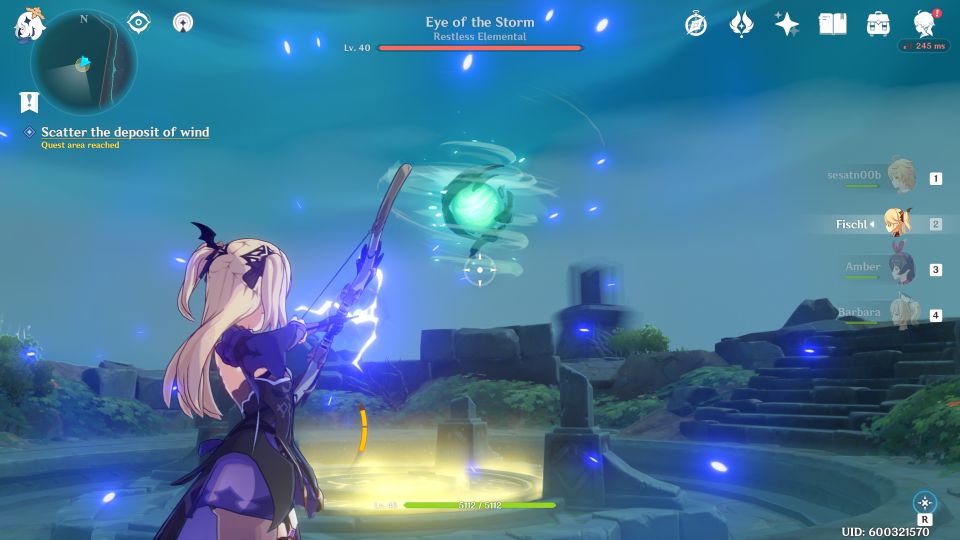 Pursue the Eye of the Storm

After the HP is low, it will flee. 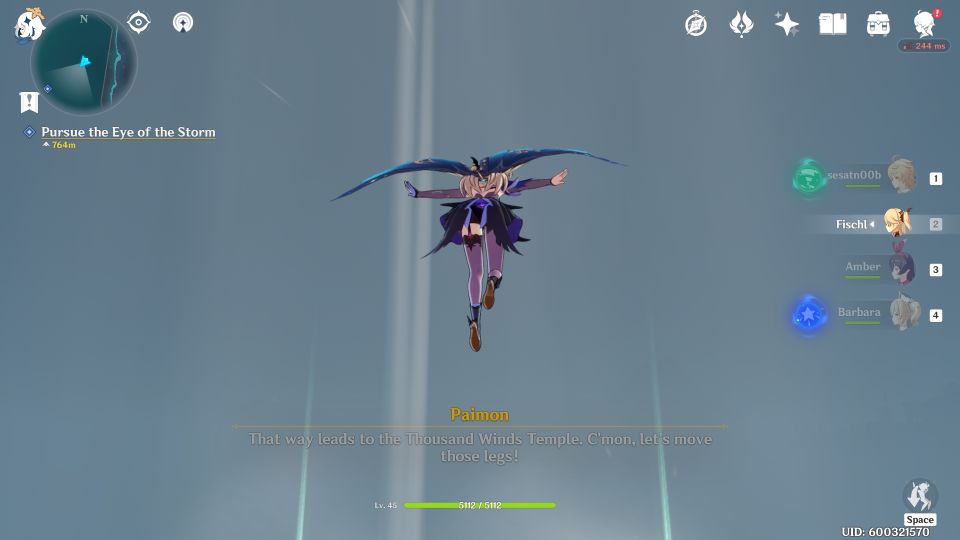 From the top, you can see the wind rings in the sky. Glide following the rings. 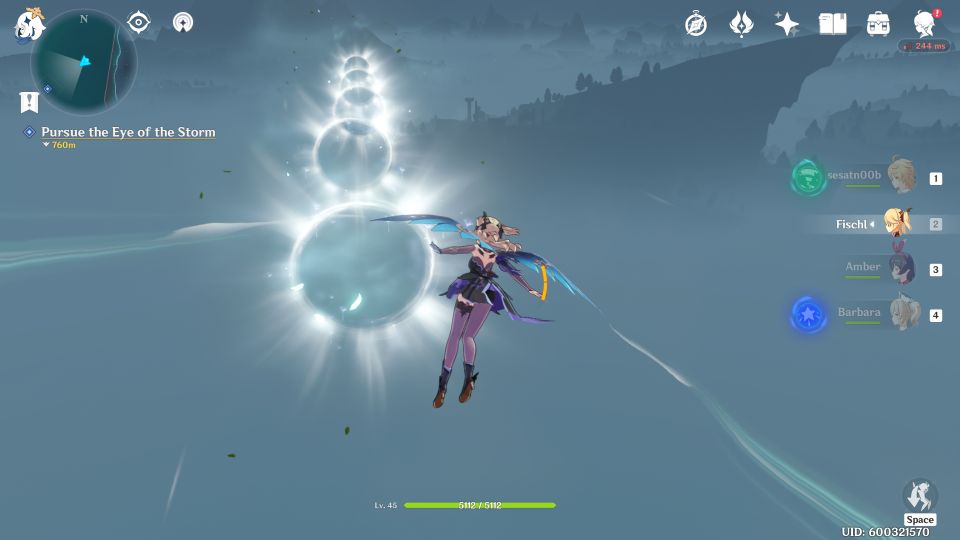 You will then reach another sundial. Defeat the hilichurls first. 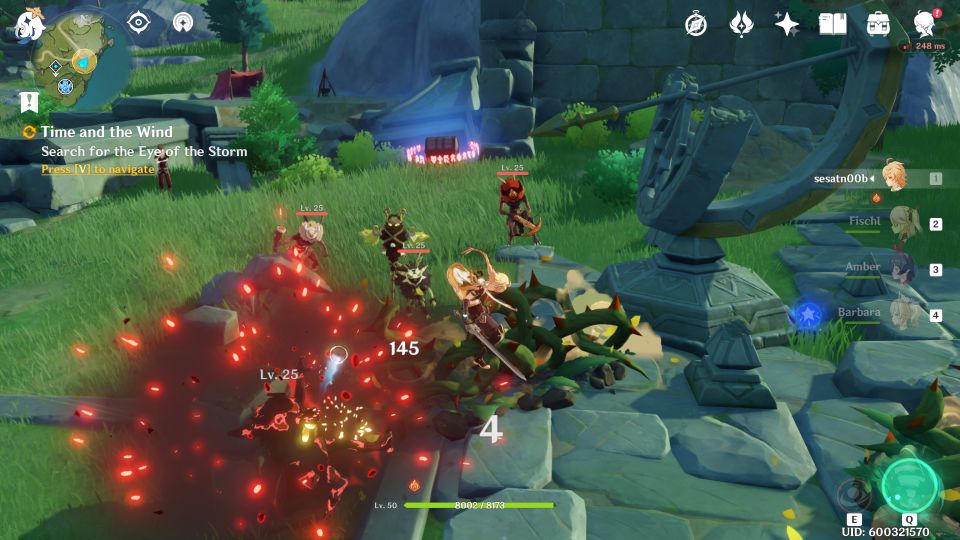 Search for the Eye of the Storm

You have to search for the boss. Talk to Henry Morton first. 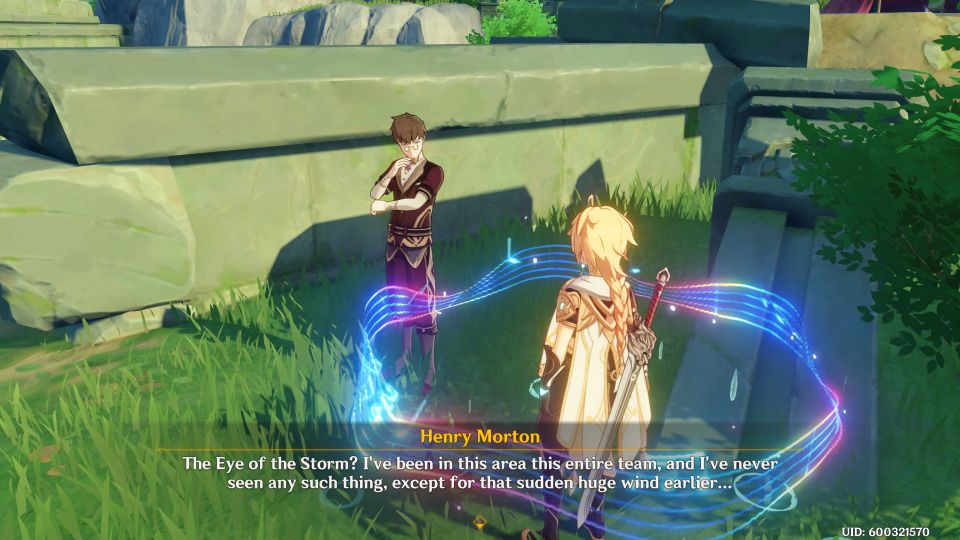 Pick up the Thick Notebook in his camp site. 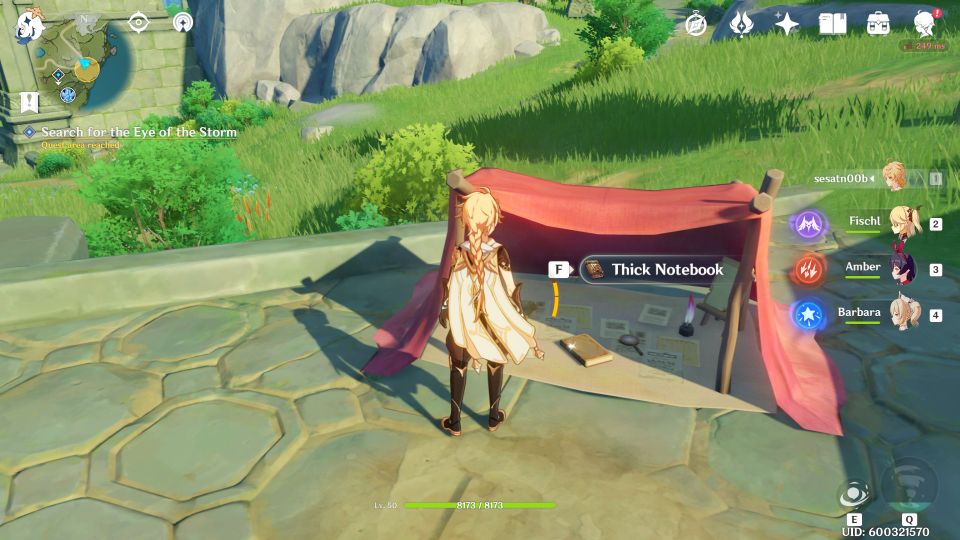 Once again, change the time to 2 am to see the orbs. 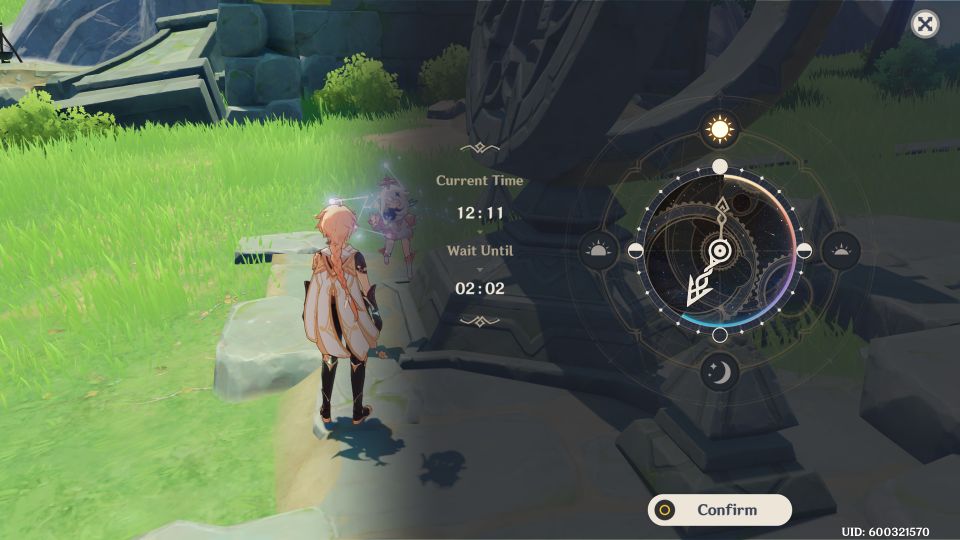 You should see another four orbs in the area. Three are surrounding the sundial. 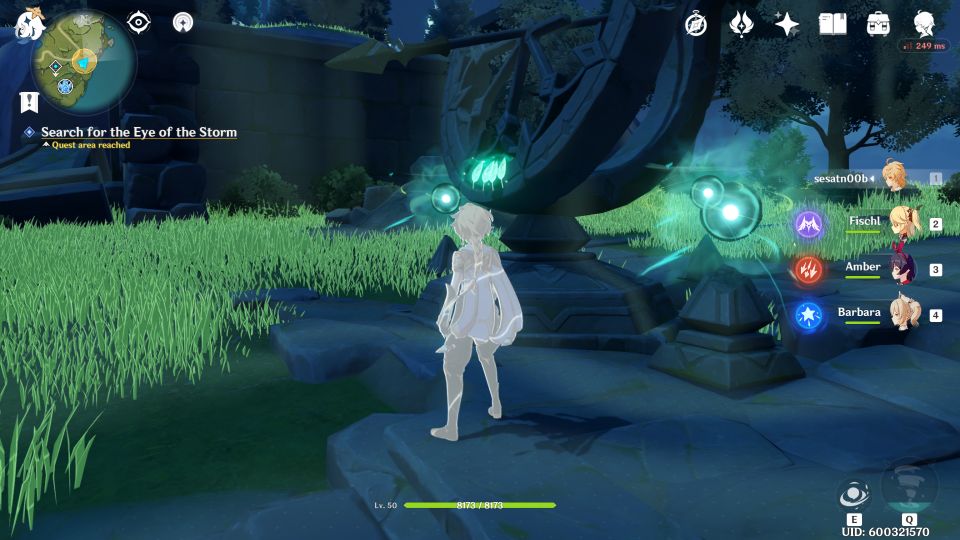 The fourth orb is just in front of the sundial. Destroy all of the wind orbs to summon the Eye of the Storm.

This time, some mobs will also interfere with the battle. 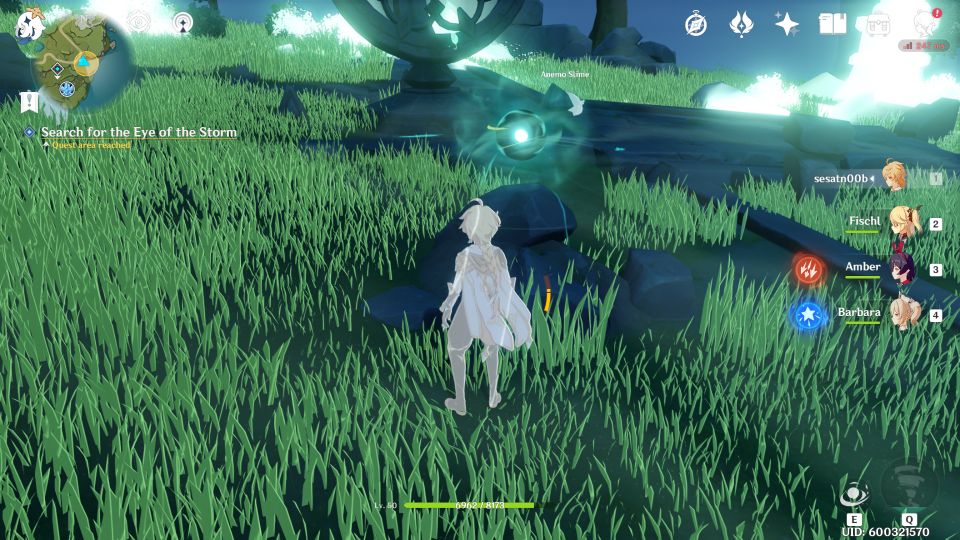 Defeat the Eye of the Storm

You have to start the battle from scratch again. This time, it has the help of some mobs like slimes. 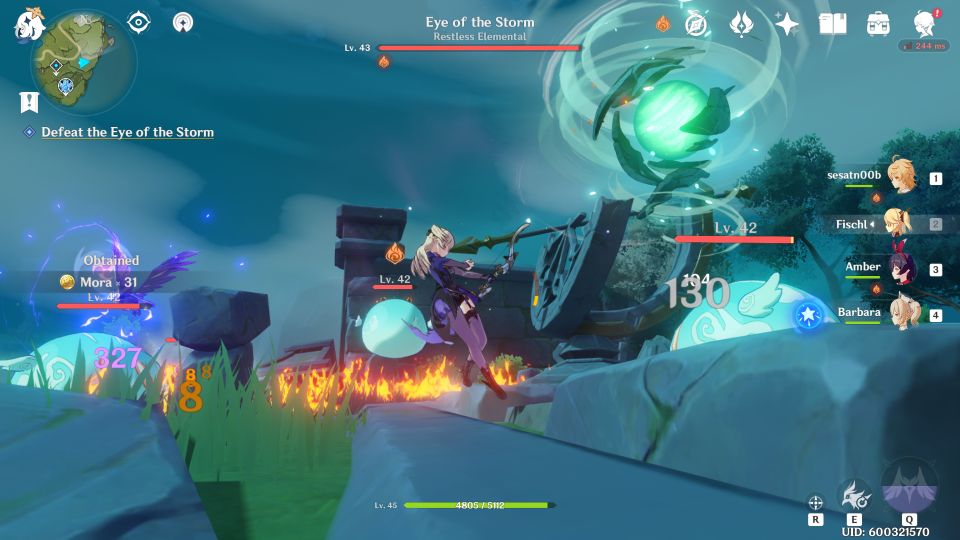 After the battle, talk to Henry to complete the quest. 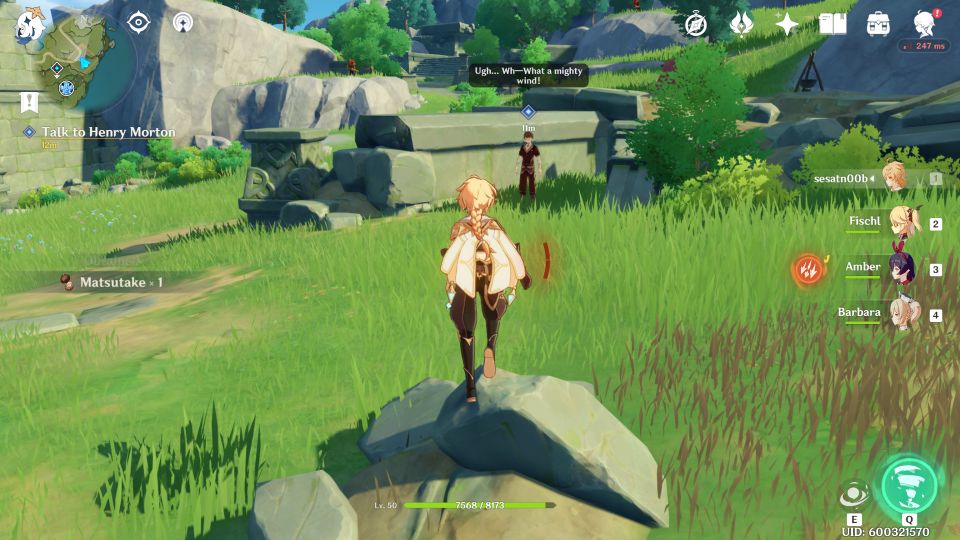