Your task is to find the treasure related to the Guili Assembly, by way of deciphering the texts and finding the ruins.

Here’s a walkthrough and guide of Treasure Lost, Treasure Found in Genshin Impact. 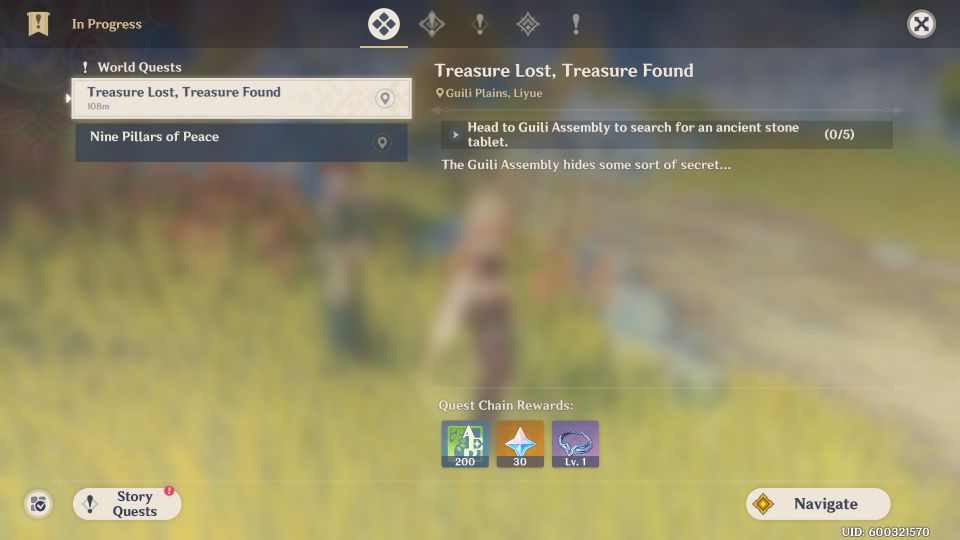 To begin the quest, talk to Soraya who is located in Guili Plains. Her exact location is shown below, marked by the player location in blue. 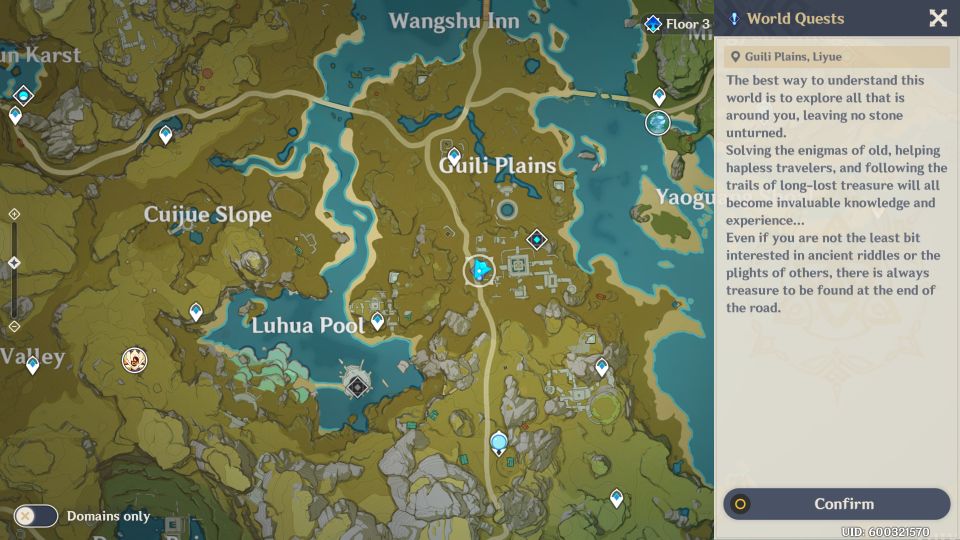 She’ll be at the side of the road. 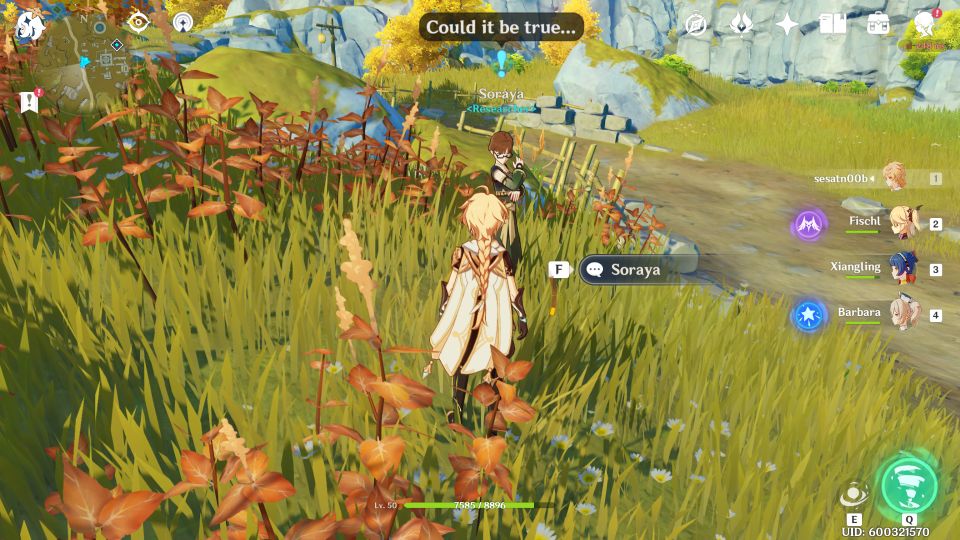 The first objective is to find five ancient stone tablets in the ruins near Soraya.

The quest area will be marked on the map. You should be able to find three stone tablets surrounding the ruins and two more inside the ruins. 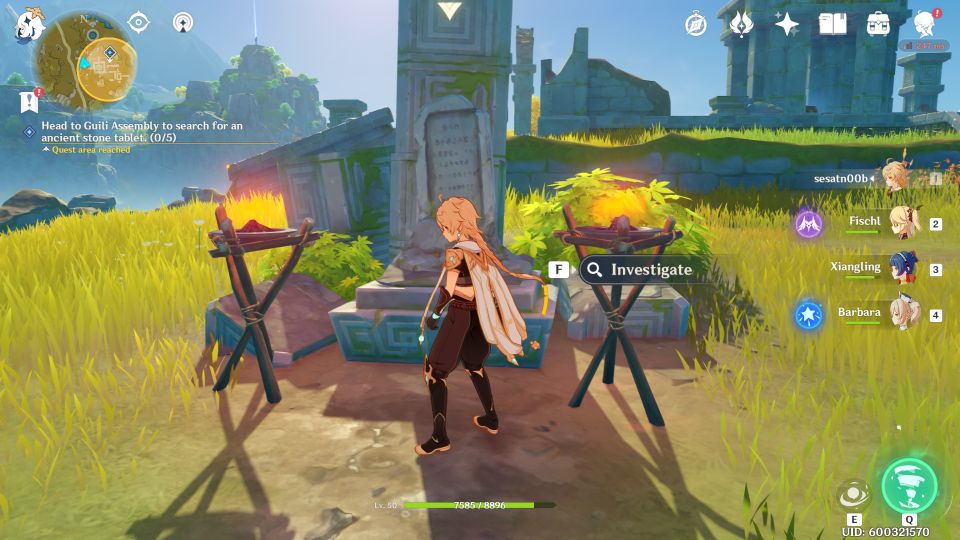 Return to Soraya once you’ve investigated all five stone tablets. 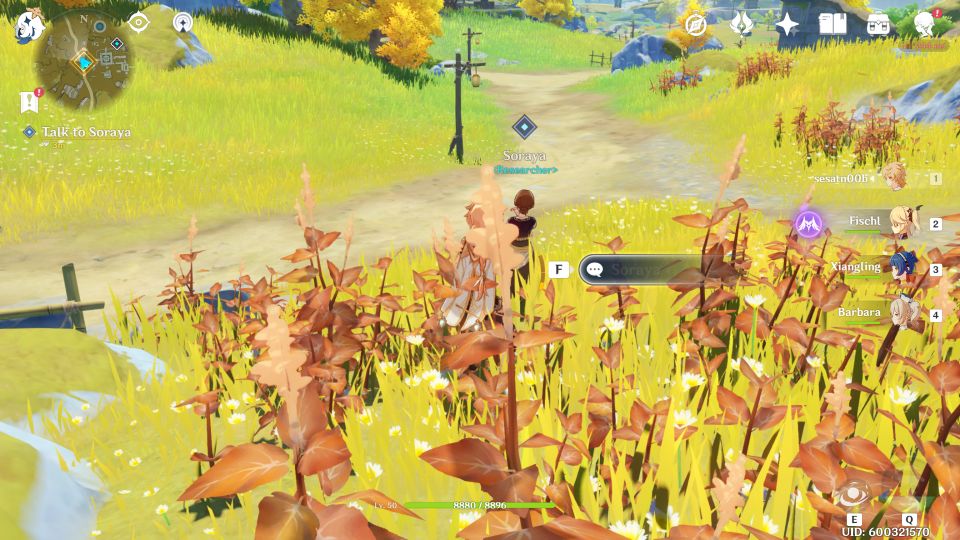 There are two stone tablets located elsewhere. Both of the locations are provided in the map. 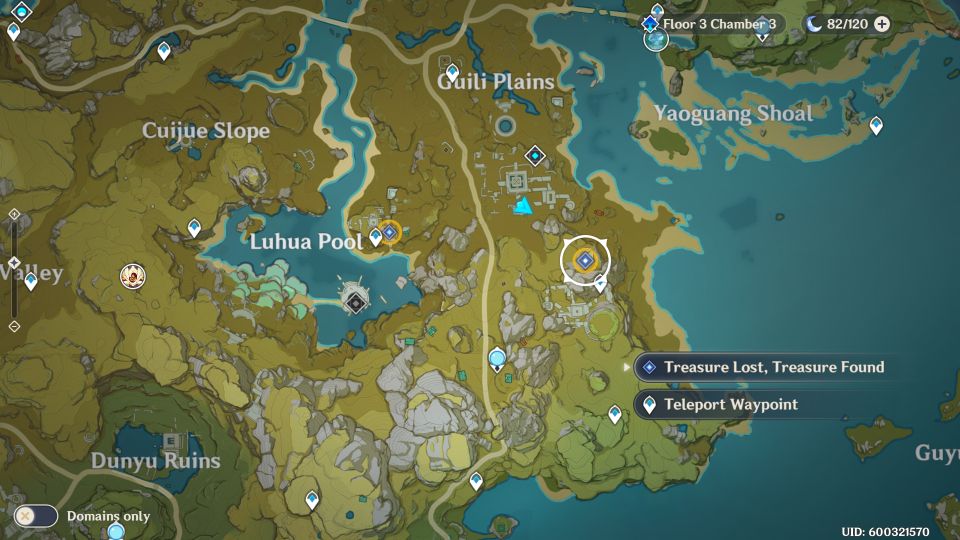 Go to the one on the right first. You should see a ruins here but the entrance is blocked.

Shoot at the explosive barrels to open a path. 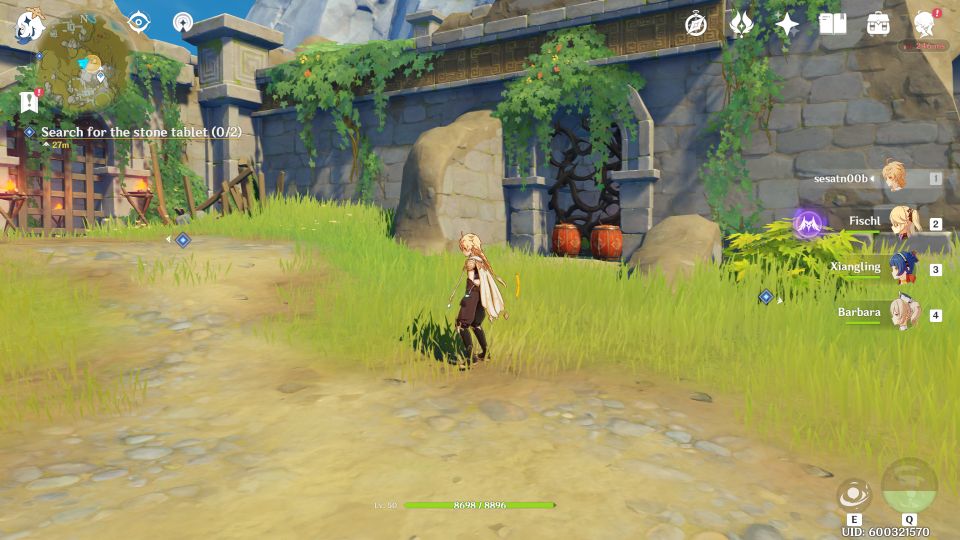 Enter the area and investigate the stone tablet inside. 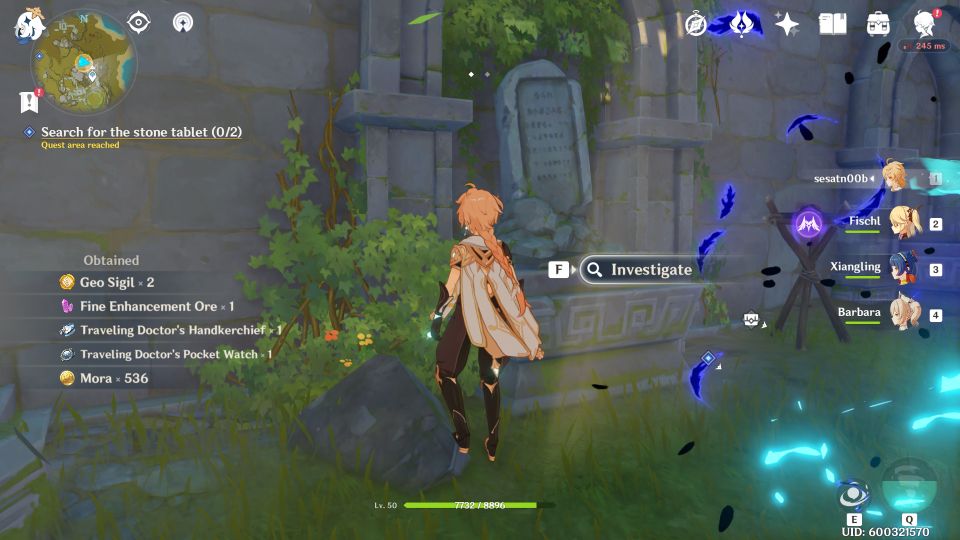 The second tablet is located near Luhua Pool as shown in the map as well. 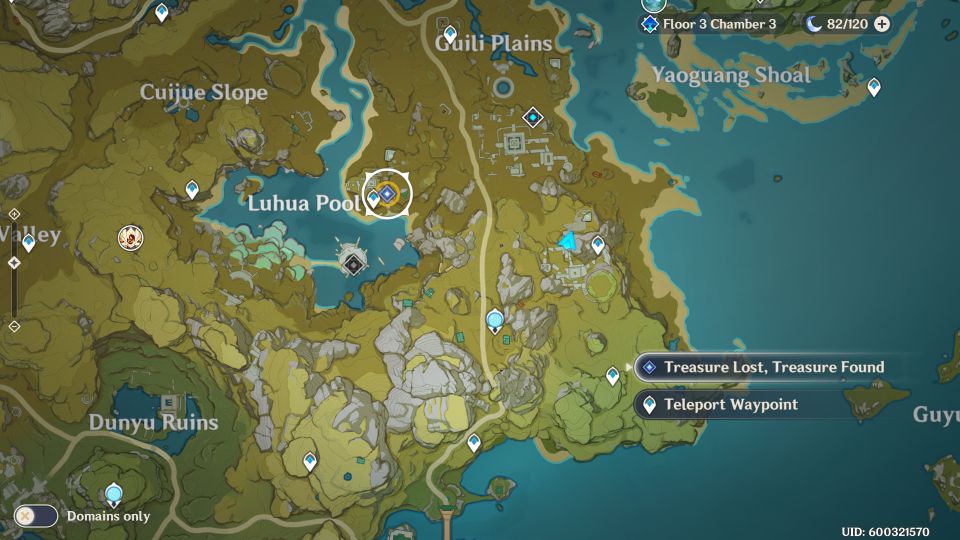 For this one, the stone tablet is protected by some hilichurls and an Abyss Mage.

Take them out and then investigate the tablet. 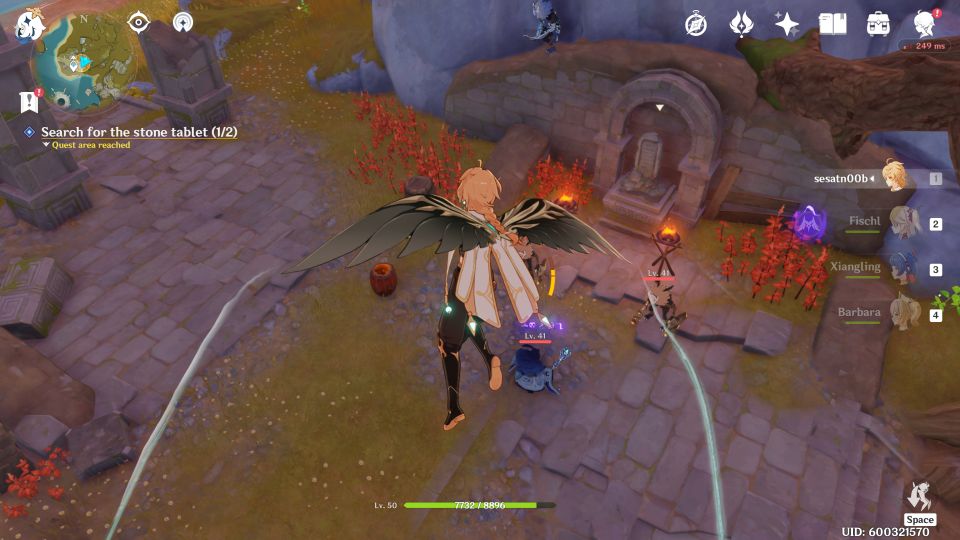 Return to Soraya to report your findings. 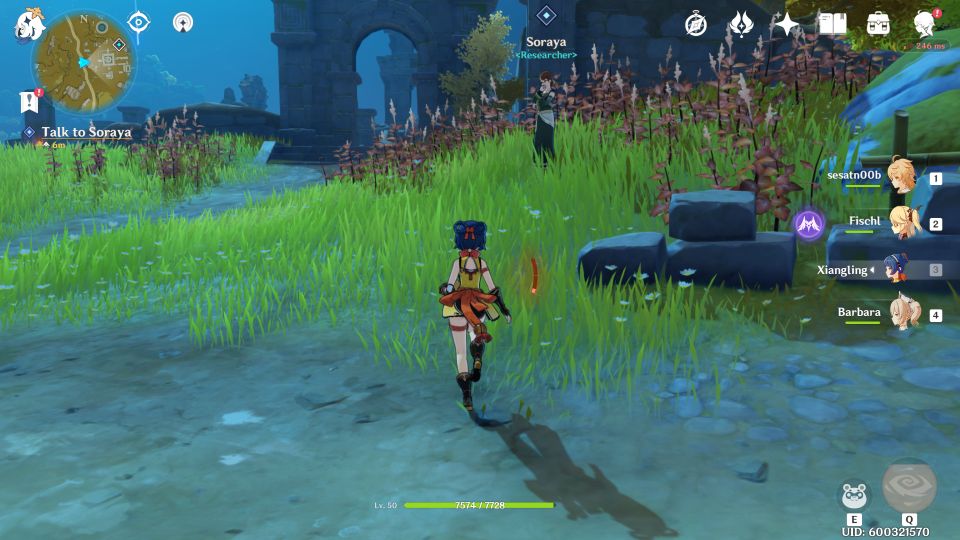 Meet her at Wangshu Inn

Go to Wangshu Inn. Use the waypoint and you’ll reach Soraya immediately. 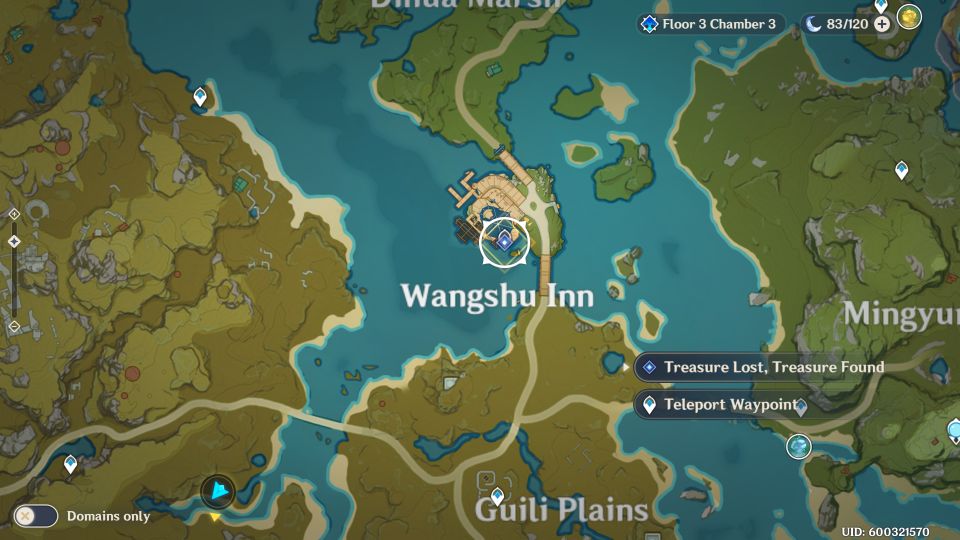 Talk to her again to continue the treasure hunting. 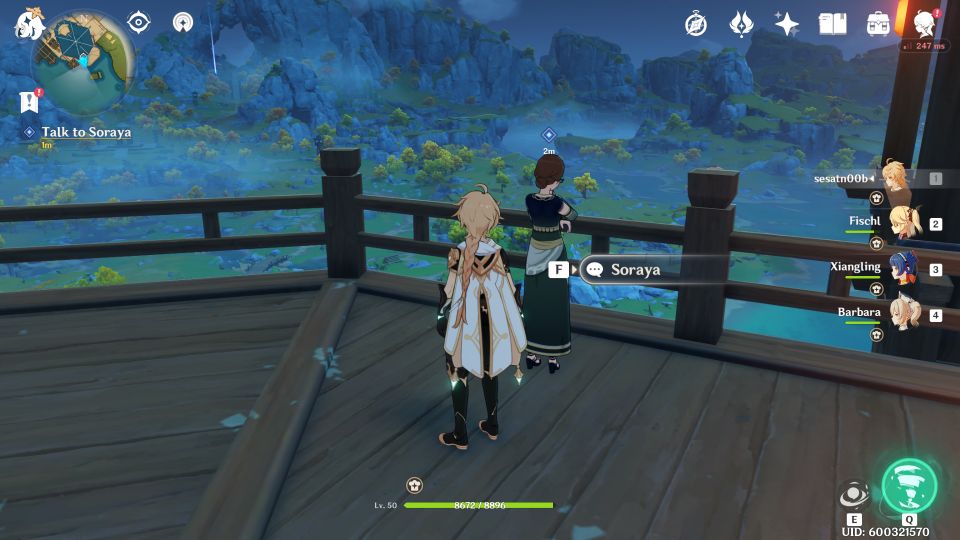 She’ll then ask you to find four of the strange jade plates.

The first one is located just south of Wangshu Inn as shown in the map. 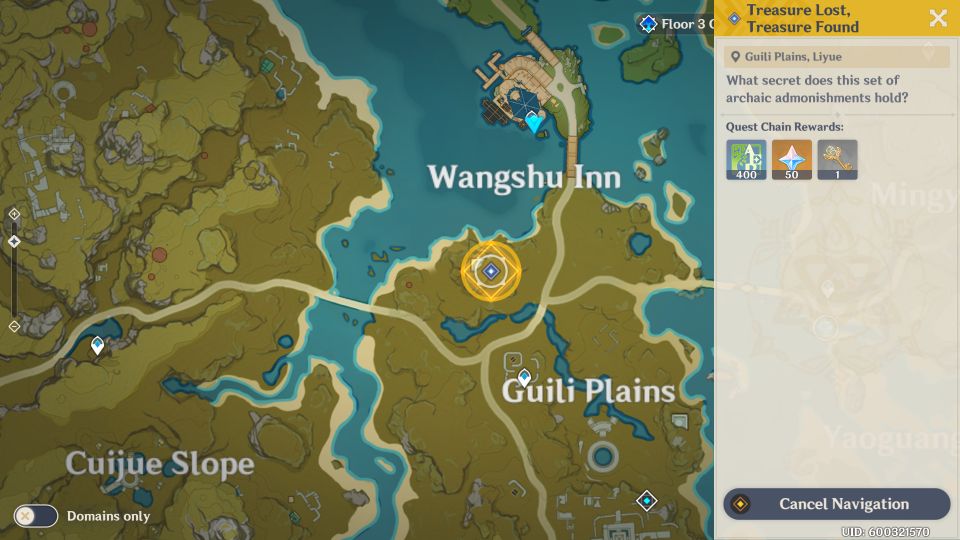 Defeat all of the slimes. 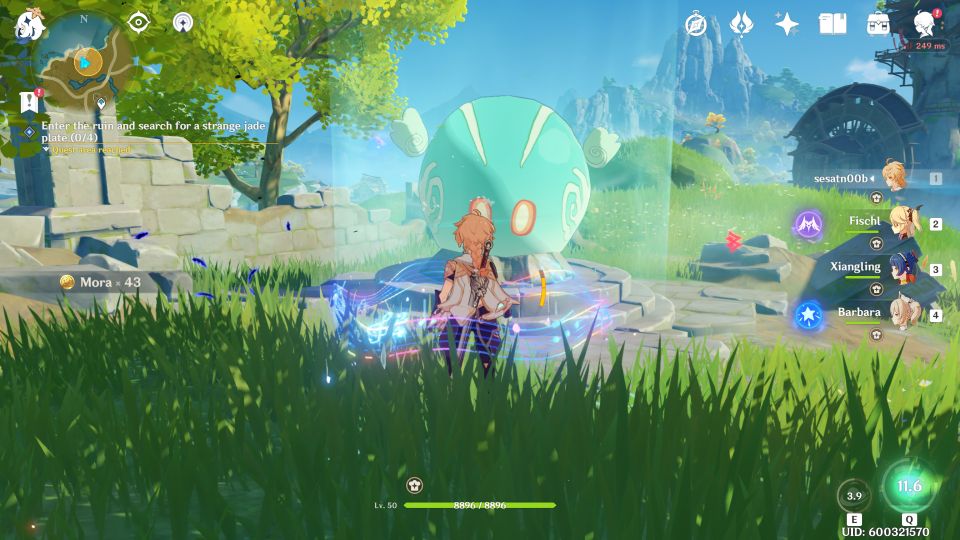 The barrier will disappear after the slimes are gone. Investigate the jade plate. 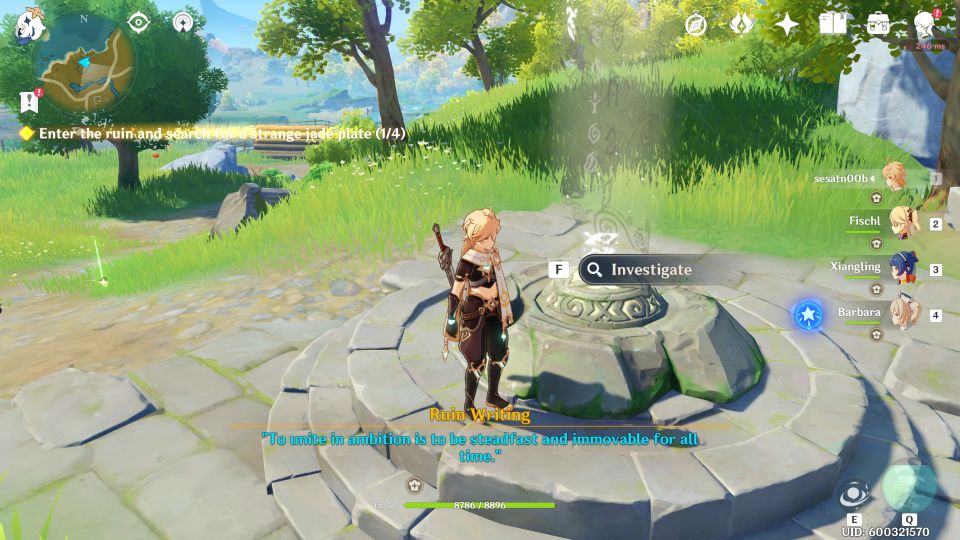 The three other jade plates are shown in the map below, within the red circles marked below.

If you look at the map properly, all of those locations have the same appearance (symbol) on the map as the first one. 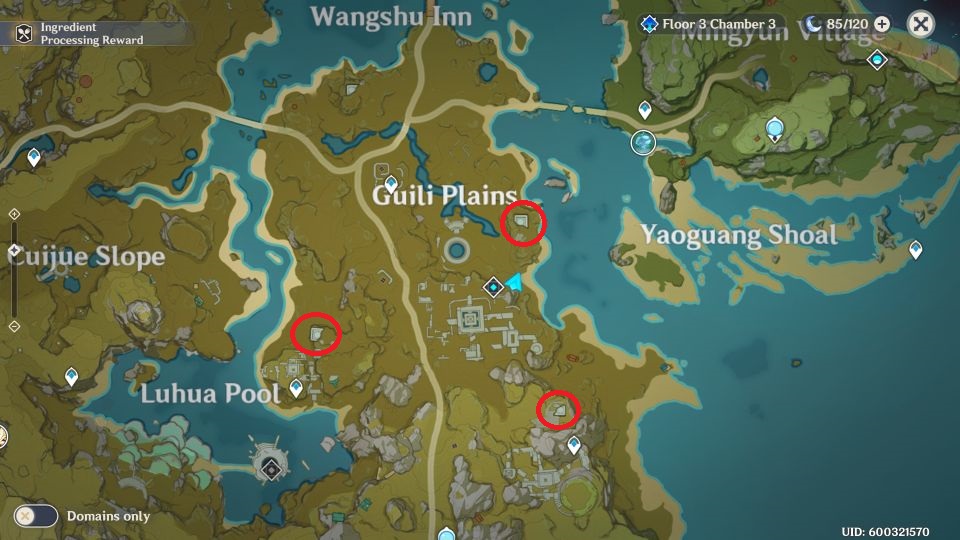 In all of the jade plate areas, you will encounter some enemies including Treasure Hoarders and Abyss Mage. 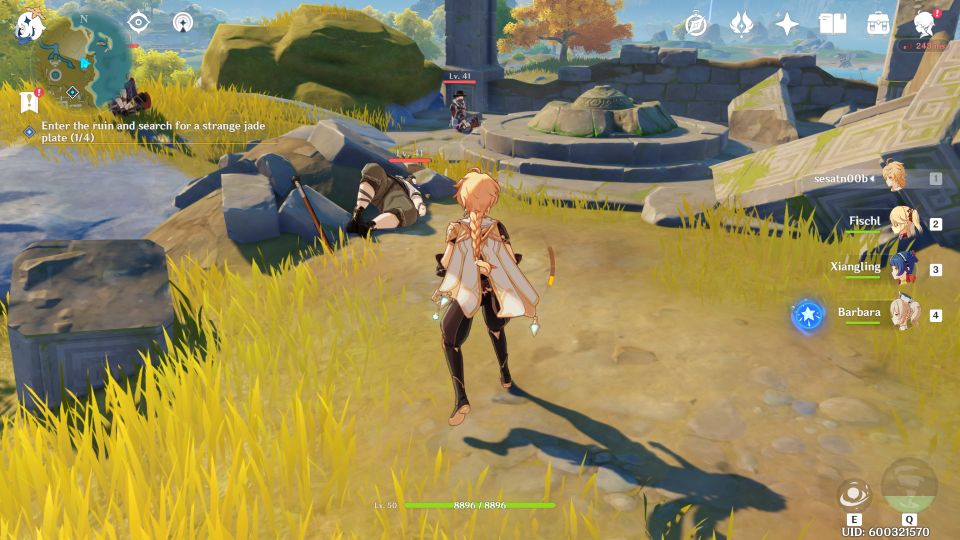 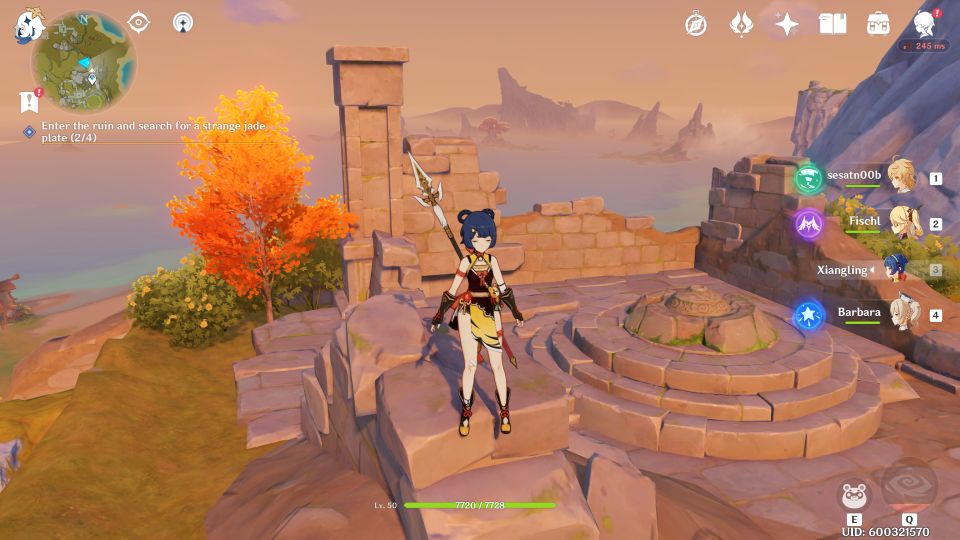 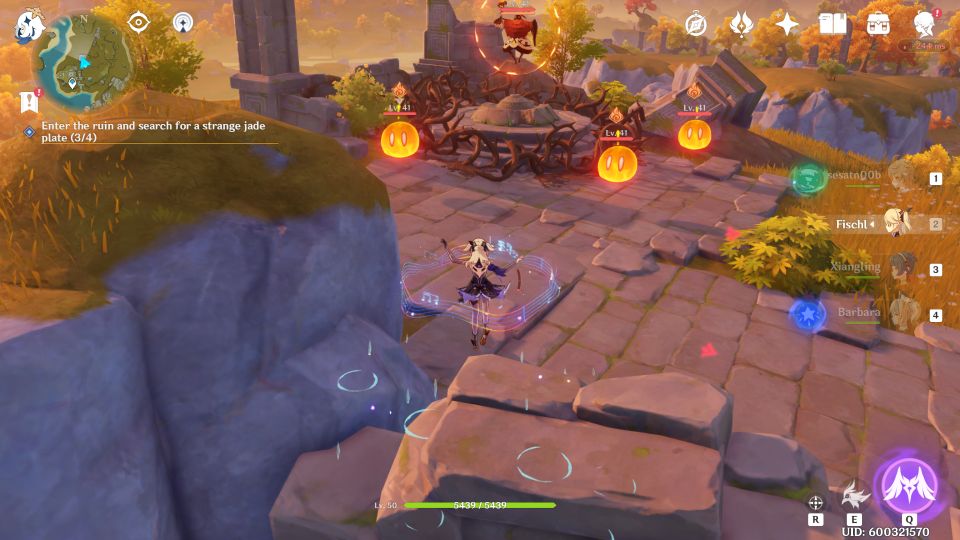 After investigating all four jade plates, talk to Soraya at Wangshu Inn. 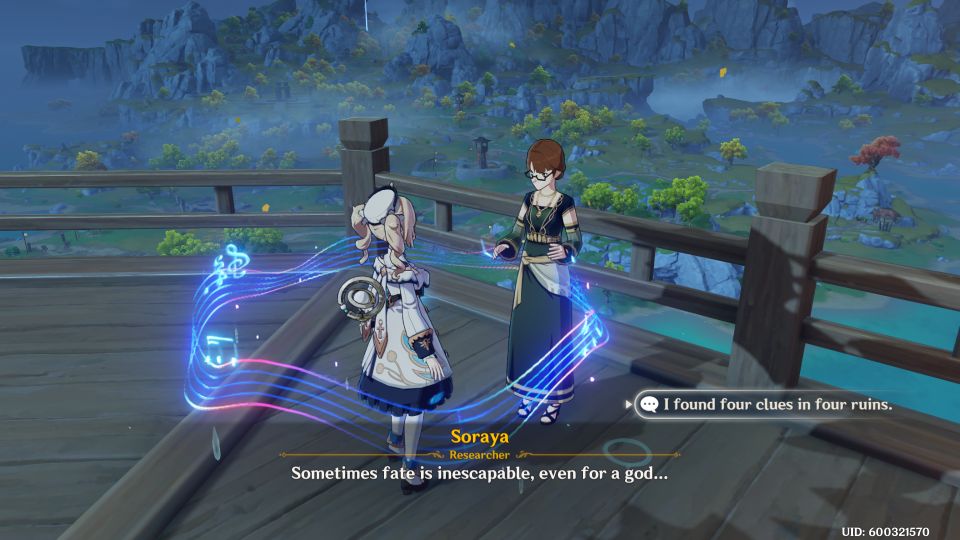 Look for the final ruins

The final ruins is located at Guili Plains. The exact location is shown in the map below, marked by the player location.

It’s basically the blue circle in the Guili Plains map, just under the ‘Guili Plains’ wording. 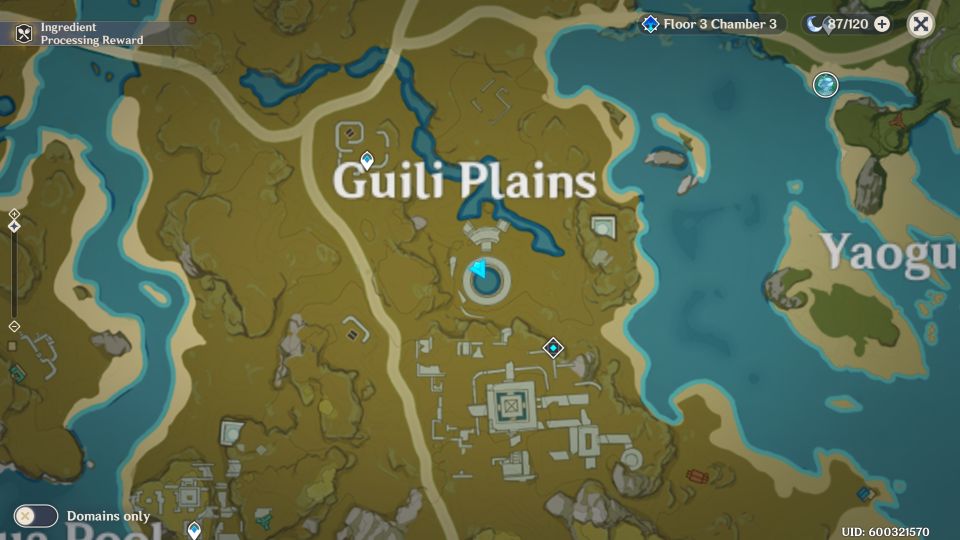 Activate and defeat the Ruin Guards

As you reach, you will see a pool of water with treasure chests in the bottom, surrounded by dormant Ruin Guards.

To lower the water level, you need to activate the jade plate facing the pool.

Three Ruin Guards will be activated and you need to defeat them all. 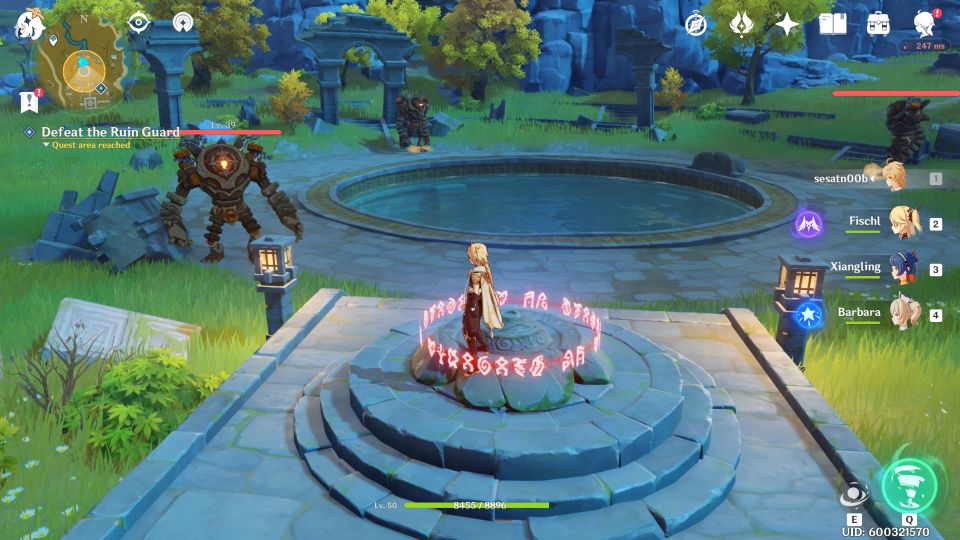 After the battle, go to the jade plate again and press start. 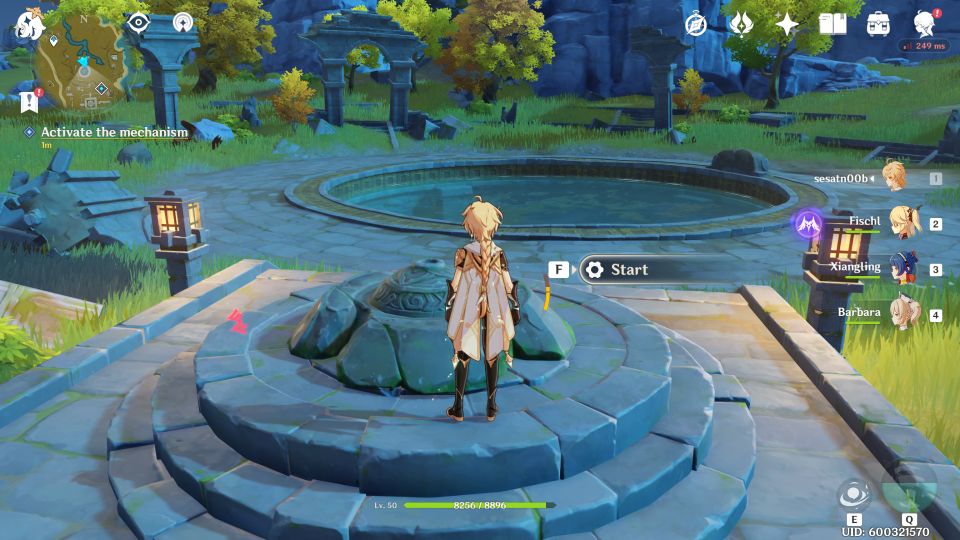 The water level will drop.

Finally, collect the treasure. There are 2 Precious Chests and 1 Luxurious Chest. 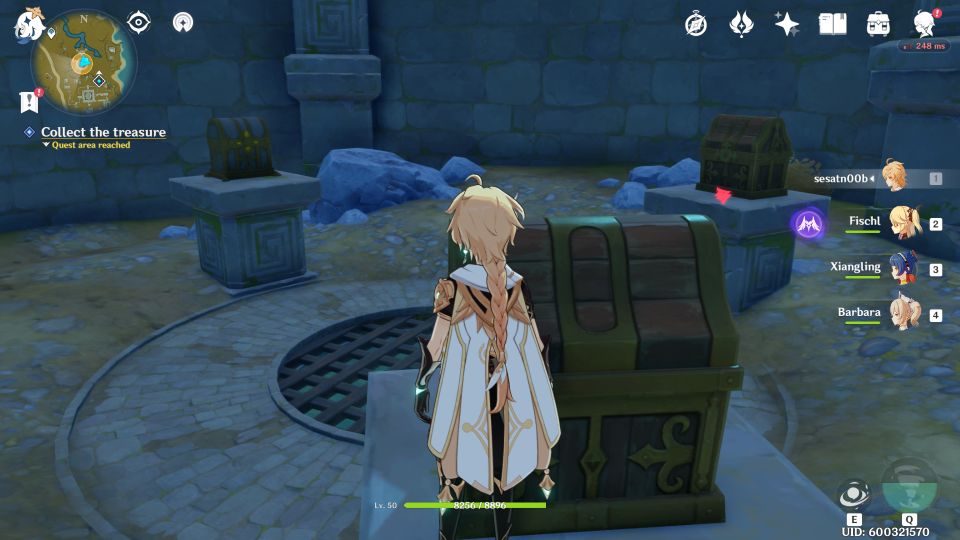 Return to Soraya to complete the quest. 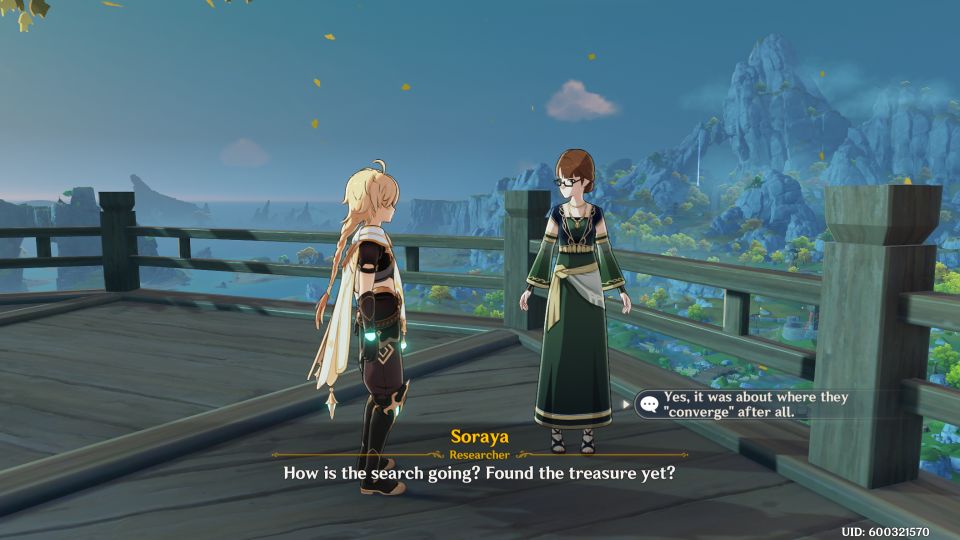