Lost Riches is a new event in Genshin Impact and it’s basically a repeat of the seelie event.

This event requires you to find coins and then trade those coins for your own Mini Seelie plus some useful items.

Here’s a guide on the Lost Riches event and the Secret Treasure Clue location in Genshin Impact. 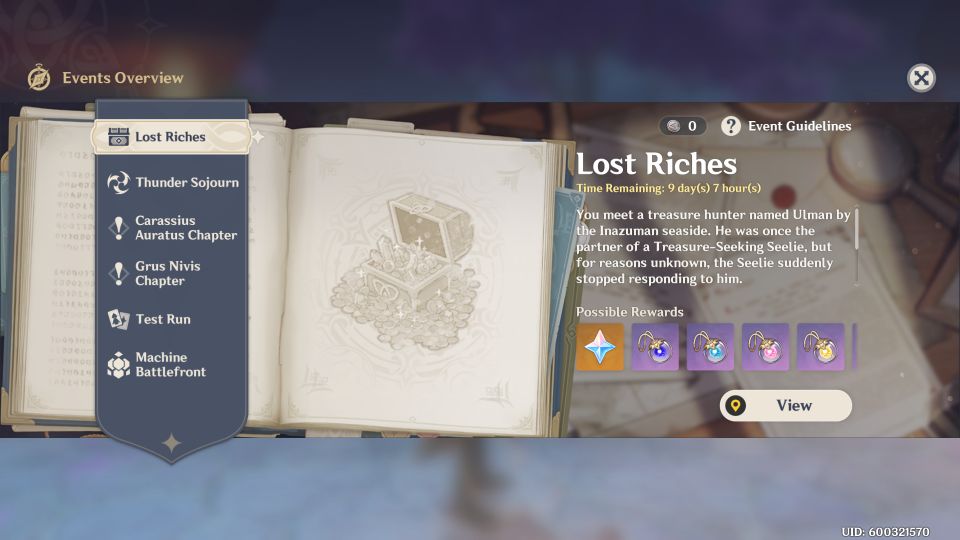 To begin the event, you have to meet Ulman who is at Araumi, Inazuma. 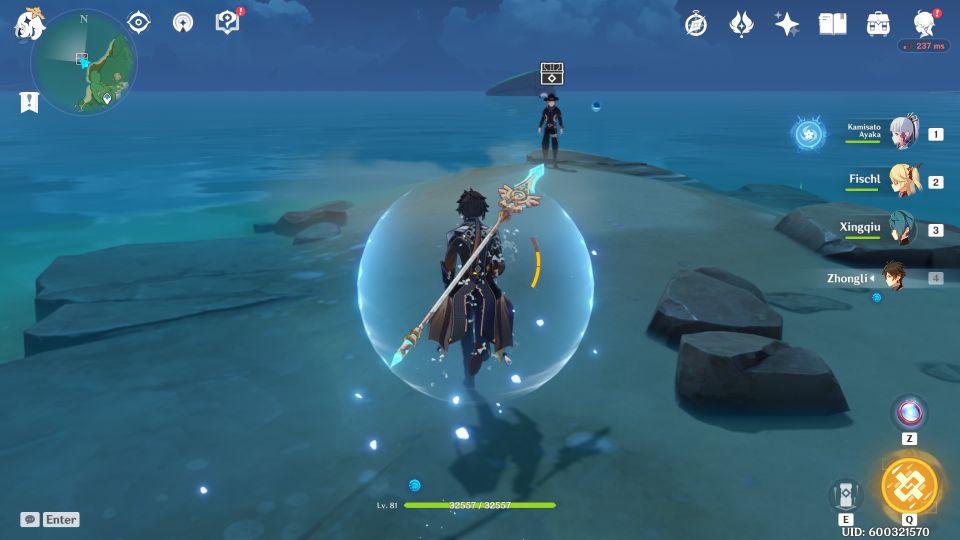 Talk to him and he’ll give you Treasure Area clues. You’ll get two locations every day, up until the seventh day.

It’s quite easy to follow. The first day will be Chinju Forest and Nazumi Beach. 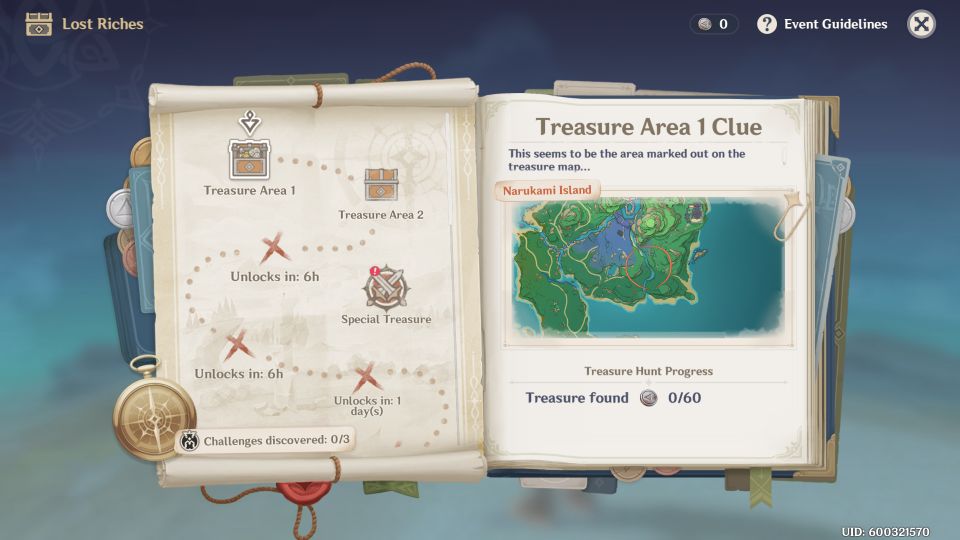 You basically need to go to the area shown on the map Ulman gave.

Then, use the seelie gadget you just received. Walk around the marked area and the seelie will point you towards the coins. You will also hear a ringing sound when you’re close to the spot.

Just dig at the spot and you’ll gain some iron coins.

Enemies may also spawn at times after you dig. Repeat the process until you’ve found all the iron coins in the area. 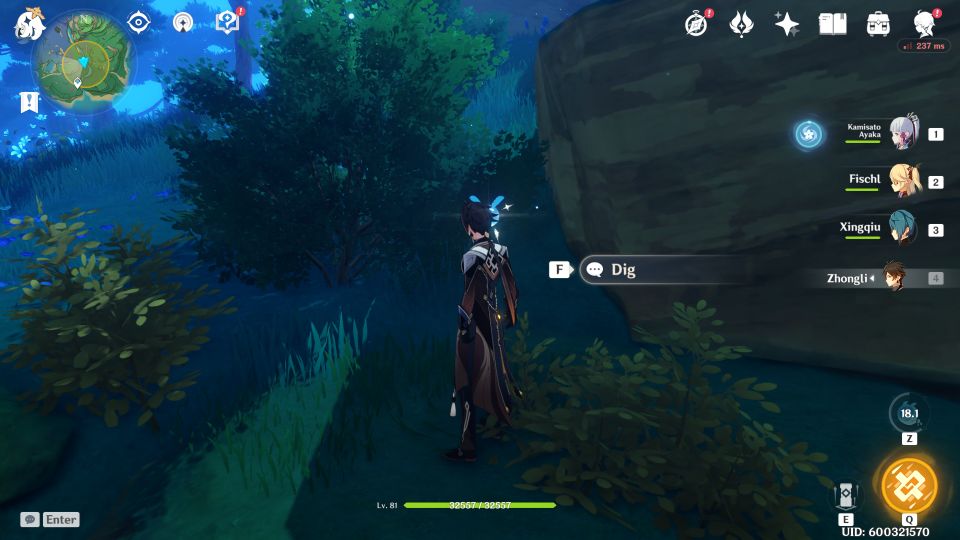 Then, you can go to Ulman and use those coins to exchange for items. You may want to save for the Mini Seelie gadgets as they’re limited edition. 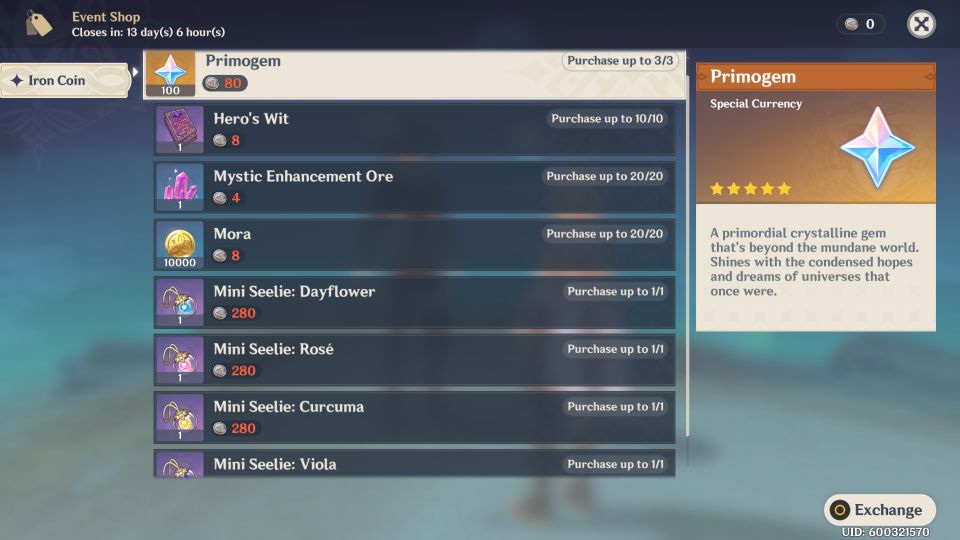 Secret Treasure Clue locations and how to solve the puzzle

The first Secret Treasure Clue is in Araumi. You will find it at the marked area below.

It’s basically near the thunder barrier where you find a ruin guard inside the barrier. 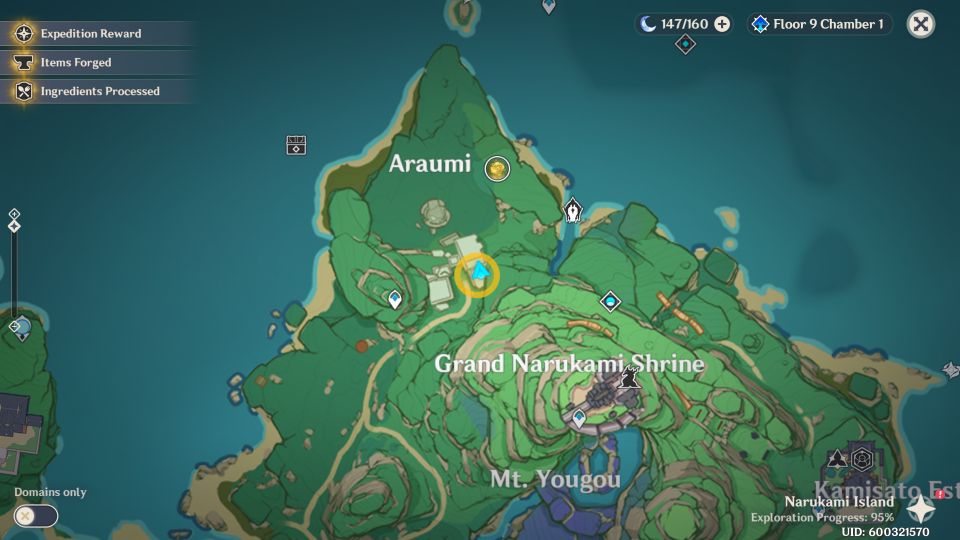 Use your seelie and it will point you to the spot. Dig it. 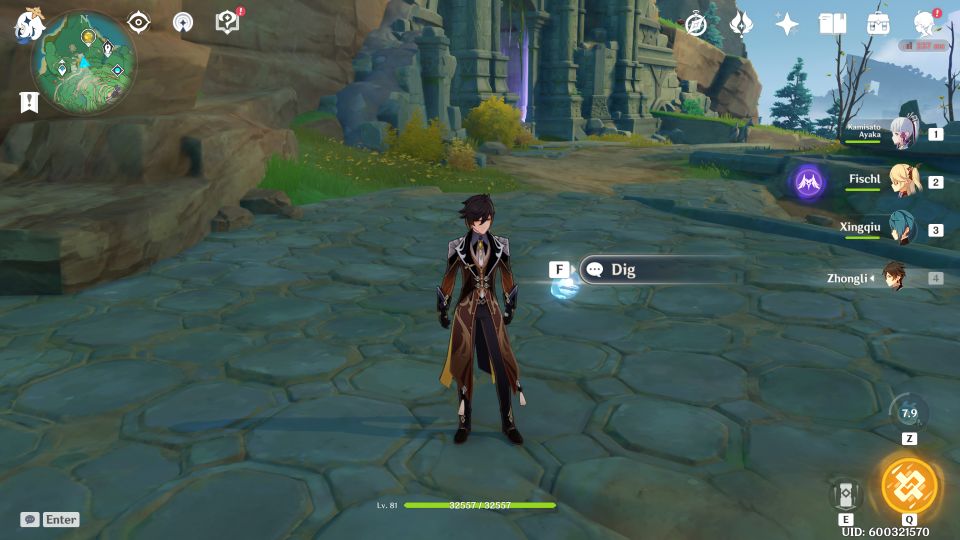 You will then see a tile. Step on it and you’ll see nine of these tiles.

To solve the puzzle, you have to follow the pattern of the puzzle hint given under the Special Treasure Clue. The puzzle seems to be randomized for each player so you just need to understand how it works.

For e.g. you can see the puzzle hint I received below. To solve it, you just have to light up the tiles shown in the hint.

You can step on wrong ones first, and then walk back to remove the lit tiles. However, you can’t jump while doing the puzzle or it resets. Just walk over the wrong tiles first. 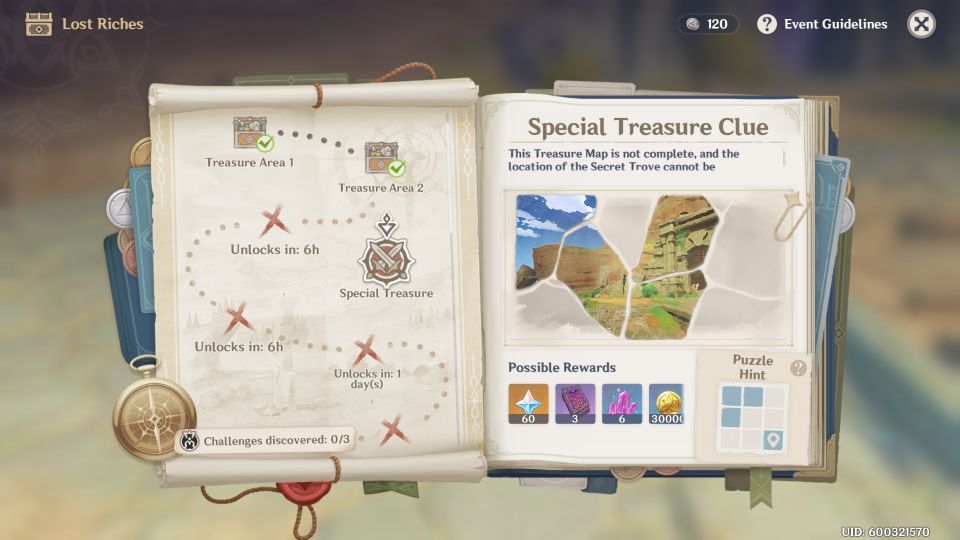 Once you’ve formed the same pattern as the puzzle hint, the challenge is completed. You’ll get Primogems and Ascension books. 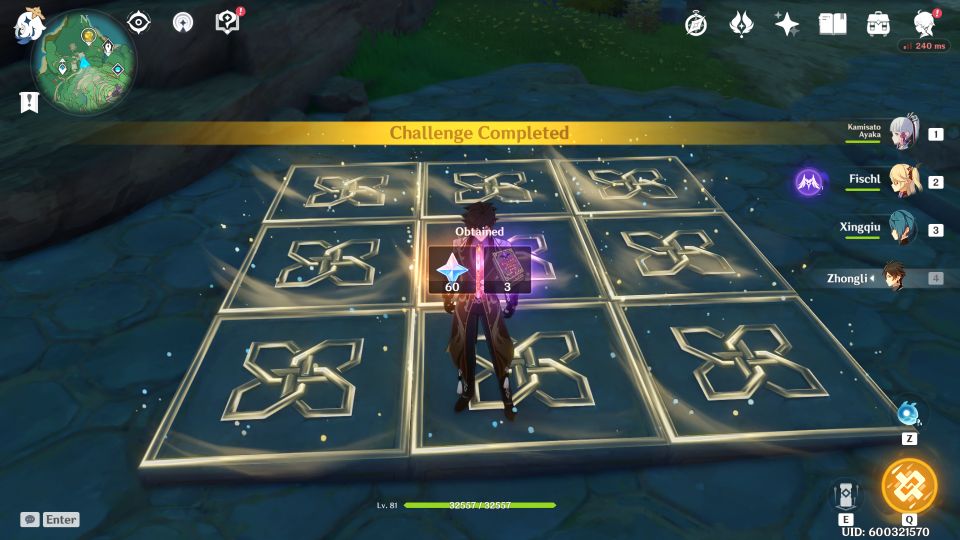 The second Secret Treasure is located at Fort Mumei. You can see the exact location in the map below, marked by the player location. 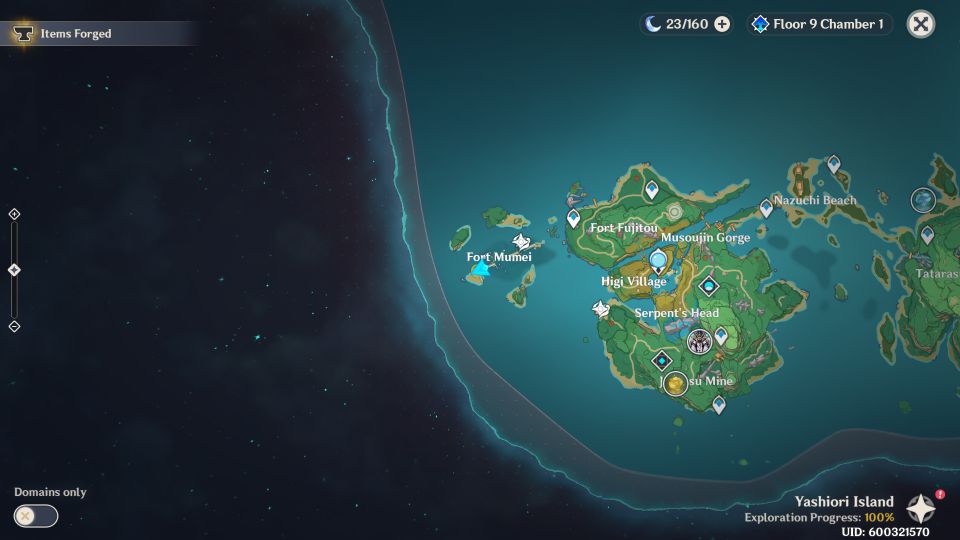 Like before, each player may get a different puzzle hint so you may want to see your own. 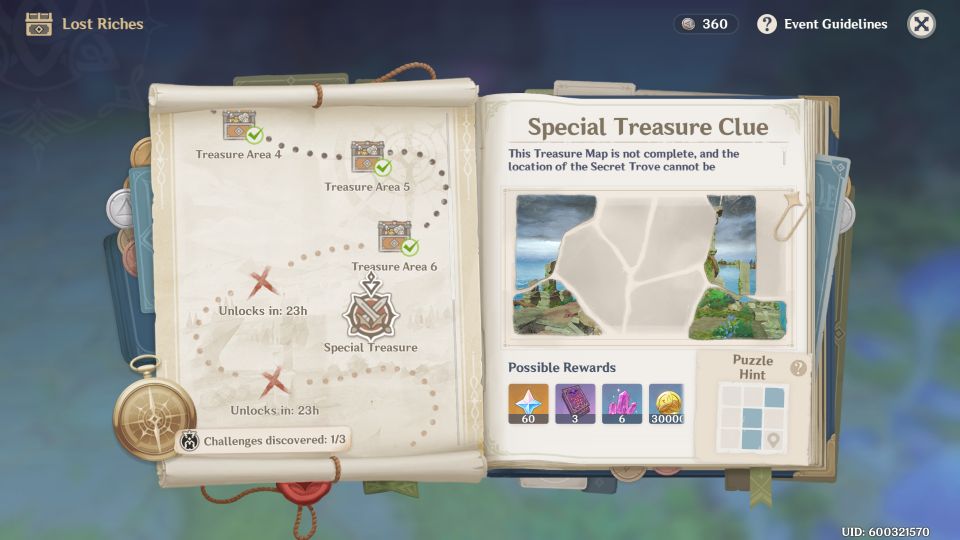 When you’re at the spot, use your seelie and dig. You’ll then get the first tile.

Follow the puzzle hint and light up only the tiles that are relevant. You can always backtrack to undo the wrong tiles. 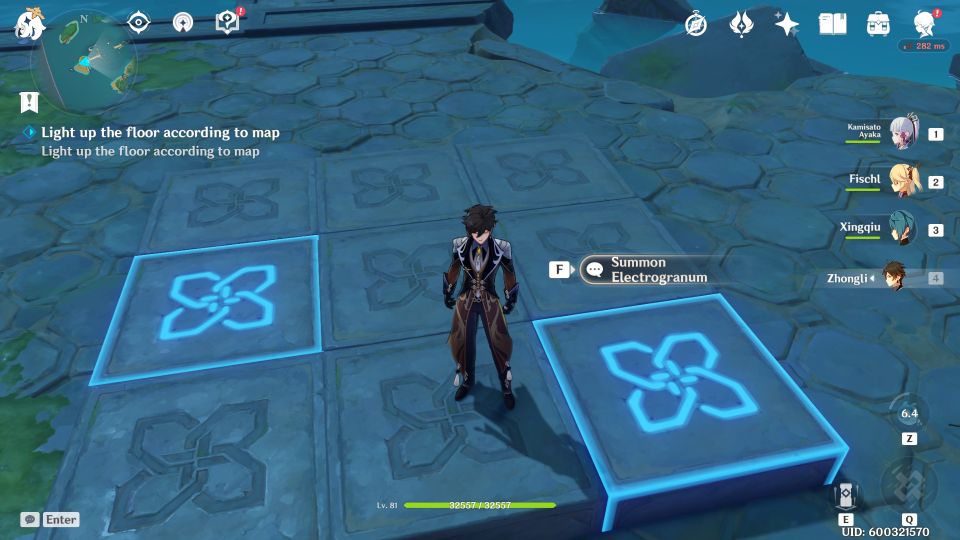