Ayaka is the latest 5 star character in Genshin Impact and is the first one after Inazuma is released. She is a cryo-based character and is usually placed as a main DPS in a team.

Her banner will only be for a limited time and will be replaced by Yoimiya soon.

In the meantime, here are some of the best Ayaka builds, weapons, artifacts and more in Genshin Impact. 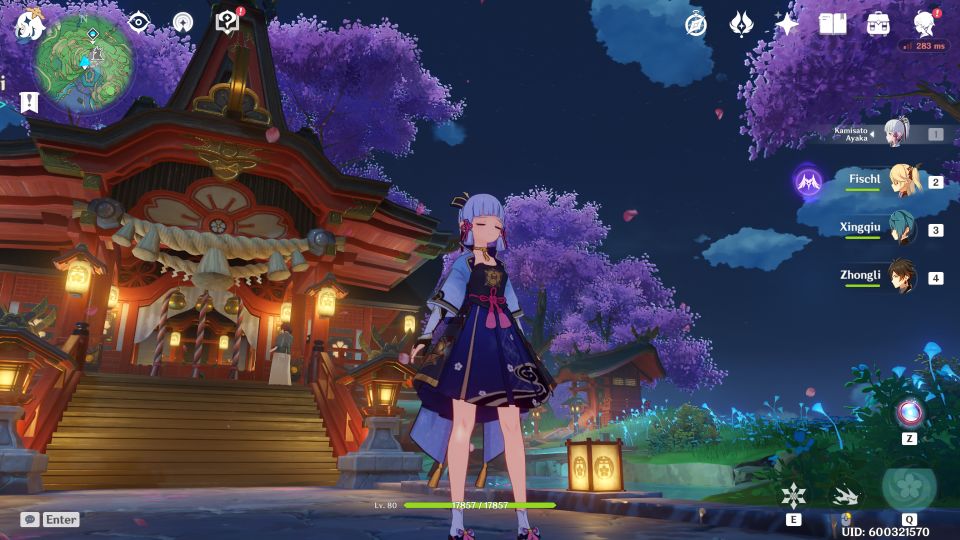 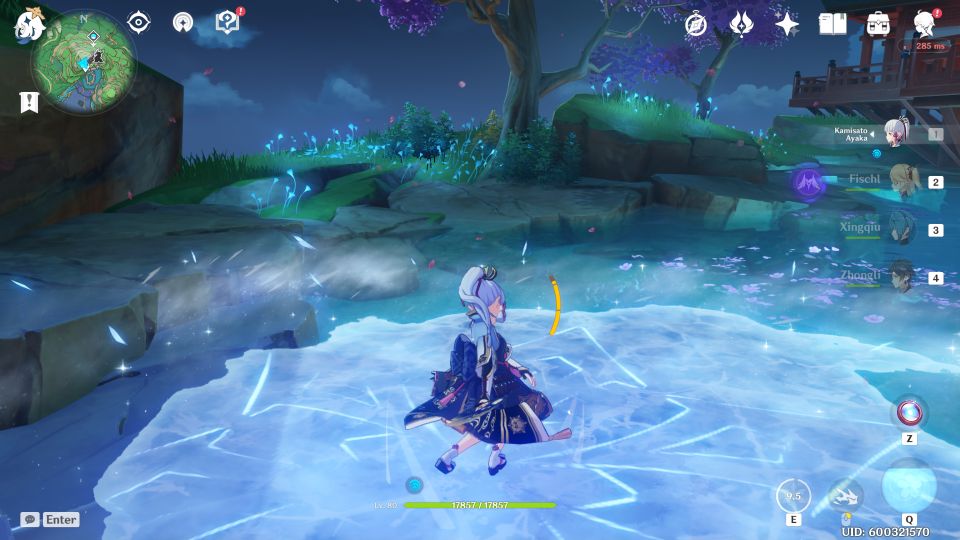 Based on Ayaka’s talents and skills, she’s clearly meant as a DPS, either main or sub DPS.

Among her talents, her elemental burst is the one that deals massive DMG, capable of taking down bosses in a single burst with a good weapon and artifacts.

If you’re running her with a Crit Rate weapon and a four-piece Blizzard Strayer set, you don’t need much Crit Rate in your artifacts. You should prioritize Crit DMG if that is the situation.

Also, you might want to run her in a permafreeze team comp, with a good Hydro applier like Sucrose, and possibly another Cryo character. This allows her to utilize the 40% Crit Rate bonus from the Blizzard Strayer set almost all the time. 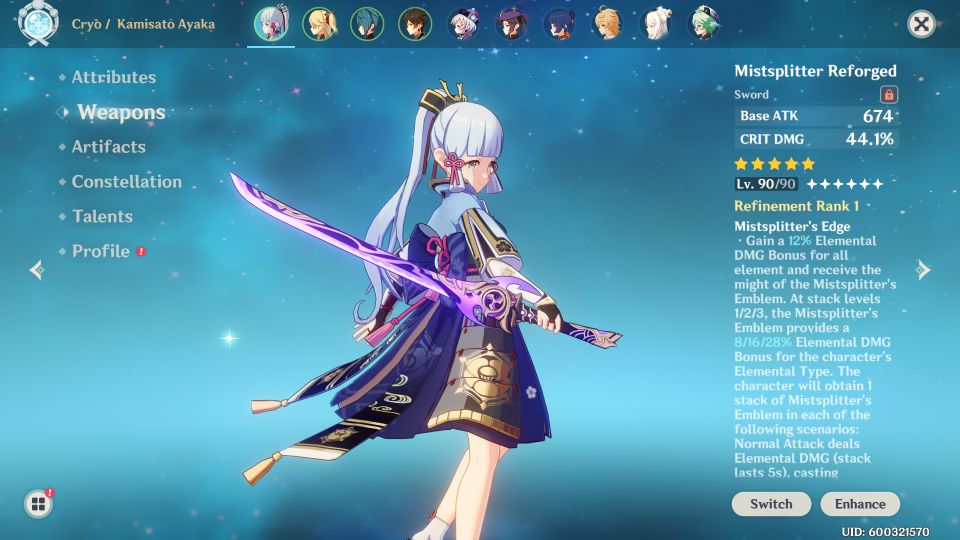 The optimal choice for pay-to-win players would be Mistsplitter Reforged. It comes with a base attack of 48 and Crit DMG sub-stat.

Refinement level 1: HP increased by 20%. Additionally, provides an ATK Bonus based on 1.2% of the wielder’s Max HP.

2. The Black Sword – 4 star weapon with 44 base attack and Crit DMG sub-stat.

Refinement level 1: After defeating an opponent, ATK is increased by 12% for 30s. This effect has a maximum of 3 stacks, and the duration of each stack is independent of the others.

4. Amenoma Kageuchi. A 4-star weapon with 41 base attack and ATK sub-stat.

For the sub-stats, the priority should be similar with other main DPS characters.

Circlet: Crit Rate / Crit DMG depending on which you need more.

For general sub-stats on the artifacts, usually aim for Crit Rate / Crit DMG when possible. 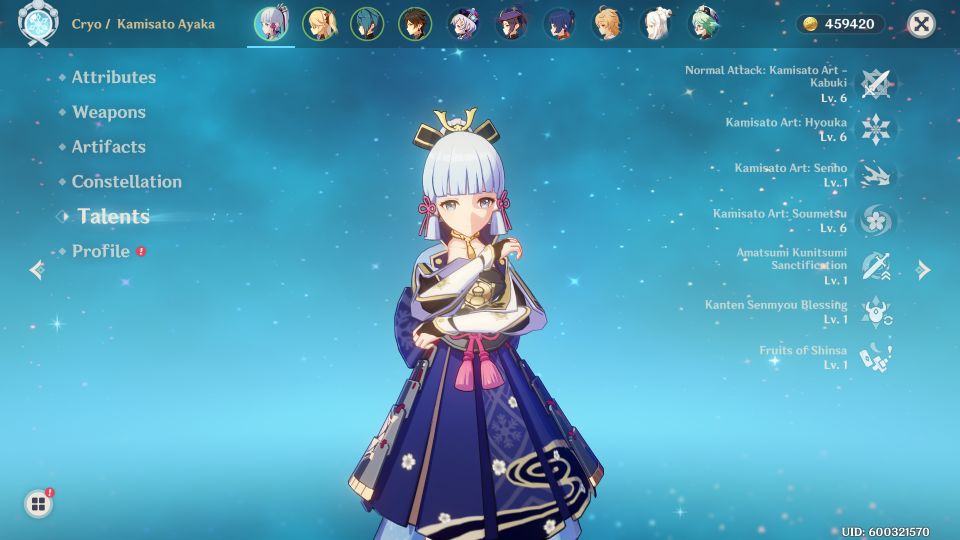 Charged Attack – consumes a certain amount of stamina to unleash a flurry sword of ki.

Plunging Attack – plunges from mid-air to strike the ground below, damaging enemies along the path and dealing AoE DMG upon impact.

Ayaka consumes stamina and cloaks herself in a frozen fog that moves with her. In Senho form, she moves swiftly upon water. When she reappears, she unleashes frigid energy to apply Cryo on nearby opponents and infuses her attacks with Cryo for a brief period.

Summons forth a snowstorm with flawless poise, unleashing a Frostflake Seki no To that moves forward continuously. Hits 20 times max.

When Ayaka crafts weapon ascension materials, she has a 10% chance to receive double the product.

When the Cryo application at the end of Kamisato Art: Senho hits an opponent, she gains the following: 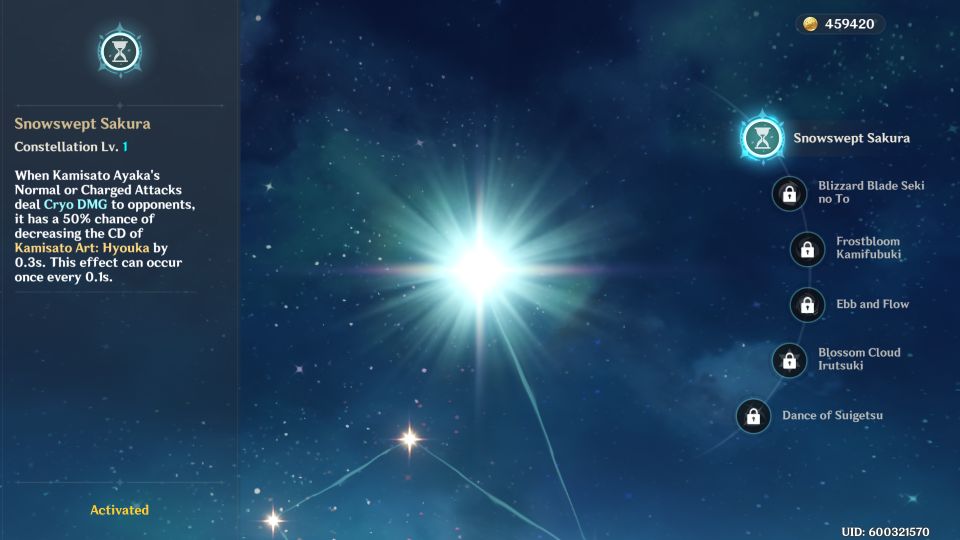 Is Ayaka good enough at C0?

Ayaka at C0 is more than enough to deal good damage as a DPS character. Furthermore, her constellations in general do not make her broken.

Although she’s a pretty strong Cryo DPS, do note that Ganyu is still regarded by most players to be the top DPS. If you do not have a good DPS at the moment, you may want to consider pulling for Ayaka.

To be fair, getting her at C0 is enough if you’re not a whale. C1 does not seem that worth it and C2 adds a little to your burst damage with the two additional frostflakes. The best constellation might be C4 as it reduces enemy’s defense by 30% for 6s. That said, only whales will go for C4 and above.