Where There’s Smoke is one of the challenges you’ll face in Escape Academy and it takes place in The Library.

Your objective is to escape the library as the fire breaks out inside.

Here’s a walkthrough and guide of Where There’s Smoke (Library) in Escape Academy. 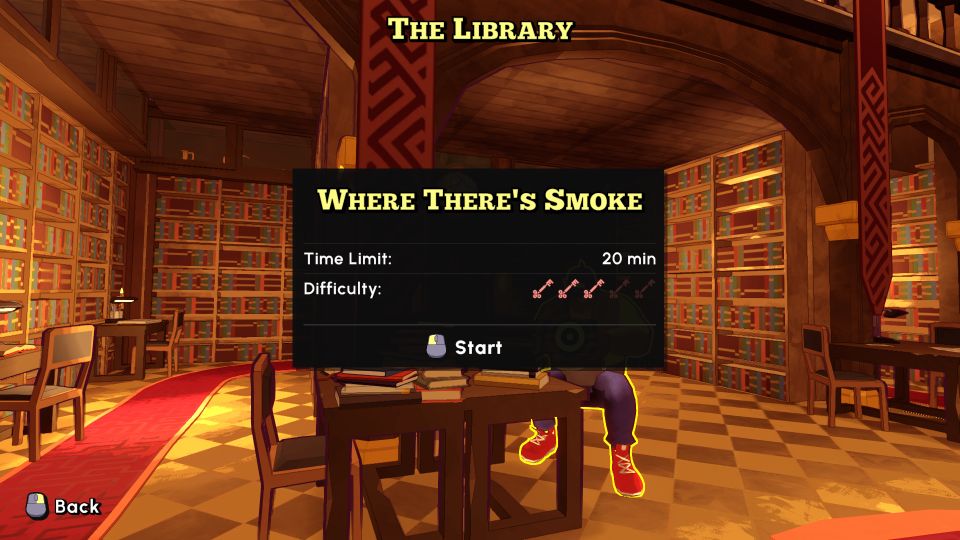 The first clue is right where you start, where you see a book which asks you to flip through.

Go to the word puzzle and just flip all the letters THROUGH. This will unlock a gate and on this gate, you will see four tiles you need to place.

You need all four to escape the library. 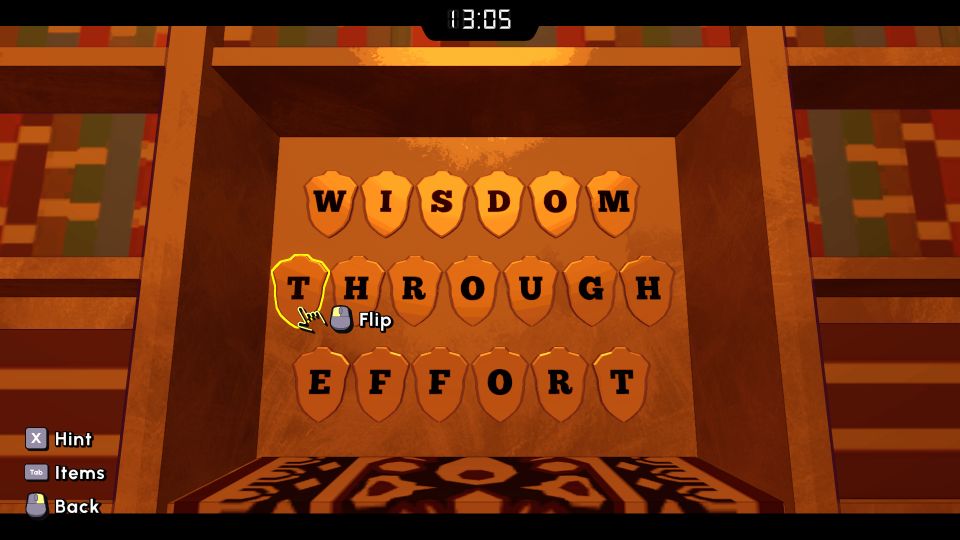 There’s a padlock in a separate room in the library and you’ll see some tiles with arrows.

Just outside that room, you will see four tiles with 1 missing. 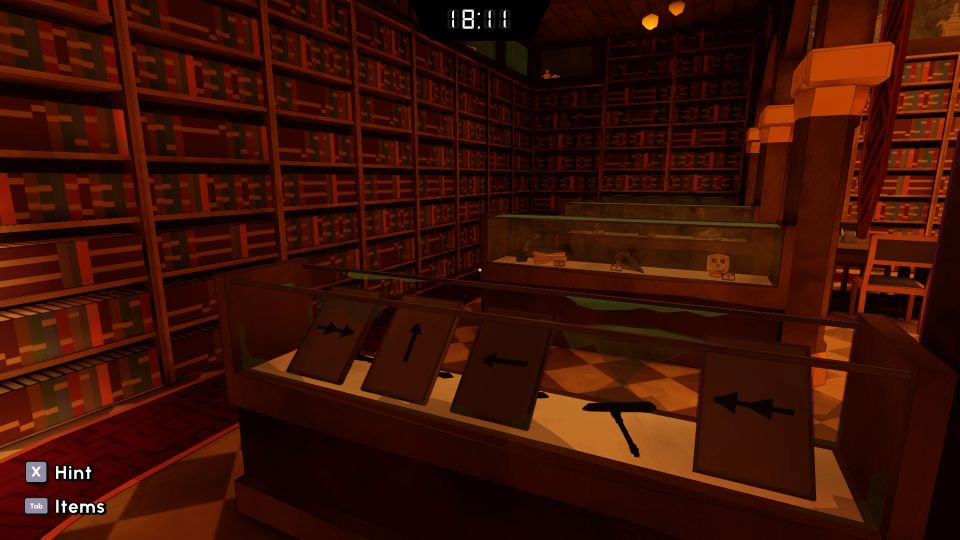 The missing tile is beside the chest with the padlock. 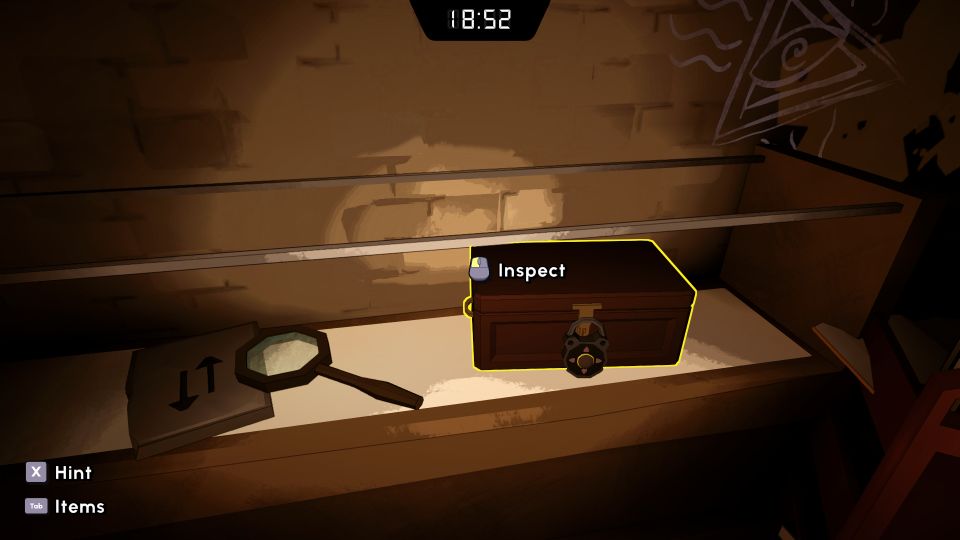 You will get a crank handle inside and an hourglass. 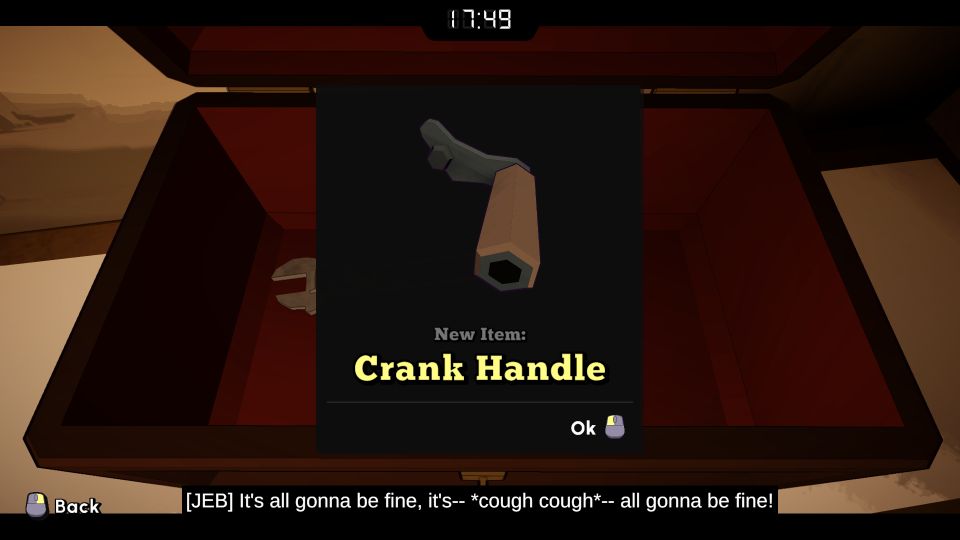 For the next puzzle in the same room, you’ll see three scrolls with names and numbers.

This translates to 257. There’s also a hint which says to think twice. 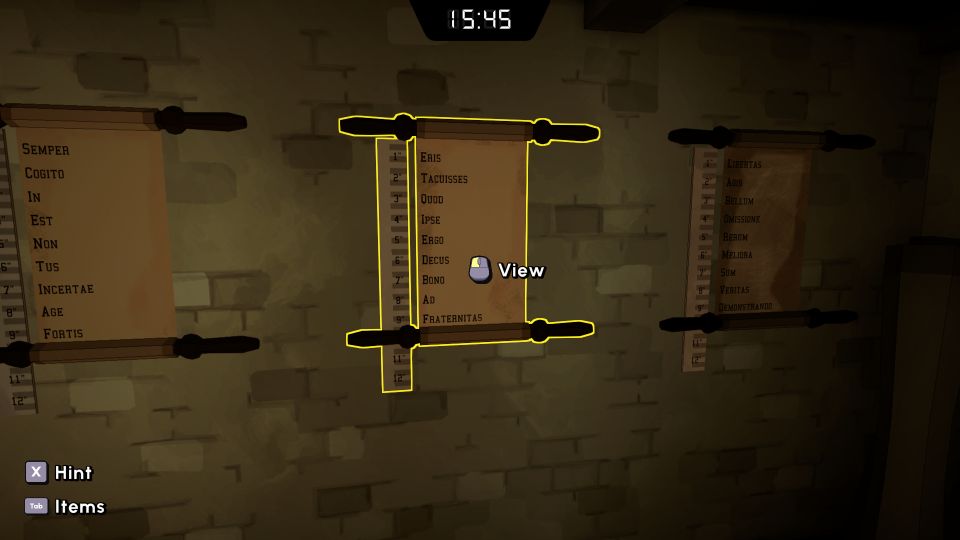 The chest requires four numbers and you have to key in 2257. We key in 2257 instead of 257 because Cogito has to be repeated twice.

You will get a Strange Tile. 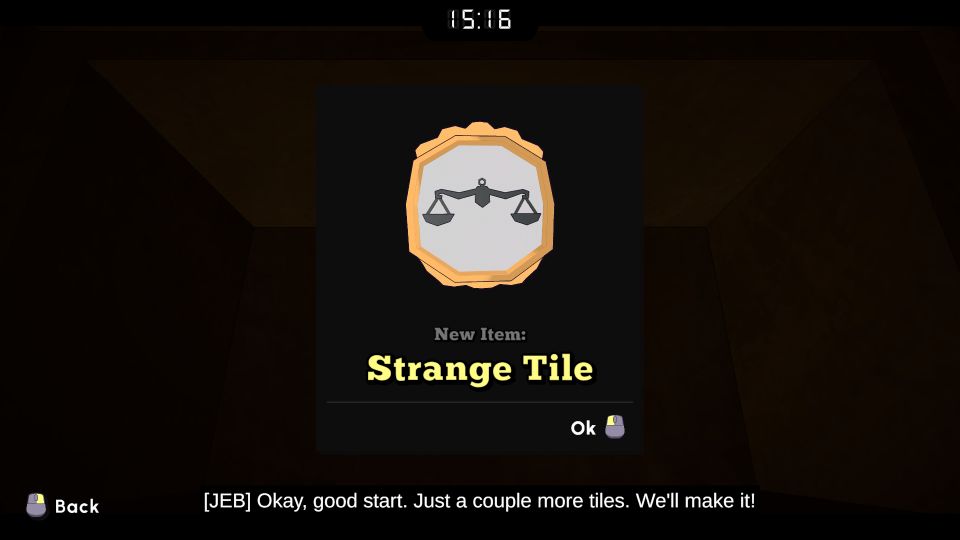 There’s another puzzle where you have to turn the clock hands.

The answer is above the puzzle. There is a clock pointing to II, VI and X which means 2, 6 and 10. 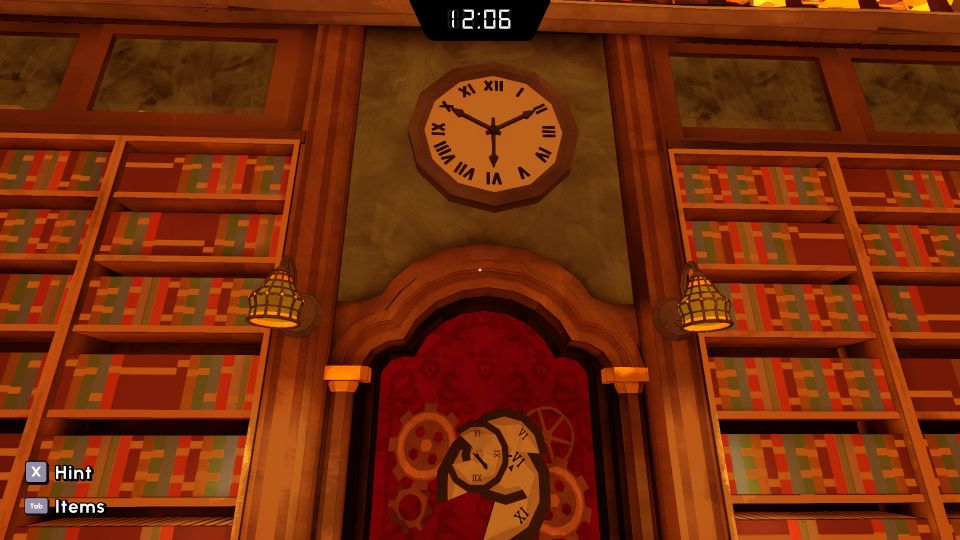 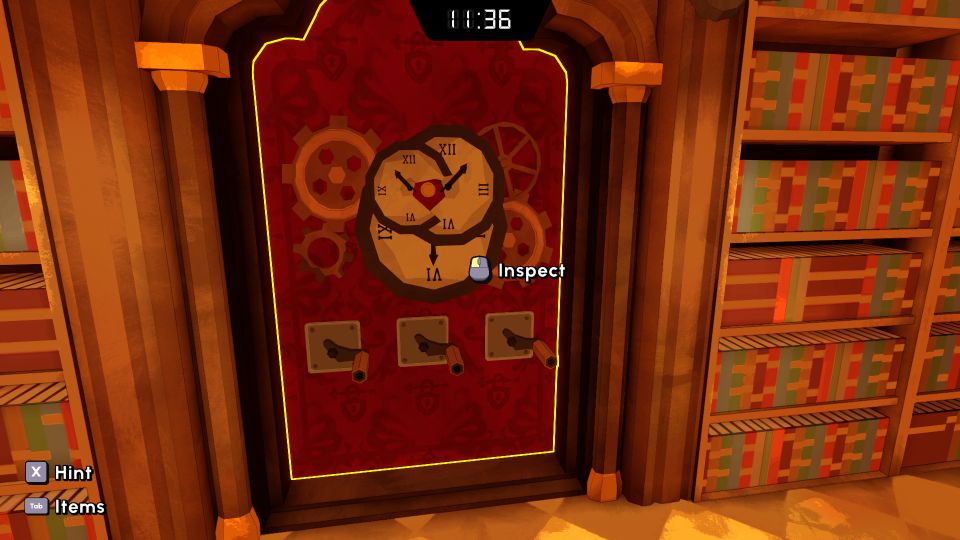 Inside the room, there’s a chest with a padlock that’s flipped. The clues are also flipped. 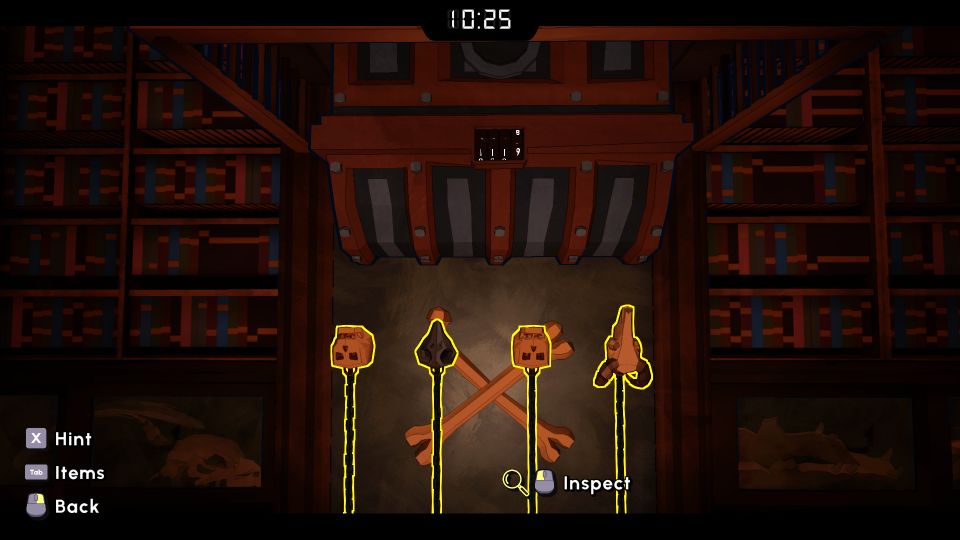 If you look in the library, you’ll see that each head has a value in the glass casing. The skull is 9, the bird-like skull is 8 and the goat-like skull is 6. 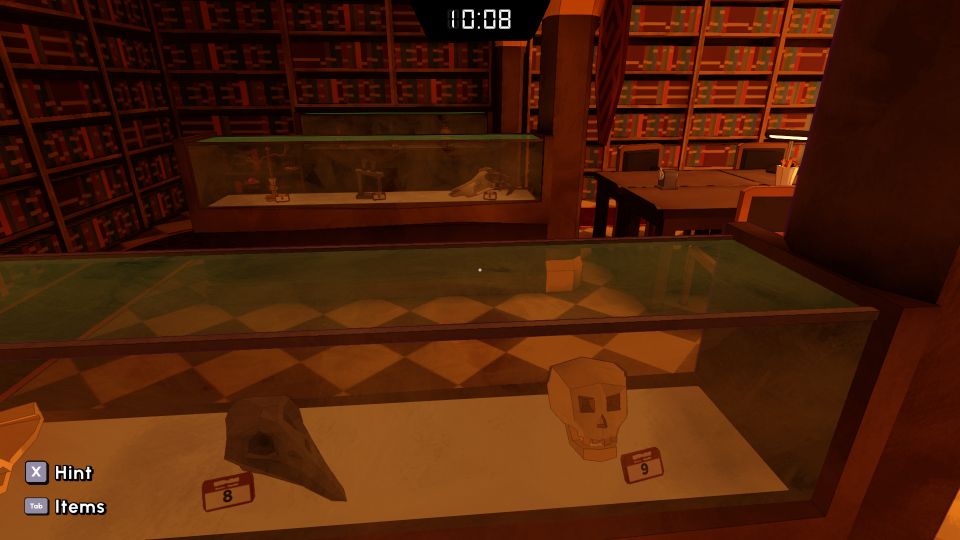 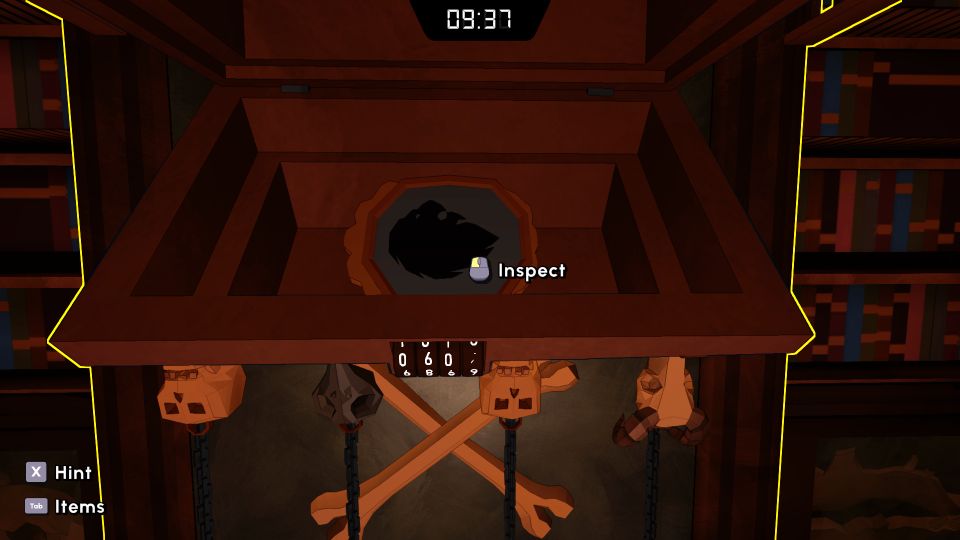 You will then get a Strange Tile that you can use for PRIDE. 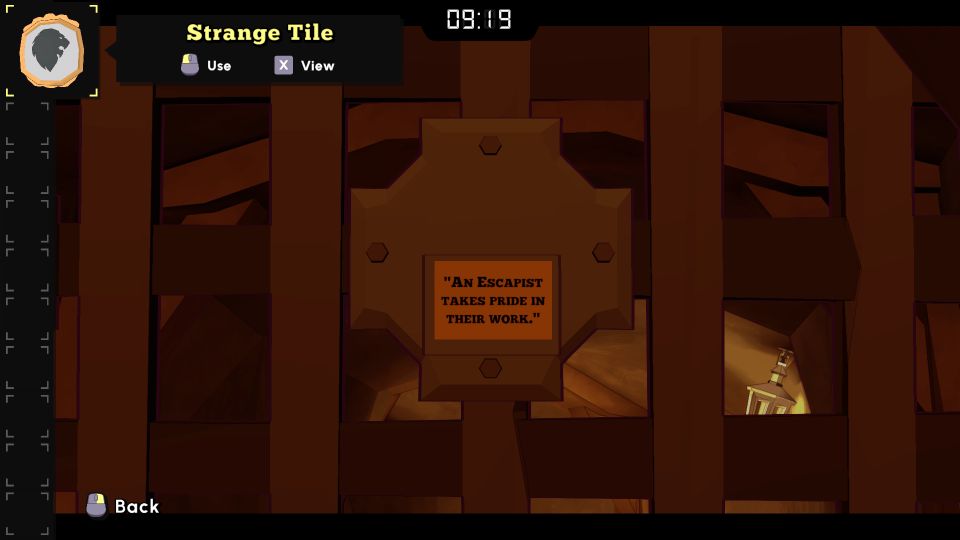 In the same room as the inverted padlock, you will see two ladders. If you look up, you can see a place where the ladders can reach.

You will need to move the ladders according to the lines and eventually reach the upper platform. 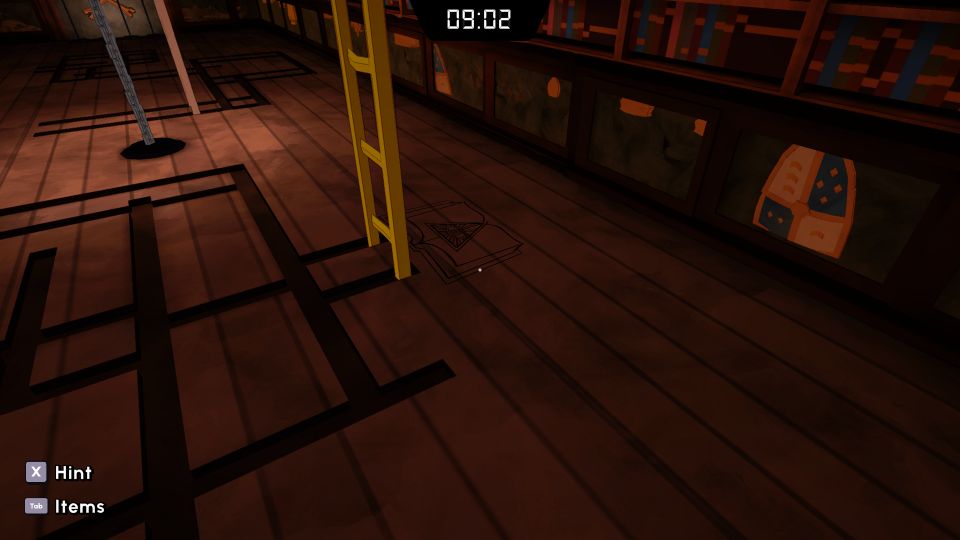 Climb the ladder towards the end of the room first. 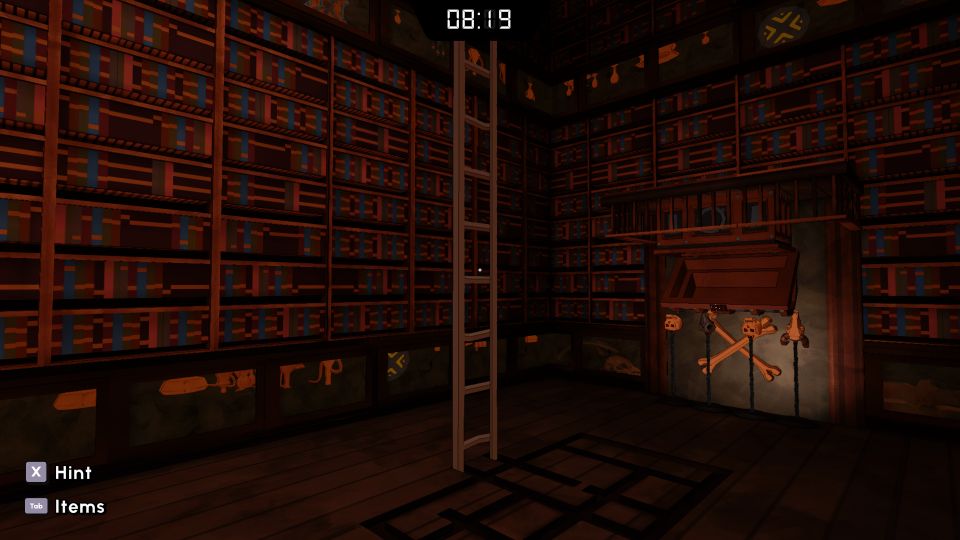 You will see a lever. Pull it. 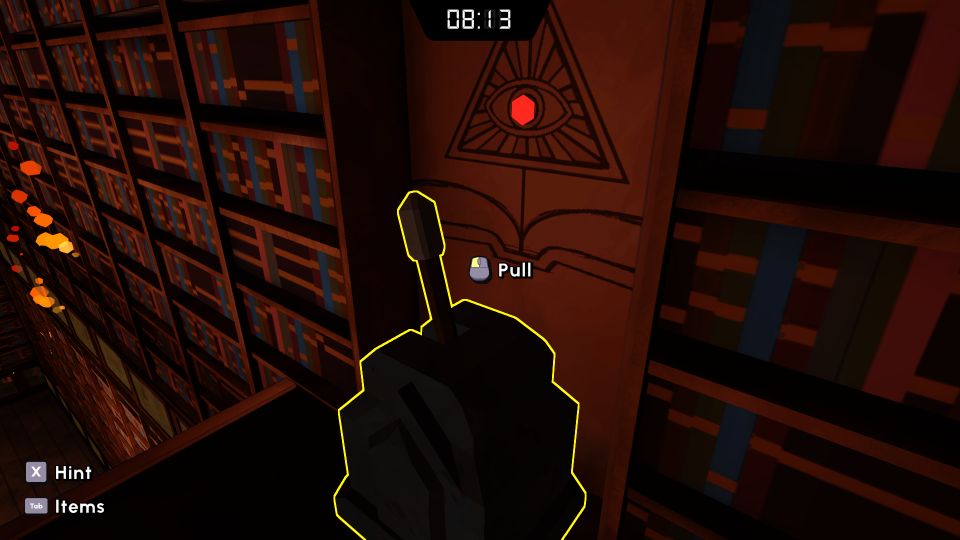 Go to the next ladder and climb up. You will see a Strange Tile to pick up. 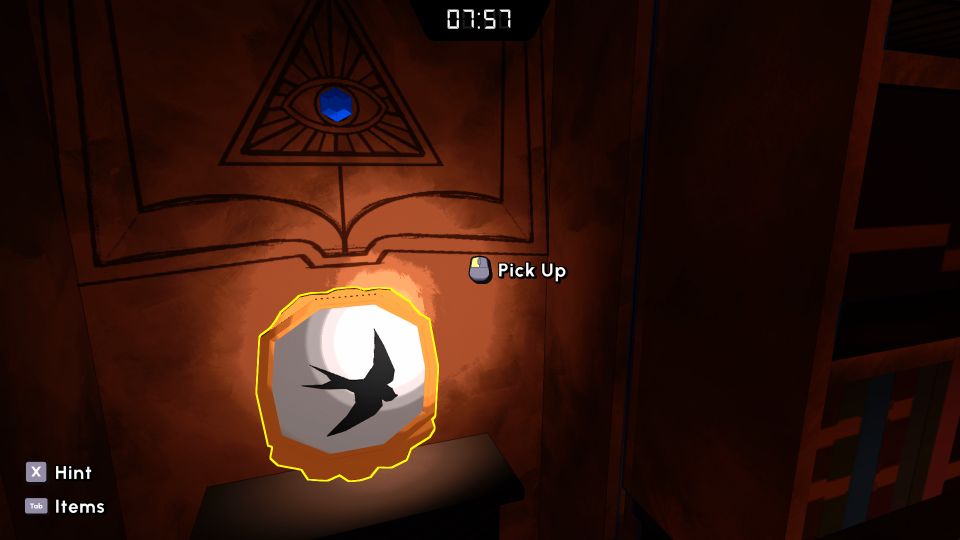 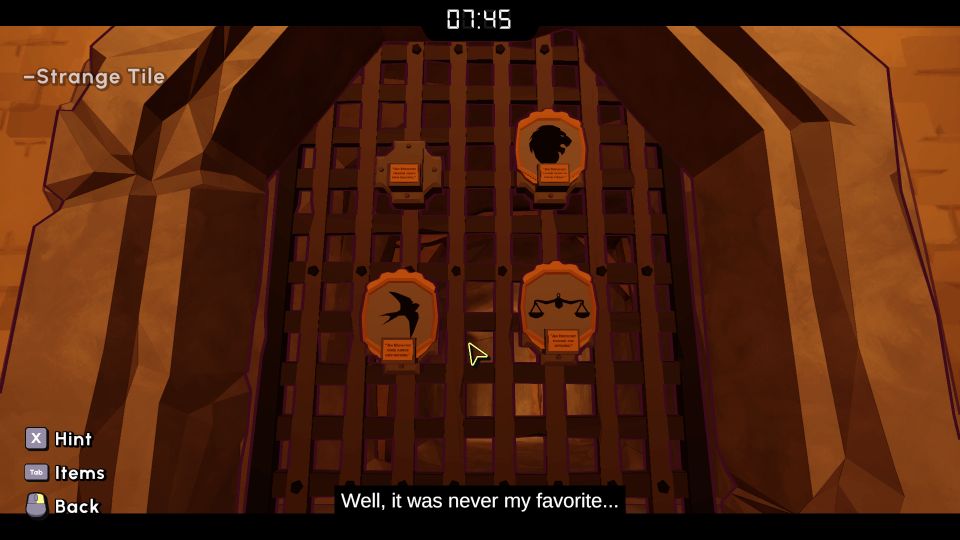 Now, head over to the hourglass puzzle.

The clue is right above it.

If you look at the glass frame, you will see four hourglasses. 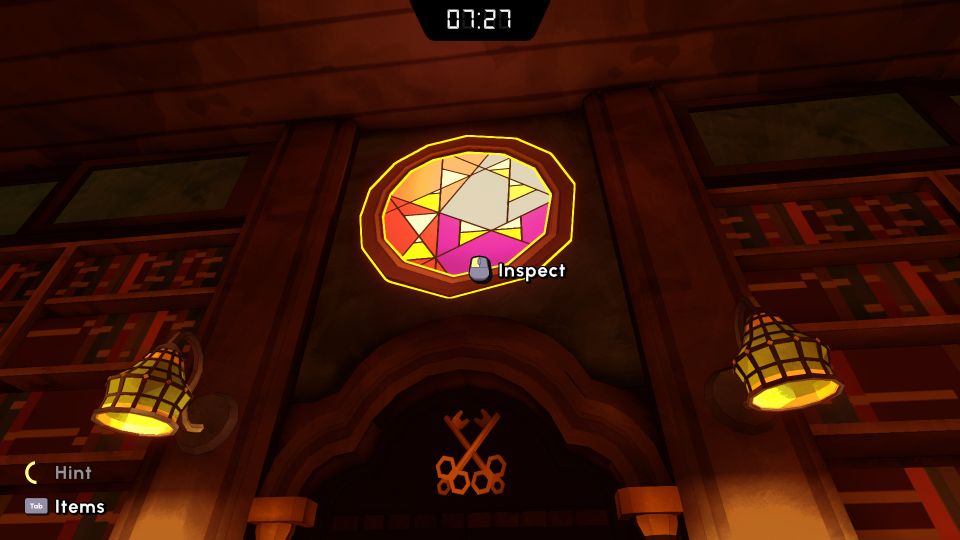 Turn the hourglass in a way that matches the glass frame above and the door opens. 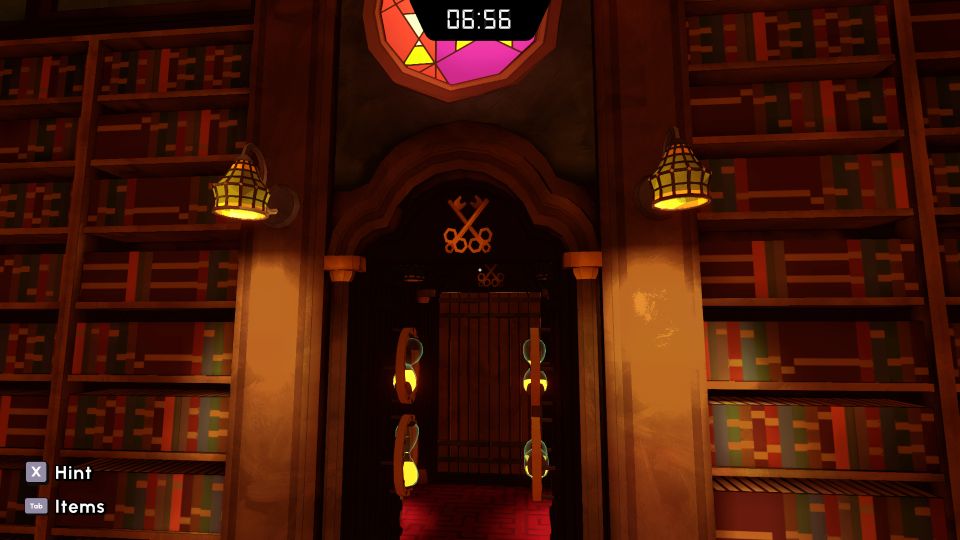 You will then reach a room where you see B –> A.

This is a cipher shift where you need to move each letter of the alphabet 1 place back. For example, F becomes E and J becomes I.

In the room, you will see three sets of letters which are blue, yellow and orange.

The blue letters BJS if you move one place back becomes AIR. Hence, rotate the blue line so that you get the AIR symbol.

Do the same thing for yellow and orange letters. Yellow is the FIRE symbol and orange is the SUN symbol. 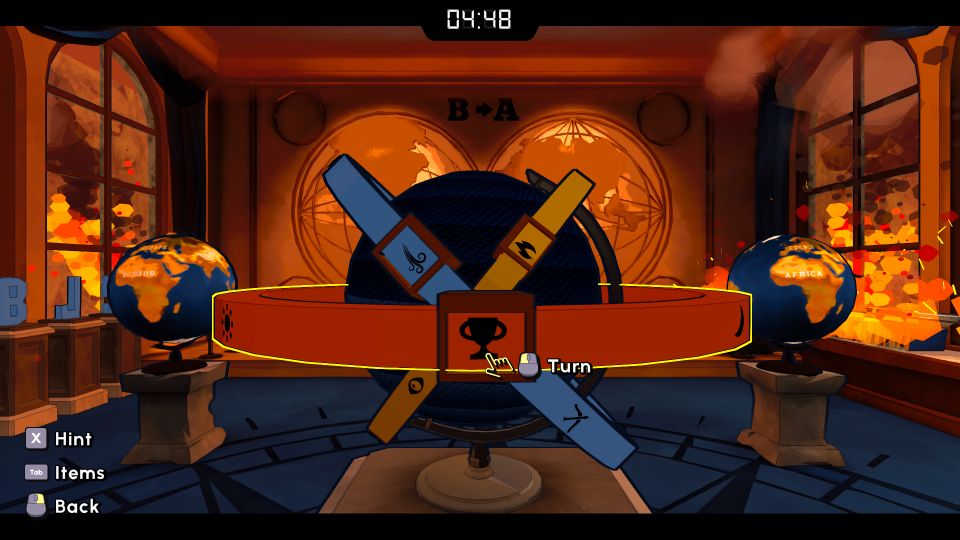 Place all of the Strange Tiles on the gate and you’re done. 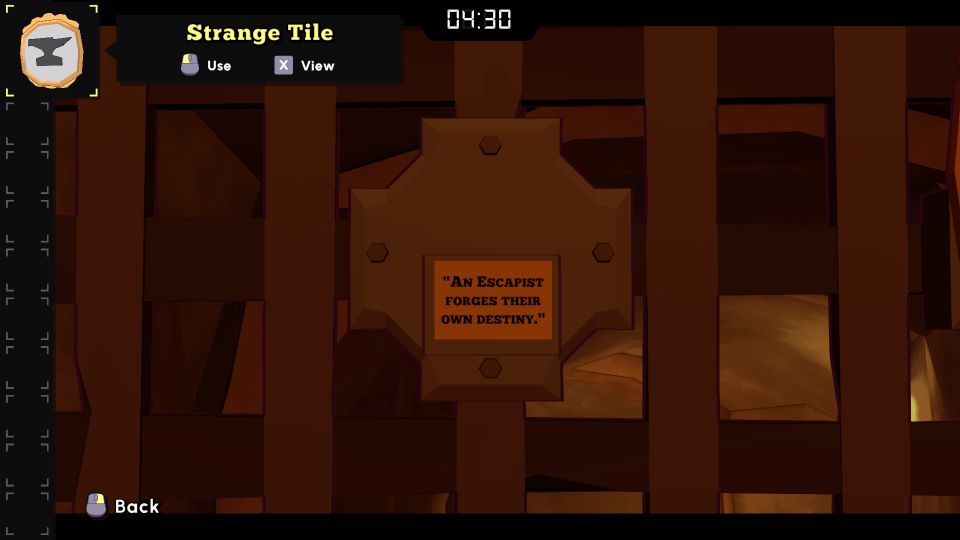 What Lies Below (Escape Academy) Guide