Here, you need to complete the Goals and Challenges including 4 VB Transfers, finding the Secret Tape and Ollie the Magic Bum five times.

You can also look for the Vicarious Visions (V) collectible and the stat points.

Here are some tips and guide on Venice Beach in THPS 1 + 2.

Read also: How To Complete All Gaps in Venice Beach

Below are the Goals and Challenges for Venice Beach Park. 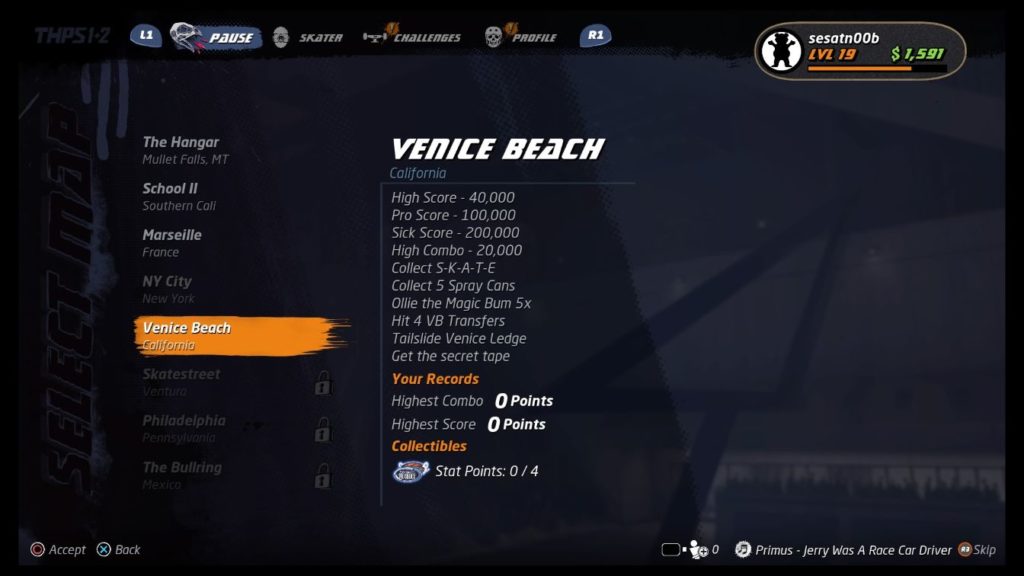 The letters are all clearly visible in this map. You’ll see “S” near where you spawn (above you).

If you go further on the rooftop, you’ll see “K” as well. 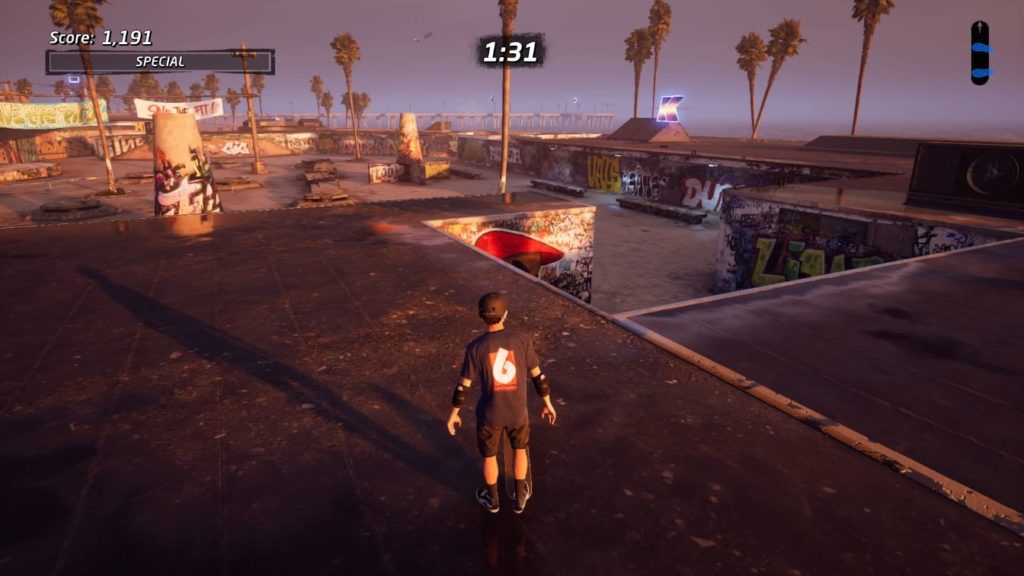 “A” is also located on the rooftop. 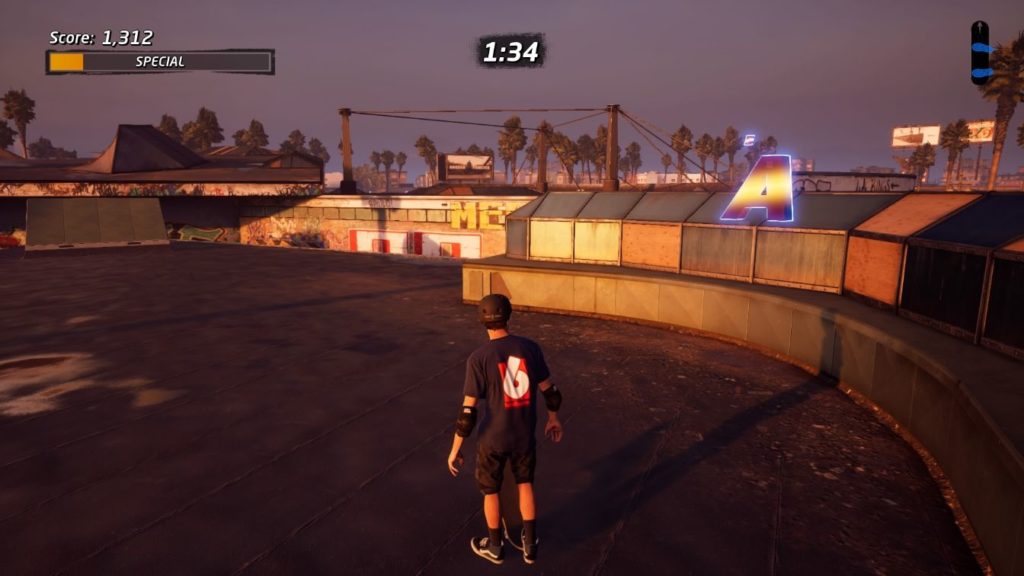 The letter “T” is on the highest part of the roof and you can use the half pipe to reach it. 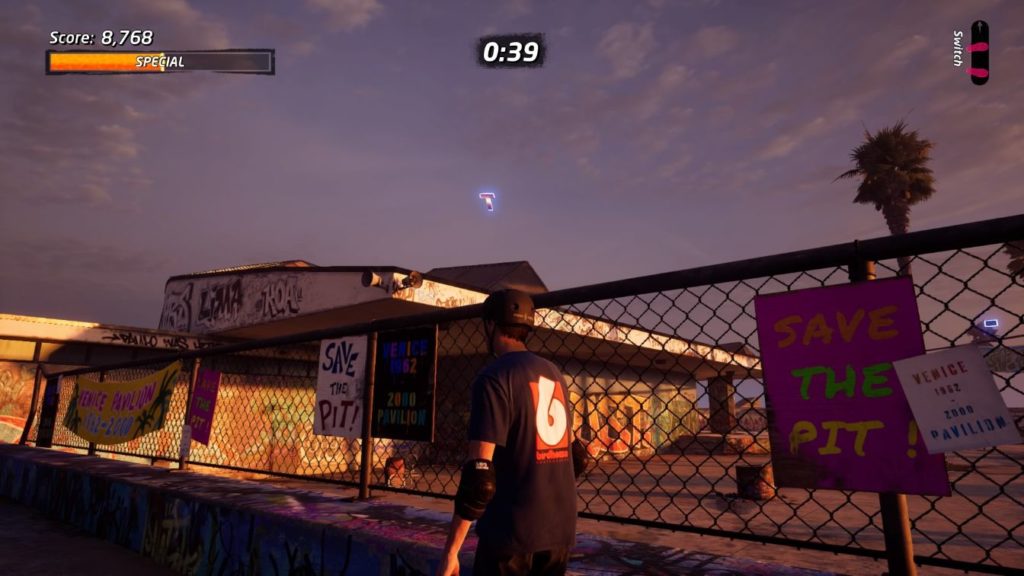 The last one “E” is located at one of the edges of the map, also above the half pipe. 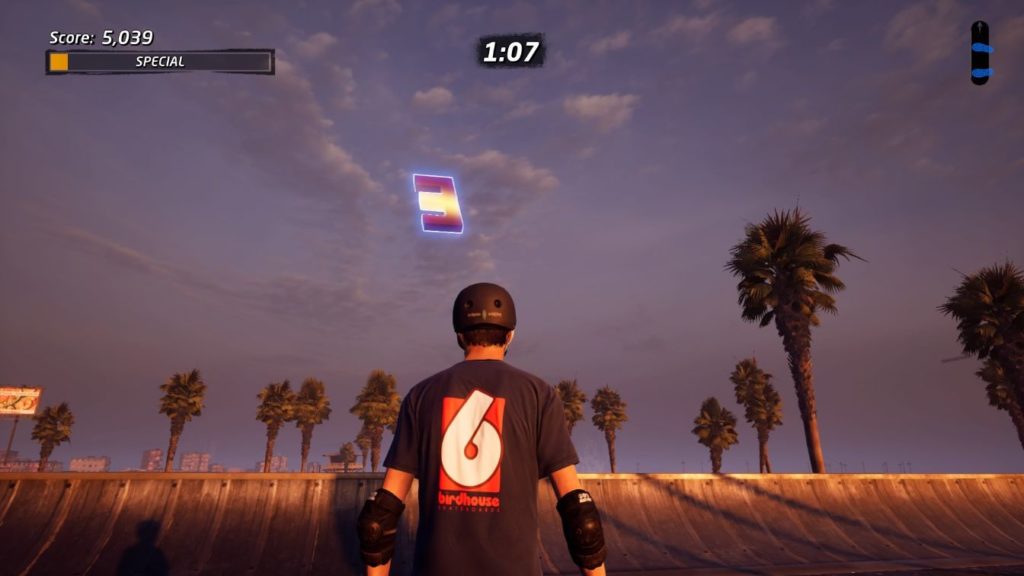 The V symbol is also easy to get this time. You simply need to reach the rooftop and then use the ramp to get it.

If you don’t have enough speed, try Boneless to jump higher. To get the Boneless trick, press UP twice before you jump. 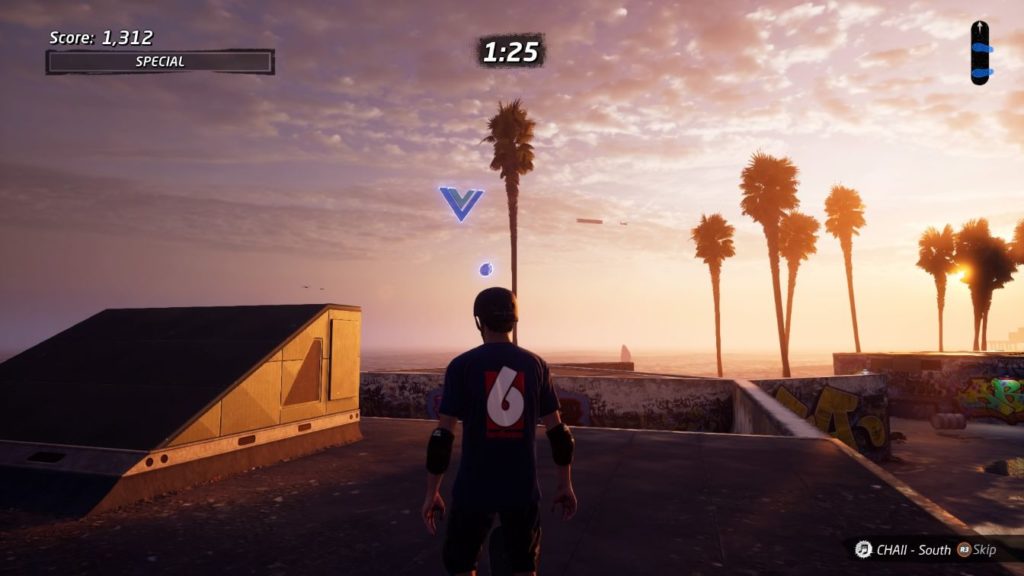 How to get the Spray Cans

There are five Spray Cans in total, and they’re also easy to spot.

The first one is near where you spawn (towards the left). 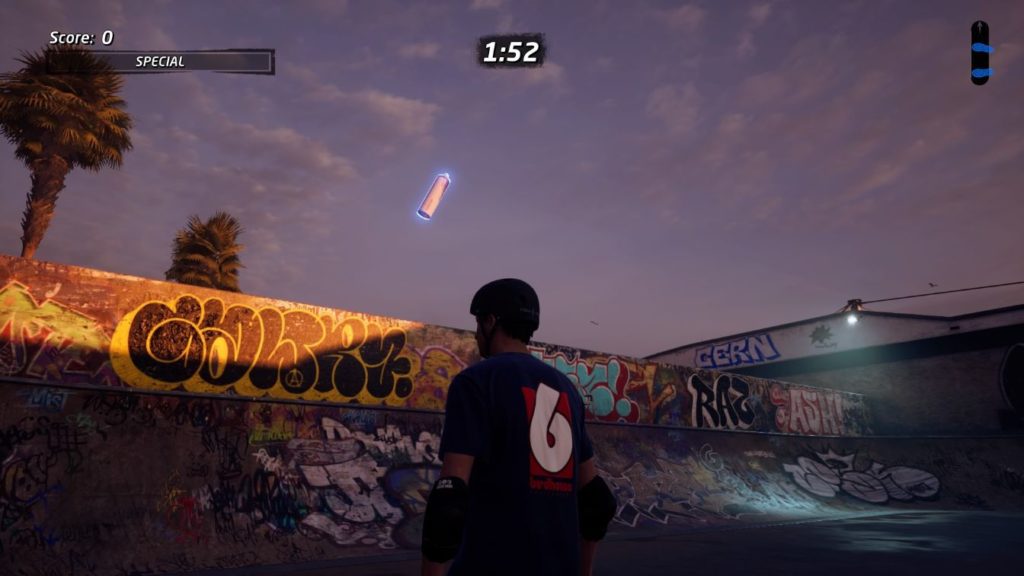 You’ll find another at the fence near your spawn area. 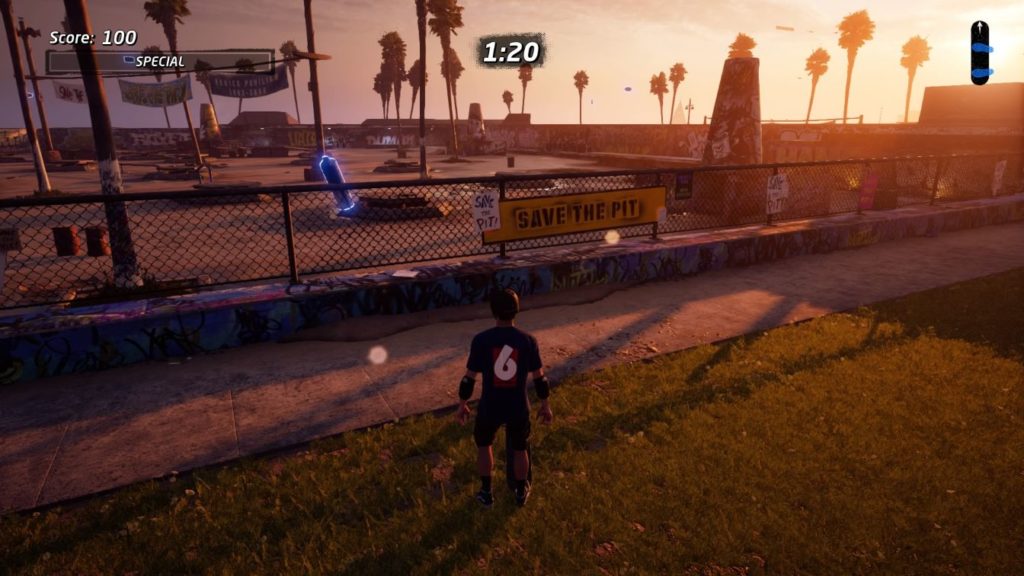 The third one is at the edge of the map. Assuming you start from the spawn point, go towards the right (cling to the fence). You’ll see a half pipe at the end and the Spray Can is above it. 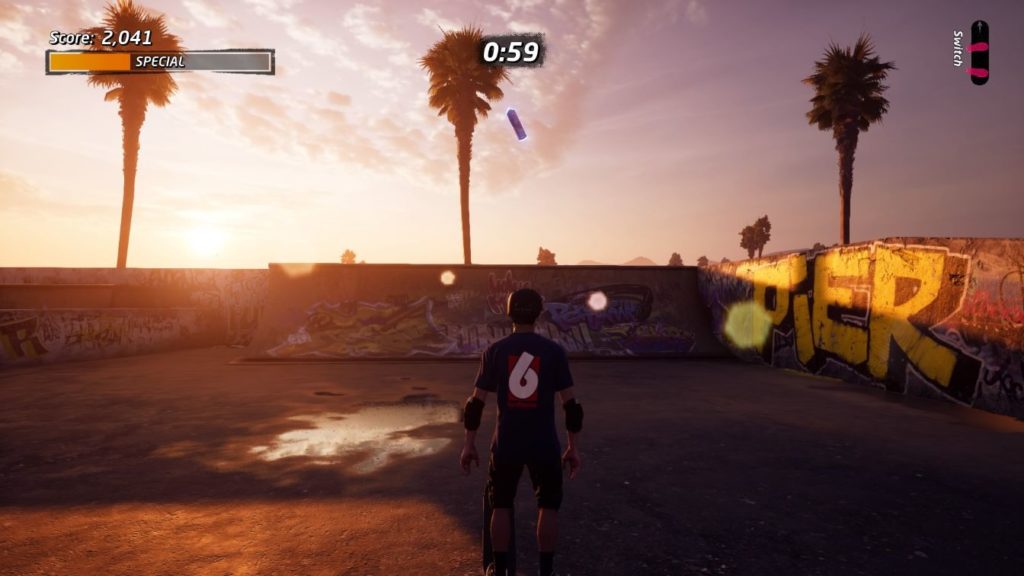 After the third can, go towards the left and you’ll reach more half pipes. Another Spray Can is here. Do a Transfer on the half pipe to get it.

The last one is in a slightly more hidden area. It’s also one of the Bum’s locations. 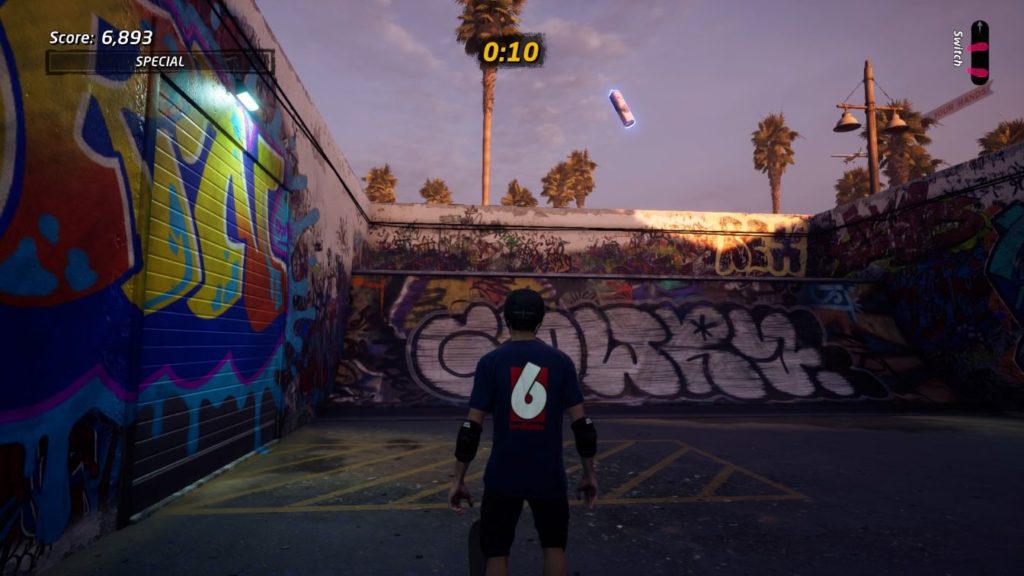 There are four stat points in total, and all are visible as well.

Images are all shown below. 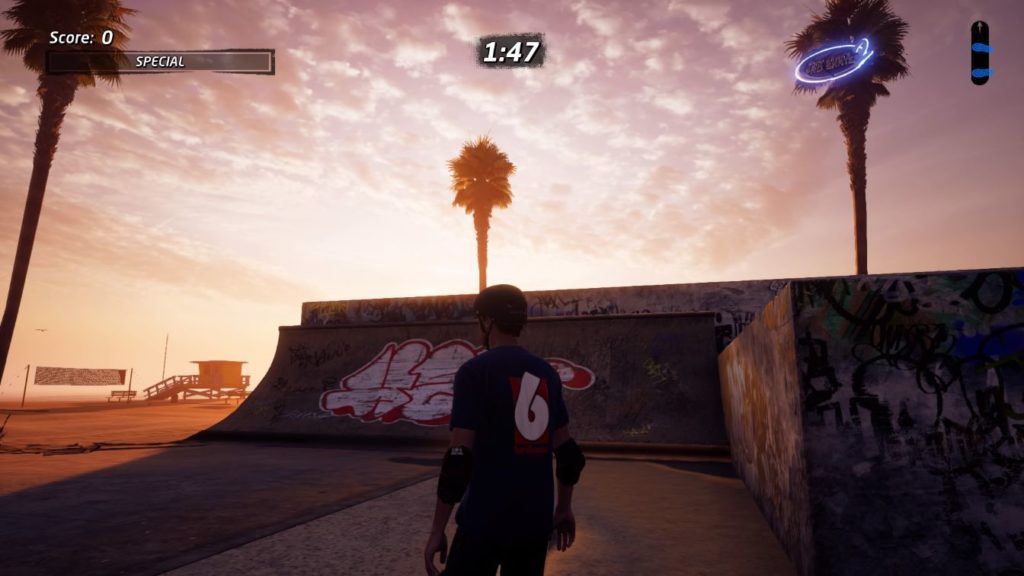 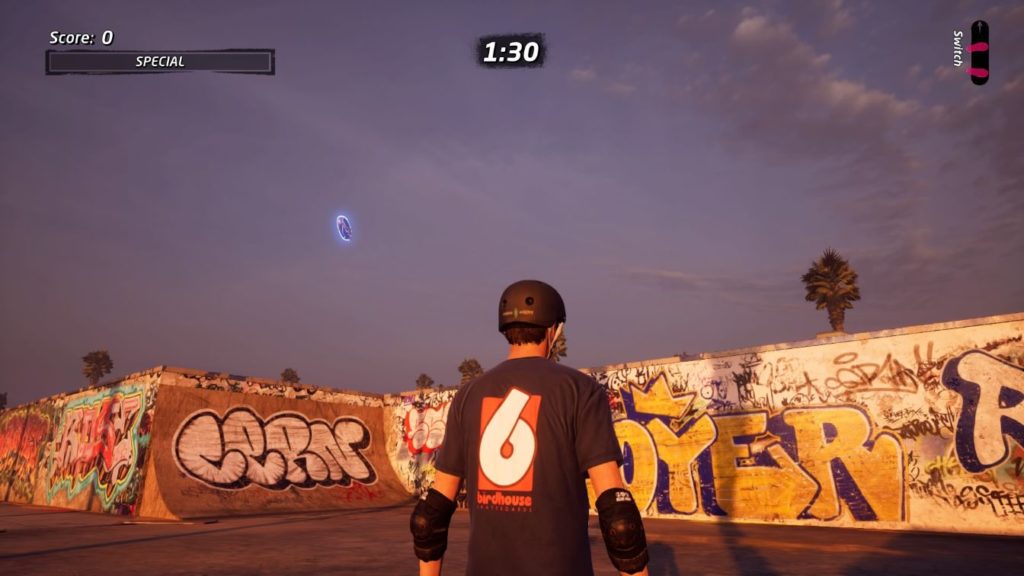 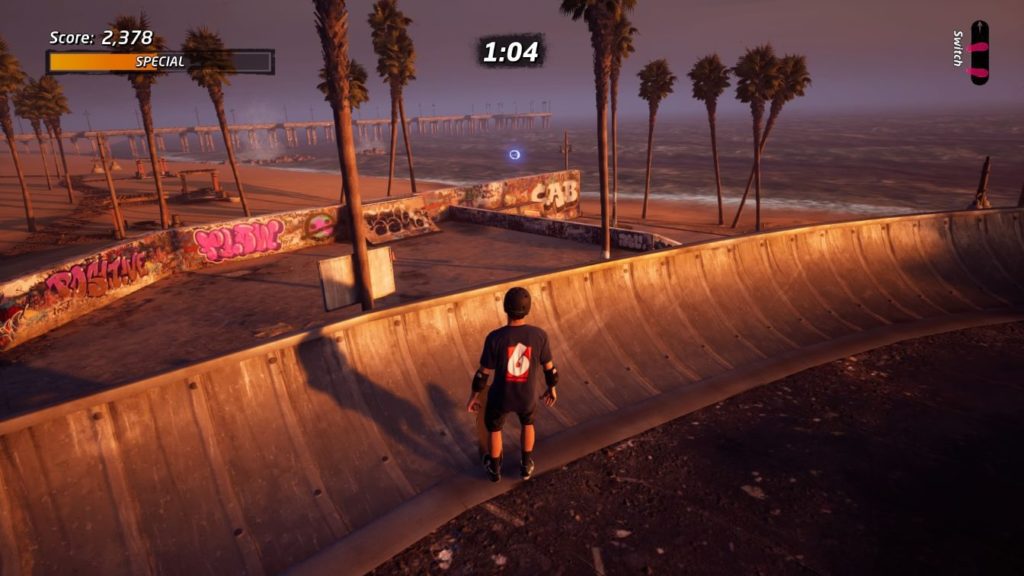 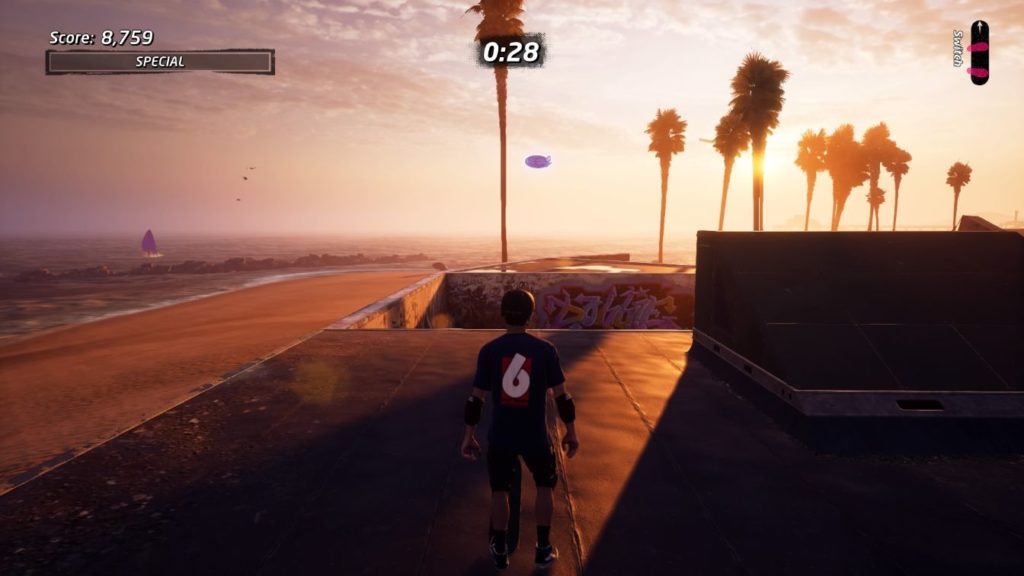 How to reach the Secret Tape

The Secret Tape is located on a rope, and to get there, you’ll need to jump high enough. 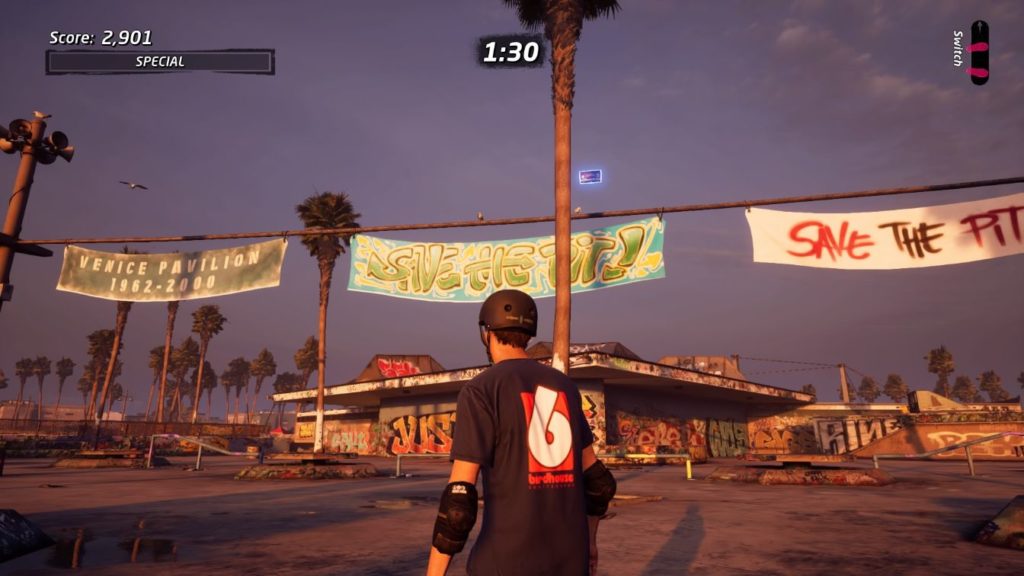 The easiest way is to use the ‘small ramp’ directly under the rope.

Get into ‘Special Mode’ and build some speed before jumping. Use Boneless (press UP twice before jumping) to jump slightly higher.

If you jump high enough, you can grind on the cable and get the tape.

How to find the Magic Bums to Ollie

This one is slightly harder as you need to follow the right order.

There will only be one Magic Bum at one time.

The first one is located towards the edge of the map. From the spawn point, it’s located northeast. After you Ollie (jump over) the Bum, he will disappear and appear at the second location.

The second location is near the first. It’s in this hidden area. It’s the same area where you can find a Spray Can.

Once you’re done with that, go back to your spawn point. From there, go towards the right side following the sun. You will see the Bum here (image below).

From the third location, you should see a half pipe in front of you. Go towards the end and turn left.

After turning left, look towards your left and you will see the Bum sleeping here.

The last location is directly behind your spawn point.

How to get 4 VB Transfers

Transfer means you jump from one half pipe to another. There are four specific VB Transfers.

The first one is towards the right of your spawn point.

Follow the sun until you see this long half pipe.

This Transfer is the hardest of the four, as you need to go from the first ramp to the last, skipping the middle ramp. It might take some practice to do it perfectly.

Either direction is fine.

Once you’re done with that, continue following the route and you’ll see two separate half pipes in front of you.

Instead of doing a Transfer between them, use the half pipe shown in the image below instead. You have to Transfer over the structure to the next half pipe.

Below is the image of the other half pipe.

Once you’re done with the second, the third is nearby. Look for this area shown below (same area where you find the first Magic Bum).

You have to do a Transfer over to the other side.

The last one is located towards the edge of the map. Look for this half pipe which says G.A., and do a Transfer over the wall to the other half pipe.

How to Tailside the Venice Ledge

The Venice Ledge is located facing the sea. It’s at one of the edges of the map.

You simply need to perform a Tailside as you grind down the ledge. It is LEFT OR RIGHT + Triangle if not mistaken.