A Strange Story in Konda is a side quest available in Inazuma.

Your task is to investigate Konda village and help remove an electro barrier.

Here’s a walkthrough of A Strange Story in Konda in Genshin Impact. 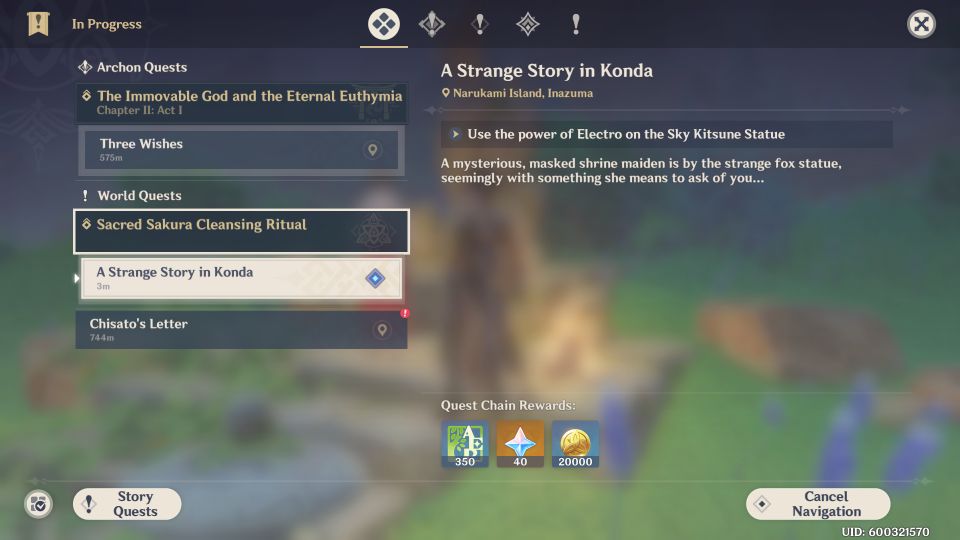 To begin the quest, head to the location shown below, marked by the player location. 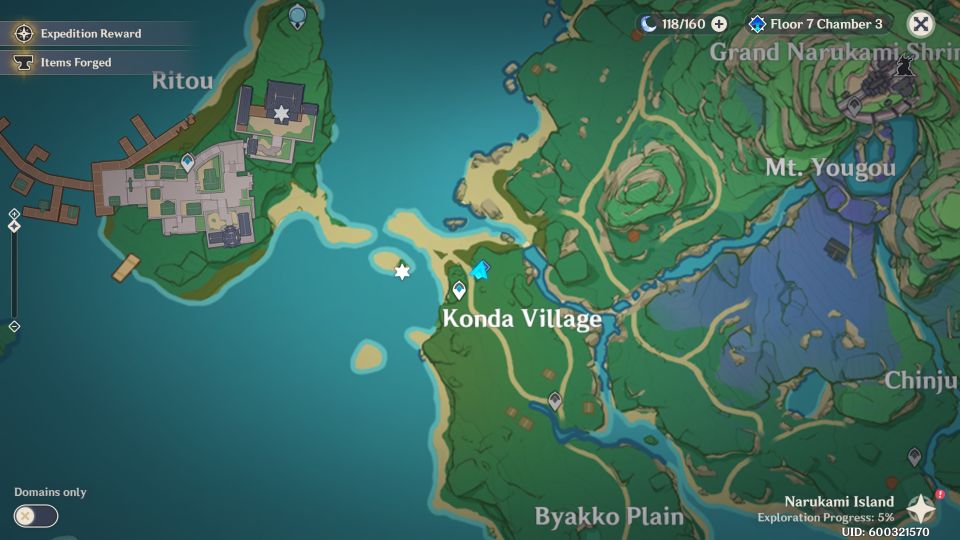 Talk to the lady

Speak with the unknown lady at the shrine. 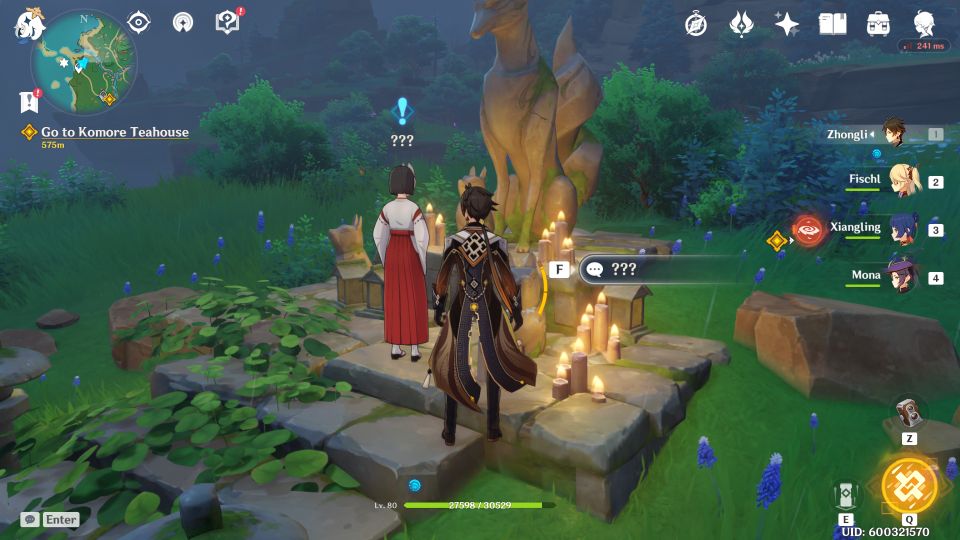 Then, use an electro character to generate an electro attack against the Sky Kitsune statue.

Pick up the item it drops. 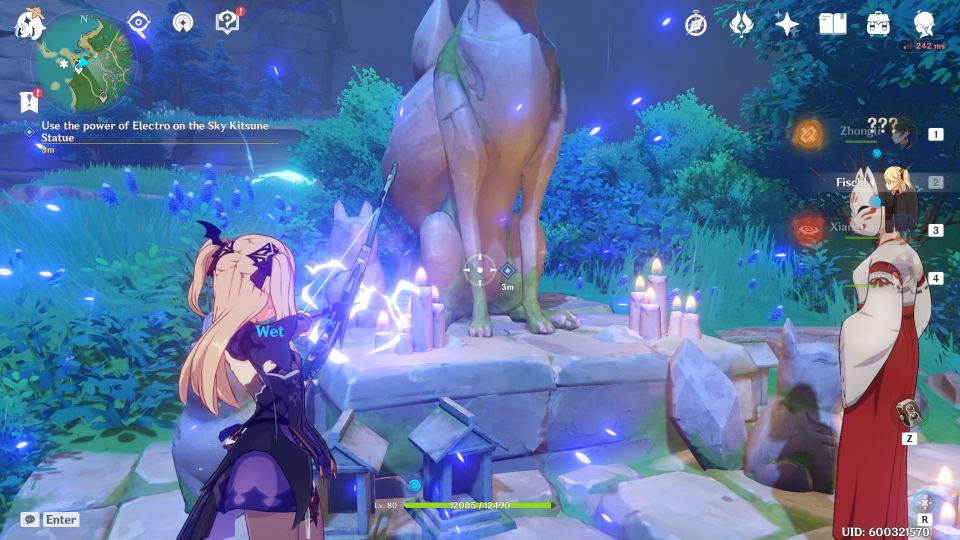 Then, head to Konda village to investigate what’s out of the ordinary.

You can speak to Futaba first.

She’ll then tell you about something in the gully. 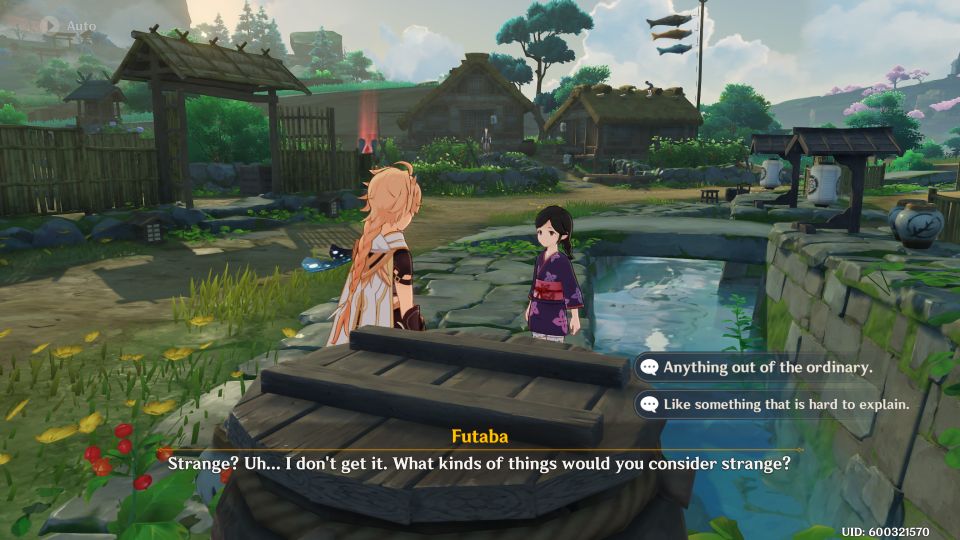 Then, speak to the village chief to look for information. He will not say anything. 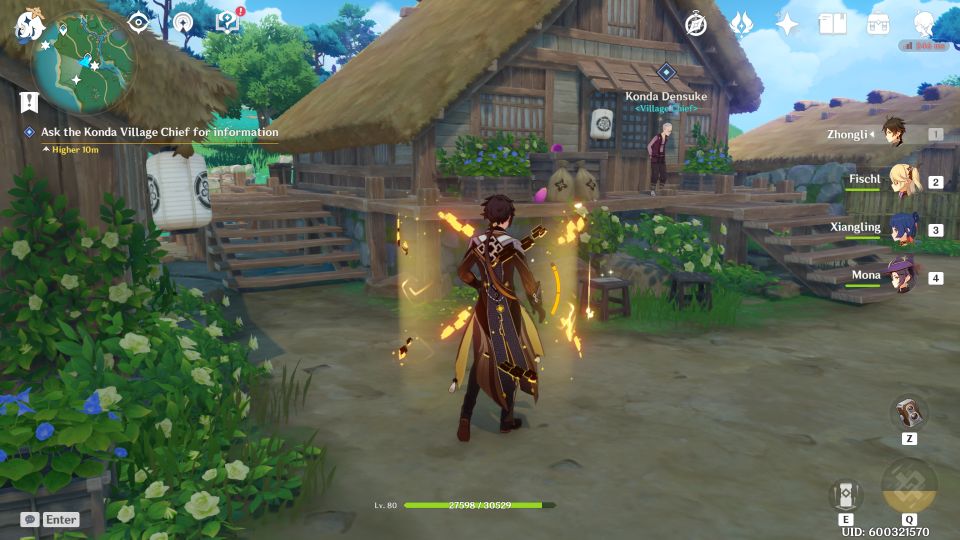 You will then be required to ask other villagers.

Talk to this boy who is on one of the rooftops nearby. He’ll tell you about a cart with hilichurls digging nearby. 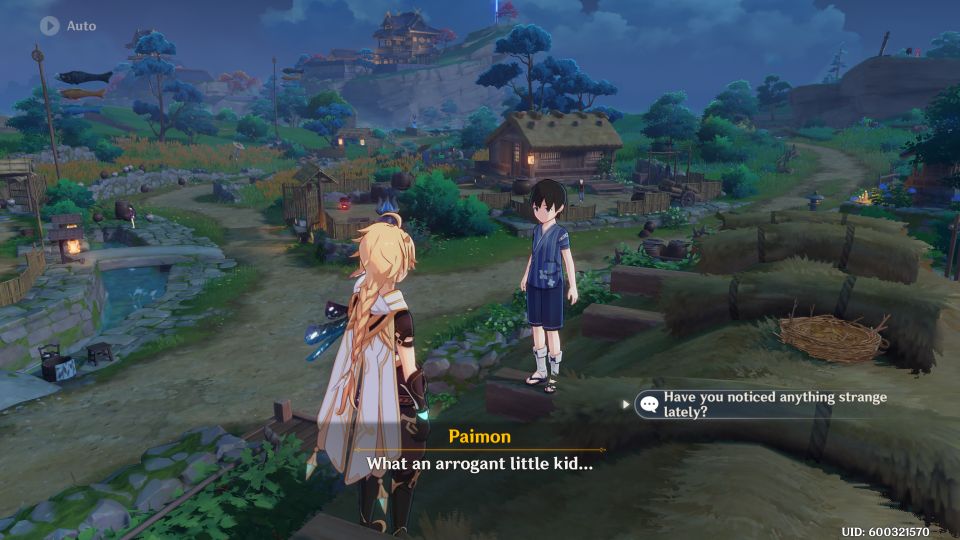 Look for the clues

First of all, head to the gully (stream of water). You’ll see a time-trial activation object.

Nearby, there are some floating bags. Interact with them to get a clue. 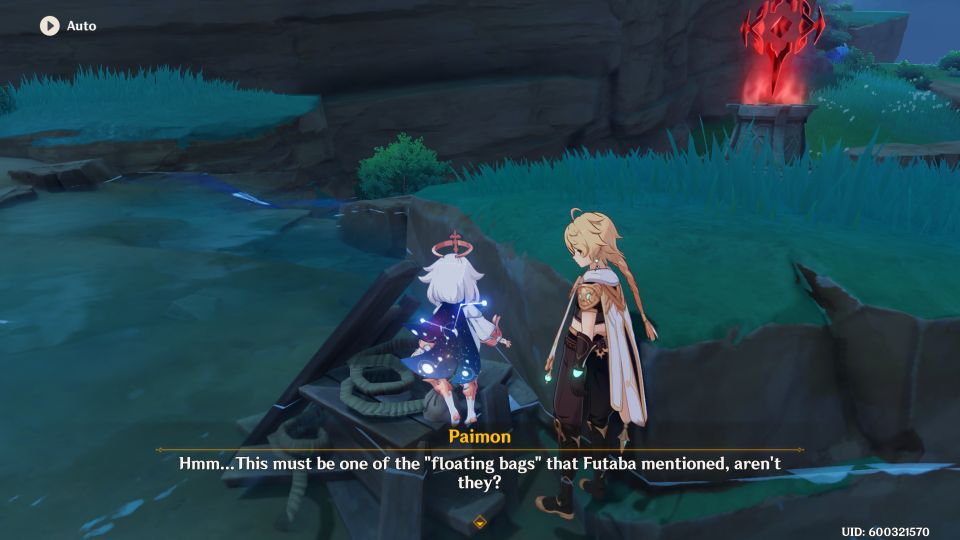 Then, head to the village entrance at the northern part. There’s a broken down cart with some hilichurls.

Defeat the hilichurls first and interact with the cart to get another clue. 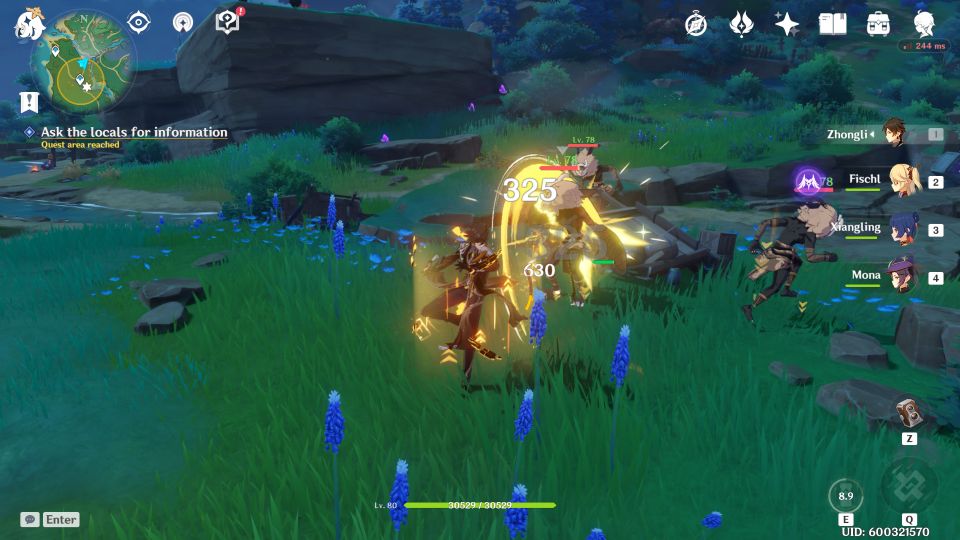 For the last clue, you need to speak to Saimon Eri. She’s the old lady in the village. 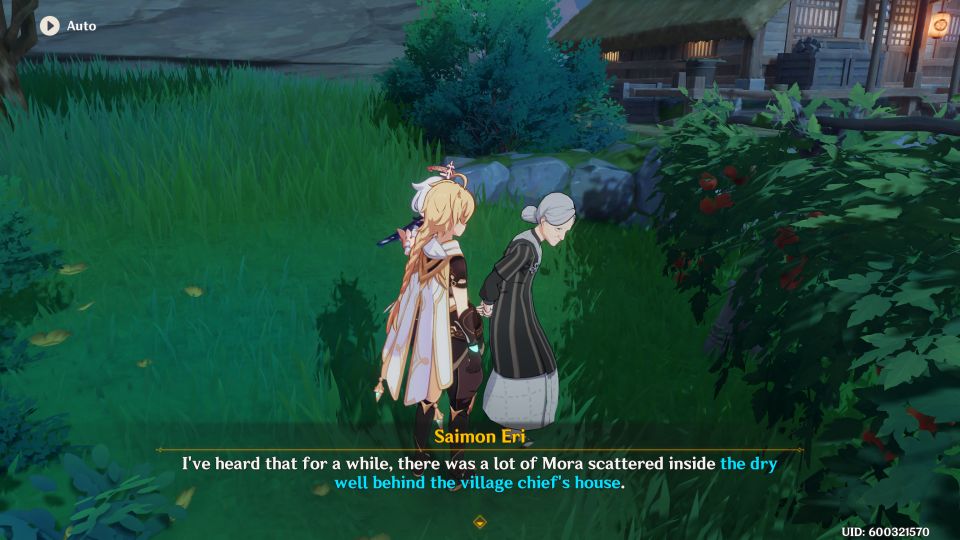 Next, head to the well behind the village chief’s house. You’ll find that the well is locked. Look behind the well for a pouch. 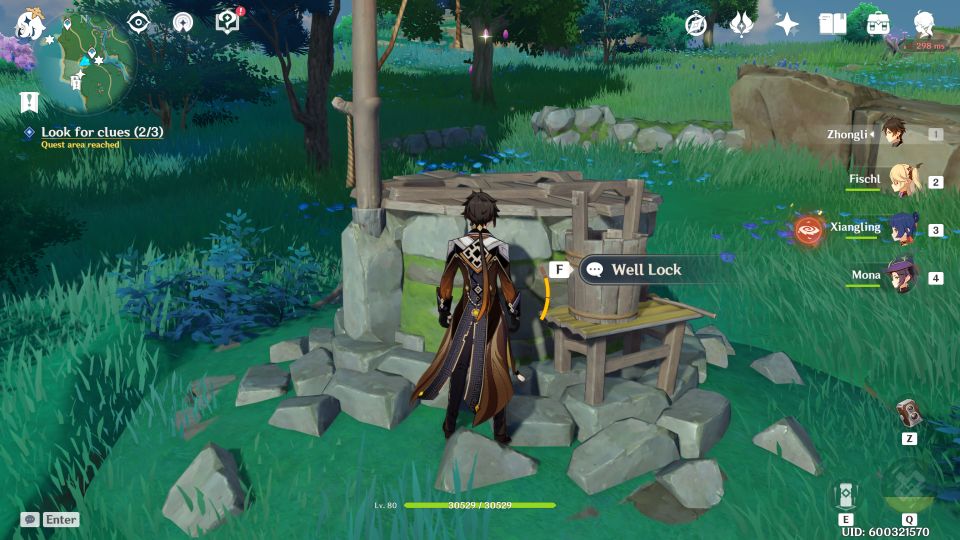 Cut a deal with the chief

Speak to the chief about the pouch. 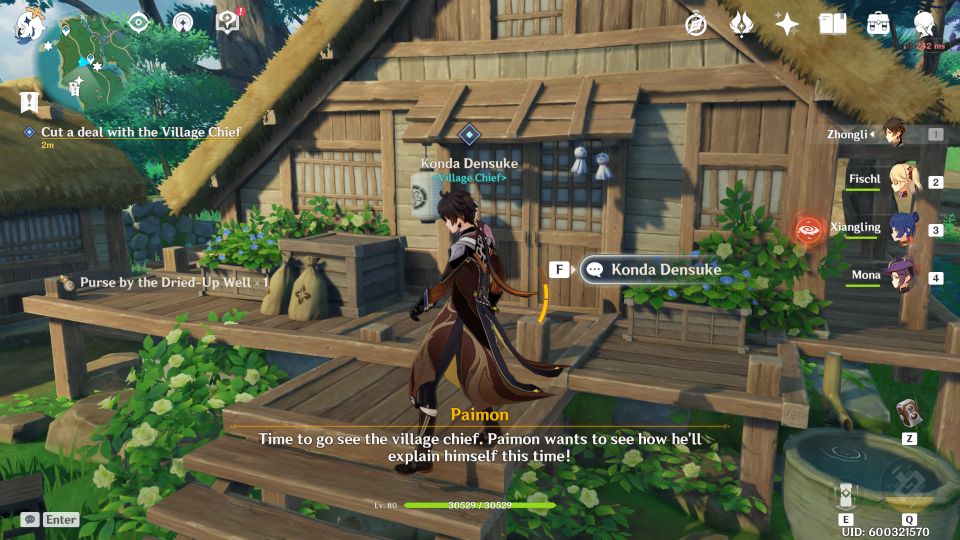 Also, show him the evidence of the cargo bag. 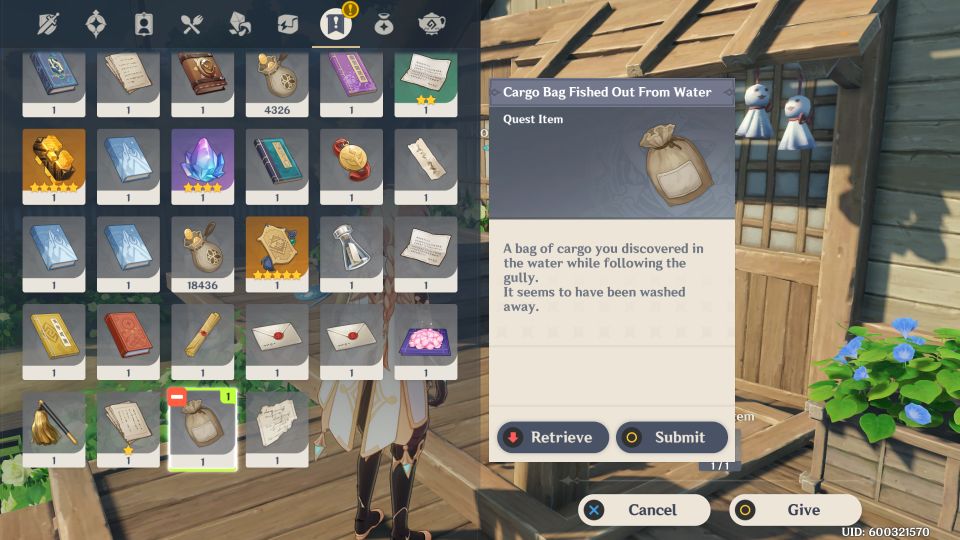 Next, show him the ragged list of goods obtained from the cart. 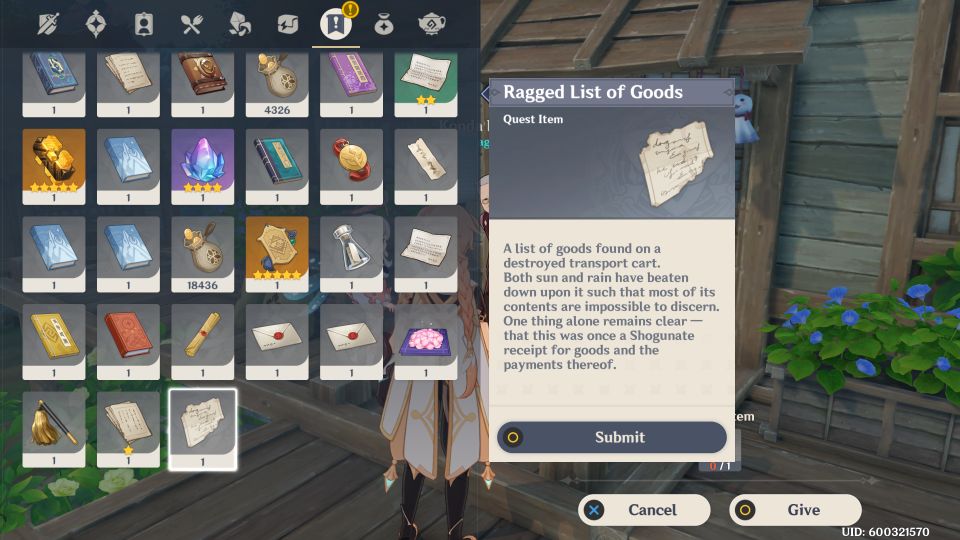 The chief will tell you the whole story. Next, take the notes he placed on his rooftop. 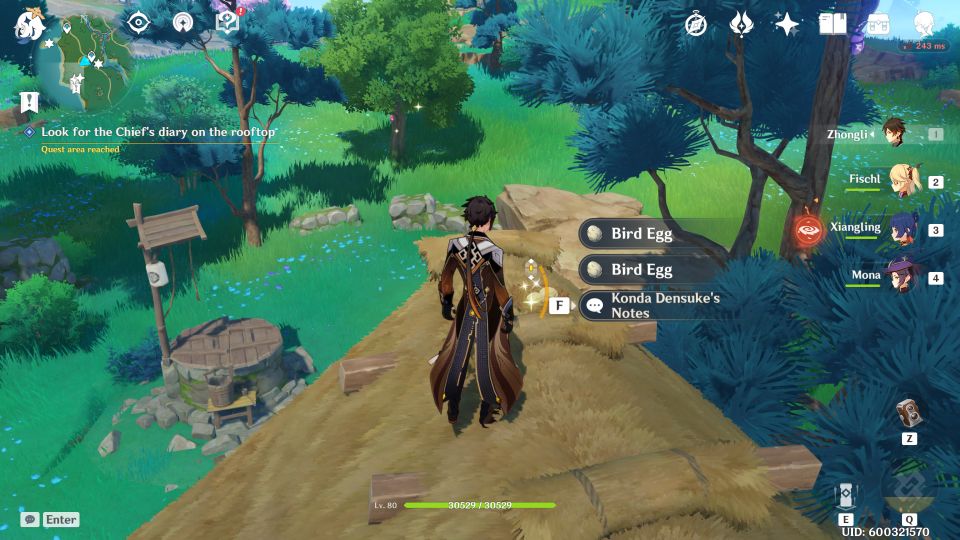 Head to the designated area

Now, follow the location marked on the map. You’ll see some enemies digging around a cart. 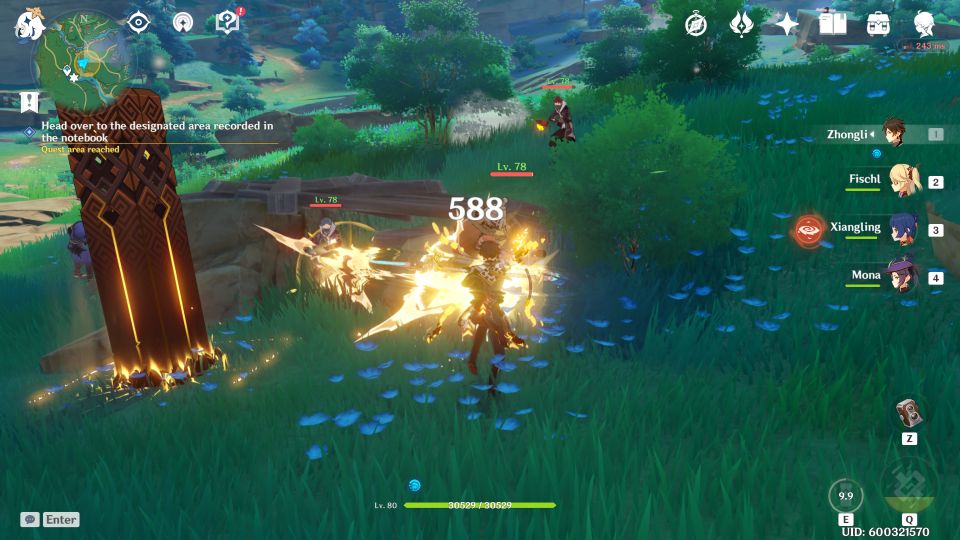 Take out the enemies and then dig. You’ll get a key. 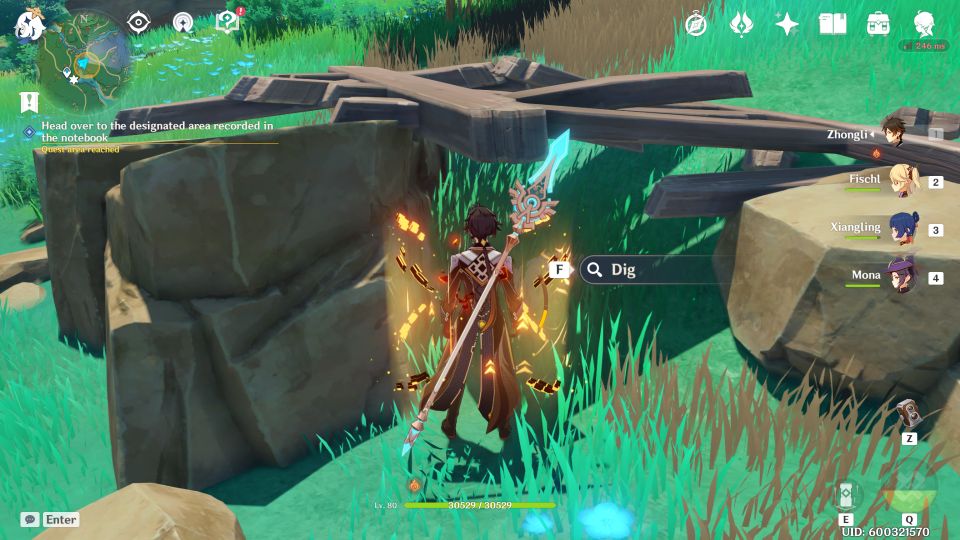 Use the key to unlock the well and then jump down the well. 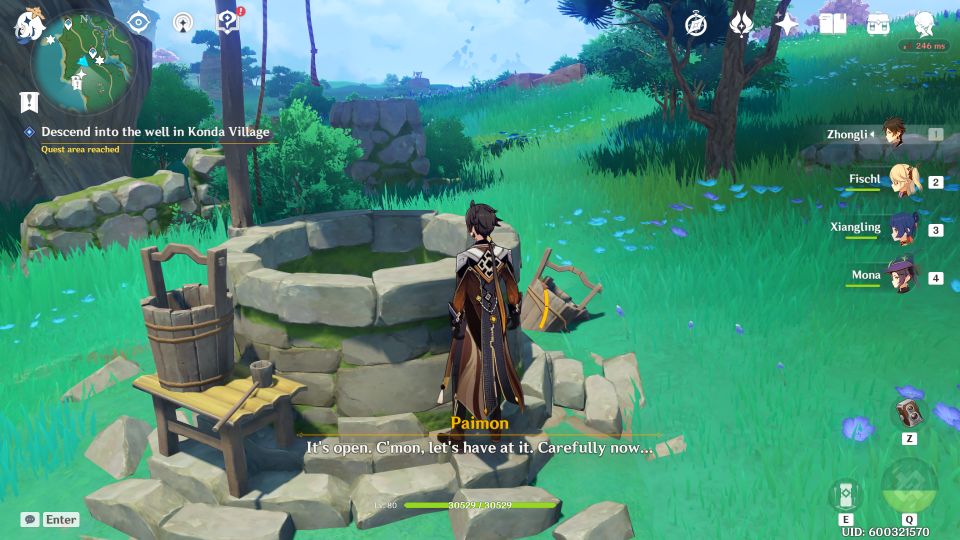 Explore the bottom of the well

There are a lot of things to find down here, including chests. 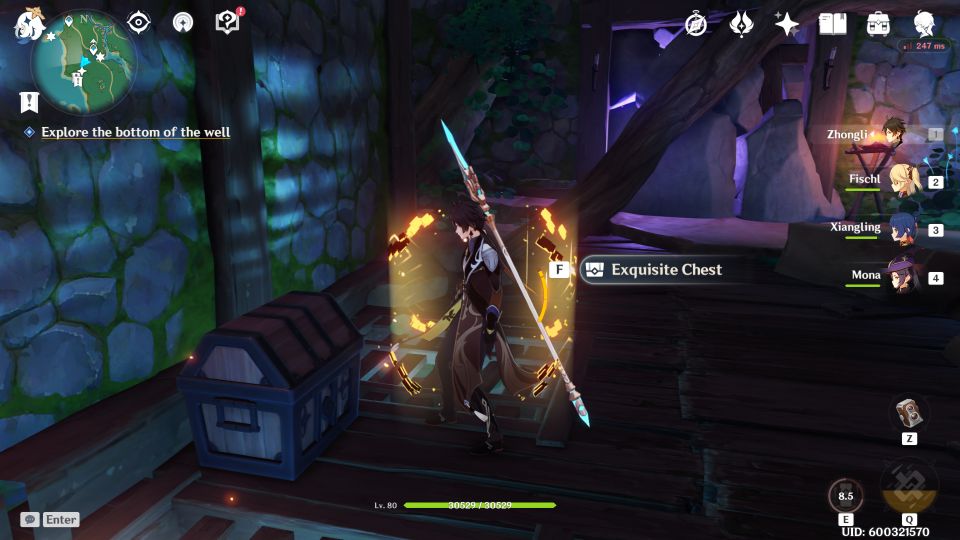 How to solve the puzzle

You will find a special area with a puzzle. 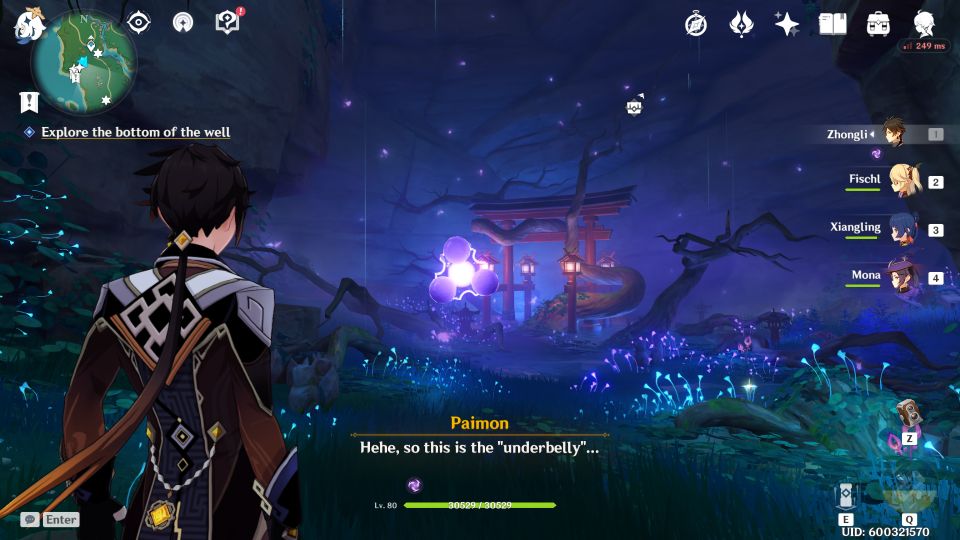 Before that, purify the statue first. 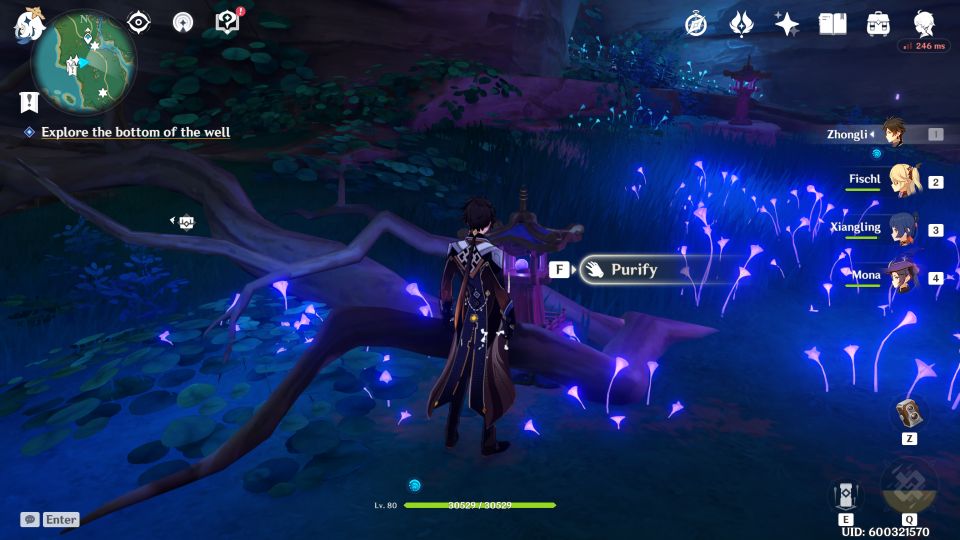 To solve the puzzle, just look at the lines below the shrine arch.

The statue you purified first will be no.1. 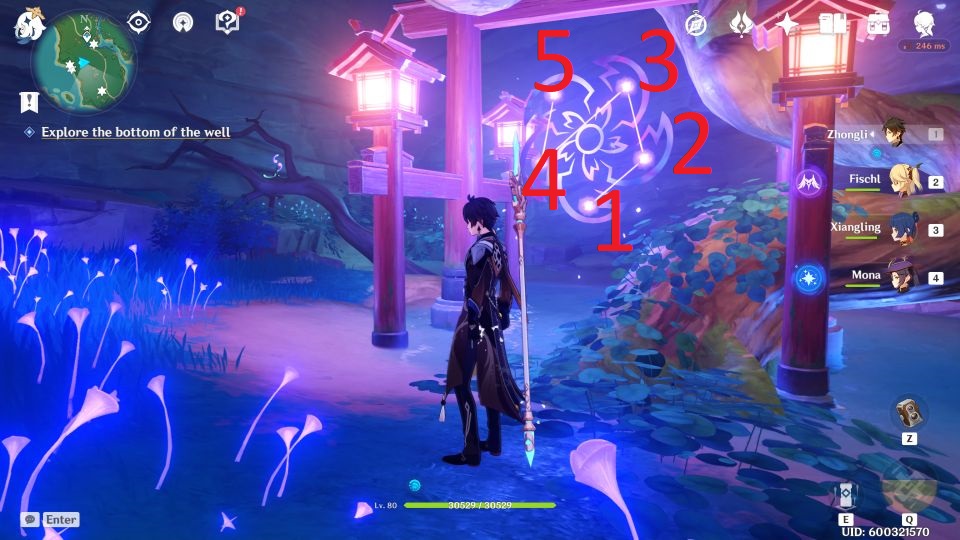 Then, head to the second statue according to the line direction of the image shown above.

At each statue, you can adjust the number. Adjust the second statue to two apostrophes.

Follow the same method and the third statue should have three apostrophes. Follow the sequence for the fourth and fifth statues. 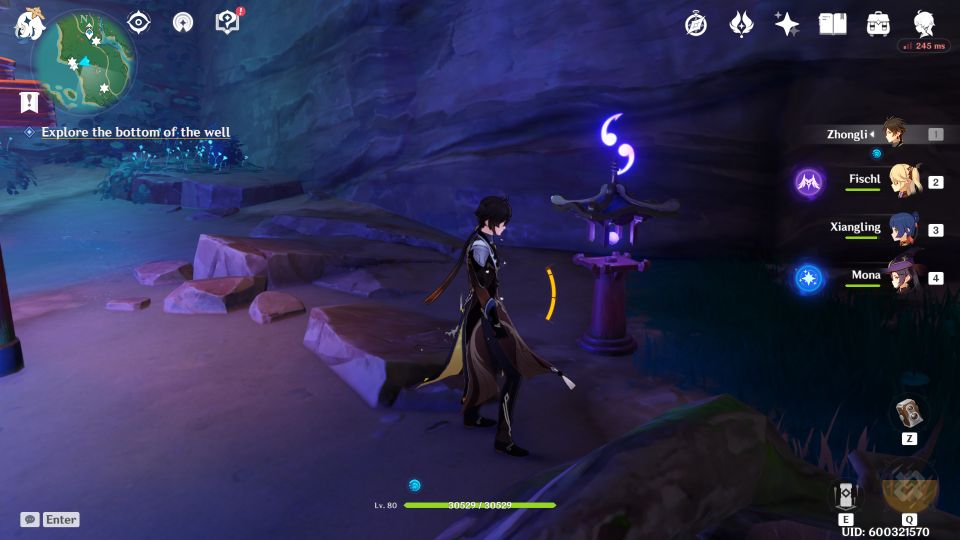 Once you have adjusted all of the statues’ order, go back to the first one and activate it again. You will see some electro lines appearing. 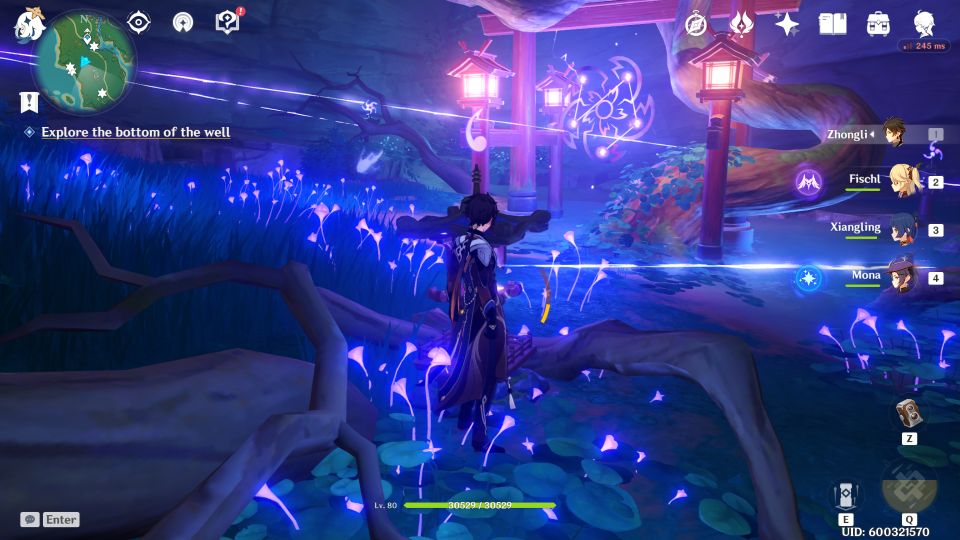 A mini boss Ochimusha will appear. You have to defeat him first. 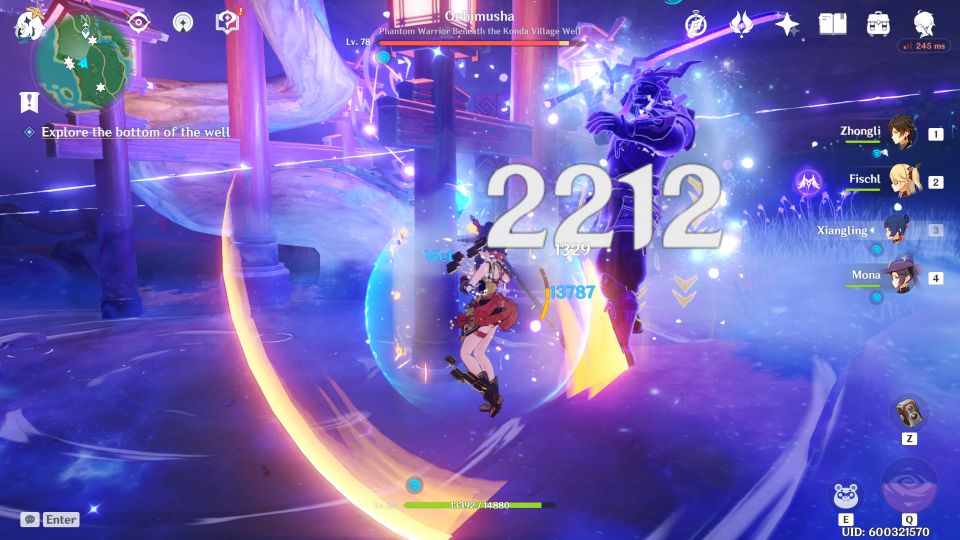 The quest ends after defeating him and you’ll meet the unknown lady again.

Before you leave, you should explore the entirety of the area. You’ll find chests. 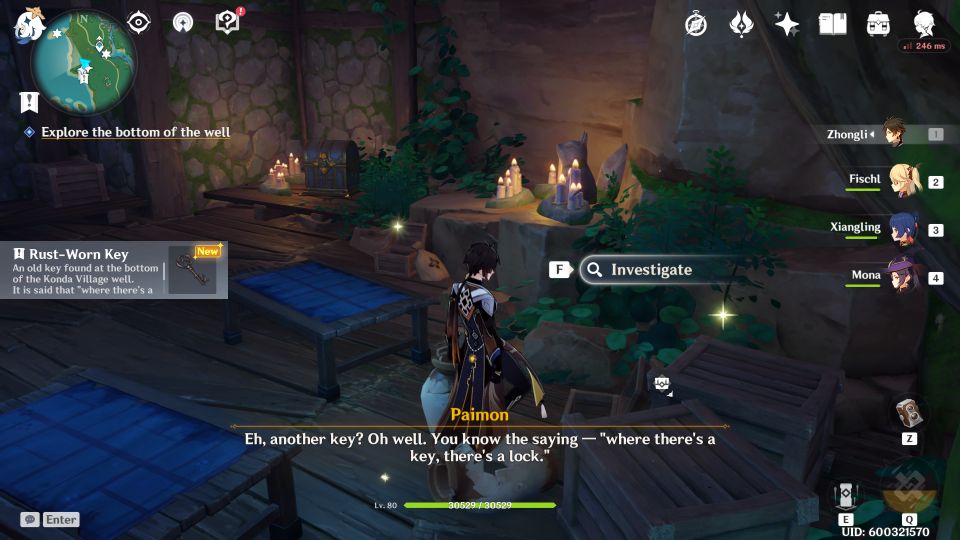 Apart from that, there are two electroculus as well. 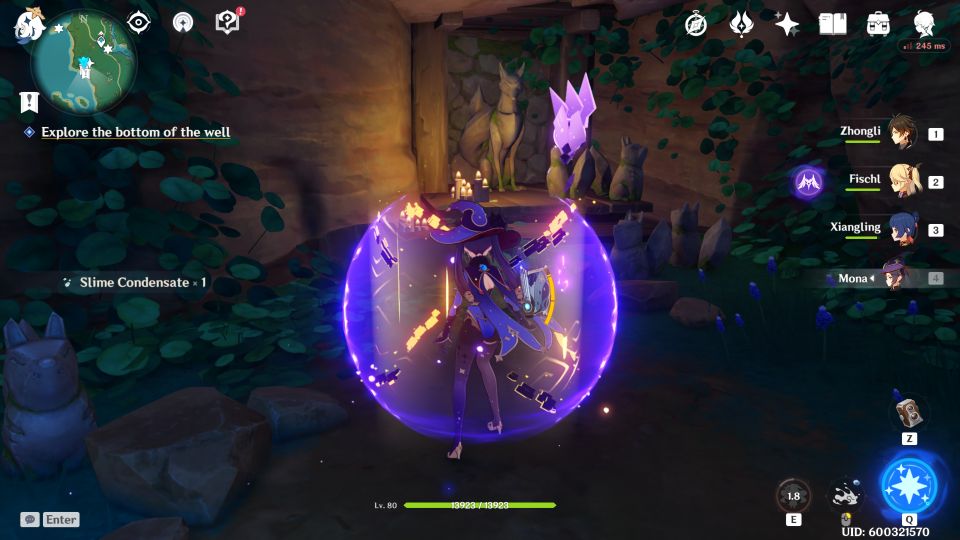 Genshin Impact: How To Use Electrogranum In Inazuma