Practice Makes Perfect is a side mission in Cyberpunk 2077 which is a tutorial.

Your task is to complete all of the four different trainings.

Here’s a walkthrough of Practice Makes Perfect in Cyberpunk 2077.

This mission begins when Jackie gives V a simulation chip. You can choose to not do it.

Talk to the drill sergeant

Once you’re in the simulation, speak to the drill sergeant first. 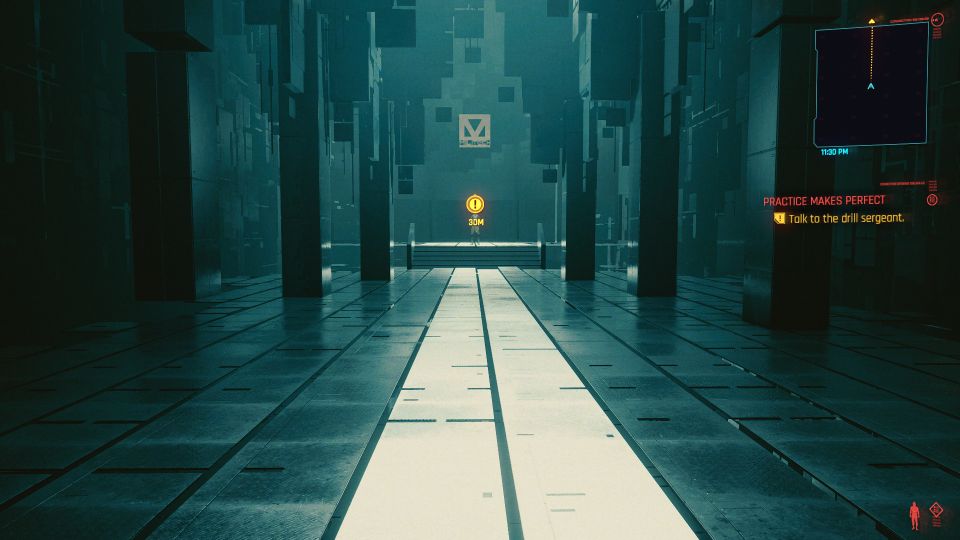 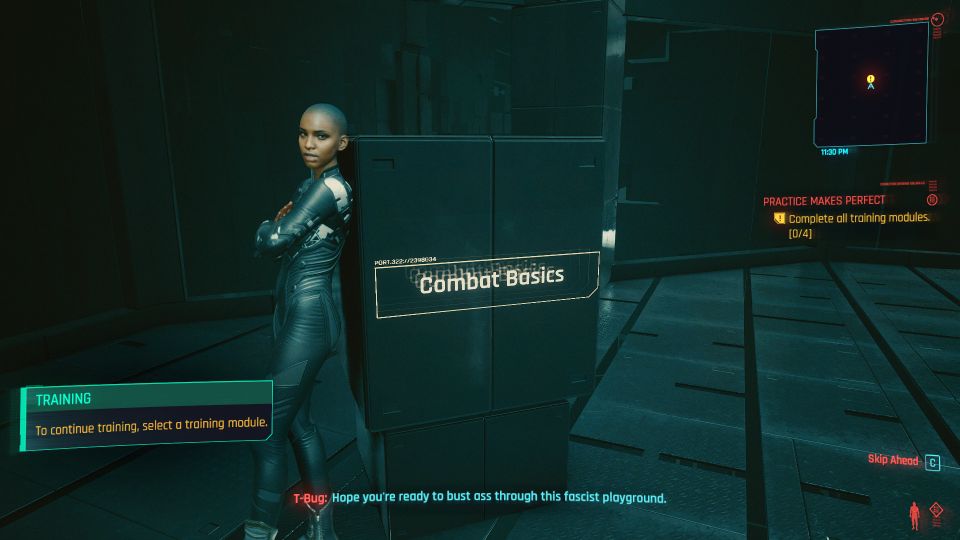 Here, you’re given a pistol first.

The objective is to shoot all of the targets. There will be moving targets as well. 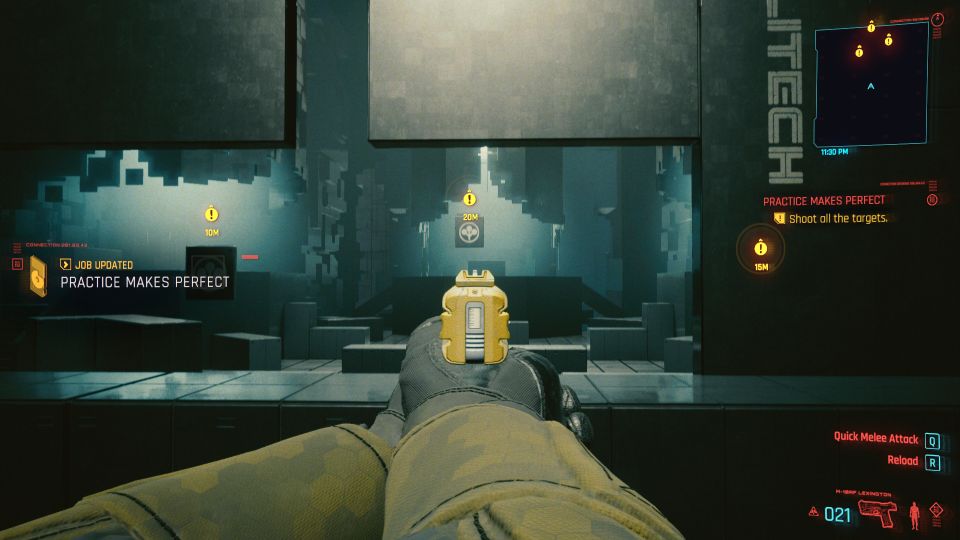 You will then be able to use a rifle and the target will be enemies. 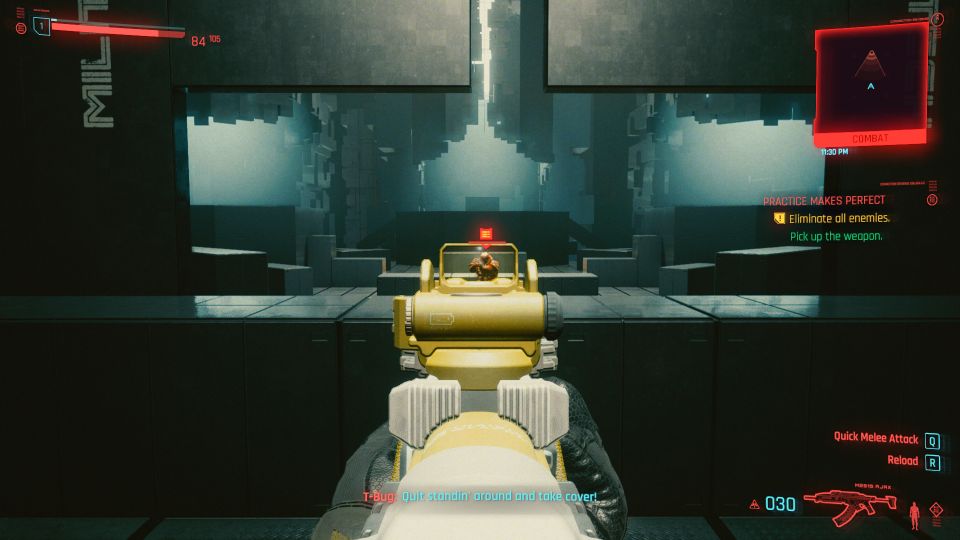 If you get injured, you’ll be taught how to use the inhaler for healing. 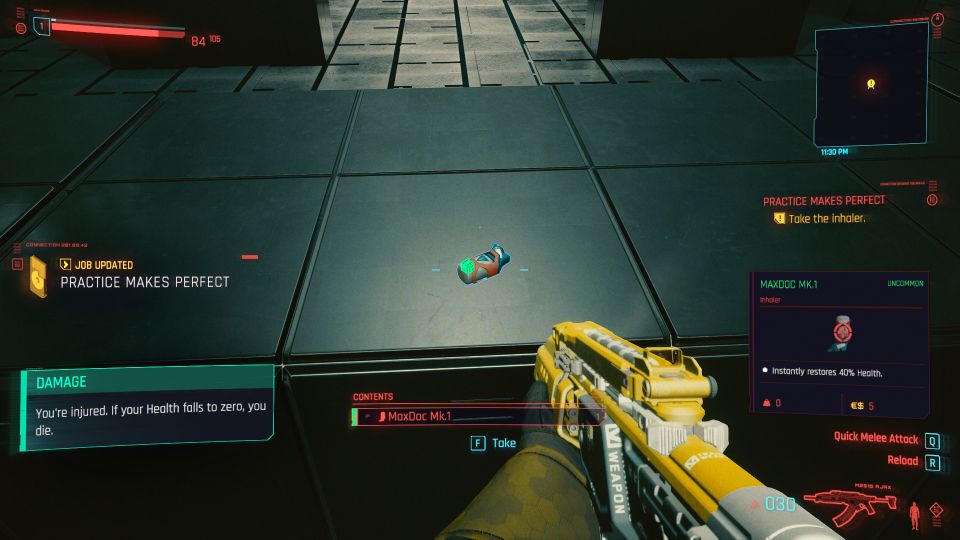 Next, you’ll learn how to take cover and you have to eliminate all of the moving enemies now. 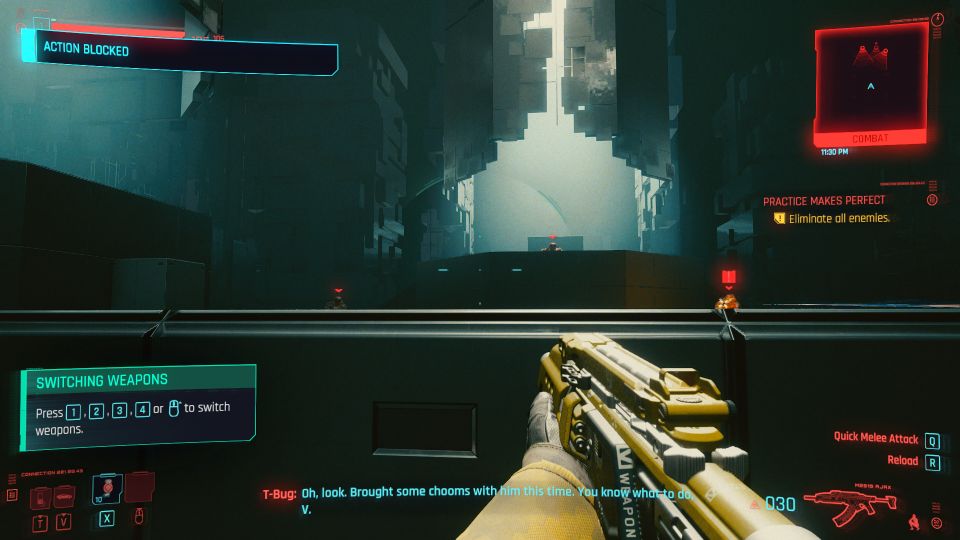 The second module is the hacking training module. 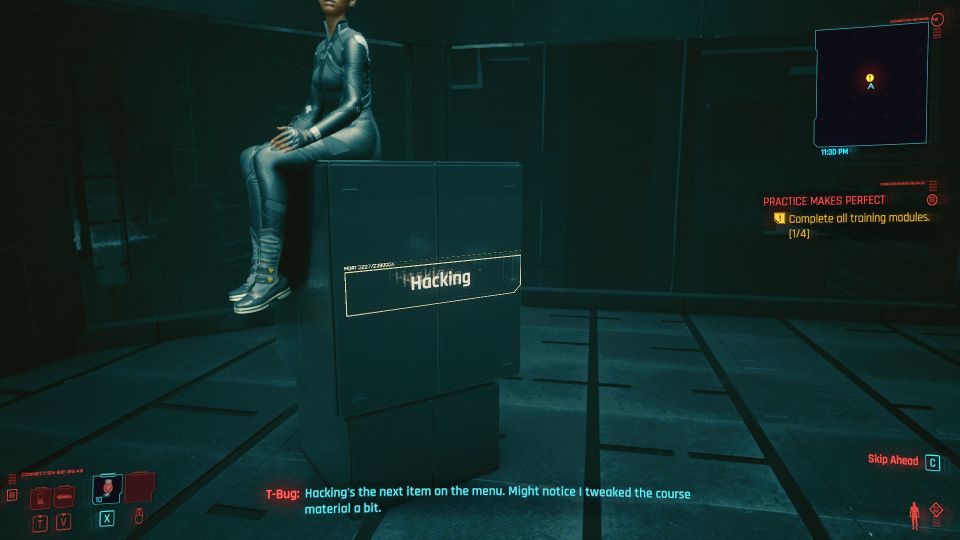 The first objective is to distract the enemy.

Just hack the wall behind him and choose “distract enemies”. 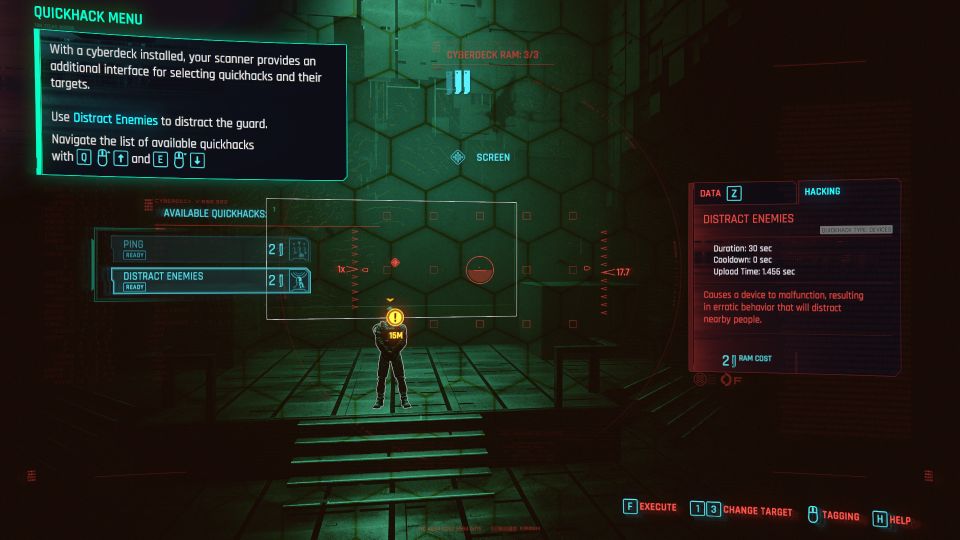 Once he looks behind, crouch and sneak up to him. Grab him and kill him. 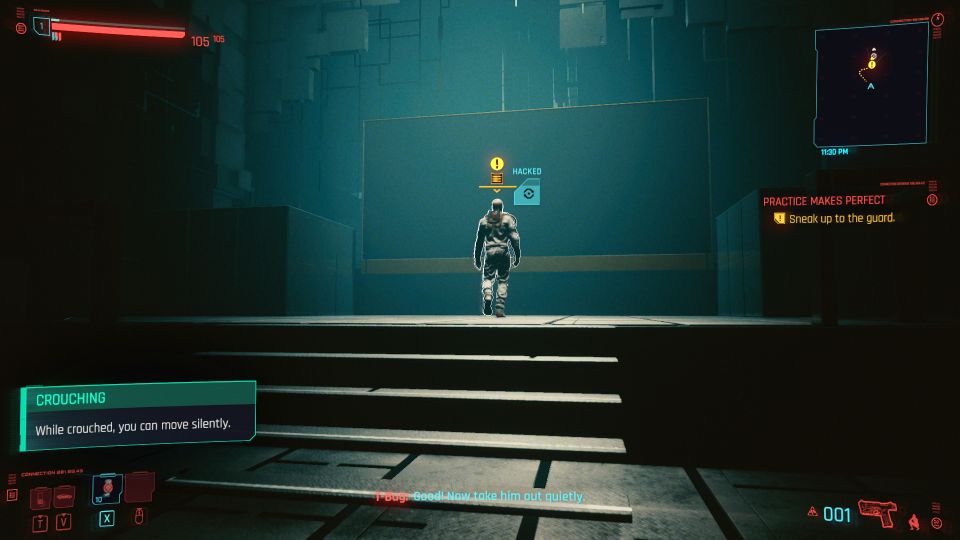 Throw the body in the dumpster. 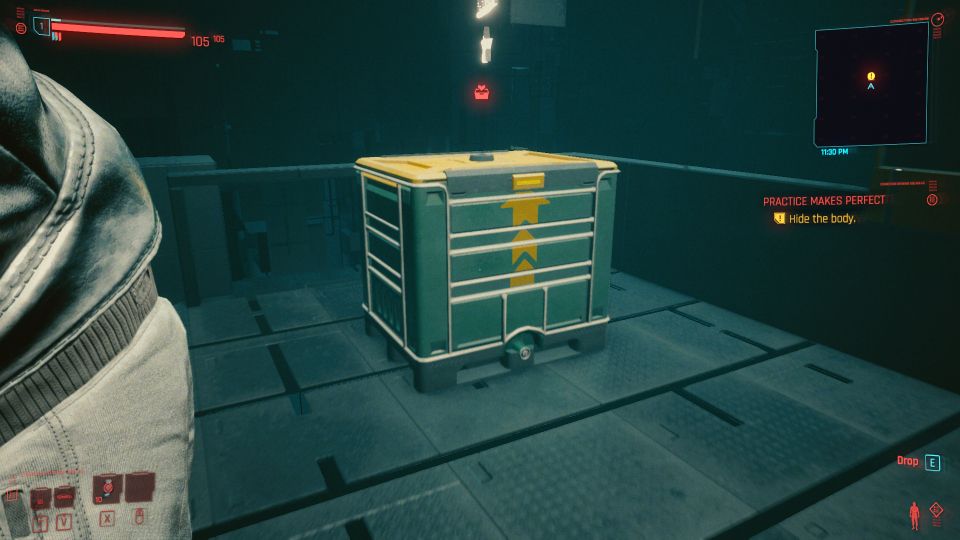 For the second part, you have to hack the camera control. 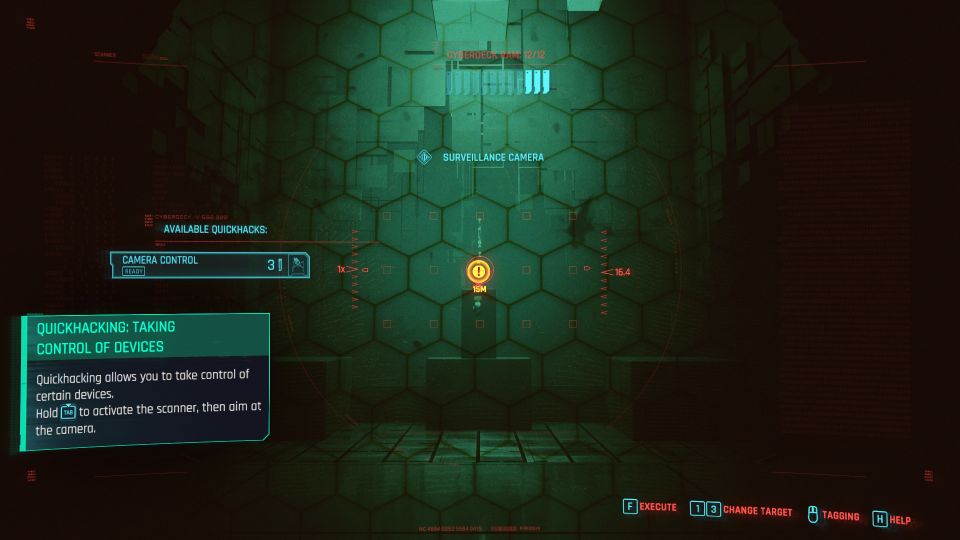 With the camera, you can view the two guards.

You’ll then be taught how to breach using the code matrix. 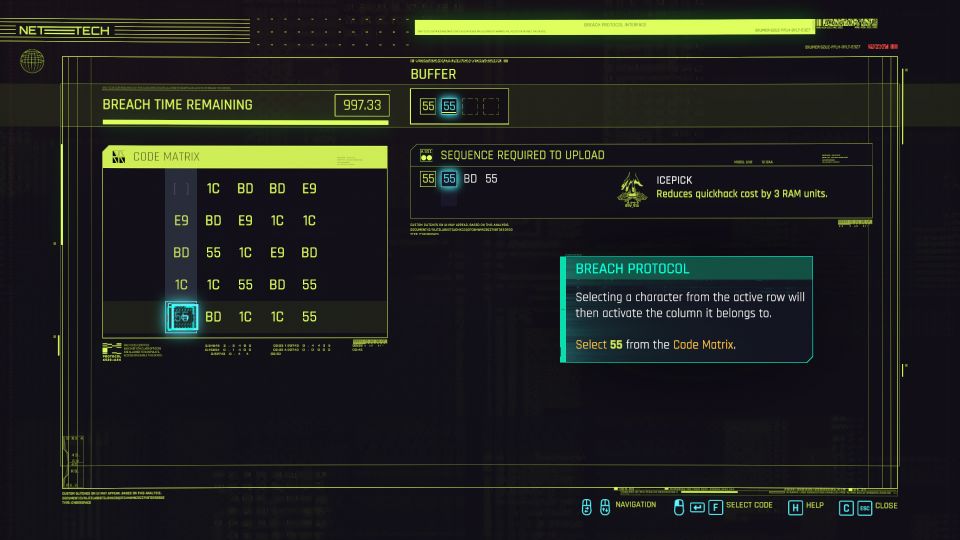 After breaching, you can detonate the grenade on one of the guards. 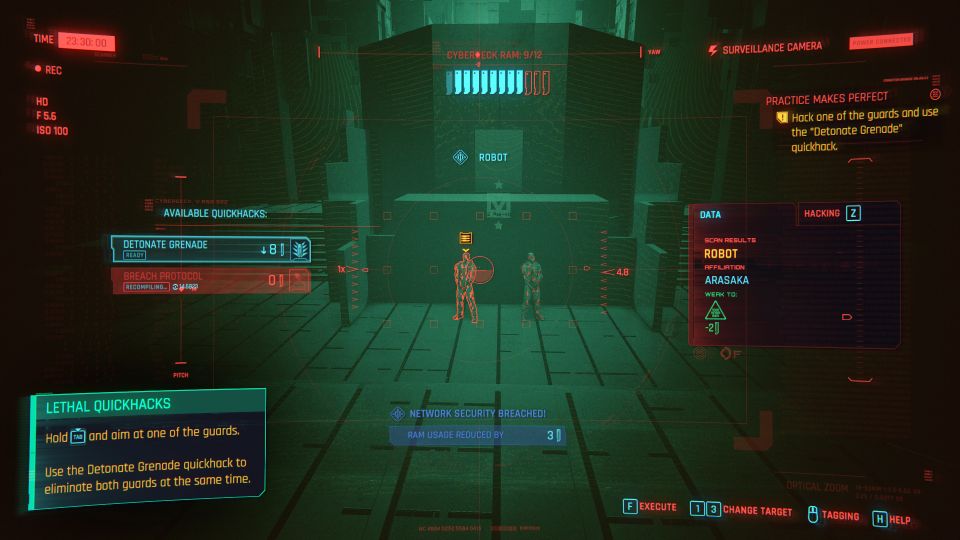 After completing combat basics and hacking, you can choose to leave the training.

Or you can just stay behind to complete the remaining two.

The third one is the stealth training. 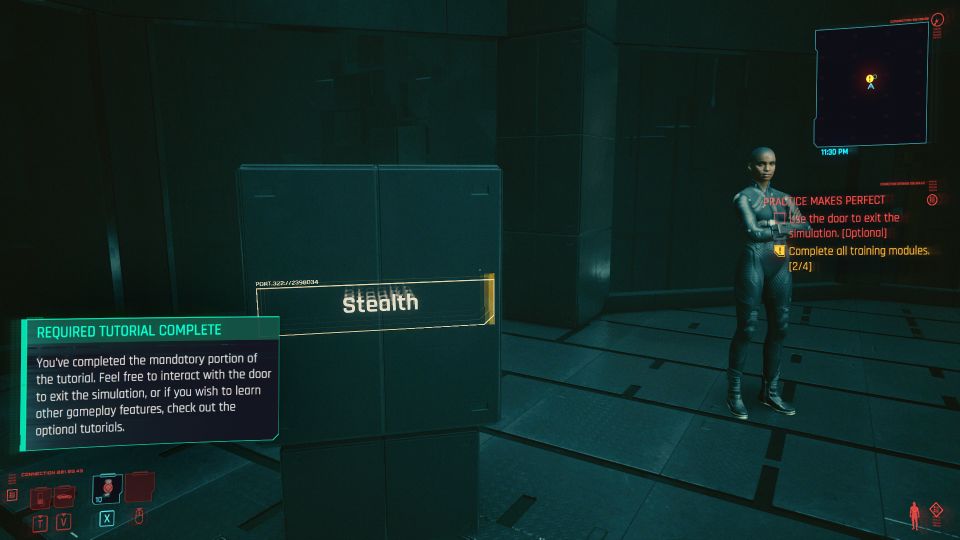 First of all, you need to learn how to tag the enemies. Tag all of them. 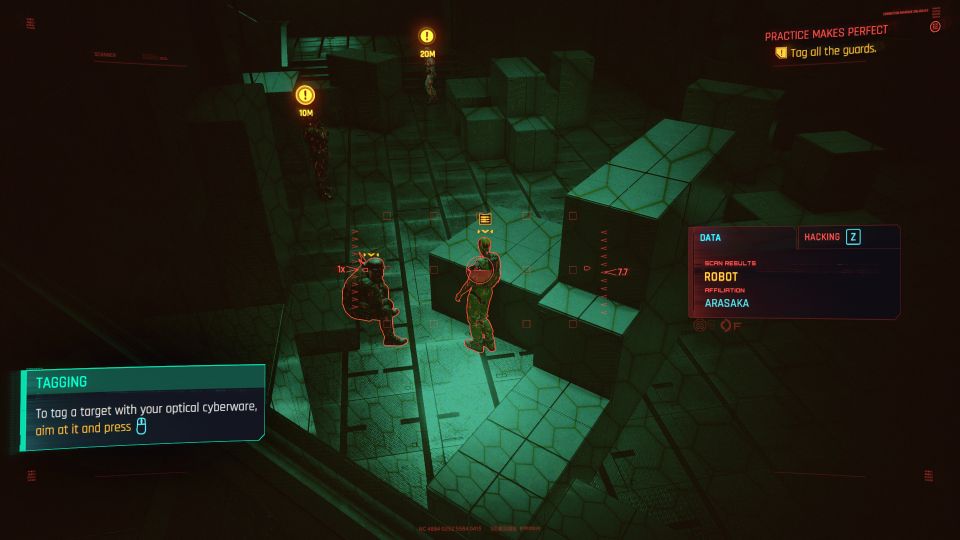 Then, you need to sneak past the guards to go to the exit. Use crouch.

Just move from one cover to the next, and the guard’s detection won’t reach the threshold.

After passing by the guard in the middle, just walk behind the last guard to reach the exit.

The next part is a camera stealth mission. Tag the camera. 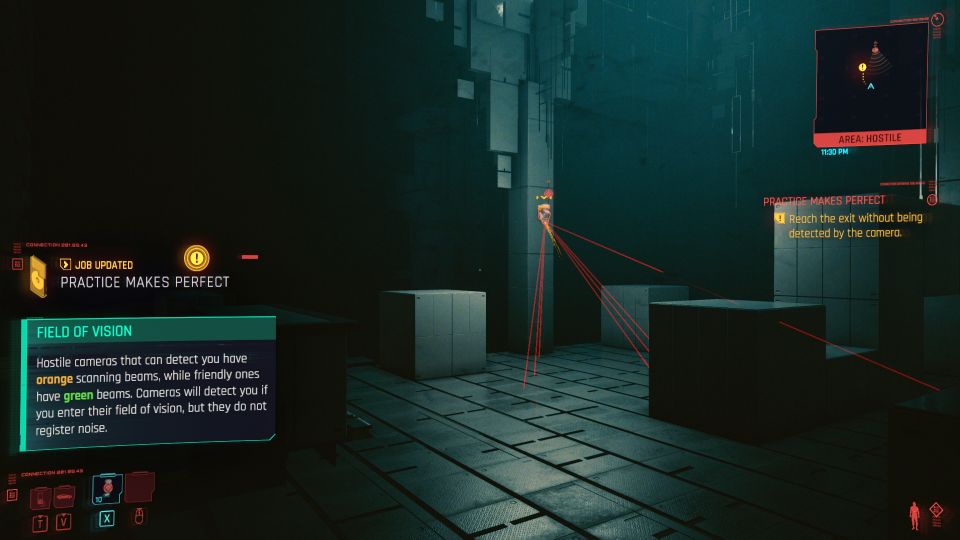 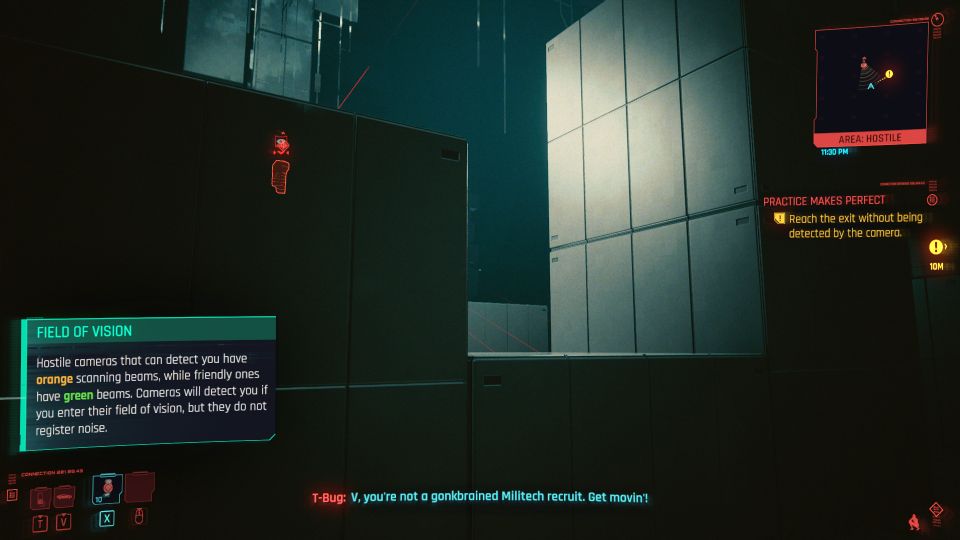 The last one is advanced combat. 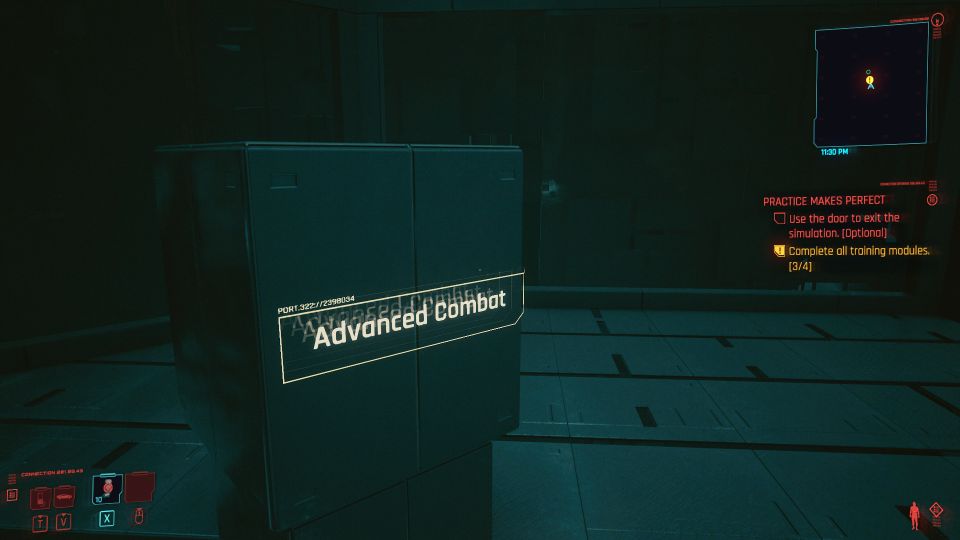 Crouch and sneak up to the enemy to grab him. 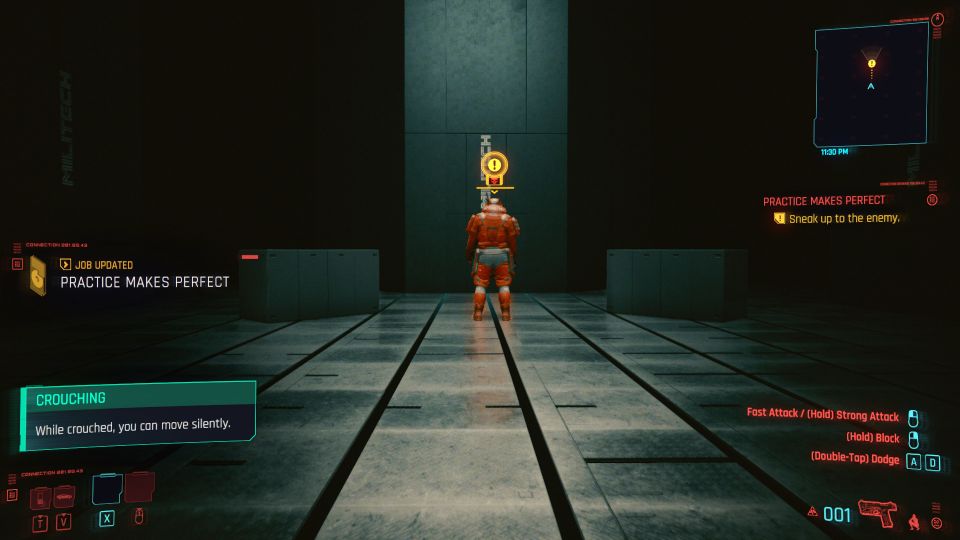 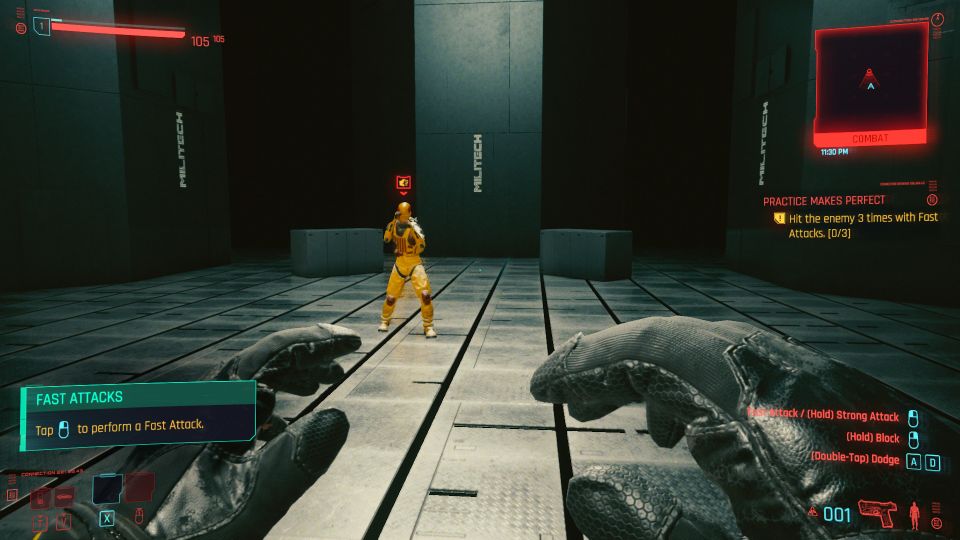 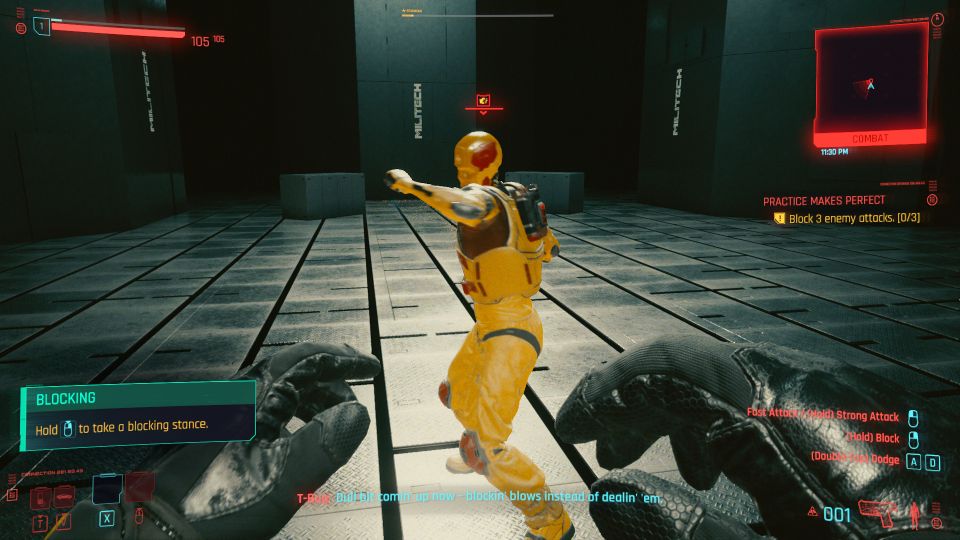 You will also learn how to use a melee weapon. You’ll be given a katana. 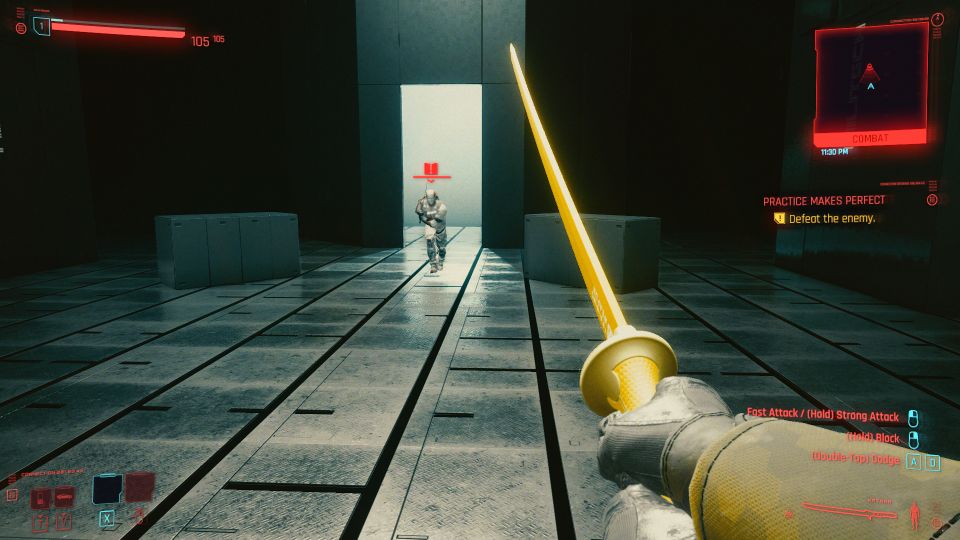 Finally, you have to defeat three enemies using guns, melee and whatnot. You can just shoot them all down. 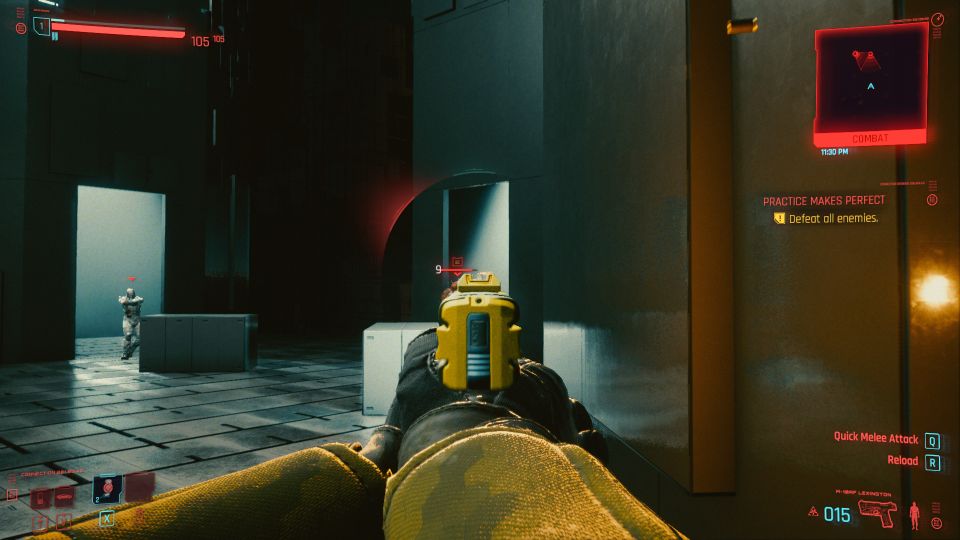 To complete the side mission, use the door to exit simulation. This is after completing all four modules. 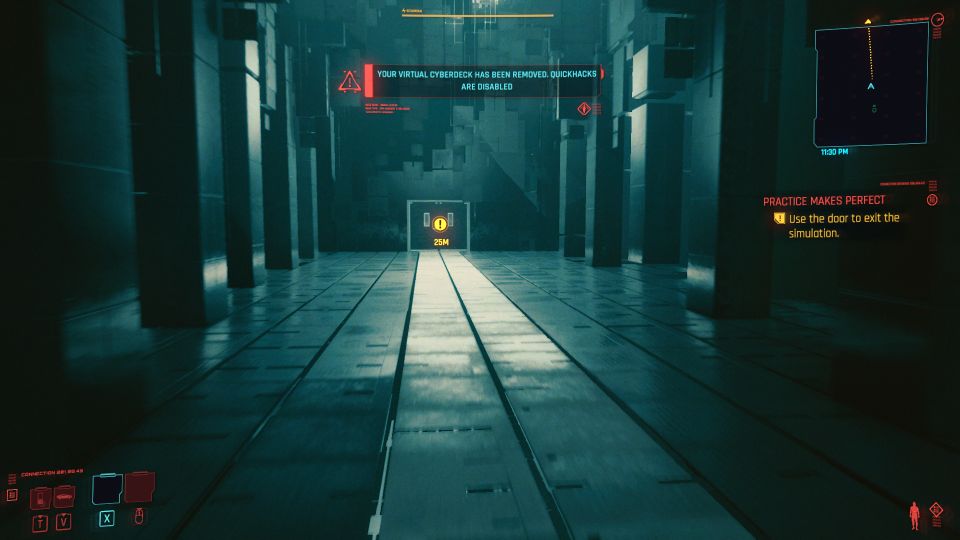